The Watermill Center presented a number of interactive and provocative art installations at its annual benefit and dinner, despite the rapper's last-minute cancellation.

While Kanye West was a last-minute no-show—both he and the center cited “artistic reasons” for the cancellation—the Watermill Center still managed to draw hundreds of guests to its 23rd annual benefit and dinner. A highlight of the Hamptons art and social scenes, the July 30 soiree lived up to its see-and-be-seen reputation by raising $2 million via record attendance and ticket sales.

In a tony beach community idealized by white picket fences and oceanfront mansions, there is no place quite like the Watermill Center—where guests can walk through eight-and-a-half acres of a bamboo-filled forest filled with a series of Stonehenge sculptures, poke fun at Donald Trump as selfies are taken in front of an electric chair, watch a series of ritualistic sex acts on closed-circuit television, walk through a phalanx of gilded trees, or meander through lighted car bumpers. All of that, and more, was experienced by the 1,200 people who made their way through the 24 installations that followed this year’s “FADA: House of Madness” theme, inspired by Le Corbusier's Cité Radieuse in Marseille, France—which Wilson cites as major influence on his vision for the Watermill Center and its community of artists and visionaries.

While the entrance—which was re-situated in 2015 with a new, more immersive pathway—remained the same this year, the flow changed, as it does every year, to “best show the grounds and the installations and to keep it new for our guests who continue to return each year,” Herget said. “It is also about finding the perfect placement on the grounds for the installations that are created each year in order for the audience to best experience them, but also to direct the audience in a certain direction.”

For the benefit, the Watermill Center collaborated for the first time with artist collective Bruce High Quality Foundation to present “As We Lay Dying,” a variety of works and performances interspersed throughout the center’s grounds. The art is meant to be a reflection on coming to terms with the contemporary world through personal, political, and aesthetic perspectives.

Following cocktails—where many sipped the evening’s signature cocktail, Maestro Dobel’s Black Diamond Margarita—685 guests stayed for dinner. The program featured a lively auction called by Simon de Pury, where portrait commissions from Inez and Vinoodh, Nan Goldin, and Peter Lindbergh were up for grabs. Later, there was a performance by Norwegian artist Tori Wrånes.

As for West, the center said he’s slated to perform next year. 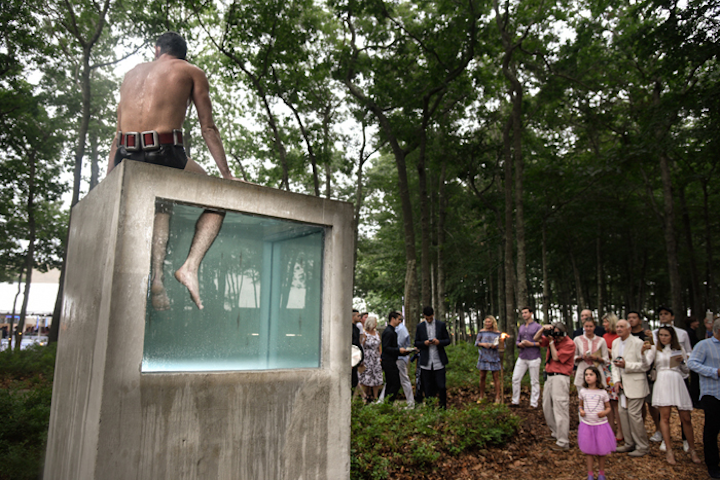 One of the most Instagrammed moments of the night, John Margaritas's "One Ton Tank" featured a hand-poured concrete tank filled with water. The tank's windows created "an almost prismatic light effect" as a performed in a black speedo performed while being weighed down with weights.
Photo: Gustavo Ponce for BizBash 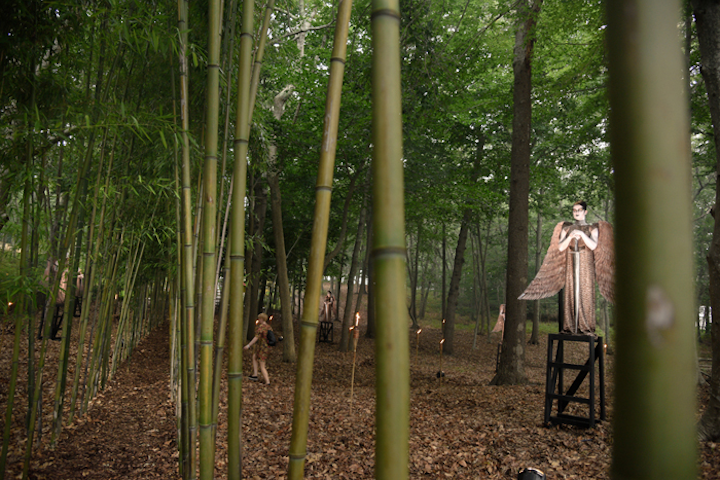 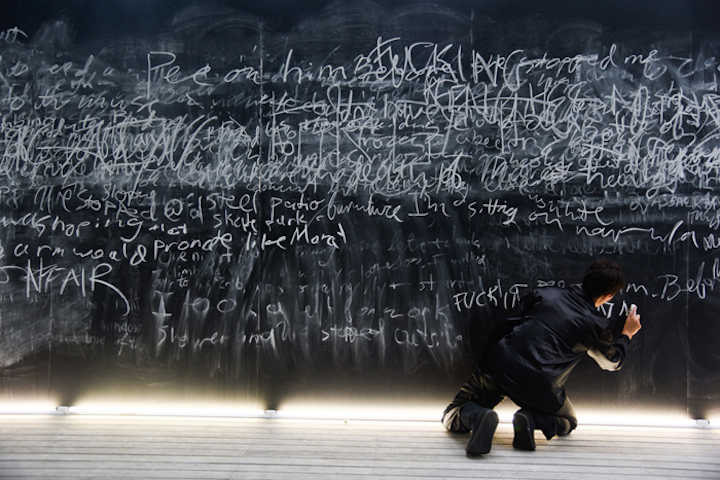 The Bruce High Quality Foundation's "As We Lay Dying: Lecture Notes," featured twice throughout the walking path, was the only interactive installation on the grounds. Characters on hand recited words on the expansive chalkboard, and guests could also contribute their own notes, messages, or sayings. The chalkboards, set up on raised wooden platforms with seating areas, also served as a palette cleanser of sorts during the tour.
Photo: Gustavo Ponce for BizBash 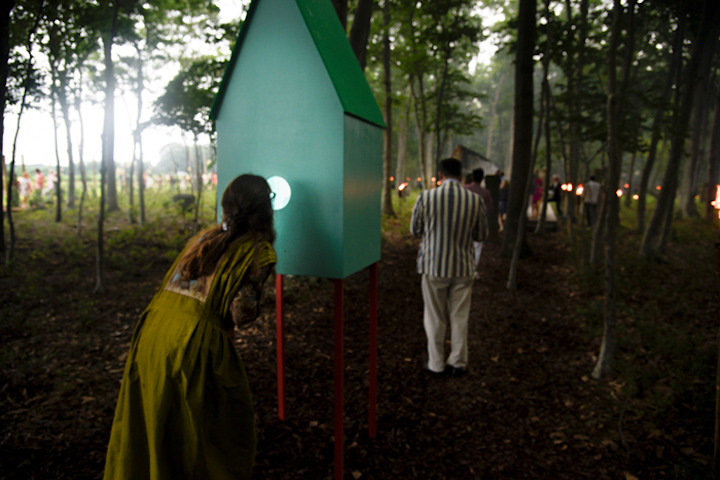 Dubbed "House," a Christopher Knowles installation comprised four birdhouses placed throughout the woods. Each had a peephole wherein one could find paintings by the artist.
Photo: Gustavo Ponce for BizBash 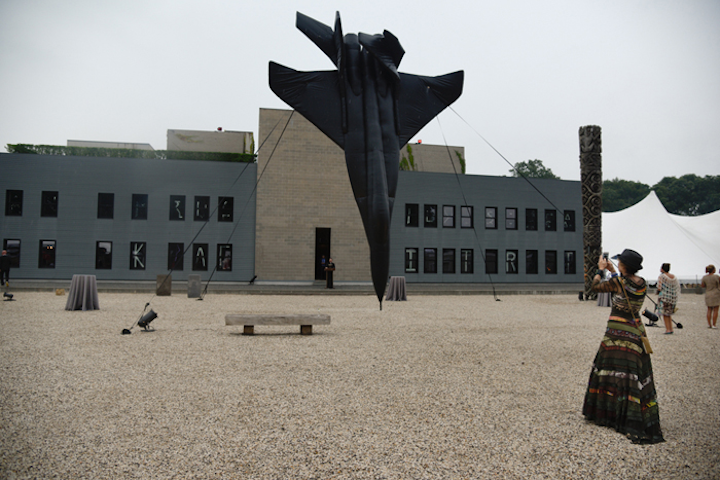 Located on the graveled west terrace was the Bruce High Quality Foundation's towering, 35-foot inflatable MIG fighter jet. The installation, called "A Smack and Then Nothing," as meant to project a sense of breathing despite being nose down, frozen in a point of contact into the earth. Surrounding the inflatable were performers on six high-backed platforms.
Photo: Gustavo Ponce for BizBash 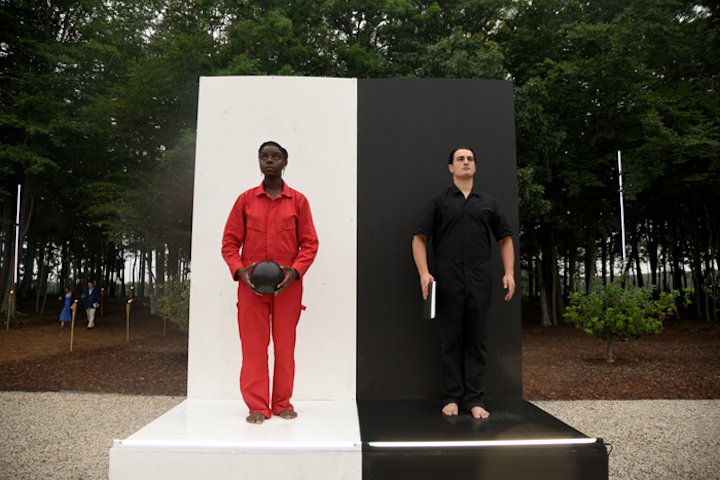 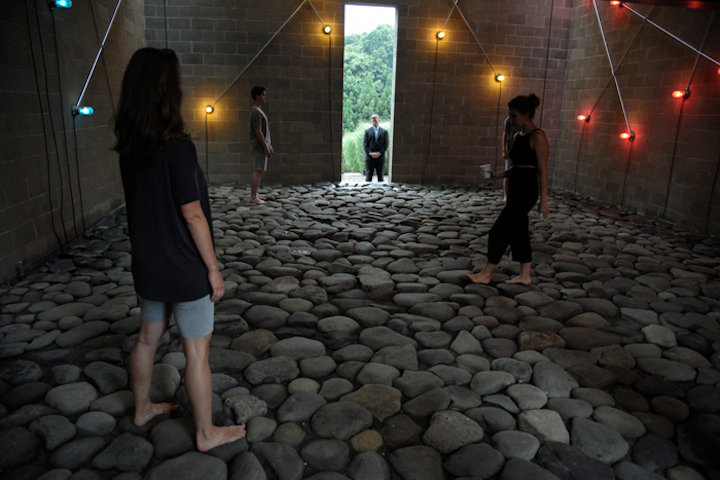 Two installations, both by G.T. Pellizzi, were combined inside the primary entranceway of the Watermill Center's main building. "Constellations in Red, Yellow and Blue" was featured on the walls, complementing the Bruce High Quality Foundation's "As We Lay Dying: Singing Quartet" of performers. The former featured light sculptures derived from invented cosmologies inspired by symbols found on many textiles in the Watermill Collection, while the latter featured singers rhythmically singing and breaking up the texts that have been ringing throughout the grounds.
Photo: Gustavo Ponce for BizBash 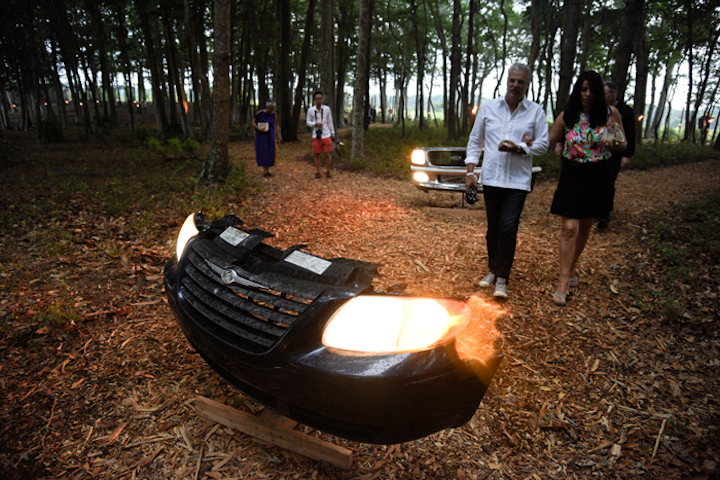 The foundation’s ”As We Lay Dying: She Would Come Up With Reasons" had guests meander through a field of amputated car headlights that were oscillating back and forth. Lined up facing guests and the "One Ton Tank" installation, different models of skeleton-like cars blocked the pathway and shone through the trees at dusk.
Photo: Gustavo Ponce for BizBash 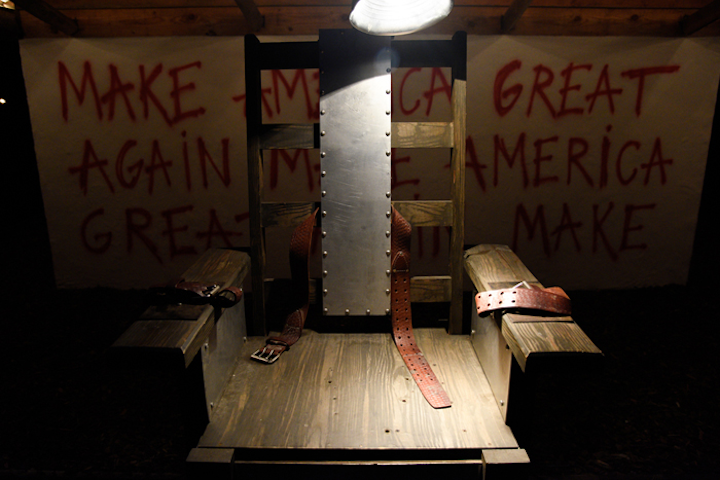 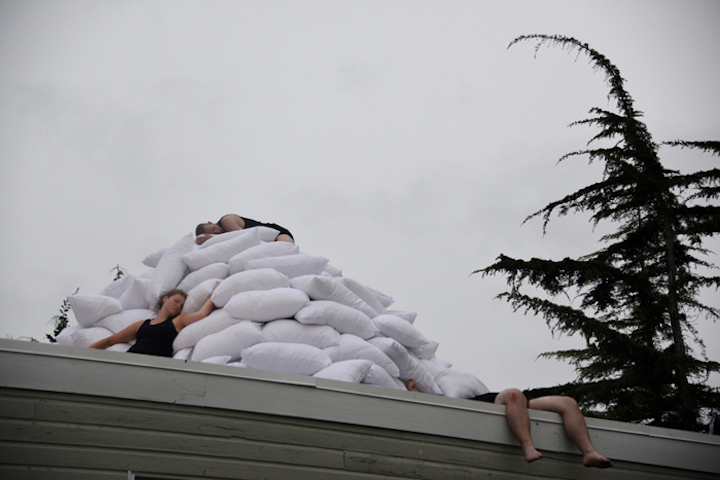 Brian O'Mahoney's "Cats Sleep Anywhere" installation represents the artist's fourth time returning to the benefit. It showcased three performers climbing up and through a mountain of pillows atop one of the property's original south-facing sheds.
Photo: Gustavo Ponce for BizBash 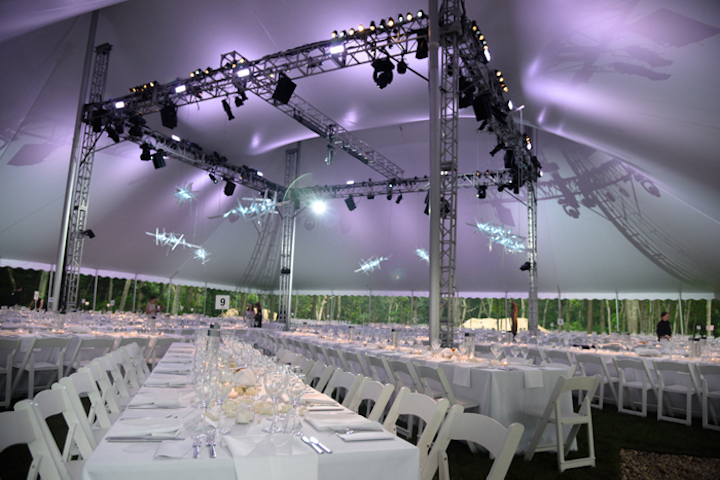 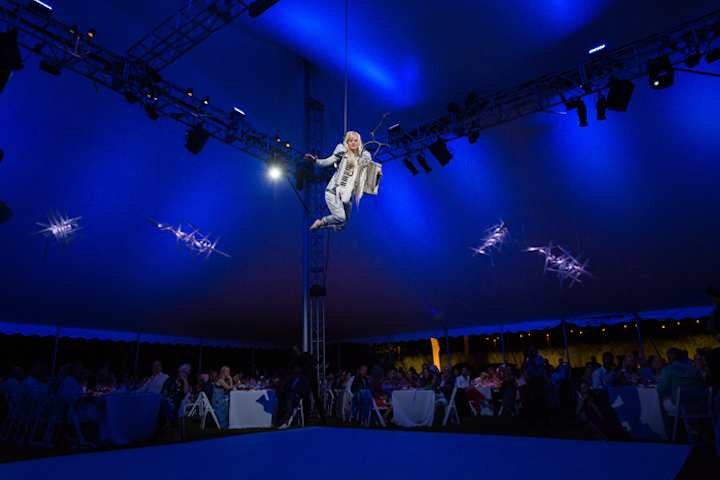 Dinner concluded with a performance by Norwegian artist and vocalist Tori Wrånes, who dazzled guests while suspended from the ceiling. It was followed by a dance party with DJ Mia Moretti featuring an impromptu, surprise performance by Ja Rule.
Photo: Billy Farrell Agency/BFA
More in New York City & Tri-State Area