Here's a look at what's on tap for the Toronto International Film Festival. 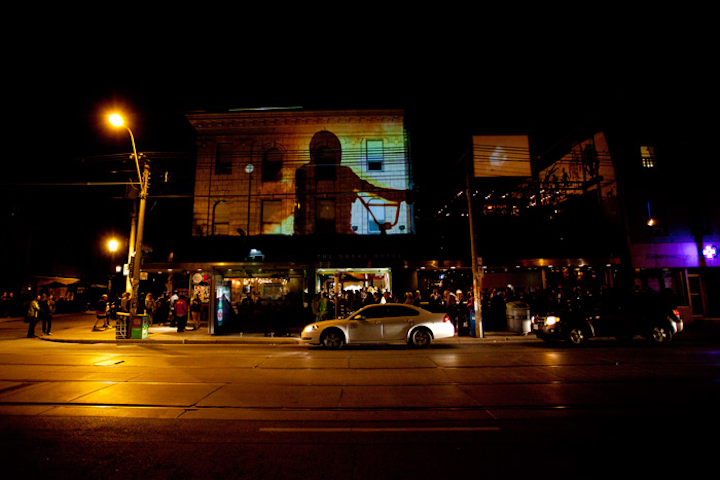 The Toronto International Film Festival takes place September 10 to 20 this year, and the Drake Hotel (pictured during the 2013 festival) will once again host related events.
Photo: Jeremy R. Jansen

The Toronto International Film Festival will celebrate its 40th anniversary with a 10-day run starting September 10. With the milestone event on the horizon, brands, publicists, and others are gearing up for a slew of events peopled with producers, directors, actors, and other big-name guests. With more than 300 films filling the festival's official lineup, scheduling is an important component of event organizers' roles. Here's a look at how events will play into the crowded festival schedule, which new events are coming up, and what brands and organizers are doing to stand out.

Before the official start of the festival, the new TIFF Soiree will take place on September 9 at the TIFF Bell Lightbox, which opened in 2010 and centralized much of the festival programming. The 550-guest charity event, targeted at top festival donors, will feature a live Q&A session with actress and guest of honor Natalie Portman. The night will also offer cocktails and musical entertainment—the four-woman group Devah—wrangled by the Idea Hunter.

Mongrel Media, Canada’s independent film distributor, will also host a new event. The Mongrel House event series, scheduled for September 10 to 16 at the Campbell House Museum, will feature nightly programming including live music and DJ sets, a beer garden serving artisanal snacks, a karaoke room, a ping-pong lounge, and a professional makeup studio. Esther Garnick PR is assisting with publicity for the new happening, and sponsors include L'Oréal Paris, Holt Renfrew, and Canada Dry. L'Oréal Paris is one of several beauty brands hosting activations throughout the festival, and beauty brands are particularly prevalent at gifting suites.

Esther Garnick PR will also host its Essentials Lounge on September 9. The lounge invites members of the media to pamper themselves before TIFF's onslaught of events and will feature activations from sponsors such as Cake Beauty, Clarins Fragrance Group, Dior Beauty, Krispy Kreme, and SkinCeuticals. “It is so important that we create an experience worth remembering at the Essentials Lounge. If, together with our brand partners, we can create a bit of a pre-TIFF oasis for the hardworking press going out there to do their jobs, and arm them with products and services to make it more enjoyable, we are delighted to do it," Garnick says of the six-year-old event.

Other returning gifting suites include NKPR's IT Lounge Portrait Studio in Partnership with W magazine, which celebrates its 10th anniversary this year. Intended as a spot for celebrities to unwind during the festival, the event will run from September 10 to 20 at the TIFF Bell Lightbox. In the lounge, photographer Caitlin Cronenberg will snap portraits, and sponsors such as Barilla, Saje Wellness, and Cross pens will display and give away their wares. The lounge will also host a restaurant showcase, hosted by Barilla and featuring pasta recipes from restaurants such as East Side Mario's.

Also entering its 10th year, the Tastemakers Lounge will be held September 10 to 15 at the InterContinental Toronto Centre. New to the lounge this year, Elle Canada will host an interactive portrait studio; Sorel, the other title sponsor, will host an on-site boot shop. According to Debra Goldblatt-Sadowski, president and founder of Rock-It Promotions and the Tastemakers lounge: "It's important to offer a refuge from the madness. We always try to offer a calm space where people have fun." Goldblatt-Sandowski co-founded the lounge in 2005 with Leesa Butler, vice president of operations for Tastemakers and founder of Divine Lab.

Now in its seventh year, Bask-It Style presented by Glo Communications will be headquartered at the residences above Shangri-La Hotel Toronto. Throughout the festival, lounge staffers will hand-deliver personalized gift bags to the hotels where celebrities are staying. Some of this year’s sponsoring brands include Neutrogena, Green & Black’s Organic, and Balkan Steakhouse.

Apart from offering gifts, local restaurants are cashing in on the TIFF buzz by hosting promotions, and offering themed menus, of their own. For instance, Montecito Restaurant—which is kitty-corner to the TIFF Bell Lightbox—will be celebrating its first anniversary this month. Along with playing host to festival after-parties, the venue has curated a special menu that nods to TIFF's 40th anniversary. Items will include popular cocktails from 40 years ago.

The Drake, a popular event venue for the past several years, will return as an event host this year. Happenings in the hotel's lineup include a launch party on September 10, with sponsors including Absolut and Jameson. With DJs positioned on each of the venue's three floors, the edgy event will also offer free real tattoos by Speakeasy Tattoo and nail art by Pinky’s Nails.

Another major food-driven event will take place on September 13, when the Canadian Film Centre hosts a barbecue with film-industry backing: sponsors include Corus Entertainment, A&E, Cineplex, Netflix Canada, and Shaw Media. The bash, hosted at the institution's Bayview Avenue headquarters, will offer casual snacks from eateries such as Holt’s Cafe and Pizzaville; there will also be drinks provided by Crystal Head Vodka, Mill Street Brewery, and Flow Water. The event benefits the film center, and there are several more charitable initiatives set to take place throughout the week.

On September 11, the fifth annual Producer’s Ball, presented by Scotiabank, will take place at the Royal Ontario Museum. The event will feature a silent auction with proceeds benefiting TIFF, and the Idea Hunter has tapped magician and mentalist Yan Markon to perform. Another benefit, Artists for Peace and Justice, will take place at Casa Loma on September 13. Presented by Bovet 1822, the benefit will raise money for its namesake organization, which was founded by writer and director Paul Haggis.

To wrap the festival on September 19, a closing-night gala will take place at the Arcadian Court. Canadian musician Sara Simms will perform, and Idea Hunter will bring in a mirror photo booth that lets guests snap pictures wearing different virtual outfits.

Correction: The original version of this story has been updated to clarify where Bask-It Style will take place.