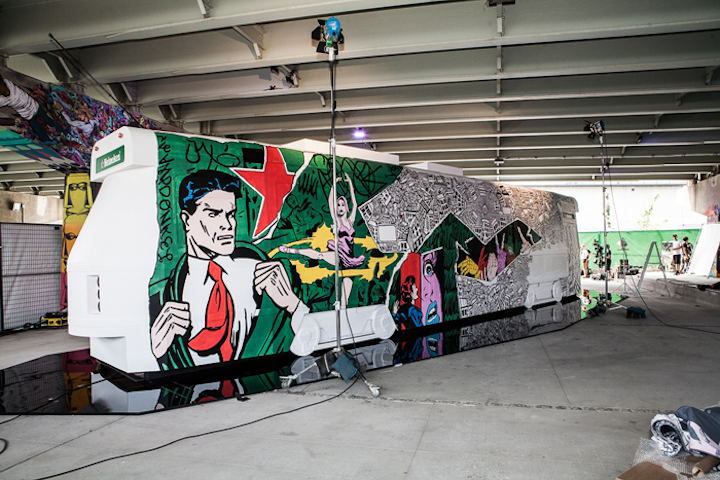 Imported beer brands and street art usually don't go hand in hand, but Heineken recently managed to incorporate local art into one of its latest consumer events. As part of the Dutch beer brand's new global marketing campaign, Heineken took over the Underpass Park in Toronto on July 21 to celebrate all things street art and the city.

The event, which was produced by SDImktg, brought together three notable street artists—Jimmy Chiale, Whatisadam, and Hey Apathy—to use Heineken's color palette as their inspiration and leave their mark on three Toronto streetcars. “We wanted attendees to leave feeling like they not only witnessed, but also contributed to, shaping the city of Toronto," says Graham, as each artist created his own one-­of-a­-kind piece of artwork on­site.

Commuters will see these pieces of art transformed into moving works as they become Toronto Transit Commission streetcar wraps. “Throughout the month of August, active streetcars will feature the pieces the artists did, which have been turned into a graphic,” says Graham.

While the Heineken City Shapers initiative is also going to Hong Kong and Thailand, the concept of City Canvas was entirely unique to Toronto. "As part of the Heineken initiative we hope that even the smallest acts can transform or shape your city,” says Graham. The event also featured a performance by Kardinal Offishall and catering by Parts & Labour.

The campaign was conceived by Kinship, which is part of Kyu, a New York­-based collective of creative companies.