Get to know these essential venues in or near the city’s core. 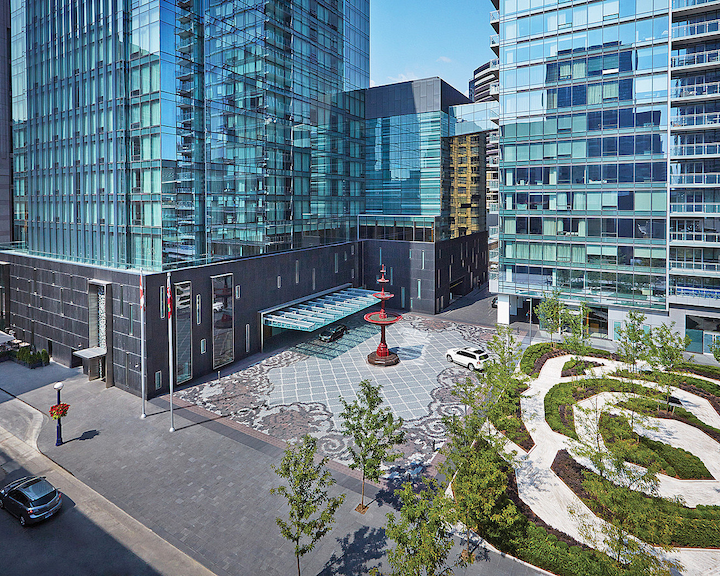 TORONTO—As Canada’s largest city, Toronto has no shortage of top-notch venues for conferences, trade shows, parties, and other celebrations, large and small. Here are our picks for nine no-fail venues every event planner should know about, from 100-plus years old to just a few years young. 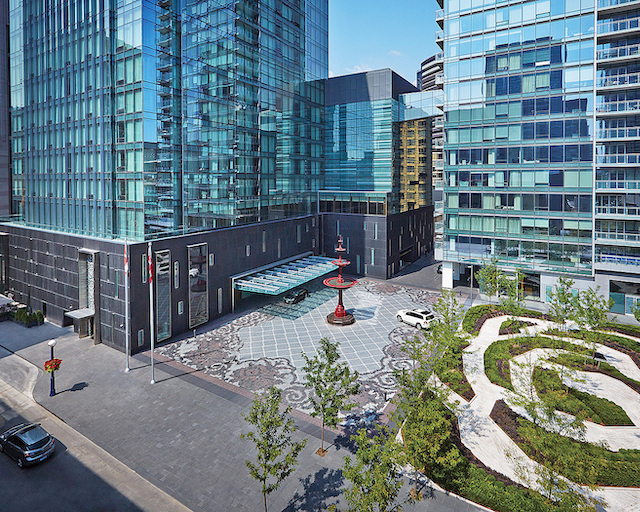 2. The gorgeous Carlu is one of Toronto’s best examples of Arte Moderne and is a national historic site. Located on the seventh floor of what was the department store Eaton’s flagship shop, the original 1930 venue was shuttered for decades before being extensively renovated and reopened in 2003. The Carlu offers four distinct event spaces, including the Concert Hall, with a stage and a balcony, which can seat 600 guests or accommodate 1,500 for a reception, and the Round Room, which seats 300, boasts a Lalique fountain at its center and is said to have inspired the iconic Rainbow Room at Rockefeller Center in New York. 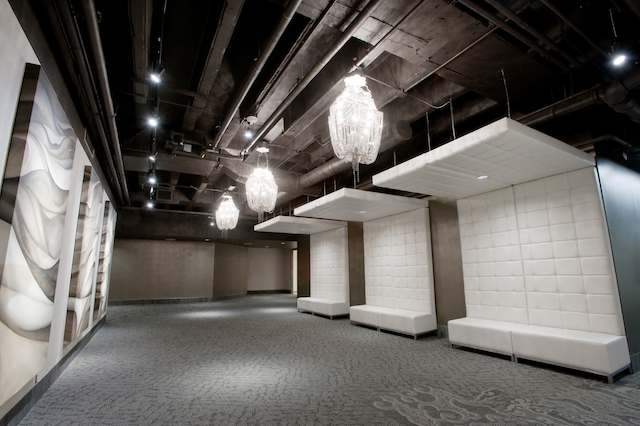 3. Art Deco gem Arcadian is located on the eighth floor of the historic Hudson’s Bay department store building right on Yonge Street in the downtown core. Part of the Oliver & Bonacini entertainment and catering group, the venue includes the Arcadian Court, which accommodates 450 guests in banquet seating, as well as the Arcadian Loft, with room for another 300 seated guests, and the kitchen studio, for 30. Majestic chandeliers hang from the vaulted ceilings, and windows provide spectacular views of both old and new City Halls. 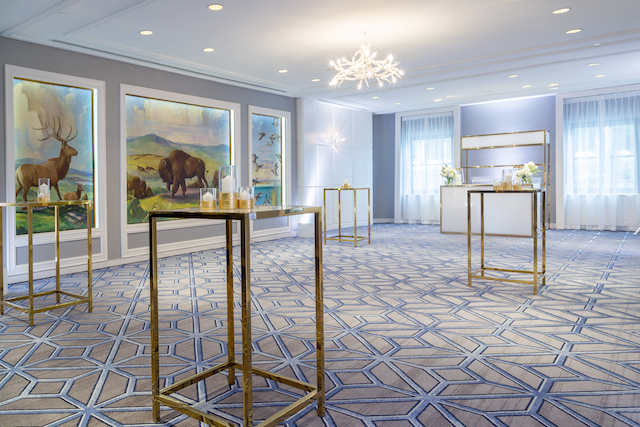 4. One of Canada’s grand railway hotels, the Fairmont Royal York was, at one time, the tallest building in the British Empire. Today, the 90-year-old building is nestled among the city’s modern high rises and located across the street from the Union Station transit hub. The 28-story hotel provides nearly 13,000 square feet of elegant meeting space, from the massive Canadian Room, which accommodates 1,260 in banquet seating or 1,670 for receptions, to the provincially theme meeting rooms on the mezzanine floor. The entire hotel is undergoing renovations, with design reflecting a modernized Art Deco look. The finished lobby debuts in the spring.

5. Home to the N.H.L.’s Toronto Maple Leafs and the N.B.A.’s Toronto Raptors, the newly renamed Scotiabank Arena is in the downtown core, close to transit hubs and highways. The 665,000-square-foot arena opened in 1999 and has won multiple industry awards for security, accessibility, and environmental commitment. Nicknamed the Vault, the arena is home to the Real Sports Bar & Grill, which was voted the No. 1 sports bar in North America by sports broadcaster ESPN and boasts a 39-foot TV and a 3-D golf simulator. Also on site is the Molson Brewhouse, which seats 300 guests and has a microbrewery. 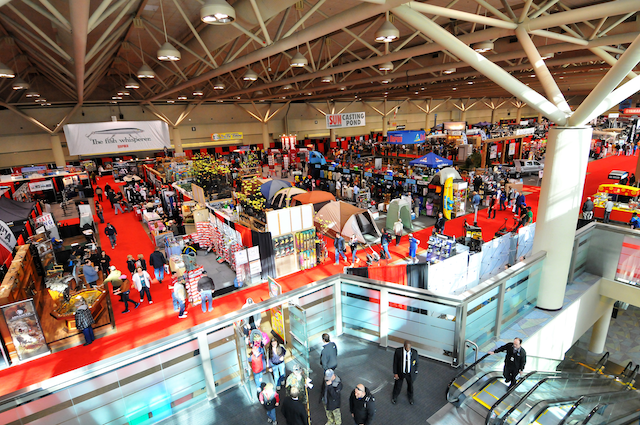 6. Metro Toronto Convention Centre, Canada’s largest convention facility at more than 2 million square feet, is home to conferences, trade shows, and galas of all sizes. In total, the versatile facility includes seven exhibition halls, 77 meeting rooms, two ballrooms, and a 1,232-seat theater. The north side, which opened in 1984 and adjoins the InterContinental hotel, has a 182,000-square-foot exhibit hall that accommodates 10,400 people in banquet seating, while the south side, a linked facility across the railway tracks, has almost 260,000 square feet of exhibit space. For car commuters, the venue offers 1,700 indoor parking spots on site.

7. Located at Exhibition Place—a 192-acre waterfront complex for sports, festivals, exhibitions, and trade shows—the Enercare Centre measures more than 1 million square feet. The main exhibition hall covers more than 358,000 square feet with a capacity for 1,826 booths or 12,500 visitors. The LEED-gold certified venue, which opened in 1997, is bright and modern and includes parking for almost 7,000 vehicles, both on the surface and underground. In 2019, the venue embarked on a six-year plan to increase accessibility for disabled visitors by identifying barriers on site and diminishing or removing them. 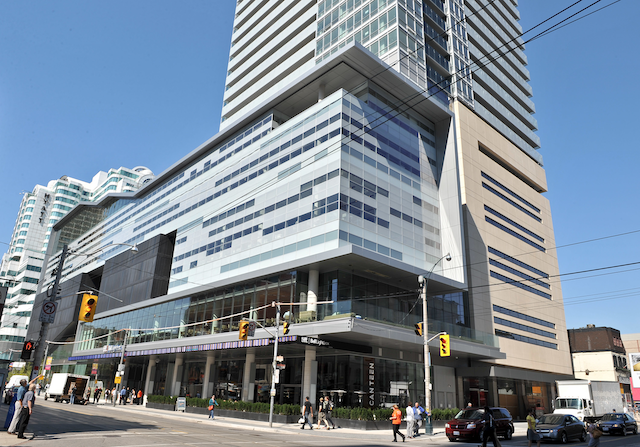 8. Located in the center of Toronto’s media and entertainment worlds, the TIFF Bell Lightbox is the home to the famed Toronto International Film Festival and countless other events, big and small, throughout the year. For receptions and meetings, the Founders Lounge offers the most space, with capacity for 120 mingling in the elegant room overlooking King Street. The Green Room, with decor by Roots and a capacity of 60, has a 40-inch programmable screen, a state-of-the-art audio system, a projector, and ensuite washrooms. For screenings, performances, and award shows, Cinema 3 seats 523 viewers and accommodates 3-D, 35mm, 70mm, and digital screenings. 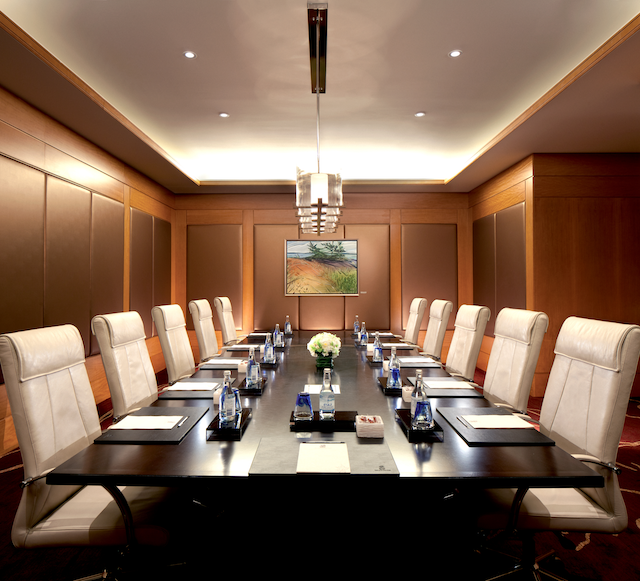 9. Located near sports venues and performing arts locales, the Ritz-Carlton, Toronto immediately elevated the elegance factor in the entertainment district when it opened in 2012. The 53-story tower boasts a sleek glass façade and a collection of 400 pieces of art specially commissioned from across Canada. The two floors of meeting and event space include a luxury ballroom with space for 500 in rounds of 10, an executive boardroom, and the grand foyer, with floor-to-ceiling windows and capacity for a 400-person reception.

A version of this article originally appeared in BizBash Best 2019—Downtown Toronto.