As part of our Best of 2010 look back at the last year, we asked our local editors to share their—admittedly subjective—take on the most important things to happen in their markets this year. Here's what Toronto bureau chief Susan O'Neill had to say.

1. The Interior Design Show, Reimagined
Presented by Merchandise Mart Properties Inc., this show returned to its original home at the Metro Toronto Convention Centre after several years at the Direct Energy. Show creator Shauna Levy credits the move with attracting greater numbers (attendance increased from 45,000 to 48,000) and a more astute audience. Levy also leveraged the show to launch the inaugural Toronto International Design Festival in January. Presented by Rado and Audi, the citywide festival ran for four days with 20 events taking place in venues like the Royal Ontario Museum and the Design Exchange.

2. A New Home for TIFF
TIFF Bell Lightbox—the new home to the Toronto International Film Festival—opened during the festival's opening weekend with a V.I.P. gala for 1,800 guests on September 11 and a public street party the following day. Designed by KPMB, the venue has a three-storey public atrium, five public cinemas, two galleries, and three learning studios. Bell Lightbox expects to host 4,000 community and industry events per year. In the entertainment district at the corner of King and John streets, Bell Lightbox also houses two new Oliver & Bonacini restaurants—O&B Canteen and Luma—and an independent event space (operated by the restaurant group) called Malaparte.

3. Luminato's iPhone App
For the fourth installation of the Luminato Festival of Arts + Creativity in June, festival organizers introduced the Luminato Apple iPhone App—developed and powered by CheckPoint Events—to help festival goers plan their experience. The app combined an event guide, location-based services, and elements of social networking. The application simplified the festival experience by providing the planning and organizational tools offered through luminato.com via the My Luminato feature, and allowed users to pinpoint which events were closest to them by using the built-in "nearby" GPS locator.

4. An Ambitious New Event
On November 20, the top 50 fund-raisers at the Chef’s Challenge for a Cure—a benefit planned by Solutions With Impact in support of Mount Sinai Hospital—had the chance to show off their culinary skills and cook alongside Gordon Ramsay at the Carlu. Participants created a three-course meal under Ramsay’s watchful eye, and the top 25 fund-raisers attended a brunch hosted by the celebrity chef. The inaugural event drew a crowd of 500 and raised more than $1.1 million for the hospital.

5. Innovative Lighting at the TIFF Bell Lightbox Opening
To set the scene for the opening-night gala at TIFF Bell Lightbox in September, Westbury National Show Systems collaborated with Barbara Hershenhorn of Party Barbara Co. to design an extensive lighting installation and multiple video projections that illuminated the intersection of King and John streets. Westbury used six high-end Showgun lights to light up the skyline and six moving-head LED fixtures to light up the Lightbox. An additional seven Christie digital projectors projected a combination of film clips and video wallpaper onto the surrounding office and condo towers. To light up the buildings along King Street, Westbury used 26 high-end studio beams and 24 LED fixtures. The C.N. Tower was also lit in TIFF colours throughout the evening.

6. Lexus Engages With iPads
For the world debut of the new luxury hybrid vehicle, the Lexus CT 200h, Lexus Canada showcased two early prototypes of the car—and staged a concert series with performances by four Canadian acts—at a three-day event dubbed Lexus Live held in Toronto’s Distillery District in August. Lexus called on the Los Angeles-based firm AMCI to design and produce the event, which centred on the use of interactive iPad stations that enabled attendees to provide feedback. To attract the right audience, Attention Span planned a concert series throughout the weekend, drawing more than 7,000 people.

7. Redevelopment of the Brick Works
The industrial site that once housed the Don Valley Brick Works is now a year-round environmental community centre operated by Evergreen, a national charity dedicated to making cities more livable. Evergreen Brick Works, which is still being developed, offers a number of unique event spaces in several heritage buildings and in the new Centre for Green Cities, a LEED (Leadership in Energy and Environmental Design) Platinum building. The Brick Works operates as a social enterprise, with all proceeds from venue bookings being directed toward Evergreen programming.

8. A New Strategy for Canada Blooms
In March, the country's largest flower and garden festival relocated to the Direct Energy Centre at Exhibition Place after 13 years at the Metro Toronto Convention Centre. Canada Blooms general manager Gerry Ginsberg reported that the move enabled landscapers and providers—who invest almost $10 million in the show—to be more creative in their displays, thanks to an easier load-in. Organizers also revamped the opening gala, dropping ticket prices from $200 to $75, which contributed to a nearly 200-person spike in attendance over 2009. Instead of open bars and entertainment, the party directed more attention to the horticulture industry with 20 gardening personalities opening the show, which experienced a 16 percent increase in overall attendance.

9. Elaborate Ice Sculptures
Iceculture created massive, yet intricate designs, for events like the launch of Russian Standard Vodka, the film festival's hockey-themed opening-night gala at the Liberty Grand, and the after-party for the Design Exchange's annual Black & White Fund-Raising Gala in October. For the vodka launch, held at One Restaurant in May, the company designed as a replica of the wooden bar seen in Russian Standard's current television spots. For  TIFF's opening party, Iceculture crafted a 16-foot ice sculpture shaped like a hockey rink that held 144 shot glasses filled with Skyy Vodka. And, for the DX Gala, they created a massive seven-piece ice chandelier suspended from a truss line above the main bar.

10. Smirnoff's Comic-Inspired Industry Party
In July, Daneta Budalich and the team at Mosaic Experiential Marketing created the latest installation of the Smirnoff Experience—an industry party for 300 guests held at Andrew Richard Designs. The concept for the event, inspired by the work of artist Roy Lichtenstein, was a night lived inside the frames of comic book illustrations. The theme began with a printed invitation designed like a comic book. Graphic illustrations affixed to the windows on the exterior of the venue depicted a character by the name of Scarlett arriving at a party, mimicking the arrival of guests on the red carpet. Projections on the windows in the venue's loft space depicted a party scene and changed throughout the night, continuing the story. In lieu of gift bags, Mosaic created a comic book with graphic illustrations of guest photos taken throughout the night and had copies delivered to attendees. 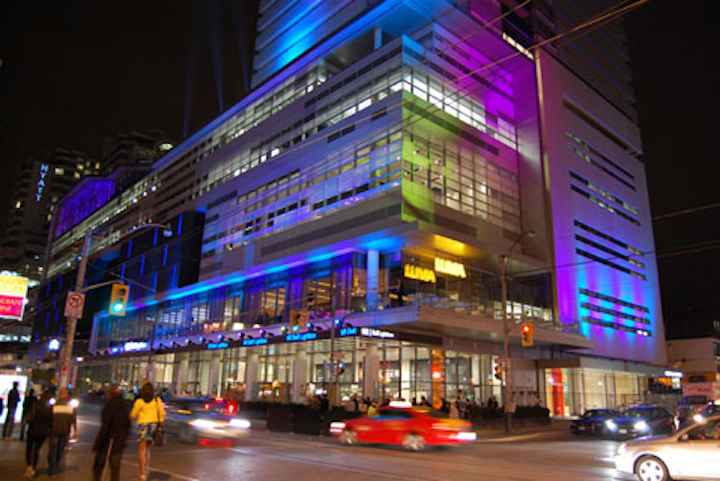 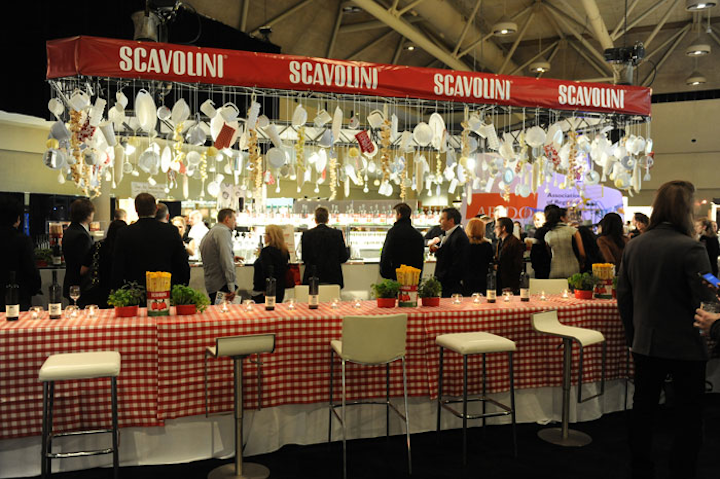 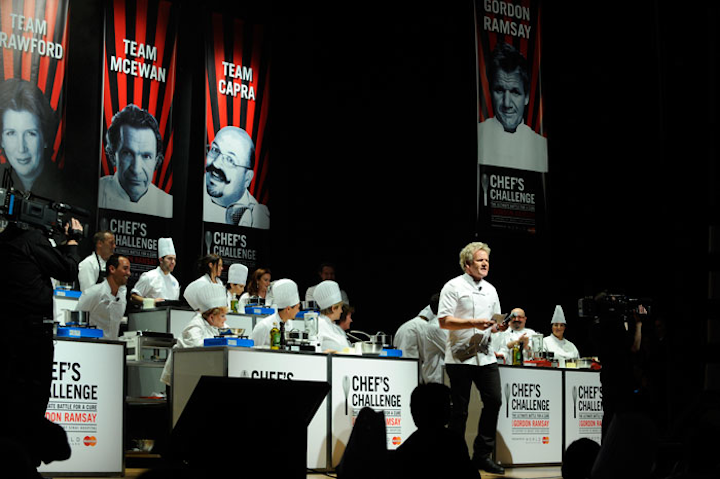 The top 50 fund-raisers at the Chef's Challenge, a benefit for Mount Sinai Hospital, had the chance to cook in chef Gordon Ramsay's kitchen at the Carlu in November.
Photo: Gary Beechey for BizBash 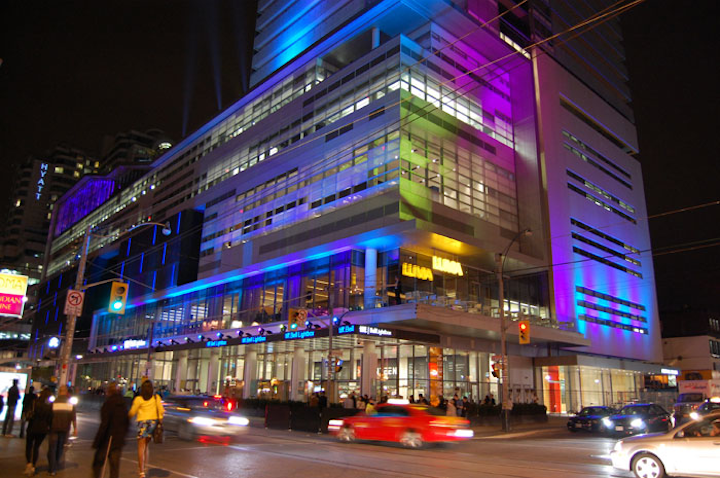 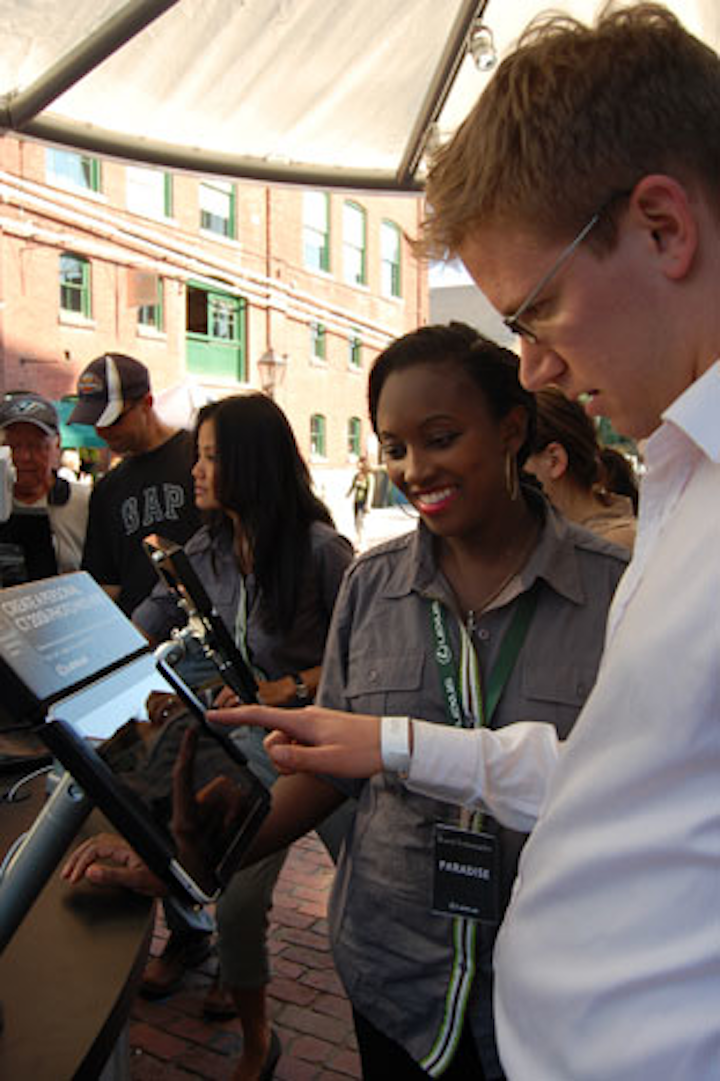 Custom iPad applications enabled guests at the Lexus Live event—held at the Distillery District in August—to obtain details on the specifics of the new Lexus CT 200h vehicle and a chance to map out a route through the downtown core, gathering information about local hotspots along the way.
Photo: BizBash 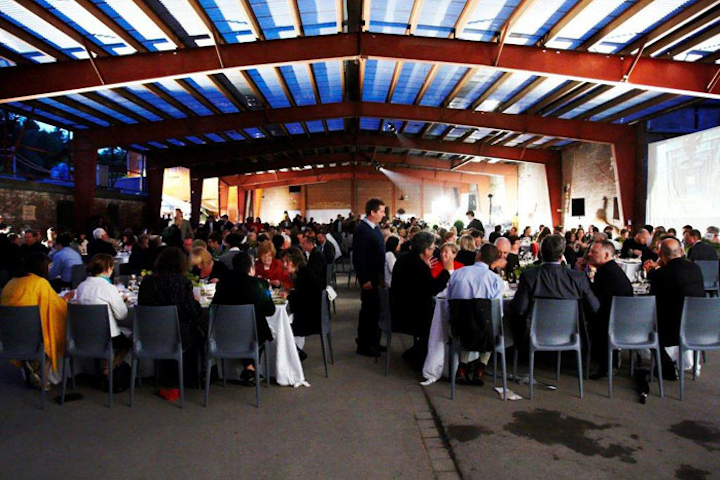 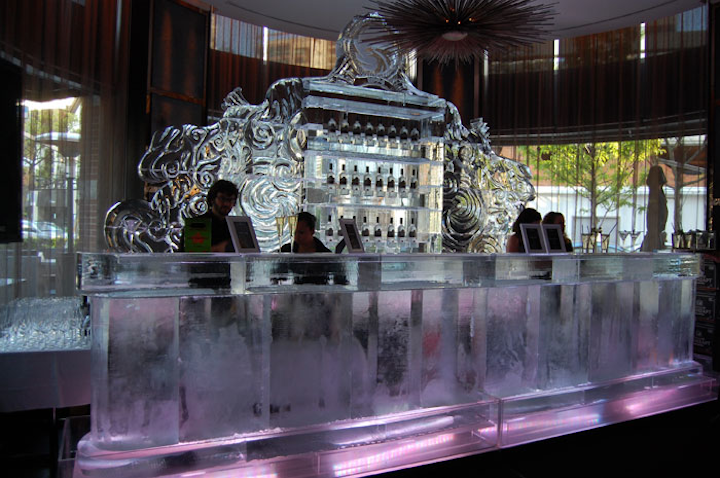 LexPR called on Iceculture to create an elaborate ice bar—a replica of the wooden bar featured in the television ads for Russian Standard—for the brand's Canadian launch, held at One Restaurant in the Hazelton Hotel in May. 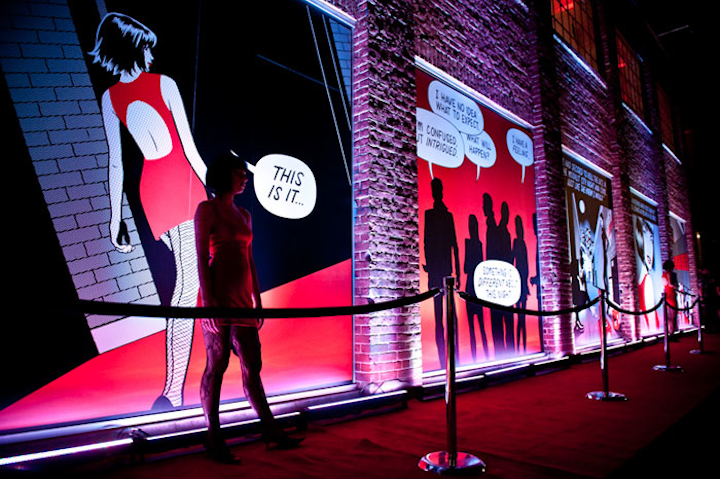 For the Smirnoff Experience, held at Andrew Richard Designs in July, the event management team at Mosaic Experiential Marketing placed graphic illustrations—depicting comic book characters arriving at a party—in the windows of the venue.
Photo: Emma McIntyre for BizBash
More in Toronto