The choice of an auctioneer can determine the success of a benefit and how much money it raises. So how do you choose? 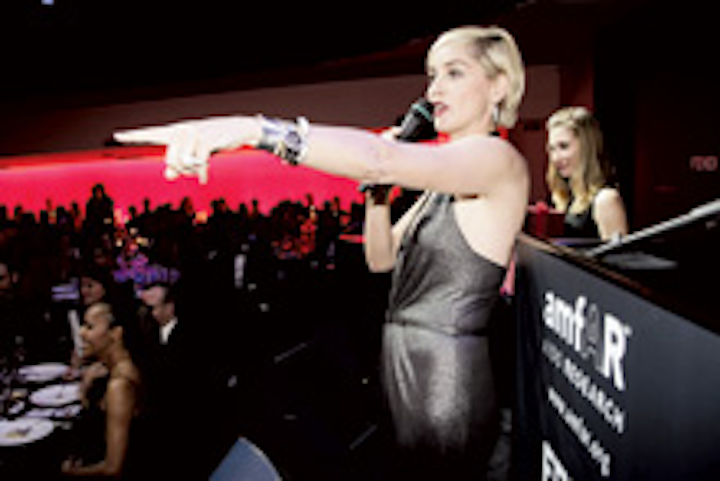 Sharon Stone served as auctioneer for Amfar's Cinema Against AIDS fund-raiser in Rome.
Photo: Daniele Venturelli/Getty Images
As event professionals well know, one of the key aspects of producing a successful live auction occurs months out, as staffers, board members, and friends of the organization secure (read: often beg for) items so unique, so desirable, that attendees (with the added bonus of helping a good cause) will open up their wallets to get them. Let’s say you’ve scored walk-on roles on Grey’s Anatomy and The Office, a private performance by Hannah Montana, and the guitar on which Bruce Springsteen wrote “Born to Run.” Your work is done: This stuff sells itself, right?

Unfortunately, no. On the night of an event, the duty of moving live auction items, ideally for impressive sums, falls to the person taking—and, hopefully, nudging up—the bids. So what makes an effective auctioneer, and how much can your choice affect the success of an auction—and ultimately, the bottom line?“Some of the universal characteristics are that they should have personality, charisma, confidence, and a booming voice,” says Louis Webre, director of marketing and media for auction house Doyle New York. “And they have to be able to spontaneously launch into commentary. It’s a little like being a talk-show host. Once you read an item’s description, you enter into nonscripted territory.”

Other major factors that influence an auction’s success (as measured in both the fun for guests and the funds for the organization) are an auctioneer’s chemistry with the audience and ability to finesse money out of potential bidders, either by cajoling them gracefully or knowing how high to push bid amounts.

As Patti Glover, director of special events and travel at the Greater Los Angeles Zoo Association, has learned the hard way, the two are often intertwined. “You can tell immediately if an auctioneer is clicking with an audience or if they’re very flat,” she says. “If they’re flat, you don’t have much hope that they can draw money out of the crowd.” She describes witnessing a less-than-­effective auctioneer at one of her events as “not pleasant at all. It’s very painful for me to stand on the side and see them almost pleading with the audience. I’m hoping it’s over soon and I’ll never have to relive it.”

“The choice of an auctioneer absolutely impacts the success of an auction,” says Laurie Fabiano, senior vice president of events, marketing, and communications for the Robin Hood Foundation, the nonprofit that stages arguably the biggest fund-raising auction in New York. (Last year’s benefit raised $71.2 million to fight poverty in the city.) “I’ve seen auctions fall flat because the auctioneer started too high, didn’t move quickly enough, or didn’t understand what would motivate the audience.”

One of the natural places to look for a skilled auctioneer is an auction house. Not surprisingly, auctioneers from industry stalwarts Sotheby’s and Christie’s preside over some of the highest-profile benefits. “The key to a successful auction is to move through the lots as quickly as possible, and to know when to close them out, and that takes a seasoned auctioneer,” says Ellen Delsener, president of New York-based benefit specialist Event Associates, who claims that the experience these professionals bring is essential.

Merle Kailis, executive director of the New York-based Samuel Waxman Cancer Research Foundation (its 2006 benefit brought in $4 million), swears by Sotheby’s executive vice president and senior auctioneer Hugh Hildesley’s ability to produce enthusiasm in a crowd. “He drives it; he really drives it. His very presence commands attention. He’s an amazing force,” she says. “He makes people very excited, and the items attractive, [in] combination [with] reminding people why they’re there, and it’s all seamlessly interwoven.”

Another pro who garners equally effusive reviews is Simon de Pury of New York’s Phillips de Pury & Company. “He raises the excitement level. He’s a great talker—he tells stories and anec­dotes about the items and creates a feeling of goodwill,” says Angela Nevarez, special events director at the New Museum of Contemporary Art. “He makes people want to be a part of it.”

De Pury conducts the live auction at the Byrd Hoffman Watermill Foundation’s annual benefit, and Maia Morgensztern, the organization’s art and auction manager, says de Pury’s artistry goes beyond pure charisma. “He really understands what piece should go when, who would be interested in buying what and why, and he understands signs when it’s someone he doesn’t know,” she says, adding that de Pury will often influence the order in which items are presented to achieve the best rhythm (and financial results). “He’ll do something major, followed by something quick. It’s basically like DJing: You build up the tension and withdraw, and then you’re coming back,” she says.

But a seasoned auctioneer is far from the only effective option. “Often a very charismatic and well-known person involved with the organization can actually be more successful than an outside auctioneer with no affiliation,” Webre says. But the key to these laypeople’s success is training—he has seen items go for far less than they should have due to an auctioneer’s inexperience. “It’s important to know what natural [bidding] increments are; if bidding stalls, how to get it started; and how to make eye contact,” Webre says.

Felice Jones, assistant vice president of special events at the Washington, D.C.-based sports marketing company NFL Players, agrees that using someone other than a trained auctioneer can cause trouble. “If the people aren’t accustomed to doing that type of thing, it could really backfire,” she says. “They have to be able to get the job done. Otherwise you end up missing your opportunity [to raise the most money for the organization].”

Still another strategy: Book a celebrity. “Our last auctioneer was Sharon Stone [for a Lupus L.A. event]. She could sell ice cream to Eskimos,” says Pam Sharp, owner of Los Angeles company Sharp & Associates. “People want to watch celebrities move. When you’re at a charity event in Los Angeles, it’s about having fun and making a real show. That’s the challenge.” She cites a benefit she attended as an example: “The crowd was very young, and the auctioneer was from a professional auction house but had no sense of humor. The room didn’t jibe.” (Sharp concedes, however, that a pretty face alone won’t move items, saying humor, wit, and speed are also crucial to an auctioneer’s success—although too: “You can’t just have them up there telling jokes.”) But as Nevarez points out, it’s key to match an auctioneer’s style with that of the crowd: “A dry sense of humor that’s perfect for one group falls flat with the next,” she says.

Sometimes you can split the difference, using a well-known, public personality who also has ties to your organization. At the Shakespeare Theatre Company’s Will Awards benefit last March, local D.C. news anchor Kathleen Matthews, also a benefit co-chair, took to the stage to oversee the bidding. “She’s very used to being in a position of speaking in public, so it seemed like a natural choice,” says Joanne Coutts, the company’s associate director of special events. “I think it was more like a peer thing for the audience. She knew the people attending and could connect with them more than someone who didn’t know the audience.” Matthews’s familiarity with the crowd also enabled her to tailor ad-libs to specific bidders.

Regardless of your choice, one thing virtually all the event professionals we spoke to stressed was the need to prep an auctioneer beforehand. “They should know about the charity and why everyone is there,” says Jones, who sent talking points to her auctioneer before the event and reiterated them that night. Perhaps not surprisingly, one of the key traits planners described is the ability to deftly, but persistently, remind bidders why they’re there.

Making sure your auctioneer knows the lots—and what’s most attractive about them—is also important. “You need to have a coaching portion as to what the key points are and what you want them to address,” says Jen Poyer, special events supervisor for the Catalina Island Conservancy in California. When her organization offered a weekend stay at the island’s luxe Inn on Mt. Ada, with helicopter transportation to and from the destination, the auctioneer hyped the helicopter aspect, not the exclusive property. (The item ended up going for more than its value, but not as much as organizers had expected.)

Delsener, too, has watched some mistakes: “I’ve seen some auctioneers who’ve had a few too many cocktails and are not focused. I’ve seen some who, if the sound isn’t good, get belligerent.”

As Kailis attests, the difference between a compelling auctioneer and someone who leaves the crowd uninspired can very well appear on your bottom line. “[Your auctioneer] makes an important difference,” she says, recalling a live auction she attended that was conducted by a prominent news personality, where a walk-on role on an Emmy-winning, top-rated show was up for grabs. “It went for $2,500,” she says, sounding somewhat appalled. “If that same item was at my event, it would go for $30,000 to $40,000 at the very least. Having someone like [Hildesley] really affects your ability to make money.”

Or how about hearing a patron say this, as Glover, from the L.A. Zoo Association, once did: “You know, I had $50,000 I was going to spend. I would have bid higher.” Now that’s gotta hurt.
More in Experiential, Activations & Sponsorships