Why Pop-Ups Are Getting Even More Popular

Trends in retail and real estate are making it easier for marketers to use temporary stores for experiential marketing activations. (Also, they work.) 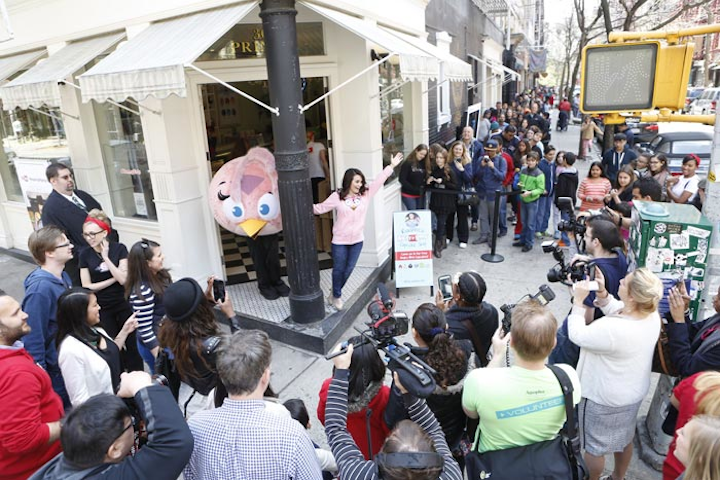 Chad Kaydo (@ChadKaydo) is BizBash’s former editor in chief and the founder and editor of The X Letter, a website and newsletter about experiences, brands, and culture. Chad’s column appears biweekly.

Trendwatching.com claimed to coin the terms “pop-up shop” and “pop-up retail” in January 2004, and in the past decade we’ve seen pop-ups offering everything from yogurt to cat food. The trend shows no signs of slowing.

“I feel like I take a call about pop-ups once a day,” says Kelly Eng, director of client services at experiential agency MKG, which has produced temporary activations for the likes of Delta, Dockers, Hermes, and Warby Parker.

Sometimes those callers just want a pop-up because it seems like the thing to do, Eng says, but pop-ups can also be strong tools for building brand awareness, reaching a new audience, and creating a live experience for a brand with no permanent physical presence.

Here are some reasons why we can expect these temporary stores and brand experiences to keep—sorry—popping up:

1. There’s a glut of unused retail space.
“We’re overstored,” says Robin Lewis, C.E.O. of the Robin Report, a retail strategy newsletter, and co-author of The New Rules of Retail (Palgrave Macmillan). He points to 2010 research from Cushman & Wakefield and Kurt Salmon that says there are 42 square feet of shopping-center space per capita in the United States; the next runner-up in the world is Sweden, with just three square feet per capita.

2. Retail habits are changing.
Lewis says several trends mean retailers will use less and less of all that space: People are purchasing more online. Aging baby boomers are spending money on experiences and travel instead of buying more stuff. Millennials are seeking more urban, boutique-style shopping experiences, which means brands will use fewer and smaller stores, and will do better trying to reach younger consumers at well-placed, well-curated temporary stores.

3. Renting short-term retail space is getting easier.
It used to be you had to send an intern to walk around a target neighborhood and write down phone numbers listed on open commercial spaces, and then call and beg a broker to take a short-term lease while they were waiting for a longer-term tenant. “Now it’s easier to talk real estate owners into them,” Eng says. “But then at the same time, it’s more competitive.”

Since Storefront launched in March 2013, it has facilitated more than 1,000 pop-up-shop bookings for brands including Zipcar and Nike. While anyone can list a location in any city, the company focuses on New York, Los Angeles, and San Francisco, its headquarters. Pollock says Storefront will launch another city later this month.

Meanwhile, some communities are working to invite brands and artists to fill empty commercial spaces. Made in Lower East Side hosts classes, events, co-working hours, and short-term space rentals in empty storefronts in its Manhattan neighborhood. And some venues on high-traffic retail streets now specialize in hosting pop-up shops.

4. Timing is everything.
Before “pop-up” was a marketing buzzword, temporary Halloween shops would open to sell costumes just when people needed them. That principle still holds, with brands launching stores for holiday shopping, or to coincide with big events like New York Fashion Week. Pop-ups help brands be where they want to be, when they want to be there.

“We have very few spaces in Austin, [Texas],” Pollock says, “but every one of them was rented out for South by Southwest.”

5. They can be platforms for other events.
Building out a brand experience in a location that you rent for more than a day or two means you can use it for several different elements of a promotional campaign: a big launch party, cocktails for V.I.P. customers, a reception for partners, a lunch for media, public hours for consumers, additional parties hosted by collaborators or like-minded brands.

6. Pop-ups give online brands a physical presence.
Many of the most interesting and ambitious new brands launch and acquire most of their customers online. But an in-person activation can help strengthen a brand’s relationship with its customers and lure consumers who might not have encountered it online. “In the end we want to have an experience, to touch and feel and talk to people,” Pollock says.

7. Temporary experiences can be experiments.
Some pop-ups become testing grounds where brands can try concepts including new products, store designs, and technology tools. Brands with existing stores can test ideas for their permanent locations, and online-only sellers can see how consumers respond to a brick-and-mortar showroom.

8. They lend existing venues some temporary cache.
While Pollock and co-founder Erik Eliason launched Storefront to help independent brands and artists find unused retail space, they were surprised to see other kinds of locations list their spaces as well. More than 100 hotels are on the site, looking for indie brands to open small stores and give their lobbies a cool, local vibe. Existing venues like hotels and boutiques now make up 30 percent of Storefront listings.

9. They can borrow someone else’s customers.
Matthew Glass, senior vice president at Allied Experiential, has been suggesting a concept he calls “pop-overs”—a cross between a pop-up and makeover that temporarily rebrands an existing establishment. He helped YouTube take over a bakery in New York's SoHo neighborhood, so its regular customers got a surprise when they stopped by.

10. Pop-ups are an entrenched platform.
It’s probably no coincidence that the decade of the pop-up has also been a period when marketers have paid increased respect to the power of live experiences as marketing tools.

“This is one of the tent poles of the industry,” Glass says, as popular as mobile marketing tours and street teams. Brands know they can be powerful, and event creatives get excited about building large-scale experiences outside of existing venues like hotels and bars, especially when they live for longer than a night.

As pop-ups have become an enduring experiential marketing platform, producers say marketers should remember a crucial factor in their original effectiveness. “Part of the initial appeal is that element of surprise,” Glass says. “It’s morphed into something that is perhaps not as expected. You have to try a little harder to do something unusual.”

“For us the whole point of a pop-up is that it feels like it just popped up,” says Eng from MKG, “and it could go away.”

The growth of pop-ups is just one of the trends I'm tracking for The X Letter's new series of trend reports. You can find out more here.