The NB Pizza Co. rewards runners with slices for their training miles. 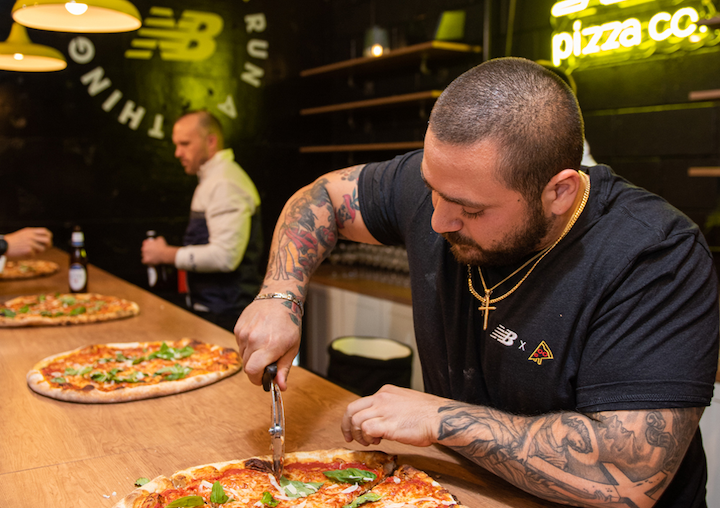 New Balance partnered with Brooklyn's L'Industrie Pizzeria to open NB Pizza Co., offering complimentary slices to runners based on their mileage run. A whimsical twist on the art of pre-marathon calorie consumption, the Murray Hill venue was fully reimagined into an old-school pizzeria with checkered tables and even a speakeasy alcove, where recovery classes are hosted.
Photo: Courtesy of New Balance

NEW YORK—At about 55,000 steps pounded over the course of 26.2 miles, every calorie burned is a calorie earned. With that idea in mind, New Balance, entering the third year as the official footwear and apparel sponsor for New York Road Runners (including the TCS New York City Marathon this Sunday), sought to further tap into the excitement surrounding the global event—the largest of its kind in the world—with an activation centered around a Big Apple icon: the classic New York pizza slice.

“We wanted to engage with the global running community and deliver a compelling and culturally relevant campaign that allows runners of all abilities to join and celebrate the sport,” said Andy Downin, head of global running marketing for the $4 billion Boston-based New Balance. “What better way to do that than let New Yorkers and the runners from around the world who run the TCS New York City Marathon cash in their hard earned miles for a slice of New York pizza?”

On October 11, the NB Pizza Co. was born. Inspired by the New Balance Runaway Pub pop-up that launched at the 2019 Virgin Money London Marathon in April, where runners could cash in miles for pints, NB Pizza Co. in the Murray Hill section of Manhattan (47 East 34th St.) has been open on weekends leading up to and including marathon Sunday, November 3.

Both activations were produced by Mongoose Sports & Entertainment out of London.

In terms of venue, New Balance wanted a location that was central to New Yorkers and located in Midtown where the heart of the marathon is every November. “We wanted it to be easy for native New Yorkers as well as out of town visitors, and therefore street level was important,” said Downin. “Above anything else we wanted an authentic shop where we could give runners a place to gather and celebrate the hard earned miles they achieved through the last few weeks of training and marathon weekend.” 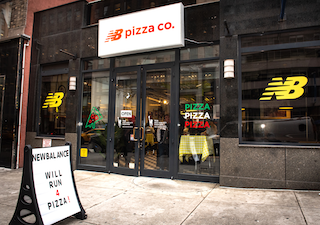 Produced by London-based Mongoose Sports & Entertainment, the NB Pizza Co., which runs from October 11 to November 3, celebrates the TCS New York City Marathon with an activation centered around a Big Apple icon: the classic pizza slice. “We wanted to bring new consumers into the brand and show them the excitement of the TCS New York City Marathon and the sport," said Andy Downin, New Balance head of global running marketing.Photo: Courtesy of New Balance

Once inside, visitors to NB Pizza Co. are greeted by a near replica of a classic New York pizzeria—albeit with an athletic twist. The space is decorated with pictures of athletes and images that celebrate New Balance’s storied history in the sport of running. Checkered tables and even a speakeasy alcove, which recovery class sessions are hosted for runners, all add to the ambience. “It’s a hub for runners and a place where we can celebrate the sport,” added Downin. On October 9, a private kickoff party was hosted with chef, restaurateur, author, and Top Chef All-Stars winner Richard Blais that featured an all-you-can-eat pizza pie competition.

As for those famous slices served fresh by Brooklyn-based L’Industrie Pizzeria, runners can join Strava Challenges, log their training miles in their home country and then cash in for slices when they arrive in New York (Note: you don’t actually have to run the marathon to dine). Slices are rewarded based on miles run (five miles = one slice; 50 miles = four slices and so forth). Locally, New Balance has also hosted happy hour runs and long runs departing from the pop-up pizzeria. According to a New Balance rep, more than 1,300 runners have come through thus far, with more expected this weekend as out-of-town competitors begin arriving in town.

The NB Pizza Co. is part of an integrated marketing campaign that includes an official footwear, apparel, and accessory collection, out-of-home advertising, digital, social engagements, and an on-course block party.