Nicole Phillips, who will be exploring the new rules of social media at this year’s Event Innovation Forum—South Florida, examines the conversations surrounding Austin’s influential interactive, film, and music festival. 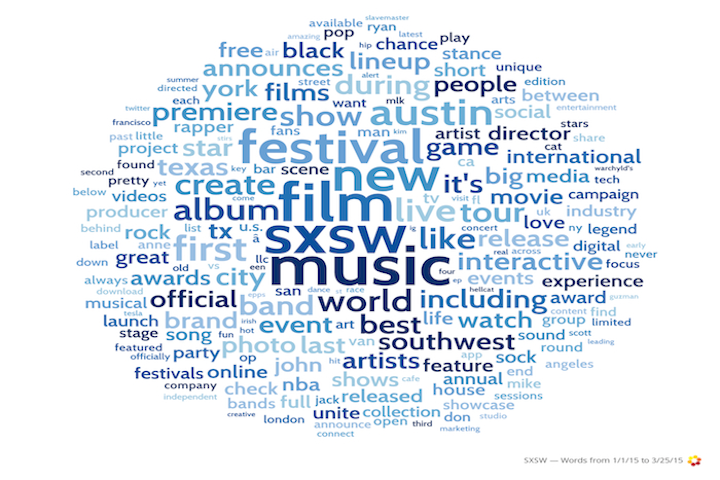 Nicole Phillips (@Liberate) is director of strategic planning and business development at Switch, an experiential marketing agency based in St. Louis.

If you are like millions of other Americans, you spend a lot of your spare time on your phone. And what are you doing? Posting, tweeting, Instagramming, and more on social media channels. Everything from Instagram to Twitter, from Facebook to Snapchat. You’re checking in at restaurants and uploading pictures of your meal. You’re snapping selfies with your friends and deriving the perfectly quotable caption. You’ve created 10 hashtags to end all hashtags; who cares if they’ll never trend, they’re hilarious.

And when you’re not busy sharing your own news, you’re checking your channels for news of your friends. What are they eating, where are they going, how are they making jokes only they think are funny. (#yourenotthatfunny)

So what do all of these numbers mean for those of you planning meetings and events? A lot of things, but unequivocally that what happens at your meeting or event will be shared with a far larger group than your attendees. And that can be a good or bad thing.

Let’s take, for instance, the South by Southwest festivals—film, interactive, and music—that take place each year in Austin, Texas. This year’s festivities just wrapped up. Did you go? I didn’t. But I sure know a lot about what went on, because my friends spent a lot of time sharing their contributions to Austin’s “Stay Weird” initiative.

With an approximate 72,000 registrants and many of them focused in the digital and entertainment sectors, SXSW definitely made an impact on social media.

To examine the social media conversations surrounding the event attended by a few and resulting in impressions upon many, Switch performed a social monitor to look at any and all posts—including reviews and comments—involving SXSW across all social media channels from January 1, 2015 to March 27, 2015, specifically Twitter, Google Plus, Facebook, YouTube, Instagram, and various forums and blogs.

There were approximately 2,916,884 posts regarding SXSW during this almost three-month time frame, and 98 percent of the posts came through Twitter. Most of the volume came in mid-March, during the film and interactive festivals, with users posting most often on Friday afternoons through about 11 p.m. And posts were, for the most part, positive (21 percent) or neutral (74 percent).

The top mention within posts was, of course, @SXSW. But there were several blogs, publications, and celebrities also on the list, including:

We also looked at the top hashtags, where users were pithy vs. overly clever:

Meanwhile, some celebrity heavy hitters—and one up-and-comer—captured the top retweets:

What were people talking about? Well, any and everything, from the venues to the film titles, the panel discussions to the artists.

By the end of the festivals, these conversations generated approximately 23 billion potential Twitter impressions—a number based upon the number of author followers, comments, retweets, and more. Twenty-three billion. That’s a lot of impressions. And they were coming from all over the world.

So let’s revisit these numbers: 72,000 approximate registrants at the festivals. Almost three million social media posts. And approximately 23 billion potential impressions. I think anyone could argue that SXSW has its social media game down pat.

How can you and your event or meeting get in on some of this action? Keep social media front of mind not just for pre-promotion, but also for during the event. Prompt the audience with hashtags. Create a photo booth for Instagram posters. Determine prizes or giveaways based on posts. Engage your highest-profile guests to engage, share, and communicate with their followers on behalf of the event.

Disclaimer: The views and opinions in this article belong to the author, and do not necessarily represent those of BizBash.