It might be best known for the off-road capabilities of its cars, but on March 26 Land Rover sought to showcase its urban agility with the unveiling of its 2014 Range Rover Sport. Held on the eve of the New York International Auto Show, the automaker made a big splash with a Hollywood-caliber production that included road closures, a party for 700 at Skylight at Moynihan Station, and one A-list actor: Daniel Craig.

For the massive undertaking—accomplished in a relatively short three months—Jaguar Land Rover executives Richard Agnew and Stuart Schorr, global public relations senior manager and vice president of communications and public affairs for North America, respectively, turned to longtime production partner, Imagination. The London-based creative communications agency was given the task of devising a multisensory experience that would be both memorable for the jaded automotive journalists and exciting for clients.

Ross Wheeler, head of the automotive team at Imagination, along with colleagues Steve Lidbury, creative director for the automotive team, and Will Roberts, production manager, tackled their most extravagant Land Rover project in a decade via an elaborate short film directed by Jonathan Taylor that had the Range Rover Sport traversing through a Brooklyn shipping yard, a Park Avenue tunnel traverse, and over to the James A. Farley Post Office on Eighth Avenue. The event was as much a celebration of the redesigned S.U.V. as it was an ode to New York City, which Land Rover said is the world’s largest market for the Range Rover Sport.

As the event attendees gathered inside the 16,145-square-foot converted raw space, awaiting Craig's arrival, they were surrounded by wall-to-wall black carpeting and graphic light tubes. "We left the ceiling completely exposed to allow people to see where they were," said Wheeler. "We dressed the rest of the set bright in order to reduce the space down—wanting the focus to be on the screen and the film element so everything else went into a very dark palette."

Video screens played a crucial decor element. One large LED screen, complemented by a series of support relay monitors, featured live feeds waiting for Craig to make his drive to the event (in total he was physically in the vehicle for about 15 minutes, driving for about three and a half blocks), while additional cameras focused on the party guests and arrivals. More than 120 New York City police officers and additional security were brought in to guarantee the shut down of the roads at precisely 7.36 p.m.

"We were looking for an iconic venue in central Manhattan in order to attract the right crowd, and we wanted somewhere suitable where we could feasibly shut down the roads," said Wheeler of the choice of venue. "Also, to have iconic elements such as the front façade of the post office and the Empire State Building in some of the shots was key."

Clearly, the main challenge was mastering the combination of moving parts—from shutting down streets to working with celebrity talent to the fact that it was all being live-streamed globally. The Imagination team conducted a few trial runs late Sunday night, but "there was no real way of bringing it all together until the actual moment," said Wheeler. "There was zero flexibility to let things slide." 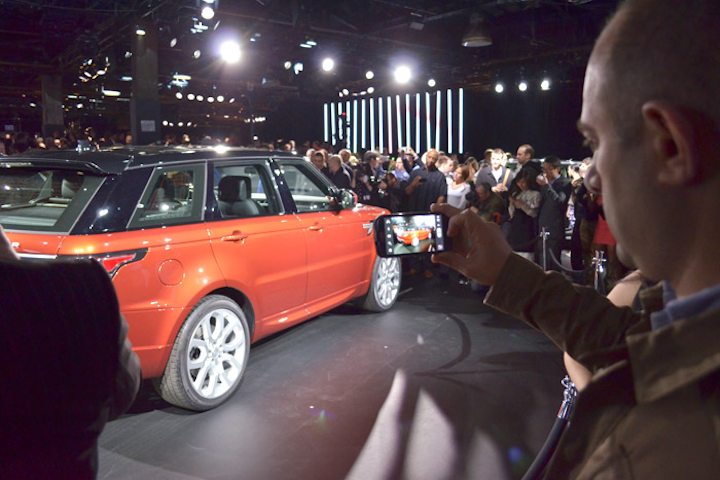 Following Daniel Craig's exit, the 700 invited guests were invited to have a closer look at the new Range Rover Sport, which was parked on a rotating stage elevated six inches off the ground. The entire venue was dressed in black carpeting, while vertical light tubes provided an element of urban design.
Photo: Carolyn Curtis/BizBash 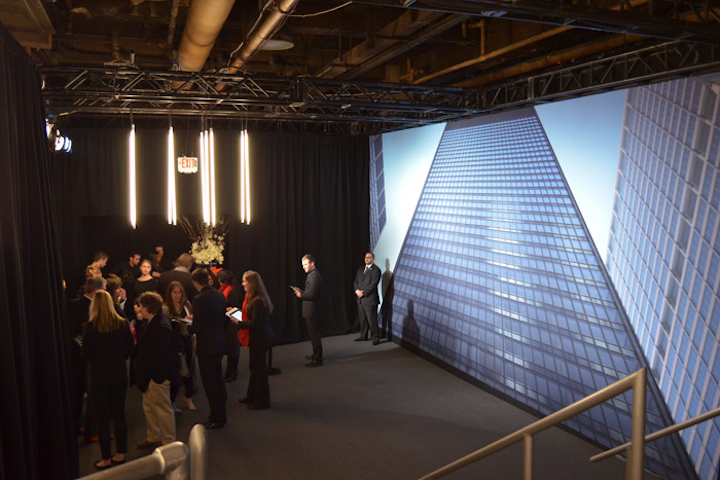 As a nod to the event's urban focus, Imagination erected a massive LED screen at the main entrance to the Skylight at Moynihan Station venue. The screen played a continuous loop of prerecorded video imagery of the Manhattan skyscape and various iconic landmarks. The event's location took five days to build out and two days to break down.
Photo: Carolyn Curtis/BizBash 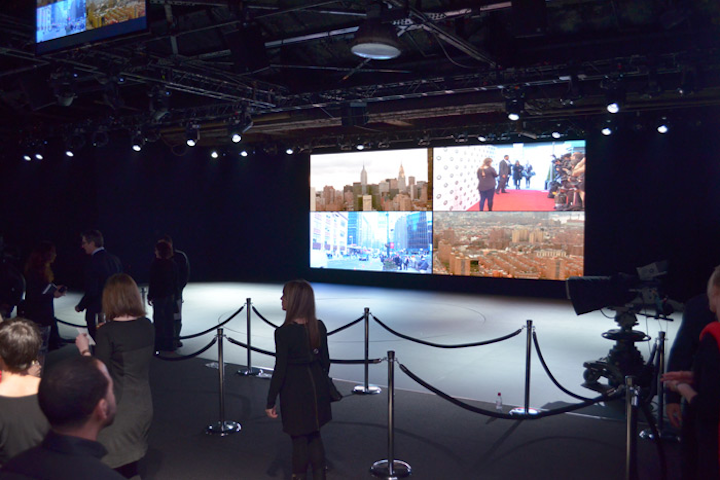 In the lead-up to Daniel Craig's drive-on appearance (for which he was rumored to have been paid $1 million, along with the donation of a vehicle to his charity, S.A.F.E.), large LED screens projected atmospheric video of Manhattan as well as live red carpet arrivals and Craig's drive path, all in an effort to build anticipation and frenzy for the live countdown. Stanchions were erected in front of the stage to accommodate journalists, photographers, and V.I.P. celebrity guests.
Photo: Carolyn Curtis/BizBash 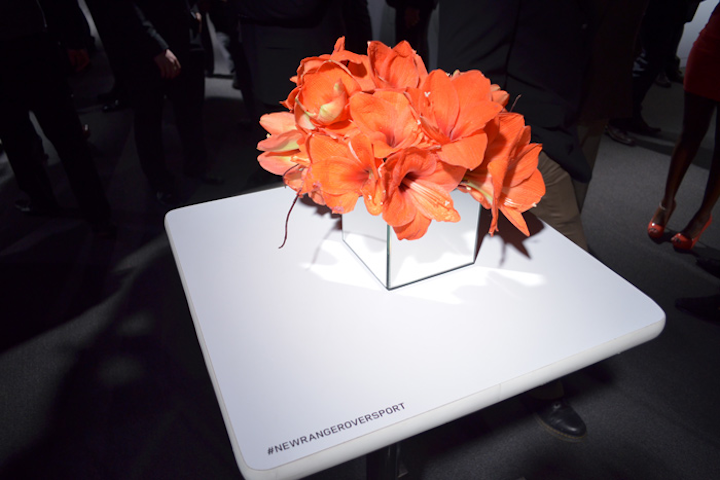 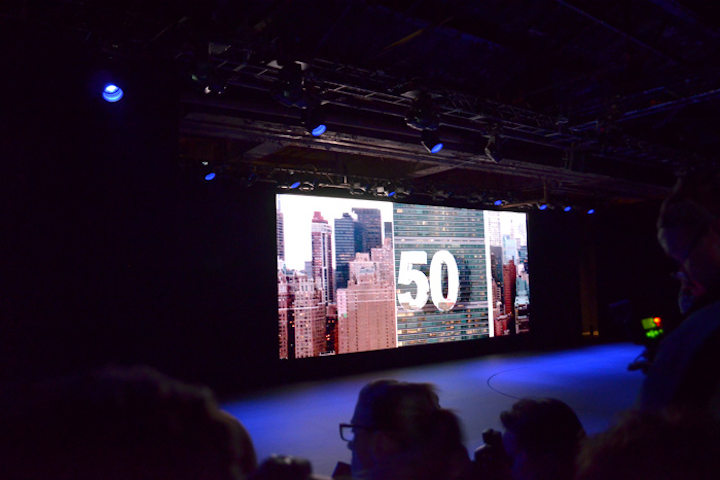 The multisensory event kicked off with a live countdown set against images of the Manhattan skyline. By tiering the party space, Imagination managed to create sight lines for as many guests as possible.
Photo: Carolyn Curtis/BizBash 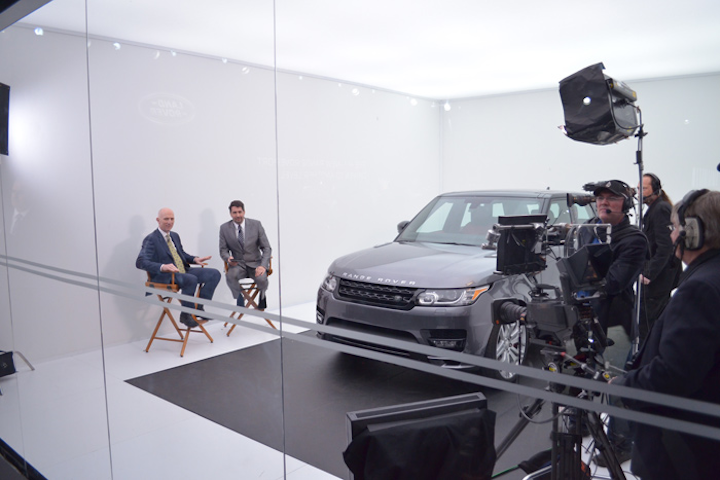 Immediately following the unveiling, the global audience watching via live stream were treated to an extra 30 minutes of live introduction to the vehicle, along with a Q&A, hosted by Land Rover global brand director John Edwards and design director Gerry McGovern. Imagination built a 108- by 86-foot soundproof studio glass box.
Photo: Carolyn Curtis/BizBash 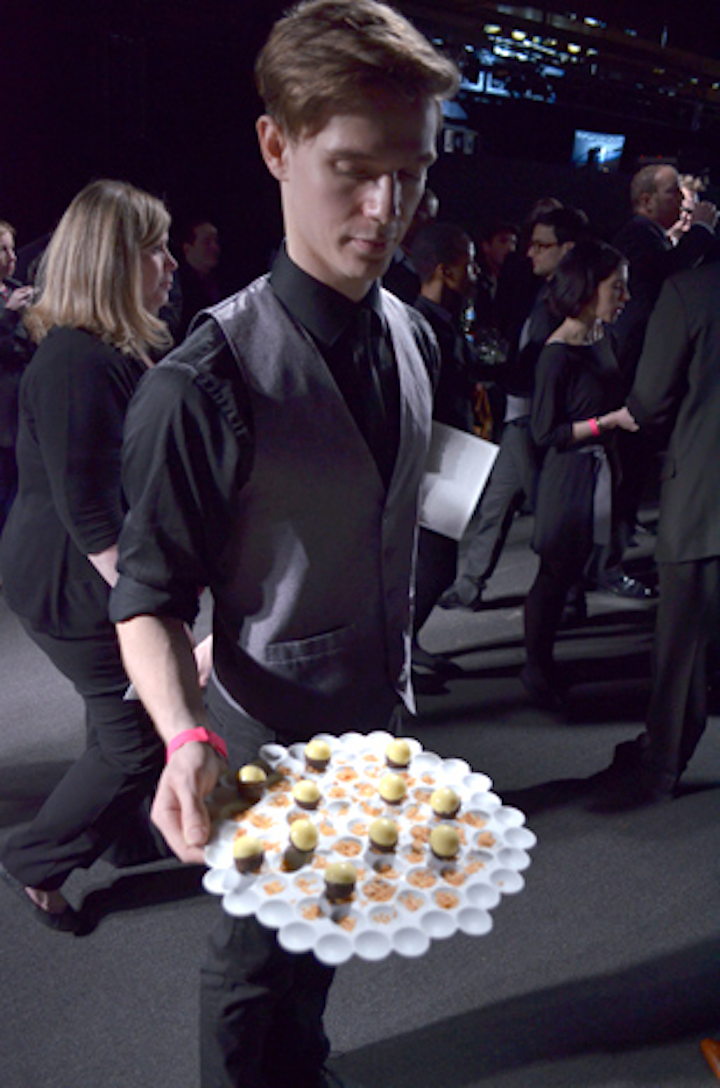 Pinch Food Design served a bevy of bite-size foods throughout the night that loosely adhered to a British theme, including bangers and mash, chicken ragu arancini, lobster pinch, fish and chips, chicks in a blanket, and fallen broccoli soufflé.
Photo: Carolyn Curtis/BizBash 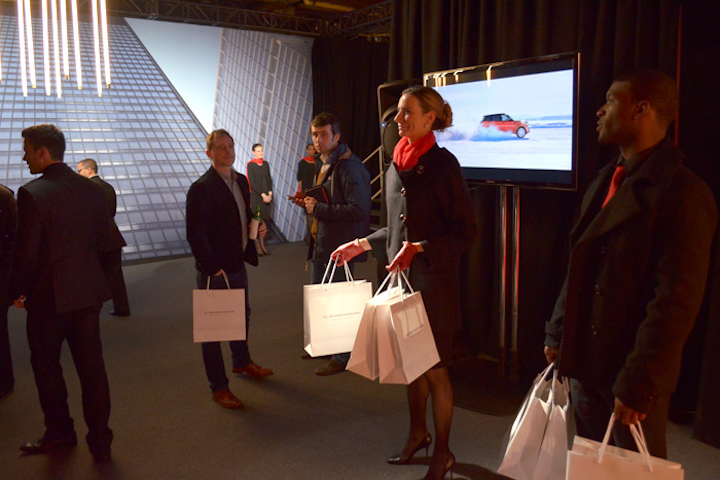 As guests exited the event, staffers in matching uniforms (their scarves matched the orange of the Range Rover Sport driven by Daniel Craig) dispensed gift bags that contained a detailed catalog of the new vehicle.
Photo: Carolyn Curtis/BizBash
More in Strategy