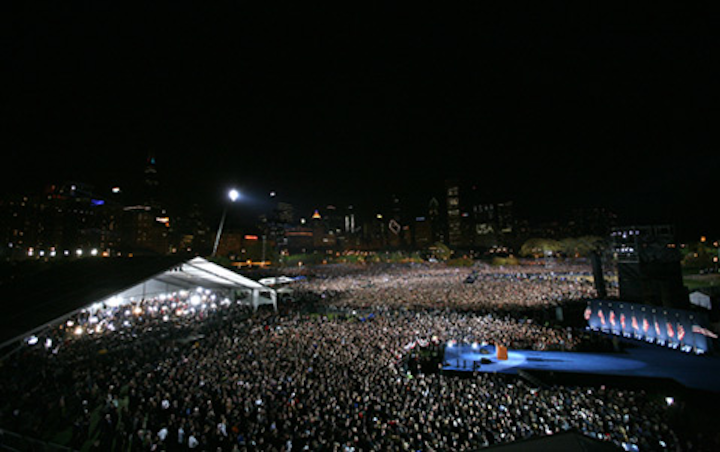 Though some guests found standing room close to the stage where Obama spoke—television coverage showed Oprah Winfrey and Reverend Jesse Jackson there—catching a glimpse of the next president proved difficult in much of the tightly packed park. Instead, most attendees trained their eyes on a giant JumboTron stationed at the southern end of Hutchinson Field, which C3 Presents erected to broadcast news from CNN throughout the evening and showcase Obama's speech.

Also on site were staffers from vendors such as Hall's Rental. According to Gutekanst, "There was just a wonderful camaraderie amongst everyone there. There was a tremendous respect for the campaign. [All the vendors] just wanted to make this happen for them."

Gutekanst said that though everything ran "smoothly, with no hassle," it was a "long night"—and week—for all involved. Ten days before the election, all staffers had to submit credentials to be approved by security. On Monday, Limelight loaded in food for a Secret Service sweep (which involved sniffer dogs), and on Tuesday, staffers arrived at the park at about 4 a.m.

When Obama's speech wrapped up around midnight, the rally was over. Crowds spilled out of the park and took to the closed-off Michigan Avenue, where security guards on foot and on horseback stood in clusters at each corner, vendors hawked pins and T-shirts, and cheers seemed to move in waves, starting at the back of the crowd and moving quickly toward the front. While the crowd dissapated, vendors stayed behind: Gutekanst said her staff was still breaking things down at 4 a.m.