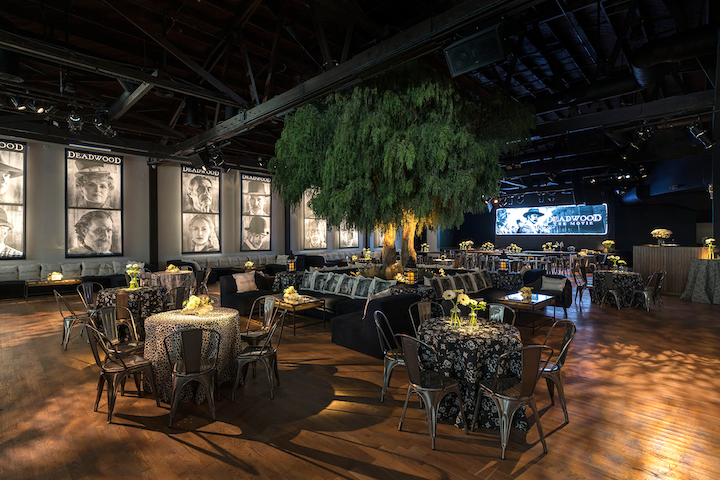 To celebrate Deadwood: The Movie, which premieres on HBO today, the network's Lauren McMahon worked with longtime collaborator Billy Butchkavitz on an immersive Western theme. Held on May 14 at the Sunset Room in Hollywood, the event had a Western feel with an 18-foot tree and a mausoleum wall from Agile Eye Solutions. Additional vendors included Images by Lighting and Town & Country Event Rentals; Plan-it Interactive created a casino, and a jail cell photo op had photography by MirMir.
Photo: Gabor Ekecs

In Case You Missed It
We took a look inside the Southern California chapter of Wedding International Professionals Association's annual design challenge, where six wedding designers created vignettes inspired by six distinct decades.

In the News
Star Wars: Galaxy's Edge opens at Disneyland today, following a star-studded opening party with appearances from the likes of Harrison Ford, George Lucas, and Mark Hamill. The Hollywood Reporter: “Ford was the final of the surprise guests Disney C.E.O. Bob Iger trotted out to an enthused crowd to unveil a highly anticipated attraction. ... Galaxy's Edge has been hotly anticipated since 2015, when Iger revealed a Star Wars-themed attraction would be coming to Disney parks."

Jason Mitchell, star of The Chi who was recently accused of misconduct by two female colleagues, is no longer in the running for "Best Performance in a Show" at the MTV Movie & TV Awards. Variety: "The awards show, which will air on June 17, will continue the category with just four nominees now that Mitchell has been removed. MTV first announced this year’s Movie & TV Awards nominees on May 14. But less than a week later, it was revealed that the actor had been dropped from Season 3 of The Chi, as well as the Netflix film Desperados, over allegations of misconduct.

A new LAX-run Twitter account updates travelers on traffic, parking availability, and security wait times. Curbed: "Announced this week, the new account is already up-and-running. Once every 30 minutes it posts updates on traffic in and around the airport, as well as availability in each of the airport’s parking lots. Every 15 minutes, you can find updated wait times for security screenings at all eight terminals. Those estimates haven’t before been available and are being provided through a pilot program with a tech startup called Plot."

Surprise Event Metric of the Week
170 percent—the amount that sponsorship spending has grown this year for RuPaul's DragCon, which took place at the Los Angeles Convention Center May 24 to 26. The convention, which also hosts a New York edition every year, is produced by World of Wonder. According to AdWeek, the production company hired a brand partnerships executive earlier this year to keep up with the demand.

Venue Buzz
The Peninsula Beverly Hills has completed a renovation of its 4,600-square-foot spa.

Overheard
"It’s a simple enough switch, with a huge impact on our environment and oceans.”

—Chef Michael Cimarusti on why his restaurants, Providence and Connie & Ted's, stopped using disposable plastic straws a year and a half ago. Cimarusti and other chefs, restaurants, and hotels spoke to Los Angeles magazine about how they've been adjusting to the statewide plastic straw ban, which took effect almost six months ago.

On the Scene
Held on May 21, the launch party for Kylie Skin—Kylie Jenner's new skincare line—took place on May 21 at Goya Studios. To match the line's packaging, the Mindy Weiss-designed bash was pretty in pink, with everything from the furniture to the lighting to even the sushi and ramen taking on a rosy tone. Additional vendors included Jeff Leatham and Revelry Event Designers.

In benefit news, the Chrysalis Butterfly Ball, the area’s major fund-raising event for the homelessness and low-income support organization, will be held on Saturday at a private Mandeville Canyon estate. And on Sunday, the ninth annual Pedal on the Pier spin-a-thon at the Santa Monica Pier will raise money for the Harold Robinson Foundation.

Looking into next week, the U.S. Travel Association's IPW takes place in Anaheim from June 1 to 5. The trade show is expected to draw 1,000 travel organizations and 1,300 international and domestic buyers while also generating $4.7 billion in future travel to the United States.