Lisa Cericola
Kim Cattrall and artisanal cheese makers might seem like an odd combination, but both shared the spotlight at the 21st annual James Beard Foundation awards, held Sunday night at Lincoln Center’s Avery Fisher Hall. This year’s theme was "Artisanal America," emphasizing small farms and specialty food producers from across the country—“the chefs behind the great chefs,” as foundation president Susan Ungaro said. Cattrall, doing her best Samantha Jones act in a slinky gold dress, co-hosted the awards with Bobby Flay, which were followed by a gala reception featuring chef-run tasting stations.

Cattrall aside, the food, as always, was the main draw. Ungaro worked with David Bowen of Bowen & Company and co-chairs Dan Barber of Blue Hill and Odessa Piper, formerly of Madison, Wisconsin’s L’Etoile, to select 32 chefs from around the country whose restaurants emphasize sustainable cuisine. In planning their dishes for the post-ceremony reception, each chef was asked to incorporate at least one ingredient from one of their favorite local farmers or artisanal food purveyors. “[Beard] believed you got the true flavor of a place by meeting the local farmers, cheese makers, bread bakers, and butchers. We believe our theme is just another way to celebrate his legacy and the very active and passionate artisanal movement being embraced by America's greatest chefs,” Ungaro said.Bowen and his team created subtle branding throughout the event that referenced the farm-focused theme without resorting to barnyard clichés. In the theater, a sepia-toned montage of photos submitted by the featured farmers served as a backdrop for the stage. Throughout the the lobby and grand promenade, decor was limited to flowers and produce adorning each of the 57 chef- and sponsor-manned tasting stations. Steven Noble of Steven Noble Illustrations worked with Linda Florio of Florio Design to create six drawings ranging from a loaf of bread to farmers that appeared on signage throughout the space.

One new touch was group sponsors from outside the food industry. Delta's cocktail lounge served mojitos, lemon drops, and pomegrante martinis, all new additions to its in-flight menus. And Lexus planted its new luxury hybrid (perhaps a nod to the sustainable theme?) in the middle of Avery Fisher Hall, with its doors wide open to show off the car’s stereo system.

Like last year, the award ceremony ran about three hours long, which Bowen says is a concern when planning the event. “The format is working well, but we’re always trying to get the show shorter,” he said. Local winners included Gramercy Tavern for outstanding restaurant, David Chang for outstanding  New York chef, Joe Bastianich and Mario Batali for outstanding restaurateur, and Gavin Kaysen of Café Boulud for rising star chef of the year.

Following the ceremony, which ended a little after 9 p.m., about 1,500 guests filled the lobby and grand promenade, pushing, and even elbowing their way through the crowds to try dishes (served on eco-friendly plates from Bambu) like burrata with braised artichokes, pine nuts, and currents from Nancy Silverton of Pizzeria Mozza in Los Angeles, rhubarb gelato with maple strawberries from Nora Pouillon of Restaurant Nora in Washington, D.C., and rabbit roulade with fava beans, mint, and olives, from Peter Hoffman of New York’s Savoy. Susan Wilber, hired by Bowen & Company, served as chef coordinator, making sure everything was running smoothly behind the scenes. Cocktails, headed up by drink expert Steve Olson, were once again served on the second-floor terrace, in spite of the raging heat and a brief thunderstorm. Guests didn’t seem to mind; the area remained packed until midnight.

In the V.I.P. dining area, which was separated by a substantial iron gate, John Yarce of Organica crowned 12 tables with tall vases filled with white hydrangeas and artichokes and other vegetables submerged in water underneath. About 150 guests including Cattrall avoided the crowds and were served passed hors d’oeuvres and a six-course menu chosen by Barber and Piper from items served at the tasting stations—a more civilized way to dine than with the hungry masses. 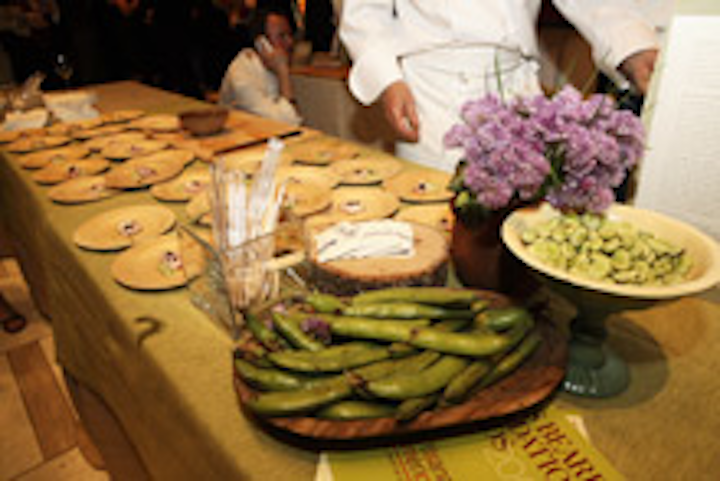 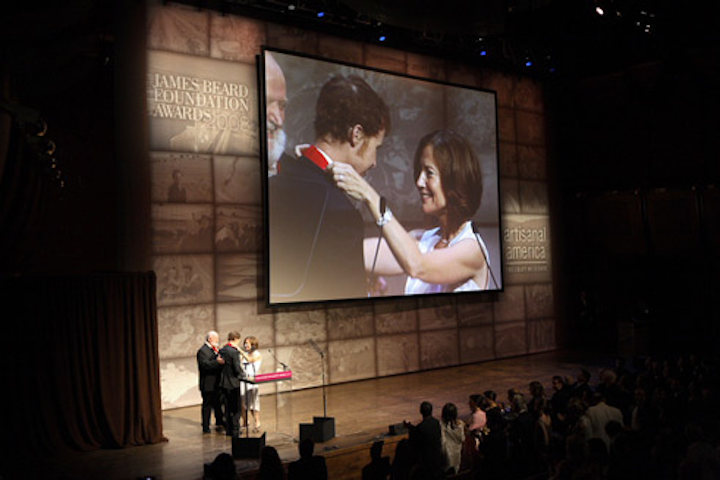 Many of the featured farmers and food purveyors submitted photos, which were used to create a patchwork backdrop for the stage.
Photo: Francine Daveta for BizBash 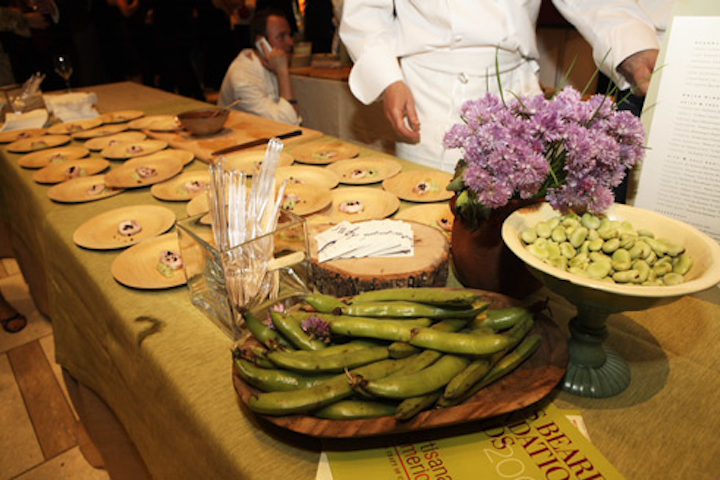 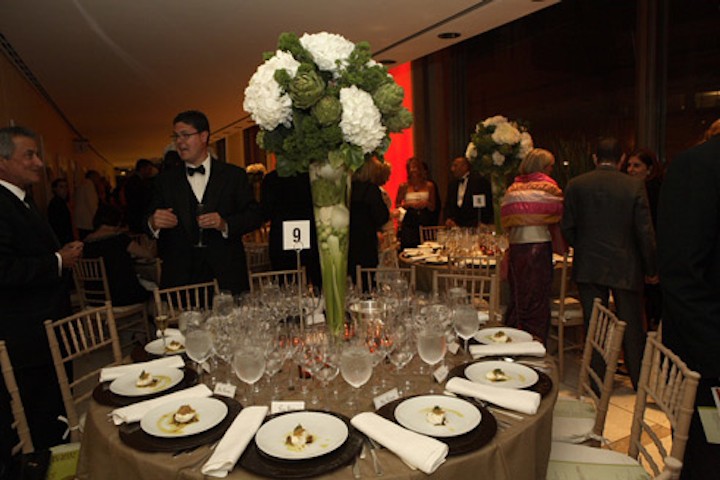 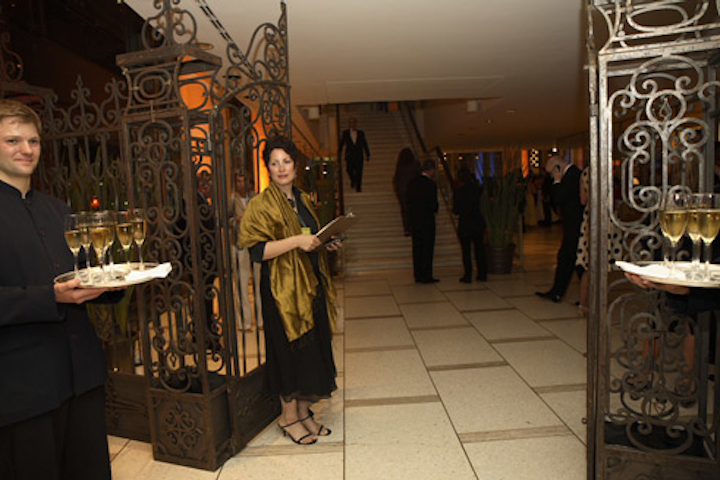 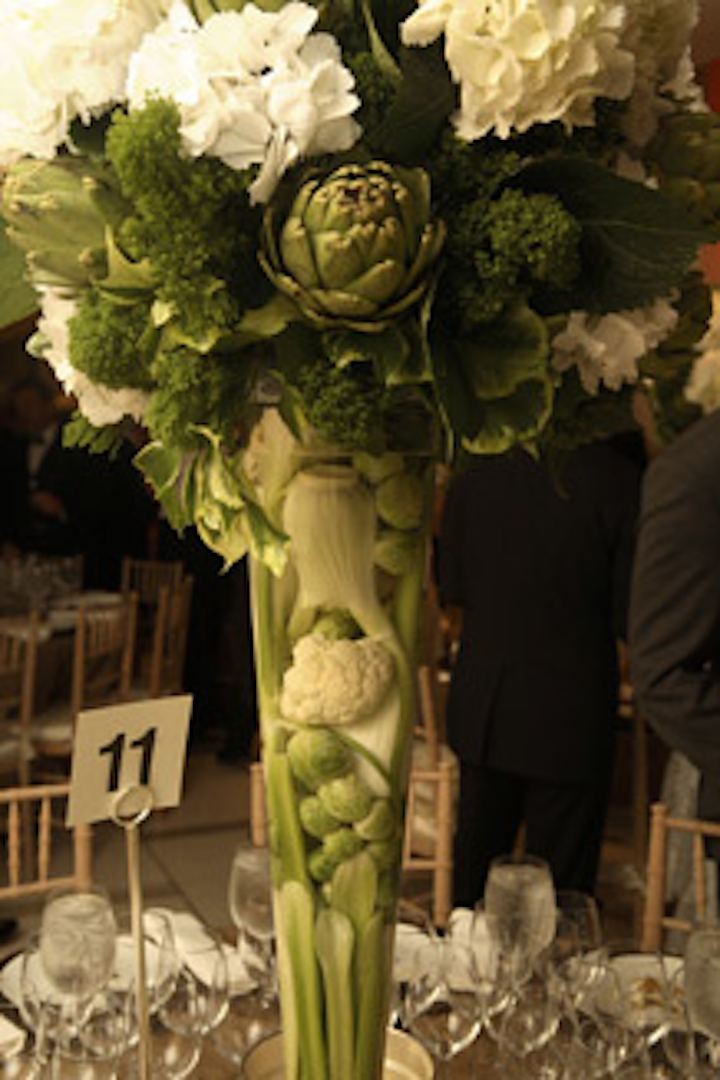 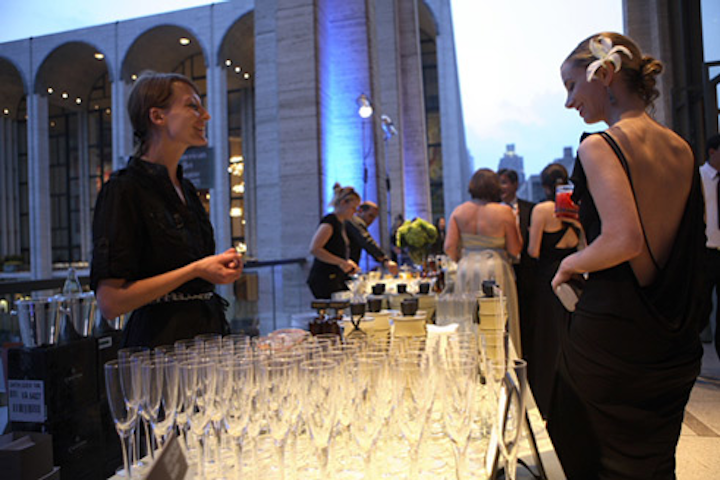 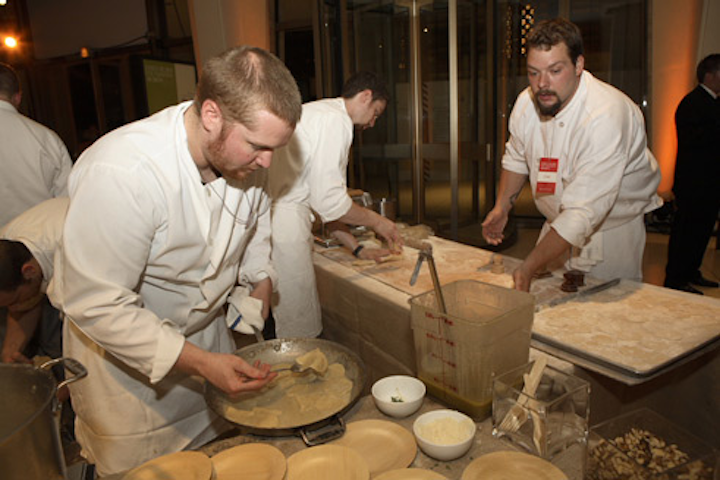 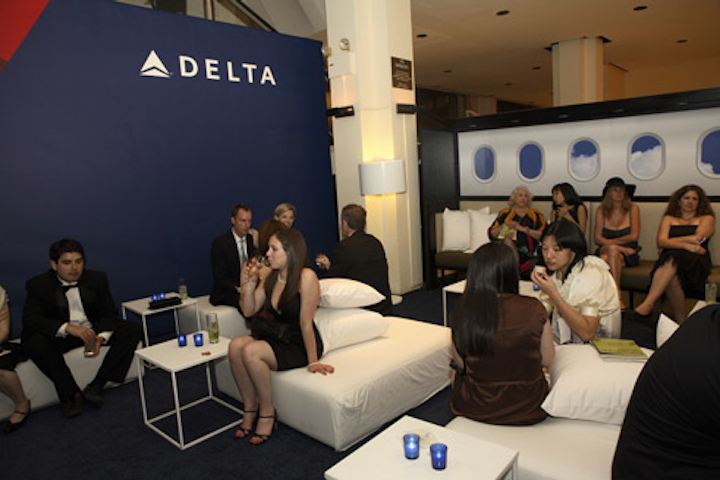 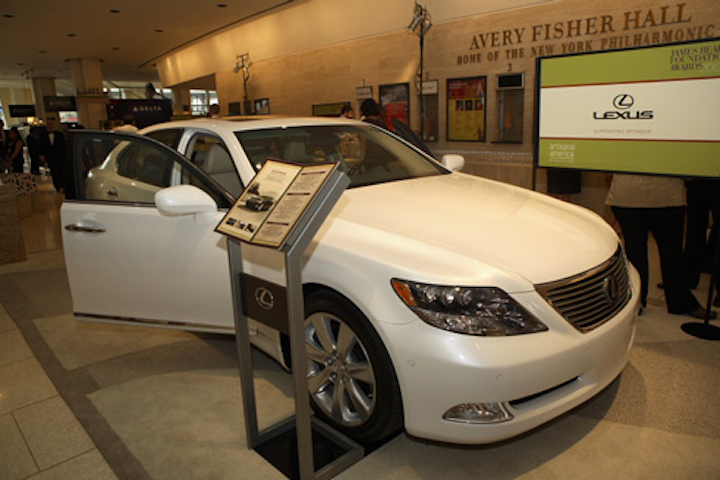 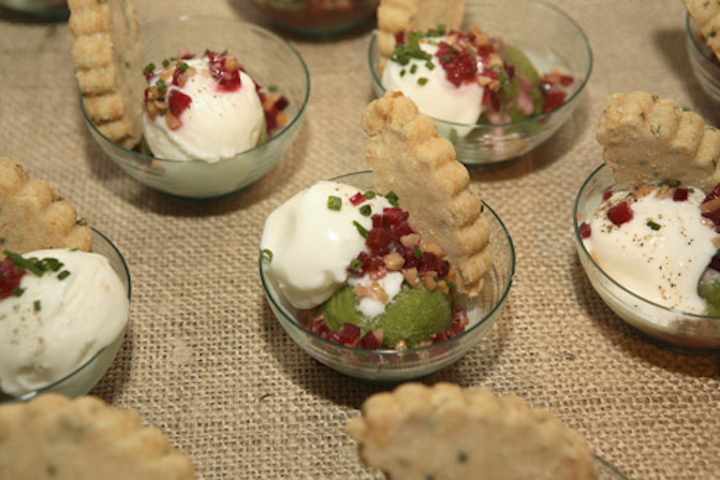