On Thursday, April 5, Discovery Communications returned to Jazz at Lincoln Center for its annual upfront, bringing talent and a crowd of 1,000 to the Columbus Circle site. This year, the company looked to keep the focus on its brands and networks by adding new elements to the reception that followed the presentation.

“The goal is to be able to show our content in the best format,” said Andrew Shortell, the company’s director of global events. “It’s a brand experience. We try not to go over the top. We try to be subtle and sophisticated. It’s a cool, sophisticated background of Discovery and letting each network here showcase itself.”

Following the formal show-and-tell in the Rose Theater, guests flowed into the atrium and the Allen Room. Last year, Discovery set up a buffet in the atrium, and Shortell said it felt claustrophobic. So this year, servers passed hors d’oeuvres and drinks in the space—keeping the food stations limited to the more spacious Allen Room—which opened up the layout and allowed for more movement.

The room also contained two network showcases: OWN and the Discovery Channel. These vignettes, distinguished by different furniture and logo-marked pillows, were set up as areas for clients to meet and greet executives and talent, and take photos. The organizers continued the vignettes into the Allen Room, creating sections for networks across the tiered configuration. TLC and Investigation Discovery (ID) set up on the first level, and dedicated photo opportunities were housed on the top tier, one for Velocity’s Road to Le Mans and another with costumed character to promote Animal Planet's Finding Bigfoot.

In previous years, the networks didn't put talent on display at the reception. Shortell explained that the change provided “a nice opportunity for photos.” Some notable names like Craft Wars producer and host Tori Spelling, ID star Susan Lucci, and Road to Le Mans executive producer and star Patrick Dempsey made appearances, while some, such as Oprah Winfrey, only turned out for the presentation.

To reinforce the identities of its various properties, the event also projected logos throughout the room, a visual display synced to lighting cues that matched the colors of each network while content from their shows aired. Animal Planet, for example, had green lighting.

In terms of catering, the bulk of which was handled by Great Performances, bars on the top and bottom levels offered snacks like deep-fried olives, while a buffet offered more substantial fare, including short ribs with fingerling potatoes and sea bass. A dessert bar served treats from Georgetown Cupcake, the bakery featured on TLC's D.C. Cupcakes.

One challenge in preparing the space was adapting for the change in lighting for the early-evening reception. To manage light and heat, planners installed blackout shades in the Allen Room to keep temperatures down, then removed them just before the party began, showing off the space’s biggest asset: views of Central Park and Columbus Circle.

Shortell said it took one week to set up the presentation space in the auditorium and two days to prepare the vignettes and reception areas. 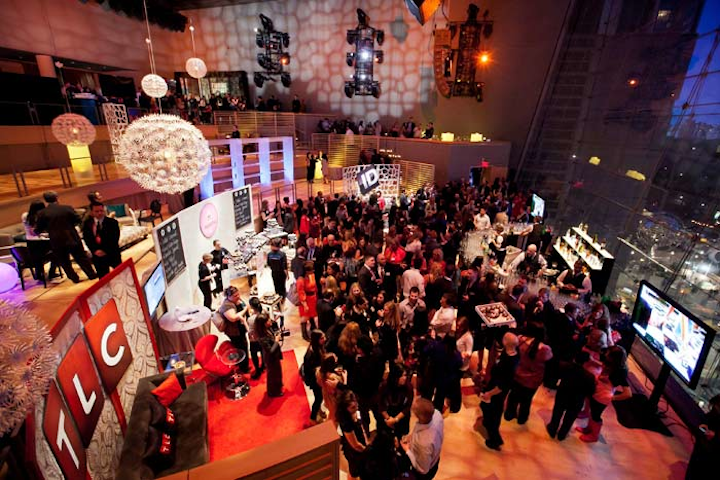 Discovery Communications held its upfront at Jazz at Lincoln Center, taking over the Midtown site's Allen Room for the 1,000-person reception that followed the formal presentation. To give equal weight to its different networks, the company created dedicated vignettes and spread them across the tiered configuration. Each section allowed guests to mingle and take photos with executives and talent.
Photo: ImageLinkPhoto.com 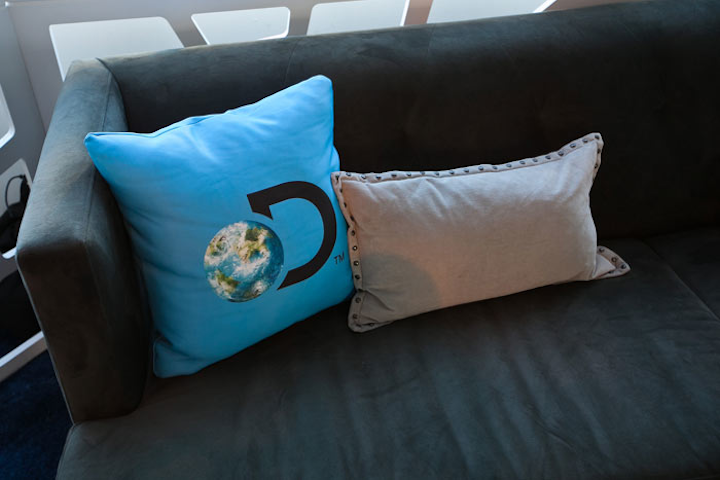 Pillows marked with the logos for each network helped designate where network executives and talent were stationed.
Photo: ImageLinkPhoto.com 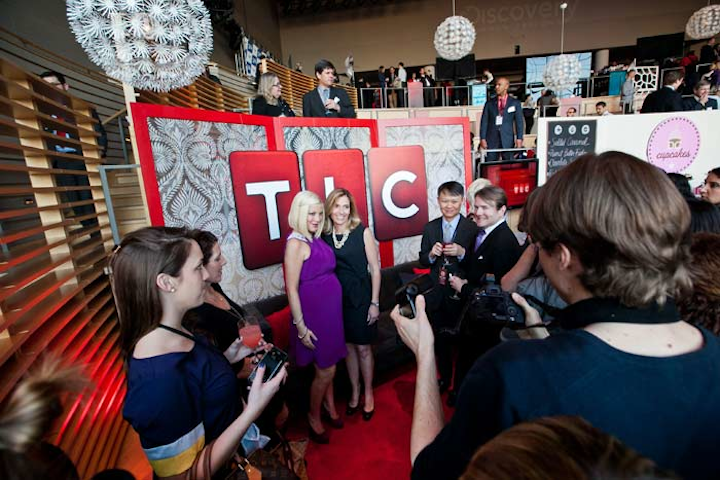 By putting the talent, including Craft Wars producer and host Tori Spelling (pictured), on display at the reception, Discovery was able to create photo opportunities for guests.
Photo: ImageLinkPhoto.com 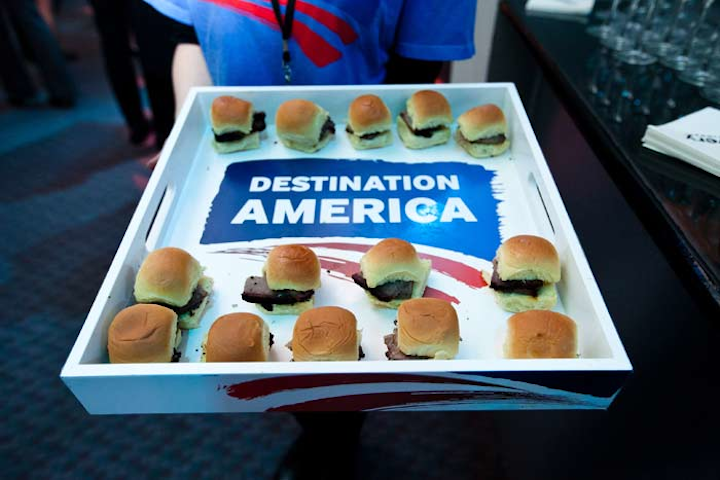 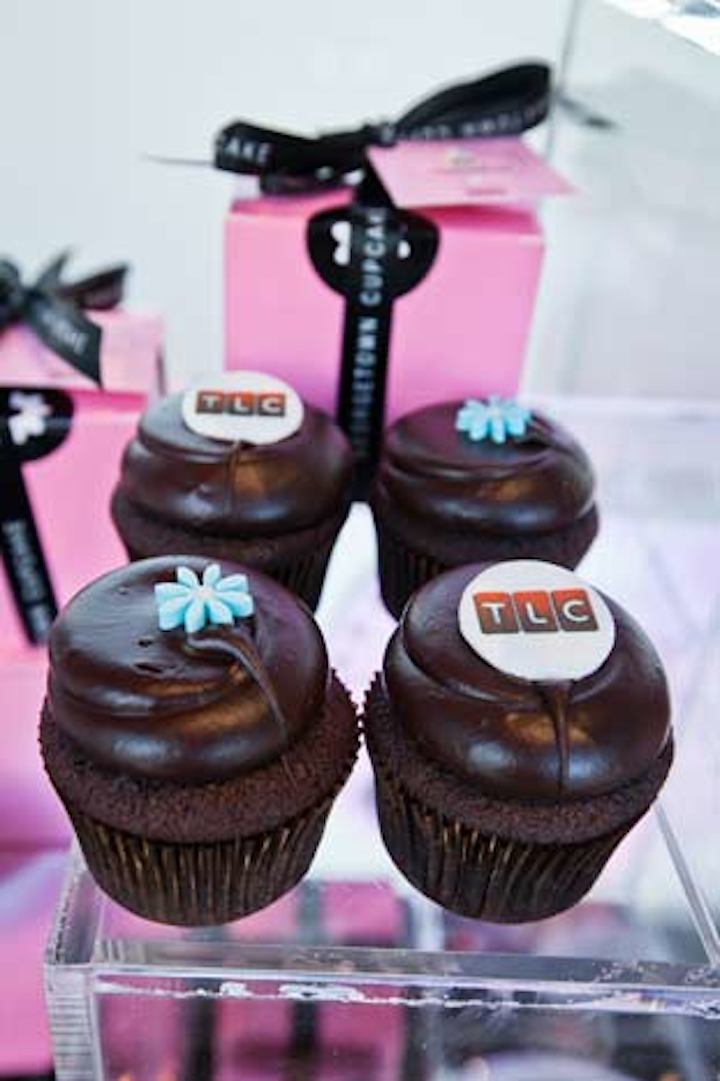