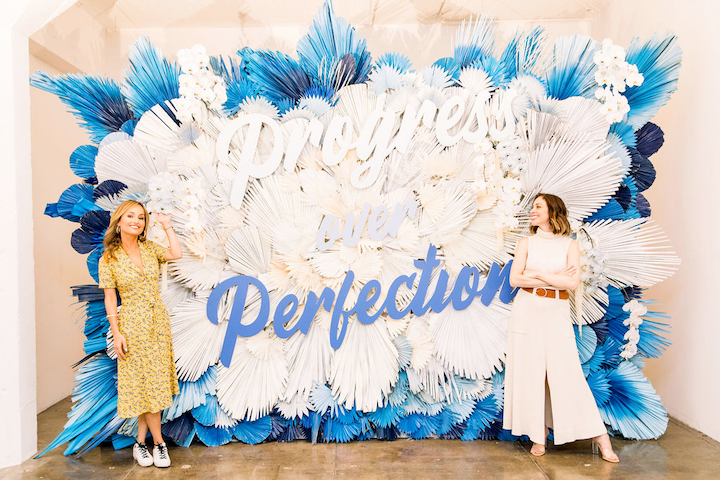 Create & Cultivate hosted its inaugural Self-Care Summit at Hudson Loft on Saturday. More than 500 women listened to talks from Giada De Laurentiis, Tess Holliday, Whitney Port, founder Jaclyn Johnson, and more on topics including self-love and motherhood. Signage throughout the space had inspirational phrases such as "Progress not perfection" and "Life is tough but so are you."
Photo: Becki Smith/Smith House Photo

Paul Gregory has been named executive chef of Double Take at the Hotel Palomar in Beverly Hills. He previously was the executive chef at the West South Coast Plaza Hotel in Costa Mesa.

Jessica Allen is a new account director at HL Group, based in Los Angeles.

In Case You Missed It
Earlier this week, we explored how VidCon attracts "the most media-savvy audience in the world" through creativity-sparking activations from MTV, Facebook, YouTube, and more.

In the News
Dodger Stadium is embarking on a $100-million renovation, expected to be completed in time for the 2020 season. Los Angeles Times: "Spread over two acres, the new center field plaza will include food establishments, a beer garden, two sports bars, a children’s play area, and a space for live pregame and postgame music. Fans will be able to watch the game from above a new batter’s eye in straightaway center field and from standing positions that ring the seating areas. ... Dodger Stadium will host the All-Star Game next season for the first time since 1980."

In June, Saint Laurent staged its spring/summer 2020 menswear show on a boardwalk on a hidden beach in Malibu called Paradise Cove. City officials and residents are now alleging the French brand violated multiple environmental regulations that protect Malibu’s delicate natural resources, which include grunion, a type of fish that were expected to spawn on the sand that evening. City officials said the brand went around the city’s permit approval process by applying for a filming permit from a city contractor, after it was denied an event permit by the local government. Vogue Business: “‘It isn’t clear how much Saint Laurent, which worked with outside contractors on the event, knew about local environmental regulations. Saint Laurent and its corporate parent, Kering, declined to comment. But Kering chief executive and chairman François-Henri Pinault has been made aware of what happened.”

The long-anticipated Alamo Drafthouse finally opened last week, and C.E.O. Tim League is taking the blame for some of the delays. Los Angeles Magazine: “'I’m just a small-town boy country boy that doesn’t understand big city construction,' League says with a laugh. 'I try to be optimistic, but it just takes longer than you think.' After an exhaustive search in Southern California for a location, League had chosen downtown for its recent renaissance, connection to mass transit, and the freedom to design a new space to his specifications—or so he thought. ... 'The constraints of designing a modern theater in a 1970s building, in addition to a redesign after the initial start, attributed to a drawn-out opening schedule,' says Dan Cote, general manager of the Bloc."

Overheard
"The reason you do a [fund-raiser] has to be 50 percent money, 50 percent awareness."

—Nonprofit industry veteran Judy Levy during the Event Innovation Forum at BizBash Live: Los Angeles on Wednesday. Levy suggested raising awareness by bringing in a multi-generational audience, and paying attention to all attendees—not just the ones who bought the tables. Stay tuned to bizbash.com for more insights from BizBash Live next week.

Surprise Event Metric of the Week
813 pounds: the amount of chocolate that San Diego Convention Center caterer Centerplate used to create 4,000 chocolate bars for Comic-Con International. Each year, the caterer creates unique comic-theme chocolate bars to celebrate the event; highlights from this year included the 50/30 bar that commemorated the 50th edition of Comic-Con and 30th anniversary of the convention center. The Centerplate team spent more than 60 hours making the bars.

On the Scene
The Firm Event Design created a 3-D globe made entirely from recyclable materials for National Geographic's T.C.A. showcase at Eataly Los Angeles.

What's Next
Actor Michael B. Jordan and nonprofit Lupus L.A. are hosting the third annual MBJAM on Saturday at Dave & Busters in Hollywood. The family-friendly daytime fund-raiser will have games, prizes, and food. Also on Saturday, Kiehl's is hosting its LifeRide for Amfar event at Cabana at the Westfield Century City.

This weekend also kicks off the nine-day Van's U.S. Open of Surfing, a partnership with the World Surf League and owner IMG. The annual event, held in Huntington Beach, is one of the biggest sports festivals in the world, drawing about a half-million people every year. Related events include a kids-only surf party that raises money for the local Y.M.C.A., as well as a village featuring art exhibitions and creative workshops.