This Week in Los Angeles: the Emmys' After-Party Design, a Pop-Up Museum of Weed, a Table Made From 2,500 Peaches 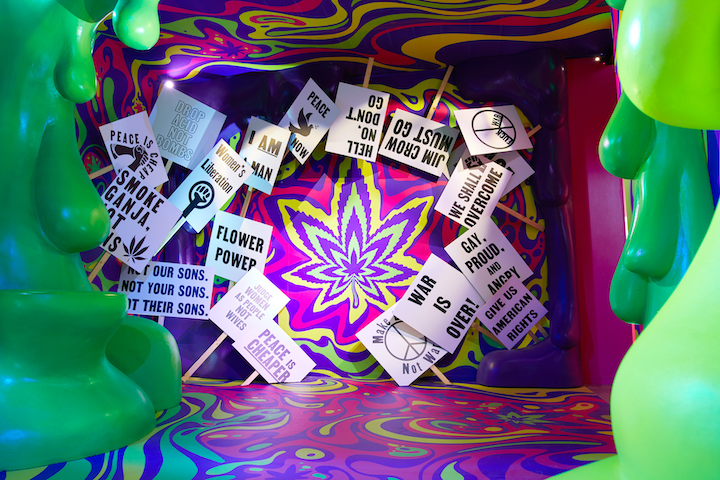 The 30,000-square-foot Weedmaps Museum of Weed opened on August 1 and runs through September 29. The photo-friendly space in Hollywood has a series of interactive rooms and exhibits aimed at upending stereotypes and stigmas, taking on topics such as racially disparate law-enforcement policies, the war on drugs under former presidents Richard Nixon and Ronald Reagan, the latest medical marijuana breakthroughs, and more. Weedmaps worked with creative agency Virtue and producers Let's Play Production on the project.
Photo: Gina Coleman/Weedmaps

Moves & Milestones
The Academy of Motion Picture Arts & Sciences has elected casting director David Rubin as its 35th president. He spoke to the Hollywood Reporter about the Oscars' diversity initiatives, the upcoming Academy Museum, and what it's like to be the organization's first openly gay president.

Previewing the Emmys
On Thursday, the Television Academy released details for the Emmy Awards' official Governors Ball, taking place after both the awards telecast on September 22 and the Creative Arts Emmy Awards the weekend before. The ball will be held at the open-air Event Deck at L.A. Live for the second year, and have a "Brilliance in Motion" theme. Designer Sequoia Productions will create an overhead art installation made of illuminated, multicolored filaments inspired by swirling water; rentals will take on shades of eggplant, magenta, blush, coral, and gold. Patina Catering will serve a tasting menu of small plates.

The 71st Emmy Awards will take place at the Microsoft Theater and air live on Fox; Don Mischer Productions and Done & Dusted will co-produce, and the ceremony will go without a host for the first time since 2003. 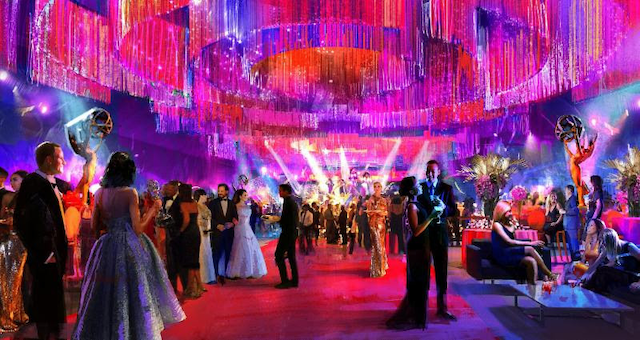 The Emmy Awards after-party will have a colorful "Brilliance in Motion" design.Rendering: Courtesy of the Television Academy

In Case You Missed It
On BizBash.com this week, we highlighted new products, companies, and trends that stood out on the BizBash Live: Los Angeles exhibit floor. We also took a look south, rounding up the coolest activations, parties, and booths from Comic-Con International in San Diego.

Surprise Event Metric of the Week
30 cents: The price Chevron Santa Monica will be charging for a gallon of gas on August 15. It's part of Amazon Prime Video's "Maisel Day," a promotion for The Marvelous Mrs. Maisel that's bringing 1959 prices to more than 25 retailers around Los Angeles. A one-night stay at the Hollywood Roosevelt is going for $40, for example, while a movie ticket at the Bay Theatre in Pacific Palisades will cost 50 cents. See the full list of participants at maiselday.com.

In the News
The Hollywood & Highland shopping center has been sold to real estate equity firms DJM Capital Partners and Gaw Capital. Curbed: "The sale price was not disclosed, but a release from DJM claims it was the largest single-asset retail transaction to take place outside of Manhattan in nearly three years. ... [Hollywood & Highland] is the location of the Dolby Theatre, which hosts the Oscars. The theater was not included in the transaction. DJM and Gaw are planning a suite of renovations, with work slated to begin next year and wrap up in 2021."

Kerry Brougher, the director of the soon-to-be-open Academy Museum of Motion Pictures, has stepped down. The Hollywood Reporter: "The project has encountered a series of obstacles—it is running over-budget, its opening has been delayed several times, and Brougher's top deputy, Deborah Horowitz, left the project in April. Now, as it nears its completion, the 66-year-old Brougher has decided to return to his roots in the art world. ... Brougher's curatorial team will see the project through to its finish."

Venue Buzz
Eater Los Angeles has a deep-dive into Lowell Farms: A Cannabis Cafe, the L.A. area's first cannabis restaurant opening in West Hollywood in September. While the menu will not actually include any cannabis-infused food due to state regulations, guests will be allowed to smoke or vape at their tables. Chef Andrea Drummer is designing a food menu meant to complement the cannabis, and mocktails will be served. "Expect table-side service from a 'flower host,' where a staff member selects a strain from Lowell Farms, then rolls a joint on the spot," reported Eater.

The InterContinental Los Angeles Downtown has recently been named a AAA Four Diamond hotel by the Automobile Club of Southern California.

Overheard
"It's our job to assess how to elevate the program … The Oscars did very well. That was something we paid attention to. This is a unique year for some of America's favorite shows and producers came to the conclusion that spending more time on those was the right thing to do."

What's Next
As we mentioned last week, Beautycon takes over the Los Angeles Convention Center tomorrow and Sunday. Also this weekend is the 2019 Teen Choice Awards, taking place in Hermosa Beach on Sunday. Lucy Hale and David Dobrik will host, and Avengers: Endgame leads the way with nine nominations. The event will air on Fox.

Looking ahead, networking group Fete Los Angeles will gather at the Hollywood Bowl on August 13.