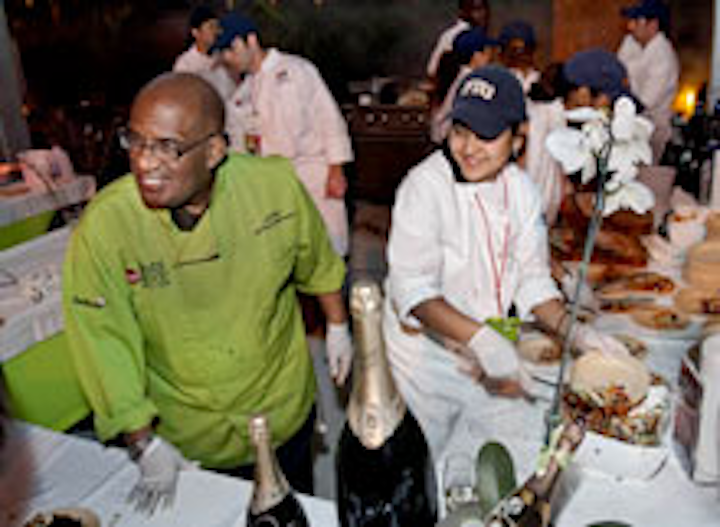 Rachael Ray will once again host Burger Bash tomorrow night in a 28,000-square-foot tent behind the Ritz-Carlton, South Beach. The grilling competition will pit 28 local restaurants and celebrity chefs, including Rocco DiSpirito, against each other for the coveted Amstel Light People’s Choice Award, among other honors, as determined by event attendees.

On Friday Emeril Lagasse will host BubbleQ, which chef Tom Colicchio presided over last year, on the sands behind the Delano. Perrier-Jouët Champagne is once again sponsoring the barbecue-meets-champagne cocktail party with 30 local restaurants participating, four more than in 2009. Further north on Miami Beach, Wine Spectator magazine is again hosting its Best of the Best wine, champagne, and food showcase at the Fontainebleau hotel for the second year in a row.

The Grand Tasting Village, where multiple tents create a 150,000-square-foot event footprint on the sands of South Beach, opens on Saturday for two days of exhibitions. The two main tasting tents, sponsored by American Express, have table displays from 38 restaurants and caterers alongside 100 wineries and spirit companies. Sponsors like Evian, Florida International University, KitchenAid and 20 others will also have separate tents with product tasting and food demonstrations.

The festival wraps up on Sunday night with the Luna En Fuego at the Gansevoort South, sponsored by Cigar Aficionado, Miami New Times, and Gnarly Head Wines. Guy Fieri will host the Latin-themed party at the hotel's beach club.