To stand out among the more than 60 exhibitors at the New York International Auto Show, car brands used game shows, faux newscasts, and pyrotechnics to upstage the competition.

Anna Sekula
At the New York International Auto Show, an expo that crowds more than 1,000 vehicles and more than a million attendees into the Jacob K. Javits Convention Center every year, car makers are constantly vying for the spotlight. This year the most attention-grabbing marketing ploys seemed to be the loudest. Live game-show competitions, newscast-style entertainment, and noisy pyrotechnics piqued the curiosity of mobs of journalists and the public. Opening to the press last Wednesday, the show debuted new vehicles from more than 20 manufacturers and will run through Sunday.Hyundai made a statement at its Wednesday-afternoon press conference, where it debuted its new sports coupe. To add some energy to the 20-minute presentation, set designers built a 150-foot-wide car rally platform in the galleria pavilion, on which professional drivers raced around in the vehicles, accompanied by the bangs, sparks, and smoke of pyrotechnics. Adding to this was music from the band Joe Rockstar, which covered tunes such as Third Eye Blind's "Semi-Charmed Life." After brief remarks from executives John Krafcik, Dave Zuchowski, and Joel Piaskowski, the platform was set with cocktail tables and food, and members of the media were invited to view the car up close.

On Friday, at the public sneak preview, the booths for Toyota and AutoTrader.com stood out among dozens of bright displays and moving parts with the help of actors. For the Japanese automaker it was Kristyn Burtt and Matt Troyer, who hosted Toyota Live—a talk-show-like newscast—from a circular platform. And for the Web-based company, Andrew McMasters acted as game-show host for a Jeopardy-style competition that quizzed contestants on their knowledge of automotive and pop culture.

On the flip side, Audi's more subtle ruse was food. Last Wednesday the draw was a menu of nibbles and desserts crafted by Top Chef season-three winner Hung Hyunh, supplied in the booth's upper-level lounge. 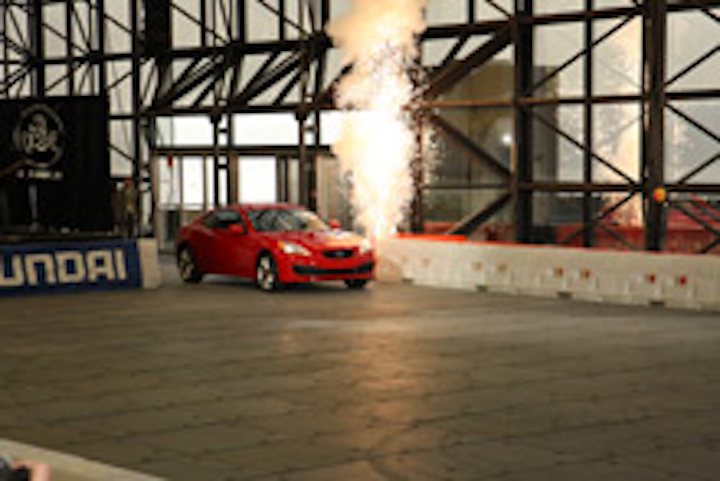 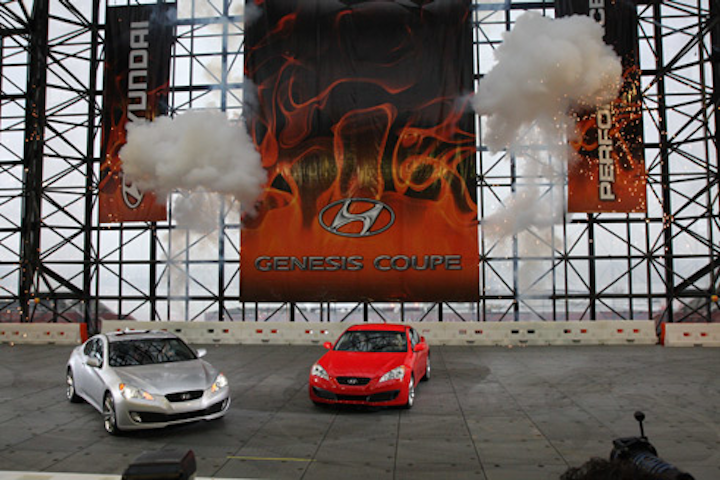 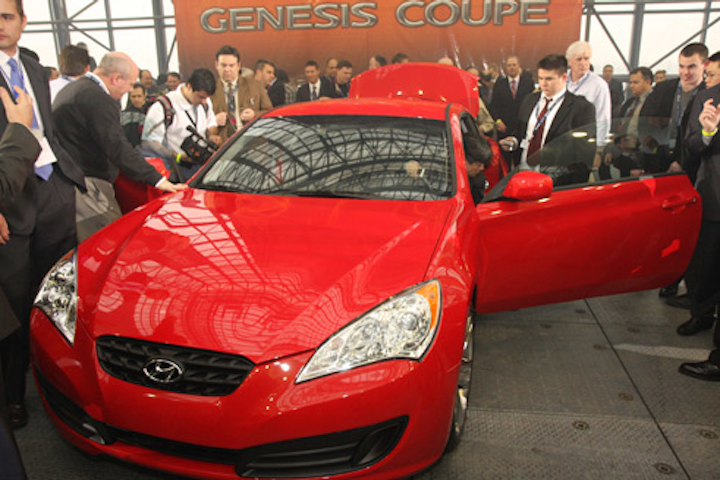 The stage of Hyundai's press conference became the site of a cocktail reception that, aside from providing drinks, food, and music from the band Joe Rockstar, allowed journalists to inspect the vehicles.
Photo: Chris Ross for BizBash 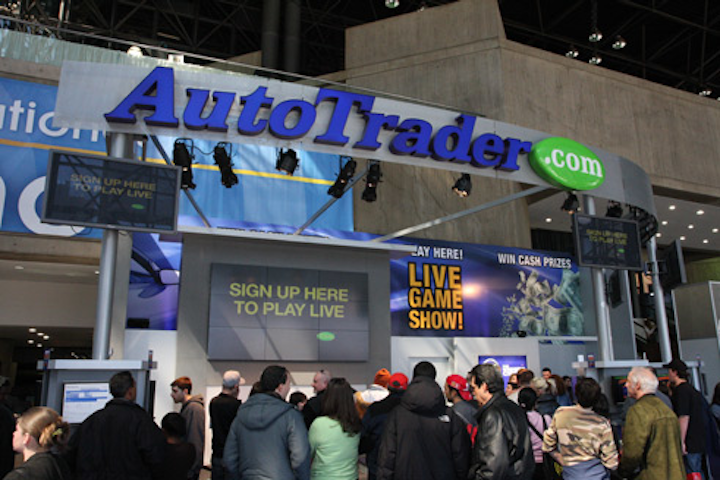 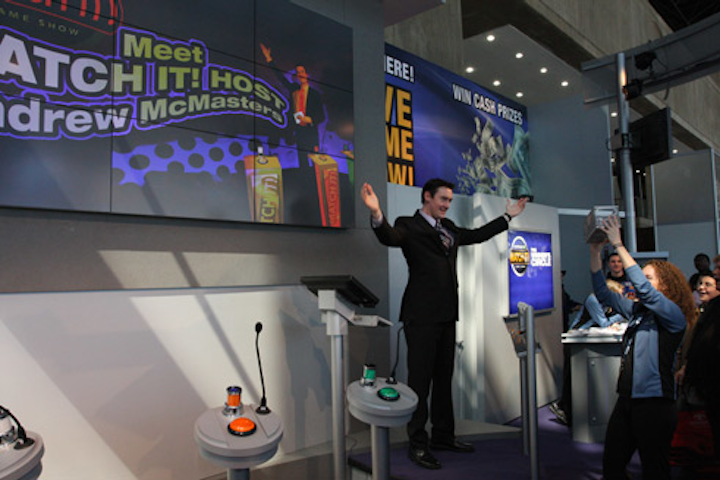 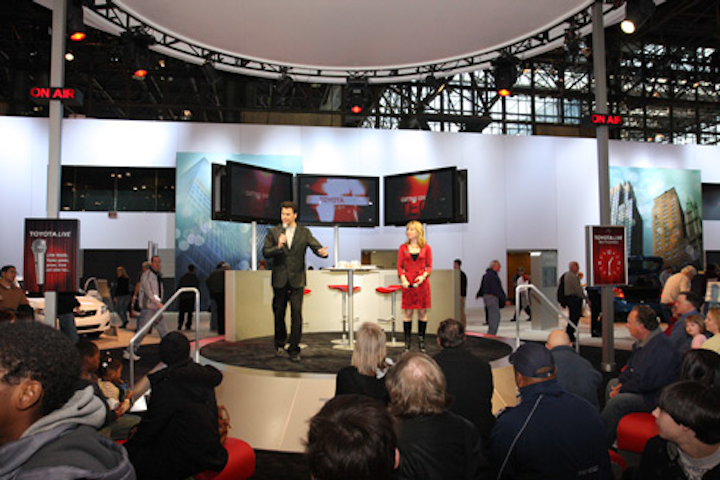 Kristyn Burtt and Matt Troyer acted as news anchors for Toyota Live, providing commentary on other areas of the booth and giving away freebies like logoed mugs and candy.
Photo: Chris Ross for BizBash 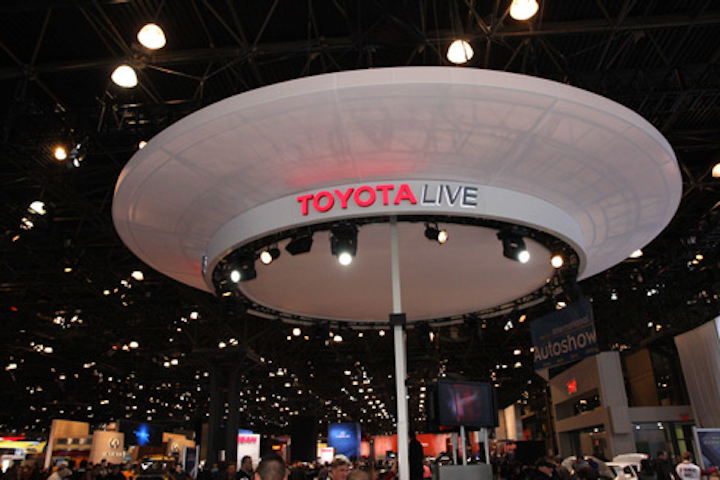 Within Toyota's sizable booth was a circular platform—complete with "On Air" signs, bright lights, and seating—in which the hourly Toyota Live broadcast took place.
Photo: Chris Ross for BizBash 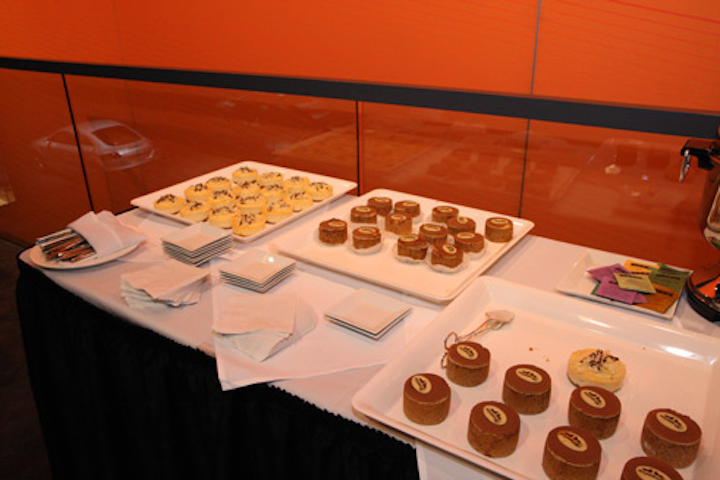 For the media days last week, Audi's booth served up a selection of food created by Hung Huynh, the winner of the third season of Top Chef.
Photo: Chris Ross for BizBash 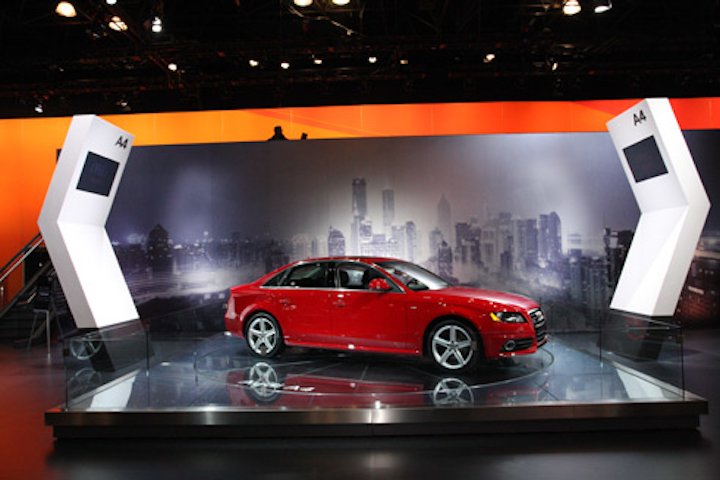 The food in Audi's area of the show floor was served in a lounge situated atop its booth.
Photo: Chris Ross for BizBash
More in New York City & Tri-State Area