Bolstered by continually strong sales of its Wii console and popular titles like Mario Kart, Nintendo chose to broaden its marketing to video gamers with a nationwide search for the best players of the motion-control system. The two-month-long contest, dubbed the "Wii Games: Summer 2010," is open to competitors as young as six and as old as 60, and includes more than 150 qualifying events at shopping centers and Six Flags amusement parks in 17 states during July and August.

To kick off the summer hunt, the Japanese electronics giant built a two-story tent in Jersey City's Liberty State Park on Friday and trotted out Wii Games ambassador and gold-winning Olympic gymnast Shawn Johnson. To bring in more gamers from the under-13 demographic, Nintendo worked with the New York City Department of Parks and Recreation's summer camp programs, including the St. James Recreation Center in the Bronx, Brooklyn's Brownsville Recreation Center, Kissena Park in Queens, and Manhattan's John Hansborough Recreation Center. Nintendo even created a special competition category for those over 55 years old, a group that represents about 25 percent of video game players.

The ground floor of the tent was dedicated to tournament play, with booths down the center for Sports Resort's bowling and basketball, the coin battle mode of New Super Mario Brothers, the Hula-hoop routine of Wii Fit Plus, and Mario Kart's time trial; warm-up areas and T-shirt printing stations lined the perimeter. For spectators and those taking a break between battles, the upper level housed stalls for more relaxed activities and included demos of new titles like Super Mario Galaxy 2.

Throughout the rest of summer, the Wii Games Summer 2010 competition will head across the country, including stops in Colorado, North Carolina, Texas, Virgina, Ohio, Missouri, and Arizona, before finishing up with a championship in Los Angeles in September. 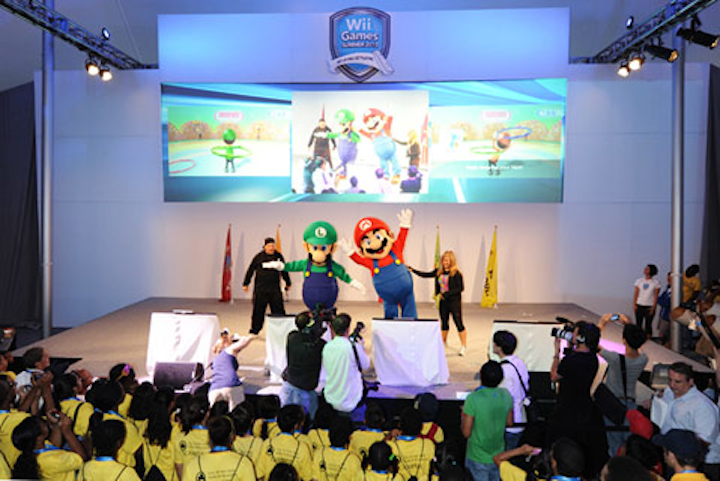 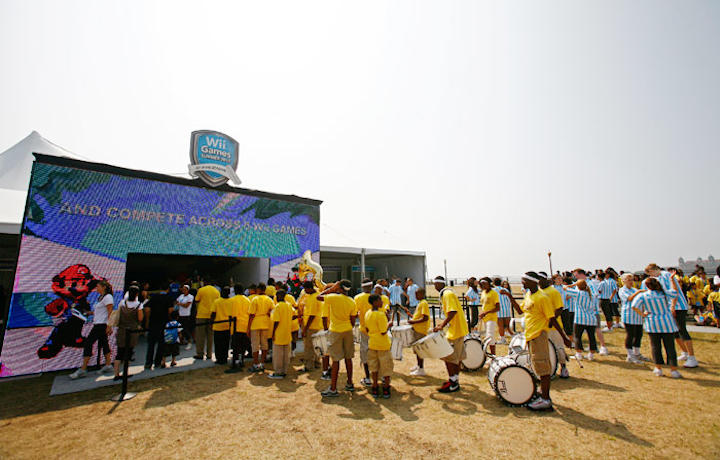 Under a tent on the South Lawn of Liberty State Park, Nintendo's Wii Games saw hundreds of attendees, including groups of kids from eight of the New York Department of Parks and Recreation's summer camps.
Photo: Courtesy of Nintendo of America 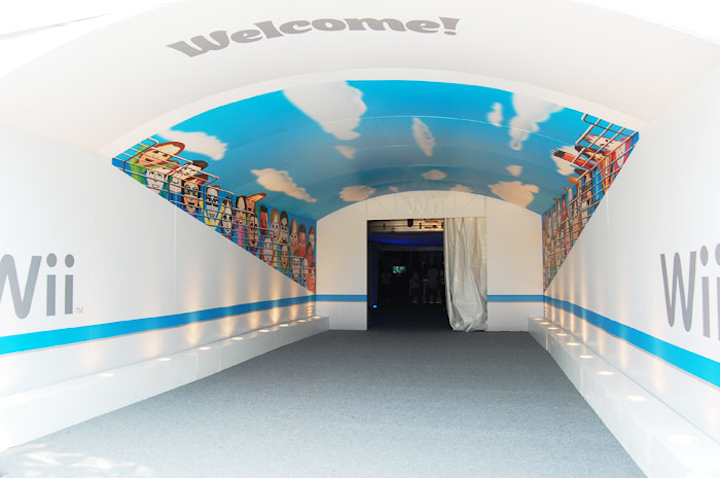 Nintendo applied Wii branding and Mii (the digital characters created by users) graphics to many areas of the site, including the tent's tunnel-like entrance hall.
Photo: BizBash 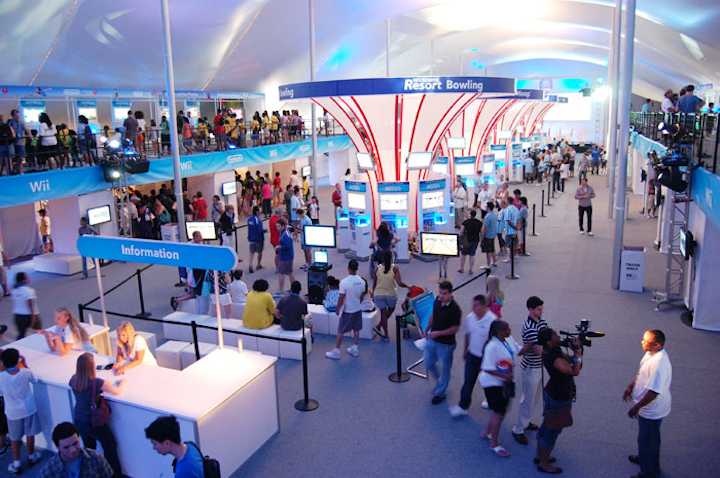 Inside the air-conditioned bilevel space, gamers showed off their skills at booths that ran down the center.
Photo: BizBash 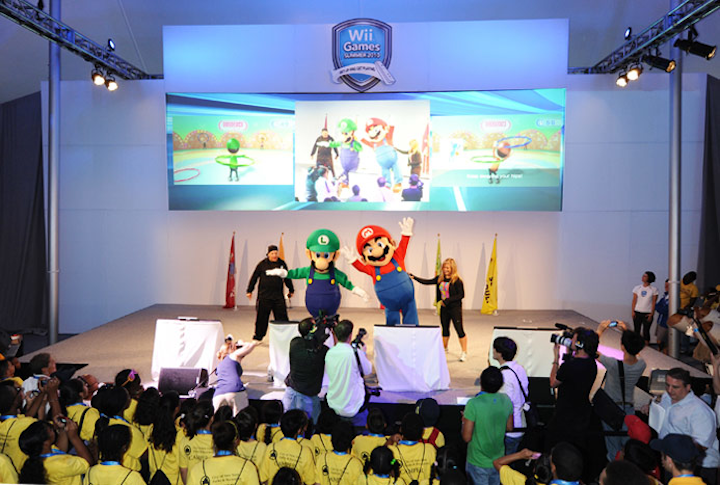 Nintendo launched Friday's festivities with a procession led by Olympic gymnast Shawn Johnson and actors in Mario and Luigi costumes. The iconic Nintendo characters took to the stage to welcome participating teams with a Wii Fit Plus Hula-hoop challenge.
Photo: Courtesy of Nintendo of America 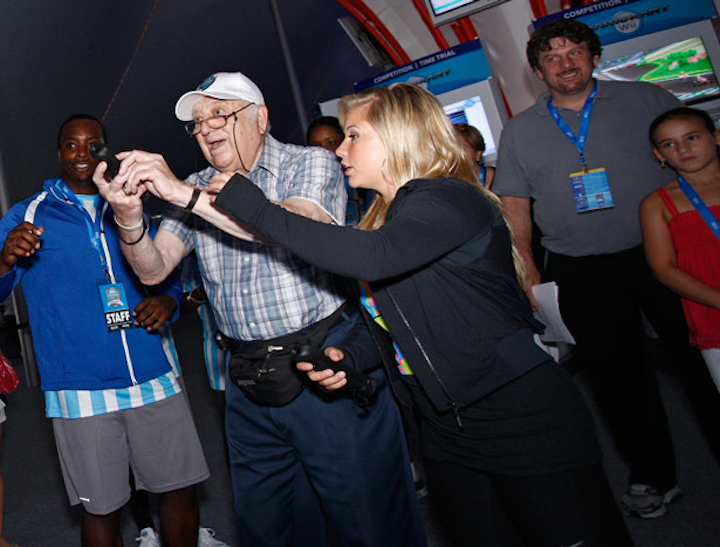 A big part of the marketing effort is to reach Wii consumers of all ages, including the 25 percent that are more than 55. The kickoff saw players like 80-year-old Tony Rotella (left) learn games alongside ambassador Shawn Johnson.
Photo: Courtesy of Nintendo of America 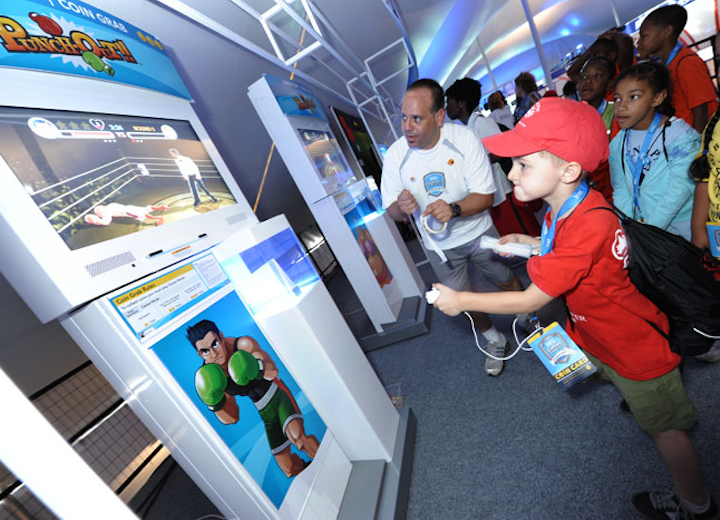