For the fifth anniversary of the LG Innovator’s Ball, held on the fifth day of the fifth month, the Ontario Science Centre focused on deceiving guests’ five senses. Rather than basing the event’s theme around a current exhibit, the centre instead embraced its everyday mandate and encouraged guests to explore and learn. Matt Wiesenfeld, head of annual giving at the Science Centre, said, “We really wanted [guests] to have all the elegance, wonder, and excitement that comes with these events, but we also wanted them to see how being at the Science Centre is a different experience.“

The evening began and ended in the great hall (where, in years past, the dinner has taken place) with a cocktail hour and an after-party for 700 guests. Sponsor booths and hors d’oeuvres stations lined the large room, with McNabb Roick handling production and Westbury National Show Systems taking on the lighting and audiovisual production. The DJ booth overlooked an illuminated LED dance floor, bordered by black tables and steel stools. Cocktails like the LG Optimus (vanilla vodka mixed with cranberry and orange juices) and Telus-tini (Iceberg Vodka, dry vermouth, and a fresh sprig of rosemary) were served at a large, circular bar.

Chef Tawfik Shehata designed the three-course dinner, prepared by Marigolds & Onions, to stimulate the senses. Held in exhibition hall, the first course was served in complete darkness, awakening the 470 guests’ sense of taste. Dessert was playful: A “hamburger” made with a brioche bun, a fig and date patty, and almond marzipan was served with fries of toasted sponge cake and raspberry “ketchup.”

Interactive sponsor activations were plentiful—guests could get a 3-D picture taken by LG, enjoy complimentary manicures courtesy of Joe Fresh, or relax in the Porter Airlines lounge. “We encourage [the sponsors] to bring ideas to the table and find ways to integrate it with the brand,” Wiesenfeld said. “We want to help them bring their brands to life and have an impact on our guests.” 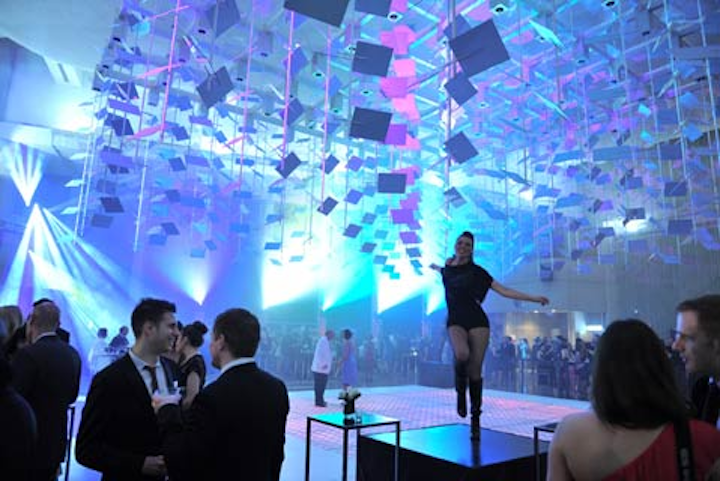 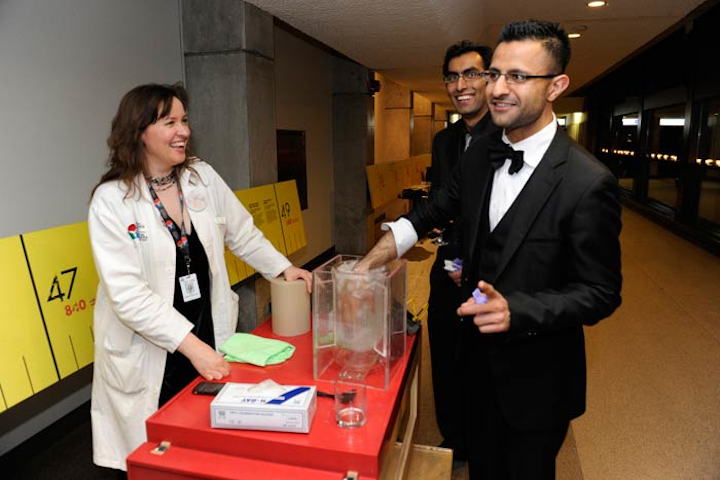 The Science Centre deceived guests' senses, encouraging them to explore and learn at interactive stations, including one that involved plunging a hand into ice water.
Photo: Gary Beechey for BizBash 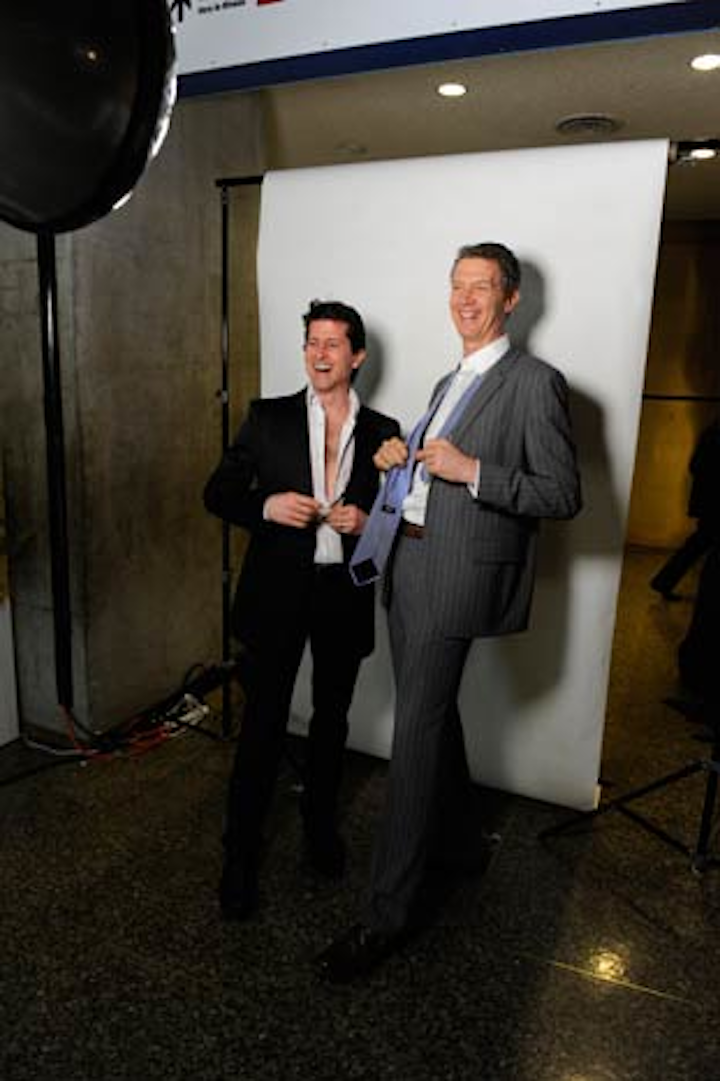 Telus hosted a flip-book station, where guests could pose for several images that were then turned into a flip book.
Photo: Gary Beechey for BizBash 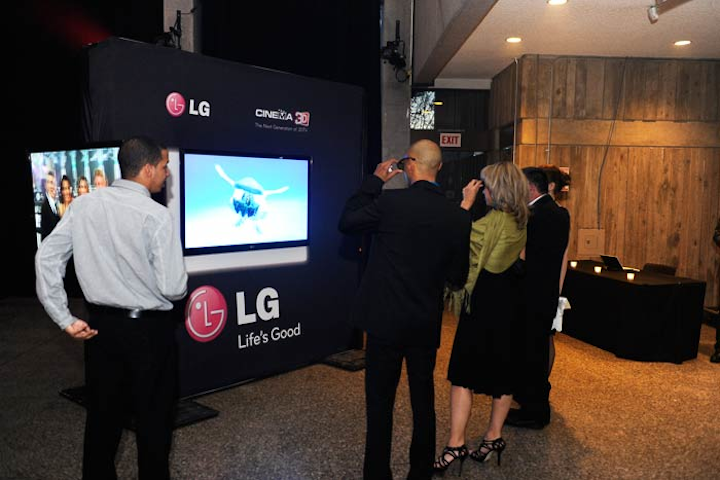 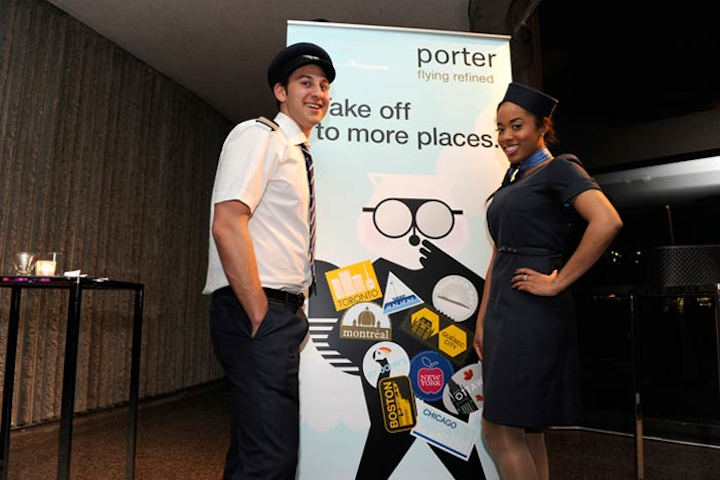 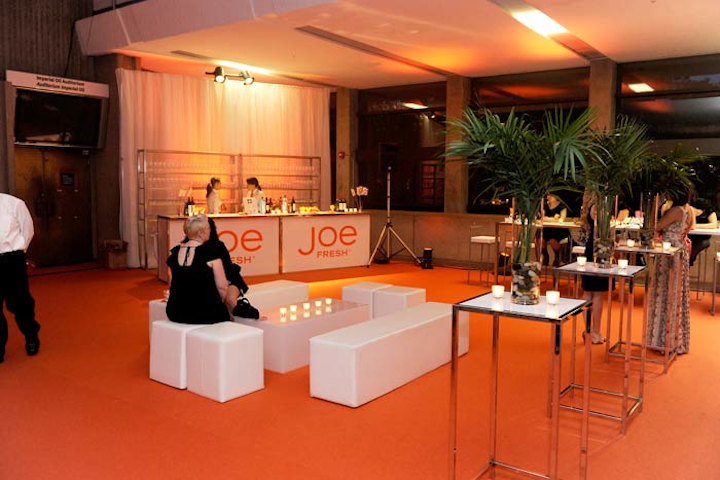 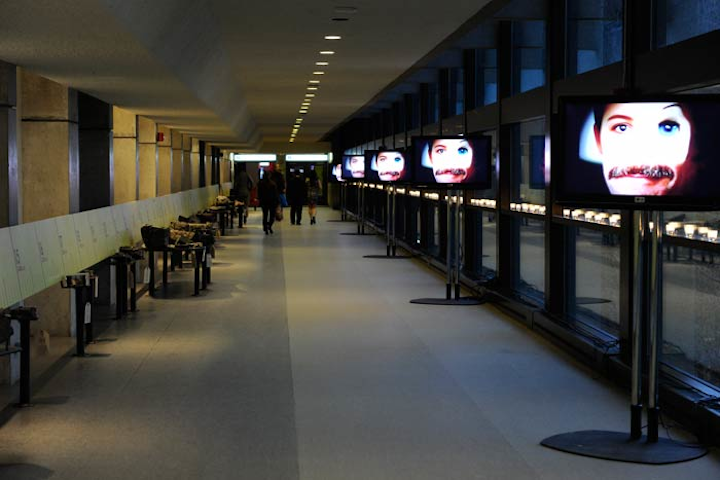 Shifting faces (screened on LG TVs) toyed with guests' senses as they made their way to exhibition hall for the three-course dinner.
Photo: Gary Beechey for BizBash 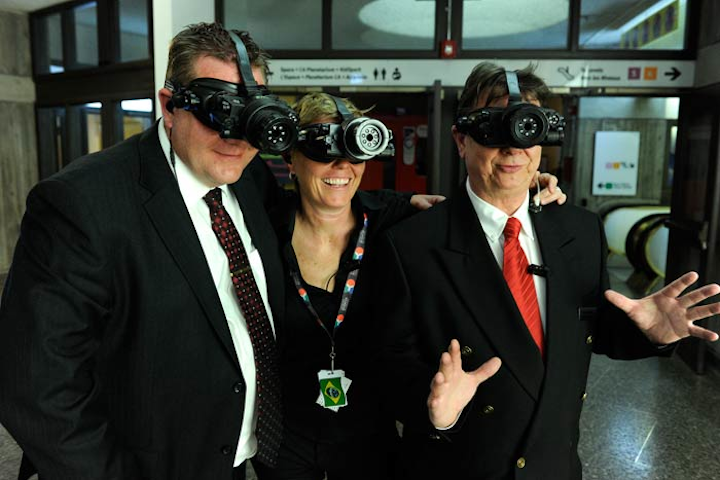 During the dinner's first course, which was served in the dark, security wore night vision goggles to assist guests.
Photo: Gary Beechey for BizBash 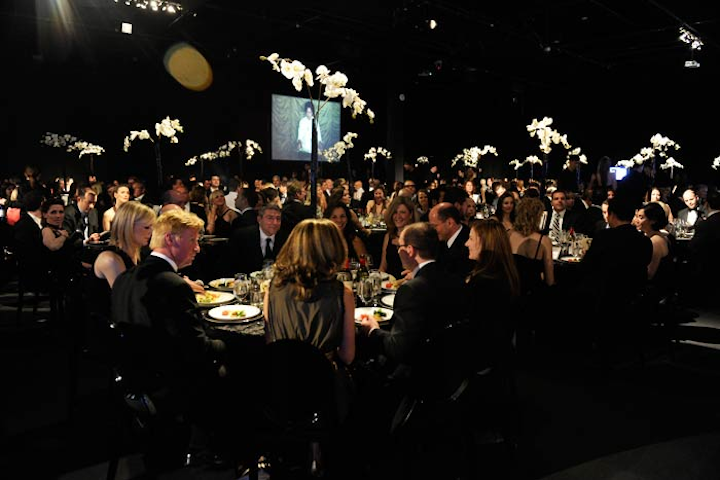 Dimly lit and draped in black, from the walls to the table linens, the dinner space felt intimate despite its size. Tall arrangements of orchids reached above diners, providing the centerpieces for each table.
Photo: Gary Beechey for BizBash 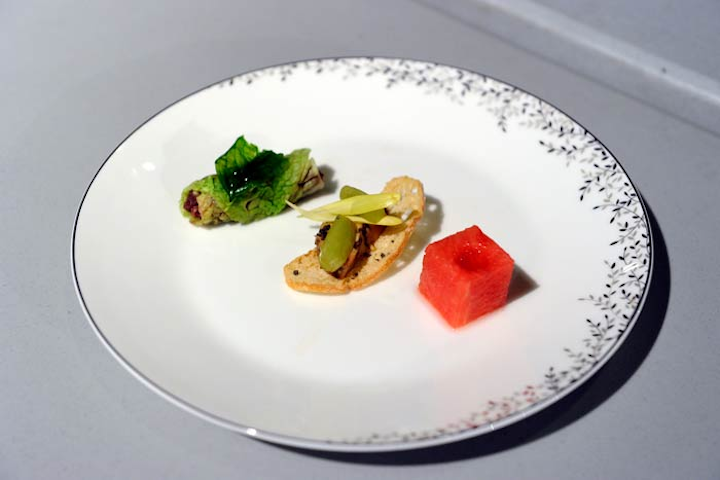 The first course of salt-cured foie gras, ostrich tartare, and a watermelon cube was served in complete darkness to heighten diners' sense of taste.
Photo: Gary Beechey for BizBash 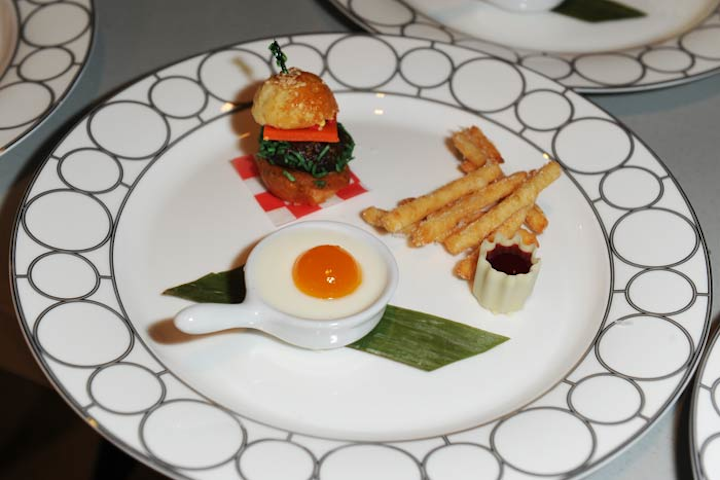 Dessert was a “hamburger” made with a brioche bun, a fig and date patty, and almond marzipan, served with fries of toasted sponge cake and raspberry “ketchup.”
Photo: George Pimentel 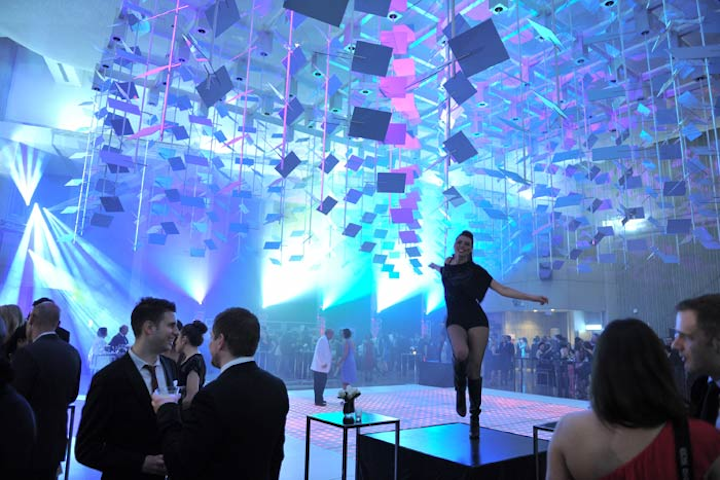 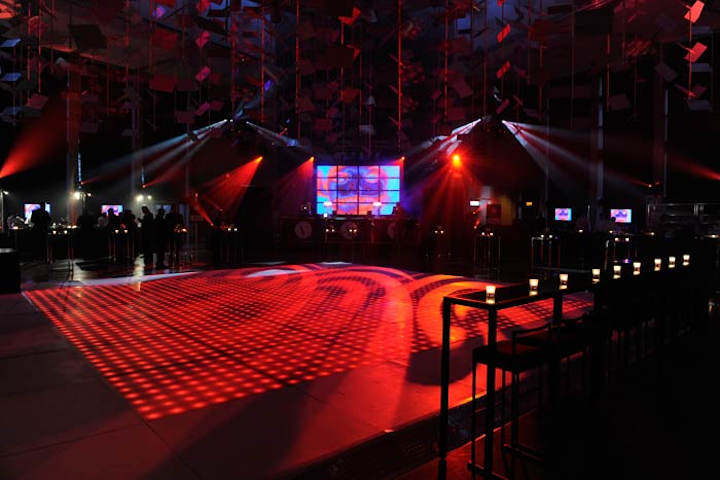 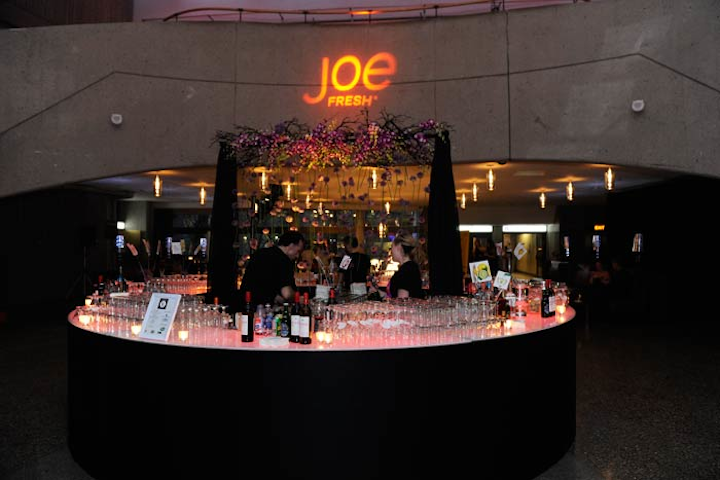 Drinks like the LG Optimus and the Telus-tini were served at a circular bar.
Photo: Gary Beechey for BizBash 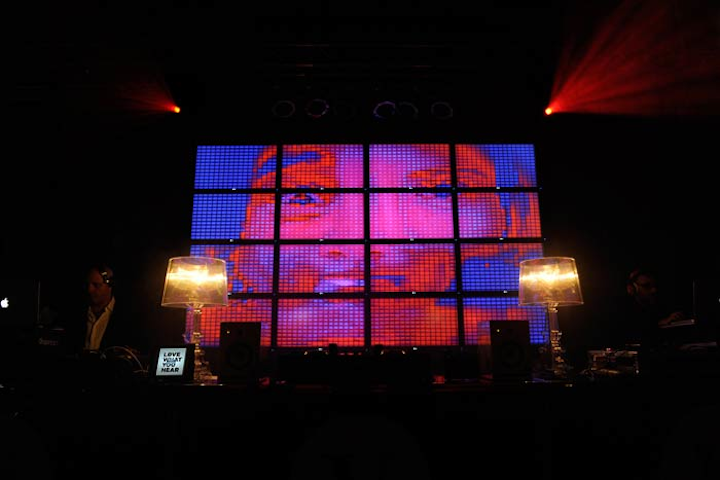