No one throws a party quite like Donatella Versace. On Tuesday night, the doyenne behind the iconic fashion label hosted a multifaceted bash on the Hudson River to celebrate her collaboration with H&M—a line set to launch globally November 19—which had several attendees harking back to prerecession days. “This is so Versace circa 1990s,” quipped more than one guest.

With multiple components—from a cocktail reception and fashion show to a live concert and pop-up shop—the all-night affair saw guests arriving at 8 p.m. and many not leaving until 3 a.m. when the temporary store closed. It all took place at Pier 57, a site that recently hosted the New York City Wine & Food Festival and the Whitney Gala, dubbed “Versace for H&M Hall on the Hudson” for the night. “I wanted to bring the Versace glamour back to New York,” Versace said. “After all, tonight is all about presenting the very best of the House of Versace.”

Using sets inspired by the commercial H&M produced for the special collection, KCD senior vice president of production and managing director Keith Baptista set about building a space he described as “surreal, sexy, and glamorous.” The evening caused quite a stir, with some 700 invited guests, live performances by Nicki Minaj and Prince, and a number of high-profile names in attendance, including Jessica Alba, Sofia Coppola, Blake Lively, Jennifer Hudson, and Uma Thurman.

“It is extremely important to H&M to keep the vibrant heritage of the brand,” said Jennifer Ward, the U.S. public relations and events manager for H&M. “It was a collaboration between H&M and Versace to make this one of the year’s biggest fashion events and an exciting change for a whole new audience to wear Versace.”

For the fete, KCD took over from Bureau Betak—the company behind last year’s Lanvin for H&M fashion show—building on a existing relationship with Versace as its long-standing Milan Fashion Week show producer. This H&M event, however, marked the first such time KCD worked on the Swedish retailer’s designer collaboration shows, although it did produce the 2005 H&M fashion show in Central Park. “The Versace and Lanvin collections were very different,” said Baptista, who added that planning began in June. “Lanvin was very successful for H&M and it wasn’t our goal to top it, but rather to create something that was perfect for the Versace collection for H&M.”

Indeed, given the dramatic increase in space from the Pierre to Pier 57, Baptista and his counterparts at H&M had plenty of room to work with—32,000 square feet to be precise, a number that doesn't include the section for backstage. "The [Pier 57] area was always best known for the best underground clubs, and we wanted to recreate that feeling," Ward said.

The producers created four rooms inside the vast site, looking to parallel the commercial where the collection is represented in different rooms of Donatella Versace's manse. There was even a custom soundtrack created by Victor Calderone that played Versace uttering the phrase "My house, my rules, my pleasure." A mirrored hall with gold molding formed the cocktail space, a black- and gold-colored theater housed the 43-look runway show; a Miami-style nightclub served as the site for the musical performance; and a more open, gallerylike area was set up as the temporary store. Each room had concealed doors that models opened once guests were invited into the next space. And although the producers certainly used a large chunk of the pier, the sections were configured in a way that never felt too overwhelming, too expansive, or too tiring to travel between.

With four large events being produced for the event, the timeline was very tight for the installation. According to Baptista, it took 12 days to build out the entire venue, including bringing heating, electricity, and bathrooms into the completely raw space; teardown took four days. But it wasn't all wasteful—biodiesel fuel was used to power the soiree, and all elements that could be recycled were.

In terms of catering, passed hors d'oeuvres from Olivier Cheng followed a loose Mexican theme and included seared rare tuna on a corn pancake with avocado salsa, lobster tacos with cabbage and salsa verde, mini Cuban sandwiches, and red and gold beet, chèvre, and date tartlets. For a true nightclub experience, there was table service and buckets filled with vodka and champagne for guests, while a Cuban/Latin-inspired cocktail was butlered in the performance area following the fashion presentation. 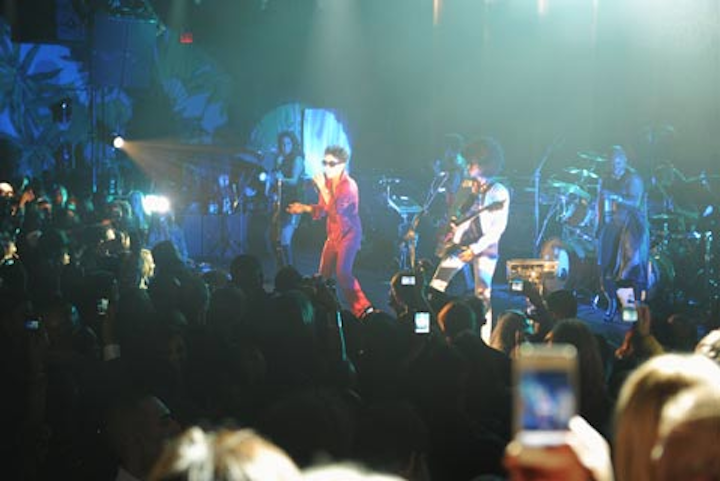 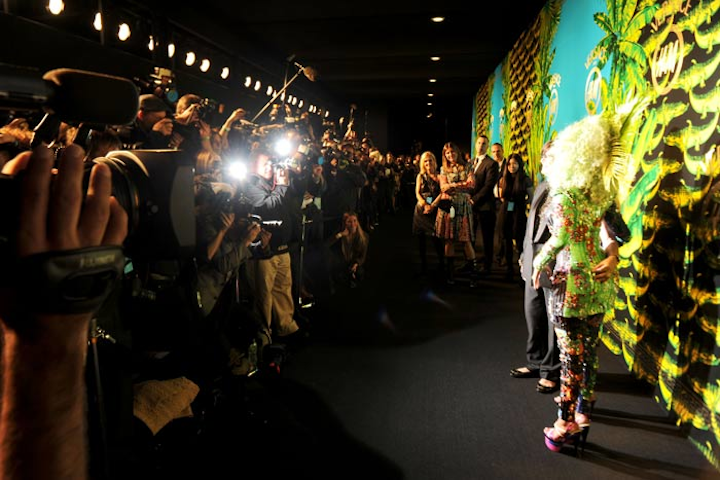 Rather than having guests arrive at a splashy and conspicuous entrance, the event's organizers erected a massive 12-foot-tall step-and-repeat covered with Versace for H&M neon green crocodiles and a palm-print motif inside Pier 57 for V.I.P. arrivals. A 100-foot-long black carpet replaced the traditional red, where attendees like Nicki Minaj, Donatella Versace, and H&M creative advisor Margareta van den Bosch (pictured) posed for the crowd of photographers.
Photo: David X. Prutting/BFAnyc.com 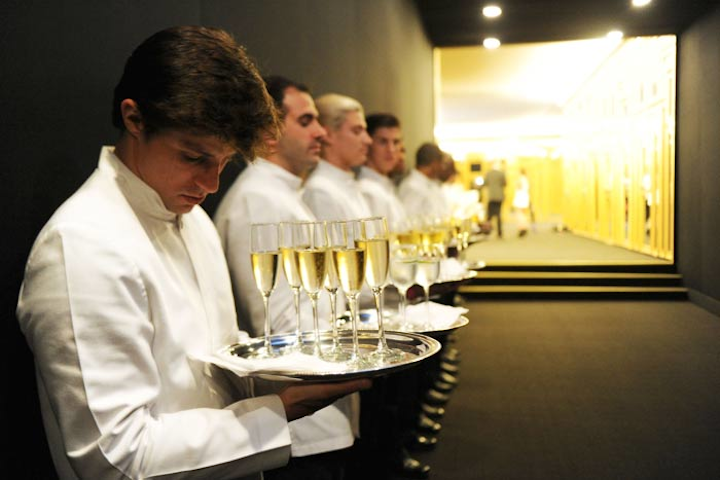 A phalanx of waiters offered drinks to guests as they made their way down the long black carpeted hallway from arrivals into the cocktail lounge.
Photo: David X. Prutting/BFAnyc.com 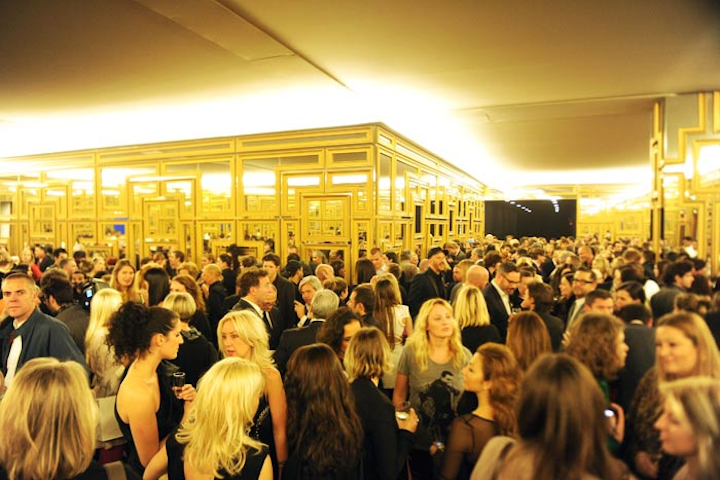 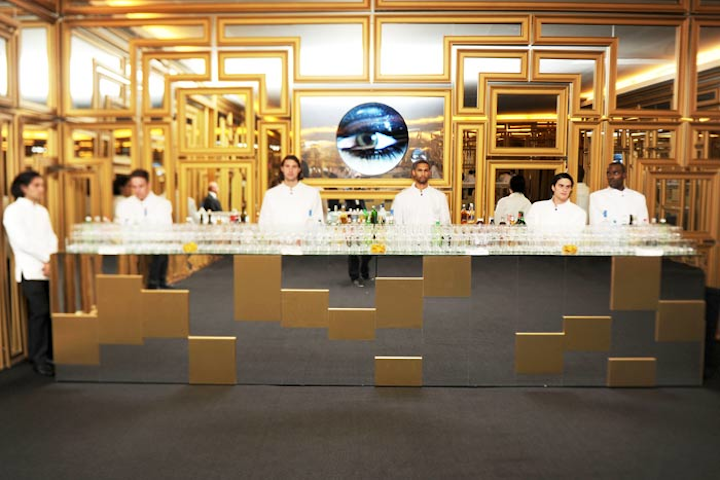 Two large mirror-covered bars flanked the cocktail lounge area. In a play on the Versace for H&M commercial, decals of Donatella Versace's eye were placed strategically on select mirrors, intended to look as though the fashion designer were watching over the action.
Photo: David X. Prutting/BFAnyc.com 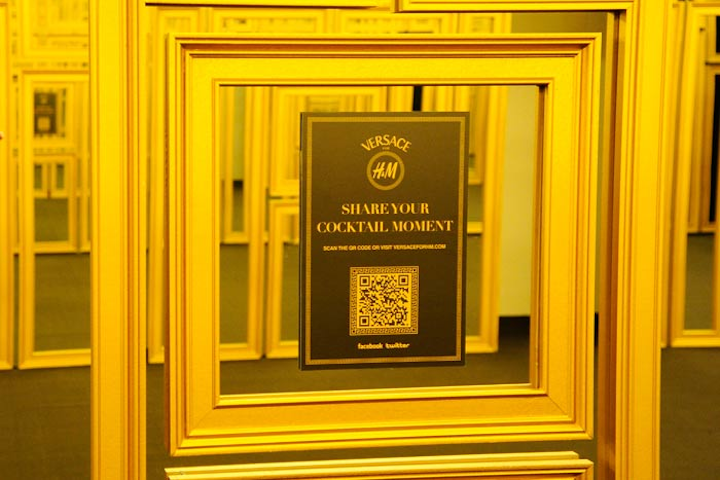 Embracing social media as a tool for invited guests to share their experiences at the show, Versace and H&M lined the entrance hall with large QR code signs, so that information could be spread quickly via Twitter and Facebook.
Photo: Nicholas Hunt/PatrickMcMullan.com 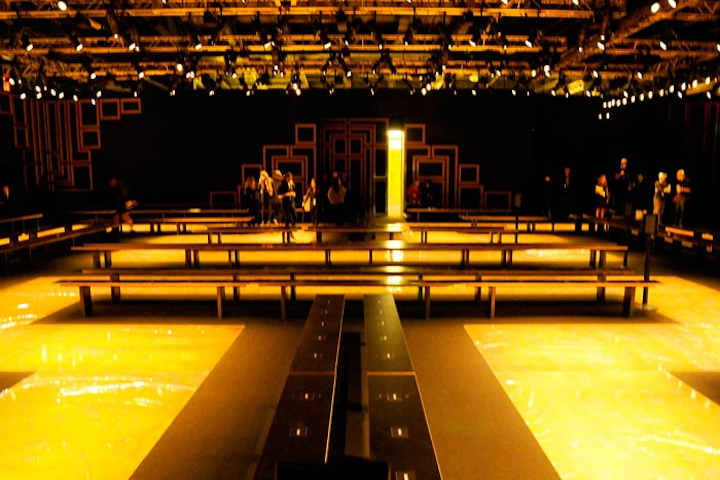 Signaling the end of cocktails, models pulled open a series of doors and waved guests into the 10,000-square-foot fashion show venue. The runway was designed with a Greek motif and maze surrounded by 16-foot-tall walls. Since the collaboration is about making Versace accessible, it was important for the seating configuration to be democratic and give the majority of guests a front-row view, rather than the typical multitiered bleacher setup.
Photo: Nicholas Hunt/PatrickMcMullan.com 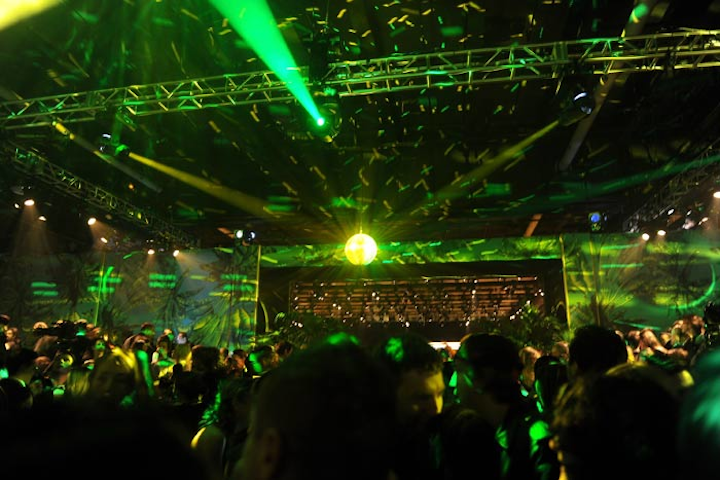 As Donatella Versace took her runway bow, she exited straight through a set of doors that opened to reveal the after-party. Measuring 12,000 square feet, the section was designed to resemble a Miami nightclub, with huge sheets of palm-print-patterned wallpaper covering the walls and disco balls hanging overhead. A custom stage was erected to accommodate performances by Nicki Minaj and Prince, while tiered, banquet-style seating was made available to all guests. The fashion designer hosted a V.I.P. section off to stage left.
Photo: Jamie McCarthy/Getty Images for Versace for H&M 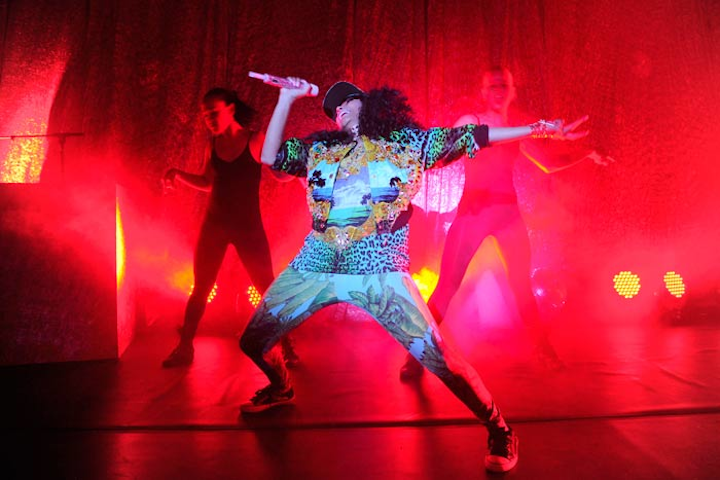 Nicki Minaj, who changed into head-to-toe Versace for H&M for her performance, entertained the audience of 700 guests with about half a dozen of her greatest hits, including "Fly" and "Super Bass." Her performance occupied just a fraction of the stage, the majority of which remained hidden behind a gold curtain.
Photo: Nicholas Hunt/PatrickMcMullan.com 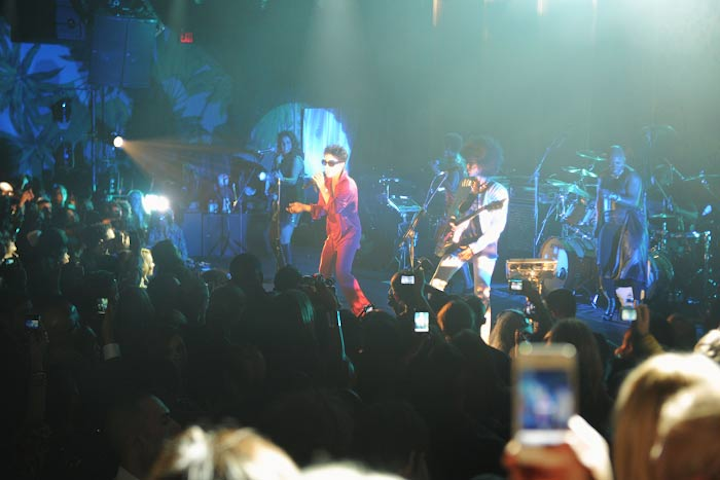 Prince, a close friend of Donatella Versace, performed an hour-long concert for the crowd. The stage's gold curtain came down to reveal his band and backup singers. H&M officials waited until the end of his performance to open the pop-up shop to guests.
Photo: Billy Farrell/BFAnyc.com 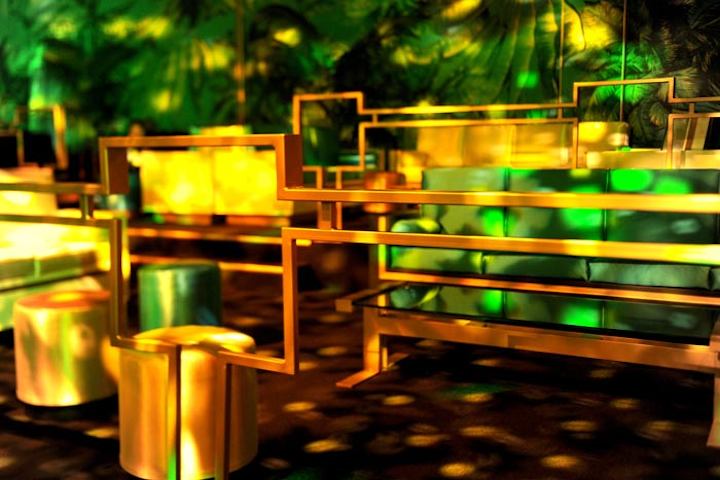 The banquet seating during the concert featured low cushions and ottomans that guests could easily move around for a better angle to watch the performances. Situated on a raised platform, the seating area was lined with banisters depicting an abstract Greek motif pattern, echoing the fashion show setup.
Photo: Billy Farrell/BFAnyc.com 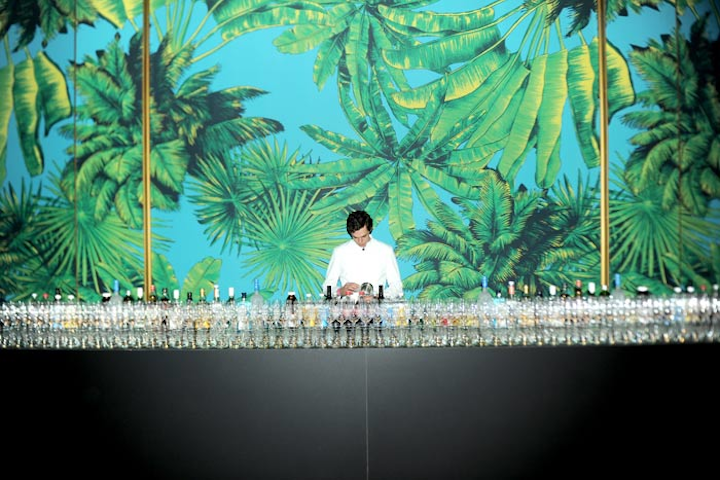 At the concert, two long bars were erected at opposite sides of the space, boasting 18-foot-high walls and the palm-print motif as a backdrop.
Photo: Billy Farrell/BFAnyc.com 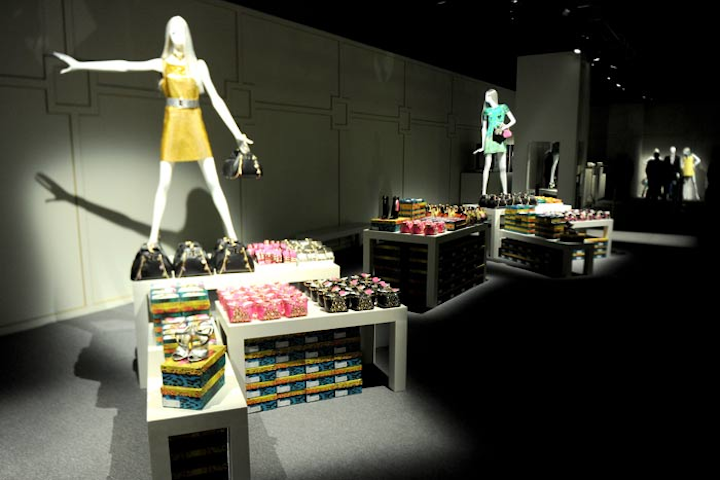 Directly off stage right, the 4,000-square-foot Versace for H&M pop-up shop, which opened just after midnight, was set up as one long hallway, with the women's collection to the right and men's to the left. Fitting rooms were built on the right-hand side in the center of the space, while two rows of registers flanked each end. Much of the collection was purchased almost immediately by attendees, with the shop closing at 3 a.m.
Photo: Billy Farrell/BFAnyc.com 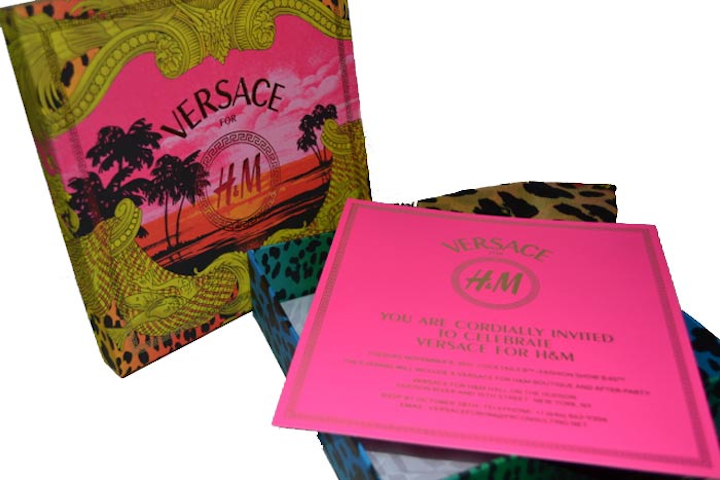 Providing a sneak peek into the festivities planned, the invitation for the event was a colorful box wrapped in Versace prints, which housed a hot pink invitation and a silk scarf from the collection wrapped in tissue paper. The box was sent in a simple black box rimmed with the Versace-style Greek motif.
Photo: Jim Shi
More in Event Production & Fabrication