Setting up a small stage? Keep these tips in mind—and check out how five events created eye-popping small stage designs.

Not every event warrants a big-budget, stadium-worthy setup. Keep these tips in mind to create a small stage with considerable impact.

2. If you can’t go up, go wide. Hotel conference rooms often have low ceilings. “Make an impact by extending the set out to the sides,” Kirby says. “Or, bring in additional [decor] elements throughout the room to make the stage feel bigger than it is.”

3. Be conscious of space. Matt Stoelt of Stoelt Productions notes that even small stages can have a large footprint, due to backline support equipment. “Be sure to place the stage in a corner or against a wall if possible to reduce the amount of space [the entire setup] will take up,” he says.

4. Skip heavy lighting fixtures. “Using lightweight LED fixtures will help to create a large impact in a small space,” Stoelt says. “These fixtures are great for creating abstract looks and generally weigh a lot less than traditional luminaries, allowing them to be rigged to points in the venue rather than ­using an overhead truss.”

5. Raise the stage. To leave room for subwoofer cabinets, Stoelt advises raising small stages to at least 24 inches. Another audio tip: “Using smaller line array systems can typically save space by putting them directly on the downstage edge and off the floor,” he says.

6. Look for preexisting backdrops. Whenever possible, place a small stage in front of preexisting video walls or other visually rich elements within an event space. This can “save on costs while raising production value overall,” Stoelt says.

7. Cover it up. “Always cover the stage to match the venue design or theme of the event,” Stoelt says. “Rental decks are used often, so [they] are typically in poor condition. Low-pile carpet will give a fresh new look to any small stage, and Duvateen fabric can be stapled directly onto the decks.” 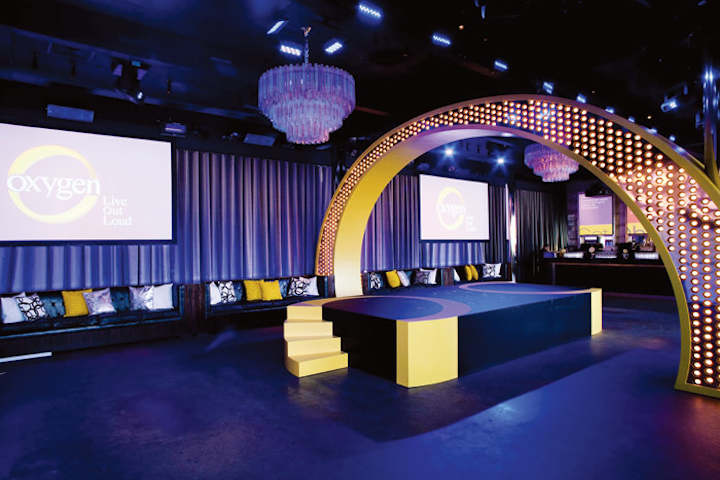 Shiraz Events helped produce Oxygen’s upfront event in New York last year. At the colorful bash, held inside the Penthouse at Dream, the centerpiece was a presentation platform topped with a 25-foot-wide, 14-foot-tall yellow arch embedded with marquee lights. The piece was modular, allowing the team to construct it and break it down in under an hour.
Photo: Jaka Vinsek 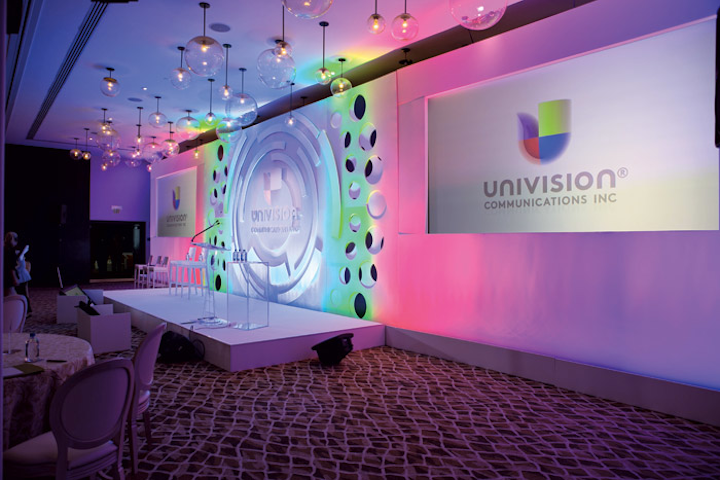 Univision hosted its annual Hispanic 411 forum, an event that educates brand marketers and agencies on Hispanic trends and culture, at the Epic Hotel in Miami in February. Produced by Production Resources Group and designed by Shiraz Events, the stage had to conform to the ballroom’s low ceiling height and sphere-shaped chandeliers, which were ultimately incorporated into the set.
Photo: Courtesy of Univision 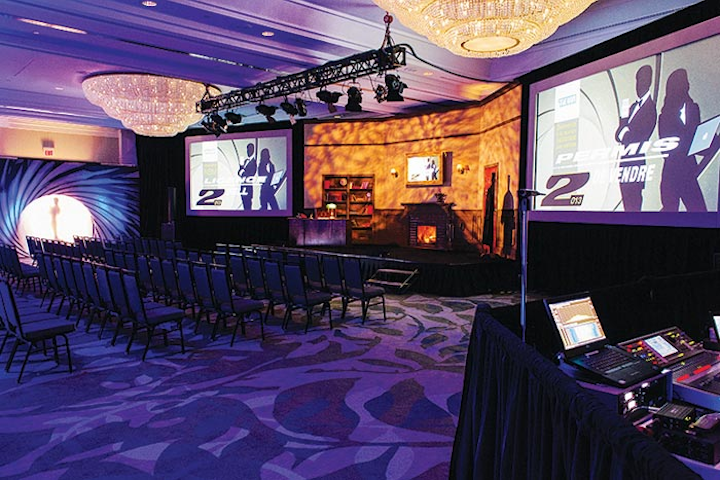 In February, Teva Pharmaceutical hosted a three-day conference at the Fairmont Waterfront hotel in Vancouver. Playing off the event’s 007 theme, AVW-Telav designed the opening session stage to look like the office of MI6 head “M,” with a faux fireplace, working light fixtures, and a red leather door. The presentation began with a James Bond-inspired video montage starring the company’s vice president, who eventually appeared on stage via a hidden opening in the set’s bookcase.
Photo: Darryl Matthews 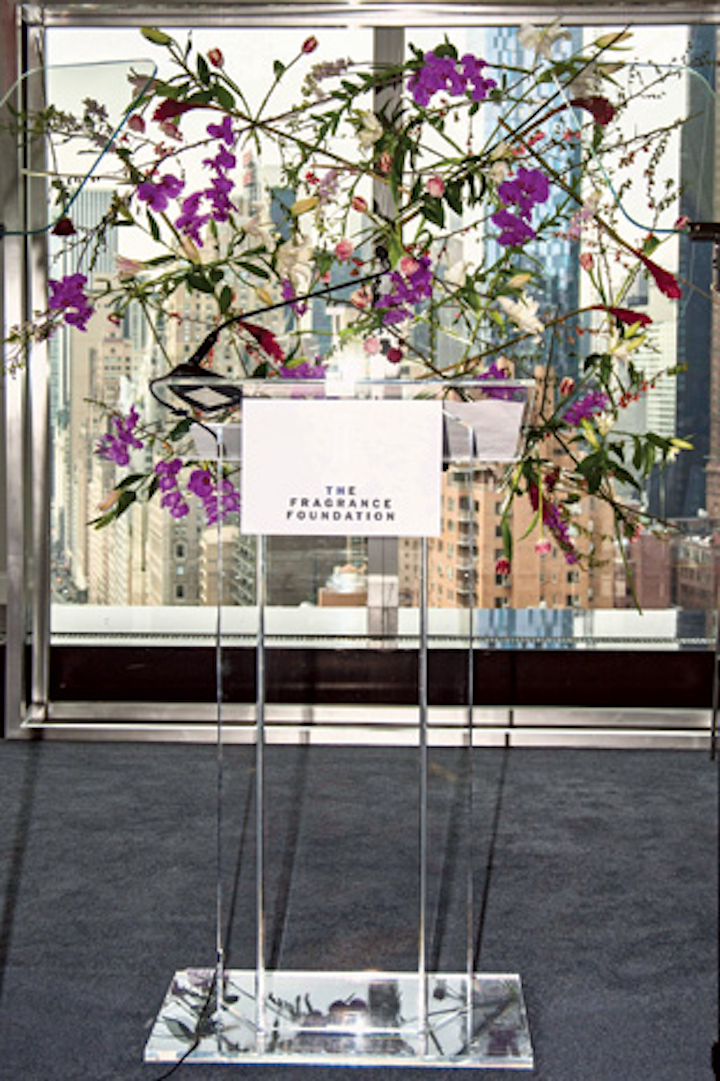 In April, a Fragrance Foundation award breakfast took place at New York’s Mandarin Oriental Hotel. For the 20- by 12-foot stage, designers from Empire Entertainment created a floral backdrop that mimicked the blooms sprouting in Central Park, which the venue overlooks.
Photo: Jonathon Ziegler/patrickmcmullan.com 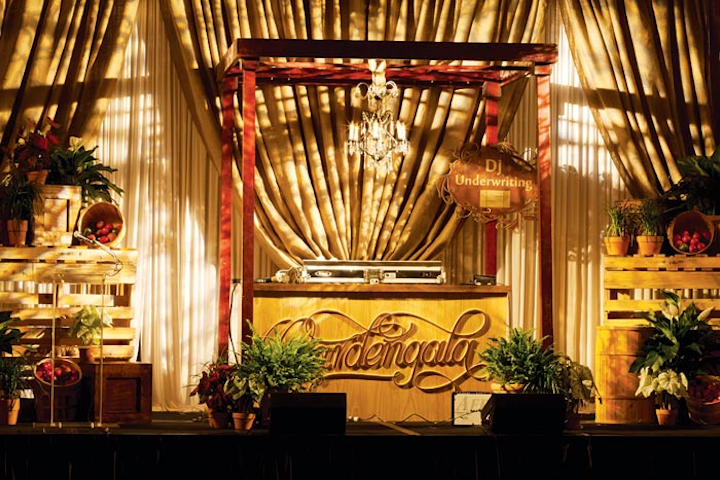 Diffa’s Believe gala in Chicago last year had a garden-inspired setting. A small stage was used only for the DJ and announcements, but producers from Event Creative added a pergola to give the raised platform more presence and to incorporate it into the event’s overall look and vibe.
Photo: Nicholas Foli
More in Event Production & Fabrication