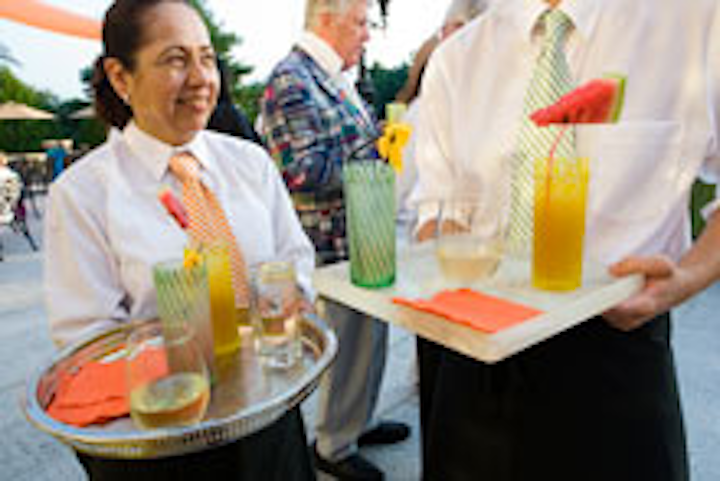 Agencies say staffers available for events are more qualified than ever.
Photo: Jonah Koch for BizBash

Despite some hopeful signs that the recession might be bottoming out, gruesome unemployment figures continue to plague the American economy. And if there’s a silver lining for the event industry in that unfortunate circumstance, it may be visible in the ranks of staffing agencies, which report a significant increase in qualified applicants as other jobs vanish, yielding a deeper, broader talent pool available for event bookings.

The Party Staff general manager and director of operations David Goldman cited an increase in job seekers of perhaps as much as 70 percent over last year at this time. “It's more of an employer's market now, and so a higher caliber of applicants is emerging. We're in new territory—even today in interviews, we could see a very noticeable difference in the caliber of applicants, and it's definitely a byproduct of what's going on.”

RoK Events owner Ryan Kirk (who shuttered staffing firm GrooveCrewLA last year) has seen “a huge increase in the amount of resumes and referrals,” he said.

Black Tie Event Services C.E.O. and founder Stephen Plache reported a 150 percent increase in applicants over the last six months. “With unemployment rates at current levels, many professionals from hard-hit sectors such as retail, real estate, and technology are now open to seeking employment in the hospitality industry. And with the hotel and restaurant industries suffering, we have benefited from the availability of these applicants as well,” Plache said. “This is the first time we have seen such a surge in applicants in the 20 years we have been in business.”

What the surge means for events overall is perhaps the highest level of service ever available.

“An increased number of qualified applicants has allowed us to be even more selective than ever before when hiring. We are raising the bar. Where before we may have considered hiring someone with a small amount of food and beverage experience, we now are requiring at least a full year of fine dining, catering, or banquet experience,” Plache said. “The benefit to our clients is simply more qualified and professional staff.”

Ana Gallegos of Beautiful Bartenders, who noted a drop in business because her roster of staffers—chosen on the basis of their looks as well as talent—may be considered an unnecessary luxury item in tough times, is offering incentives to drum up work. “We're sending out a postcard for ‘retro rates,’ [not offered since] 2001. The result of the recession is that we've lowered our rates to catering companies and pre-existing clients.”

Notwithstanding model staffing fees, what hasn’t changed significantly overall is the cost of general event staffing services. “We have not seen significant downward pressure in the costs of doing business, including hourly pay rates, insurance costs, and payroll taxes. Therefore our rates have remained stable. Many people are eager to work, however, we have not seen them eager to work for less than prevailing market wages,” said Plache. RoK's Kirk reports his fees are “exactly the same” today as in the pre-recession days.

Goldman says the Party Staff has also kept its costs the same, but warns that one side effect of the recession on staffing companies may not be immediately visible to event organizers: Some agencies are reverting to sending out employees as 1099 independent contractors so the agencies can save on payroll taxes and reduce operating costs. “That might allow them to be more competitive with clients, but the downside is that if you hire a 1099 employee, you could be seriously liable in the event of accident or injury. That is disturbing,” said Goldman, whose staffers are all on the company's payroll. “I have on my books right now [about] eight workers comp claims [for basic on-the-job injuries]. My clients don't know about them, and they don't need to know. We have to think about this, but it doesn’t mean that our clients do—that’s the service we [continue to] provide.”