No, It Wasn't an Alien Invasion: Inside Red Bull's Latest Viral Stunt

A collaboration with the InterContinental Los Angeles Downtown, the energy drink brand's high-flying stunt took a year of planning—and caused quite a stir on social media. 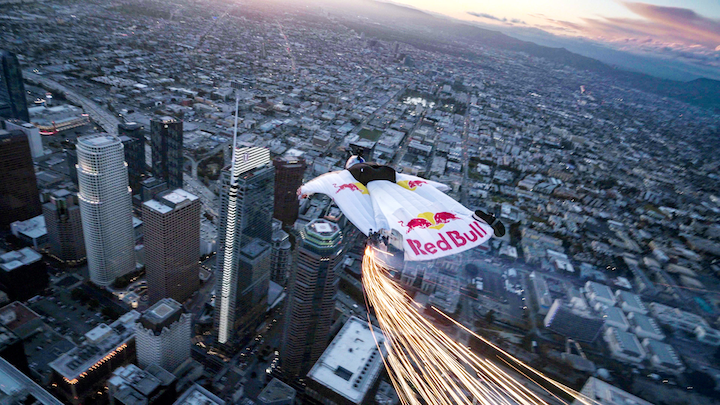 LOS ANGELES—On March 20, Los Angeles residents quickly took to social media after seeing a bright flame descending on the downtown skyline. Naturally, jokes about aliens and LeBron James quickly followed, while the police department assured residents that the ball of light was not, in fact, a meteor. "This is Tinseltown after all," quipped the LAPD's official Twitter account.

The truth was revealed the following morning: The "meteor" was actually a stunt from energy drink company Red Bull—and the social media chatter was exactly what the brand had wanted.

Designed to celebrate the last supermoon of the decade and to ring in the vernal equinox, Red Bull teamed up with the InterContinental Los Angeles Downtown on the first wingsuit jump into DTLA. Members of the Red Bull Air Force (the brand's team of aerial stuntmen) jumped from a helicopter 4,000 feet above the city while wearing branded, flying squirrel-inspired suits, soaring past the hotel before landing in the street. The suits were fitted with LED lights and pyrotechnics, creating a dramatic effect against the night sky.

The partnership with the InterContinental Los Angeles Downtown, which opened in 2017, was a natural fit because the 73-story, 1,100-foot hotel is the tallest building on the West Coast.

"When the opportunity to collaborate with Red Bull came across my desk, it was a no brainer," said Amy Funke, the hotel's director of marketing and communications. "It was such a natural fit for the InterContinental brand and our hotel specifically, which is changing the way people travel to L.A. The idea of showcasing InterContinental Los Angeles Downtown on a global scale, with another amazing brand, was exciting." 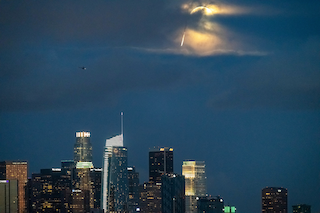 The stunt was planned to coincide with the last supermoon of the decade.Photo: Michael Clark/Red Bull Content Pool

The hotel started working with Mark Nechi, the Red Bull Air Force's manager, a full year ago. "With an activation of this magnitude, the ‘marketing plan’ couldn’t start until the logistics were ironed out," explained Funke. "We had to complete multiple walkthroughs, permits, approvals, security plans, legal, and much more, while aligning the athlete schedules with the last supermoon of the decade."

While some social media users decried the surprise and uncertainty surrounding the stunt, city officials and nearby businesses were in fact warned what was going on. "The stunt required F.A.A. permits as well as film permits," said Funke. "Since there were street closures involved, we communicated these to our hotel guests, neighbors, and L.A.P.D., who was also onsite."

As expected, the stunt certainly got people talking about Red Bull—and the hotel. "We had high hopes for social impact, but it definitely over-delivered," noted Funke. "The reaction was instant, from the guests atop [our rooftop bar] Spire 73 who knew what we had planned, to Angelinos on the ground—keeping up with the various story lines and footage was nearly impossible and snowballed overnight. The speculation went from L.A. to abroad, and seeing our building identified organically reinforced that it’s the new icon in the skyline."