Coachella 2015 Preview: Will This Year Mark a New Party Trend?

Although some massive events remain on the desert roster, many brands are making the move to more targeted, intimate fetes at the California music festival to attract a better-curated mix of influencers. 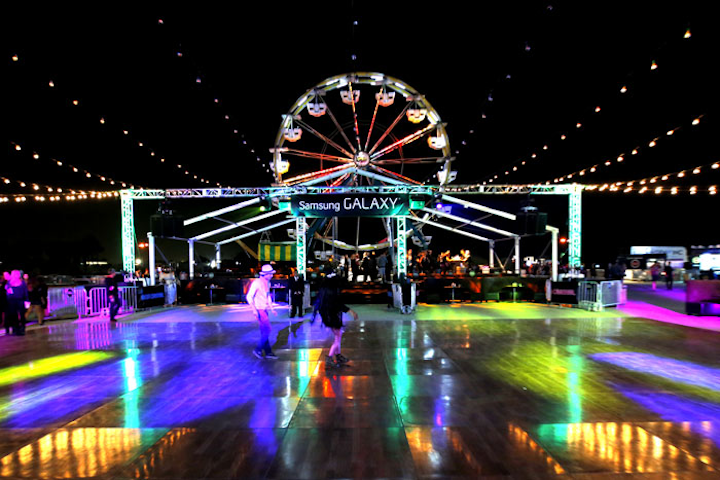 Ever since Goldenvoice took its Coachella Valley Music and Arts festival to a two-weekend format in 2012, brands have consistently flocked to the buzzier first weekend to host their unofficial events, pool parties, hotel takeovers, and suites. In fact, so many brands hopped on board the marketing bandwagon for the year's biggest music festival that parties only got bigger, and—perhaps inevitably—some became less exclusive.

But it looks like this year's Coachella weekend one, slated for April 10 to 12 at the Empire Polo Fields in Indio, California, will see a new set of unofficially affiliated parties that largely mark a move toward the more intimate and targeted.

Vanishing hosts
Gone this year is the massive desert pool party from Lacoste. Guess, similarly, will cede its takeover of Palm Springs' Viceroy hotel to festival newcomer PopSugar, which will host its Cabana Club weekend-long celebration with ShopStyle.

Alessandra Ambrosio will host the opening night for PopSugar in celebration of her collection with Bauble Bar. The Council of Fashion Designers of America will also appear—for its first time in the desert—with a brunch at the PopSugar Viceroy space on Saturday with Hannah Bronfman as DJ. BizBash reports exclusively that additional entertainers for the celebration will include the Misshapes, Harley Viera-Newton, and Zoë Kravitz’s Lolawolf. Chet Mehta's PR-Dept. is handling PR.

Big blowouts
Of course, some weekend parties will command the huge crowds festivalgoers have come to expect. Brent Bolthouse's Neon Carnival, most notably, will be back for its sixth year on the scene, but with a new lineup of sponsors including presenting sponsor Paper magazine, Pacific Sun, Dope the movie, and tequila Don Julio. EFG: Entertainment Fusion Group is doing PR.

The H.Wood Group's Boosty Bellows, along with sponsors McDonald's and Chevrolet, will also set up its massive party at a Rancho Mirage estate, with a performance by 2Chainz and a DJ set from Brody Jenner. (So that collection of huge-scale sponsors and entertainers is a window into the party's more mass-market approach.) The Narrative Group is handling media—even sending out wristbands in advance to minimize chaos—and producing the party with support from ESE Lifestyle. EMC Bowery handles PR for H.wood and Boosty.

NVE: The Experience Agency produced that event in 2014, but this year the company is instead producing two more intimate events for Nylon: Friday night will see a Bermuda Dunes estate pool area transformed into what NVE's Brett Hyman described as "a secret garden." And then guests will all head into an airplane hangar for an all-night party. (Details used to occupy that calendar slot with its former Details at Midnight event.) On Sunday, Nylon will host a recovery-style party with a yoga class, juices, and meditation. EFG is also handling Nylon's PR.

Intimate retreats
Soho House will again host an elite weekend-long program of events in the desert.

Among the lower-profile retreats is one at the 20-room Sparrows Lodge, where guest can expect a luxe, insider vibe with healthy fare, cocktails from Absolut Elyx, gitfing suites, and spa and beauty treatments. Isaac Ferry and Steph Scire are behind the program. "It's where you want to go to just relax, unwind," said Mehta, who is also working on the Sparrows event. "It's supposed to feel like an escape, almost like a backyard pool party with intimate friends, versus a massive marketed huge event."

M.A.C. Cosmetics and Mia Moretti will host a daytime poolside event at the Ingleside Inn in Palm Springs on Friday, taking cues from their collaboration collection inspired by the upcoming summer festival season. Roving artists will do makeup touch-ups on site.

Also on Friday—suggesting that Friday is gaining popularity for event marketers—official festival sponsor H&M will host a so-called "sunset cocktails" party at the Parker Palm Springs. Just 75 guests are expected to attend. The number is a contrast to the massive fete it held at the 40-acre Merv Griffin estate its first year with a party off the polo fields, where Mehta estimates about 500 to 700 guests reveled.

Another newcomer, Rachel Zoe and The Zoe Report, will host a pool party with Dolce Vita on Saturday in Palm Springs.

Pandora will bring Questlove for its Cathedral City party, which will include a giant teeter-totter and snow cones.

Newcomer Refinery29 will host a party at the Saguaro that will include festival hair braiding from Garnier. ID PR (free from its former Lacoste duties) is handling PR and guest list management.

The weekend-long pool party known as the Influential House will draw about 100 targeted social media influencers and brands meant to engage them. Bagavagabonds will produce. Last year, the party garnered one billion gross social media impressions for the hashtag #TINhouse, and had three No. 1 worldwide trends on Twitter.

Starting early
In another twist, a couple gift suites—from Debbie Durkin and Kari Feinstein—billed as pre-Coachella events will actually take place in Los Angeles prior to festival kickoff. Pop-up producer Pop Your Shop will host a pre-Coachella shopping event at Rosenthal Winery in Malibu on April 4.