Cedars-Sinai Gala Thanks Donors With Dinner Before Speeches

"If you love something, set it free," so the saying goes. And working under that philosophy, Cedars-Sinai honored the donors of its overwhelmingly successful Discovering for Life fund-raising campaign with an event that thanked and celebrated the guests without holding them hostage for an evening of dull speeches. Arthur Ochoa is Cedars-Sinai's senior vice president of community relations and development, and oversaw the campaign with associate director of campaign management Melissa Coleman. Senior team leader and producer Stacy Seligman Kravitz oversaw the event's production.

More than 250 guests, who each in some way contributed to the campaign that stretched five years and beat its goal of $350 million by a full $7 million, came for the event atop the London at 6:30 p.m., where a buffet-style dinner from Along Came Mary was served immediately around the hotel's pool, forgoing a traditional predinner cocktail hour. "You arrive and immediately feast and imbibe and enjoy the environment for the first hour. We're automatically engaging our guests," said Coleman.

From that open-air space, guests were able to look south across the evening sky to the medical center, where a bright beam of light emanated straight into the sky. "Our original venue was going to be on campus," said Coleman. "When we decided to move off campus instead, we still wanted to create an emotional connection to the medical center. [To help achieve that] we had a high-intensity stationary beam of light shining from our parking lot into the sky above as a beacon." A 60- by 40-inch campus map also called out key transformations, and a telescope in the party space was fixed on the medical center.

Following dinner and cocktails by the pool, guests moved into the London's new perma-tent (it was the first event to use the clear-walled structure) for brief speeches, a video, and a spirited performance of covers by Rickey Minor and the Tonight Show Band. "The program was all oriented to making people as comfortable as possible," said Ochoa. "They could eat, they could hear the band, and then they could go home. One of the things that we've noticed in this postmodern world is that people don't want to get dressed up for events, nor do they want to stay for a long period of time. We're giving people the opportunity to celebrate within the community but not suffer for having done so." To that end, guests were able to hand their valet tickets to a call-ahead station at the top of the elevator, so that by the time they descended from the roof and made their way out front, their cars were almost pulling up.

"We tried to have this event be about the amazing community that made it all possible," said Kravitz. "And we also wanted to show them what their resources are helping to create." 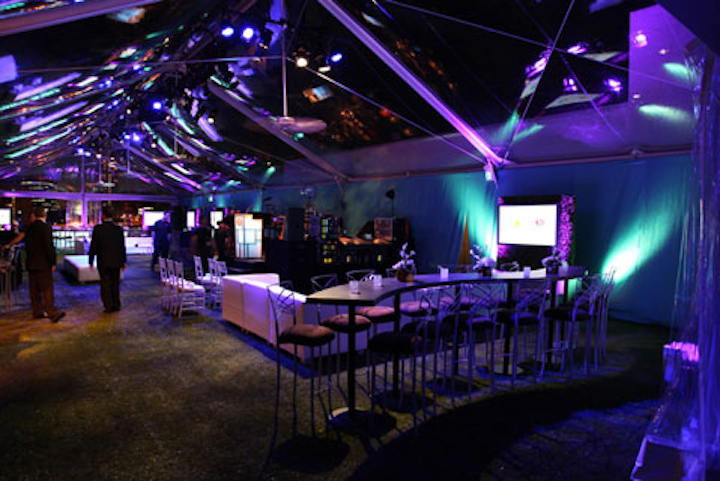 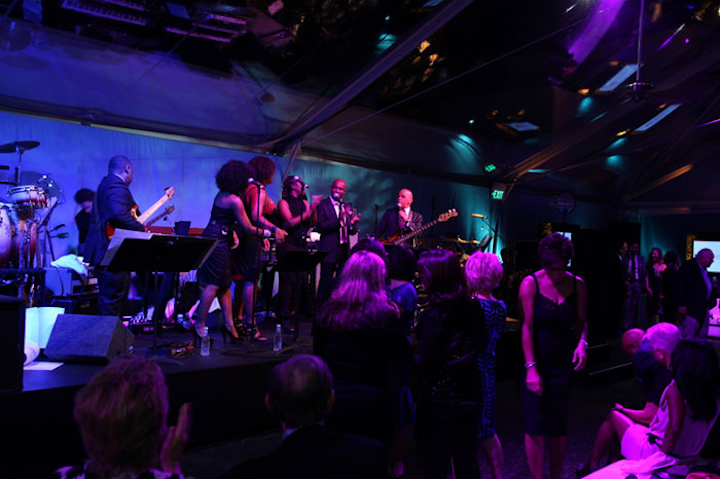 Cedars-Sinai Medical Center honored more than 250 guests at its closing gala for the Discovering for Life campaign, where Rickey Minor and the Tonight Show Band performed.
Photo: Alex J. Berliner/ABImages 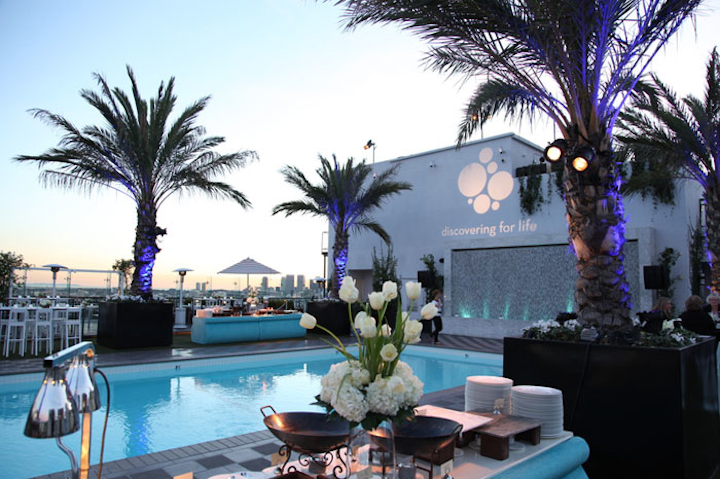 A gobo on the London's facade bore the name of the campaign.
Photo: Alex J. Berliner/ABImages 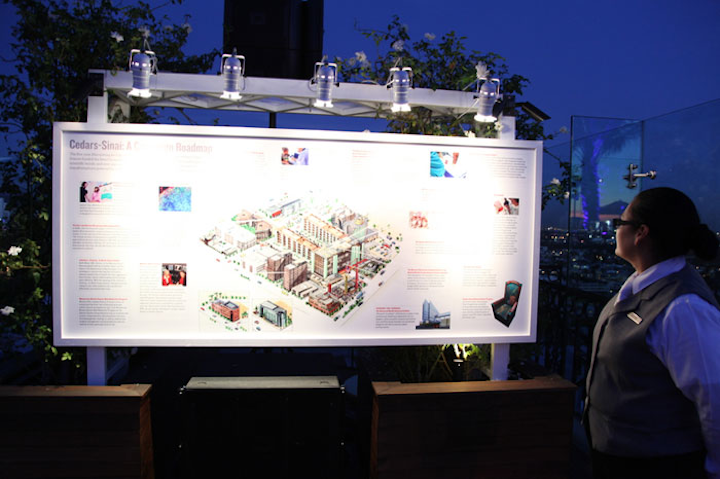 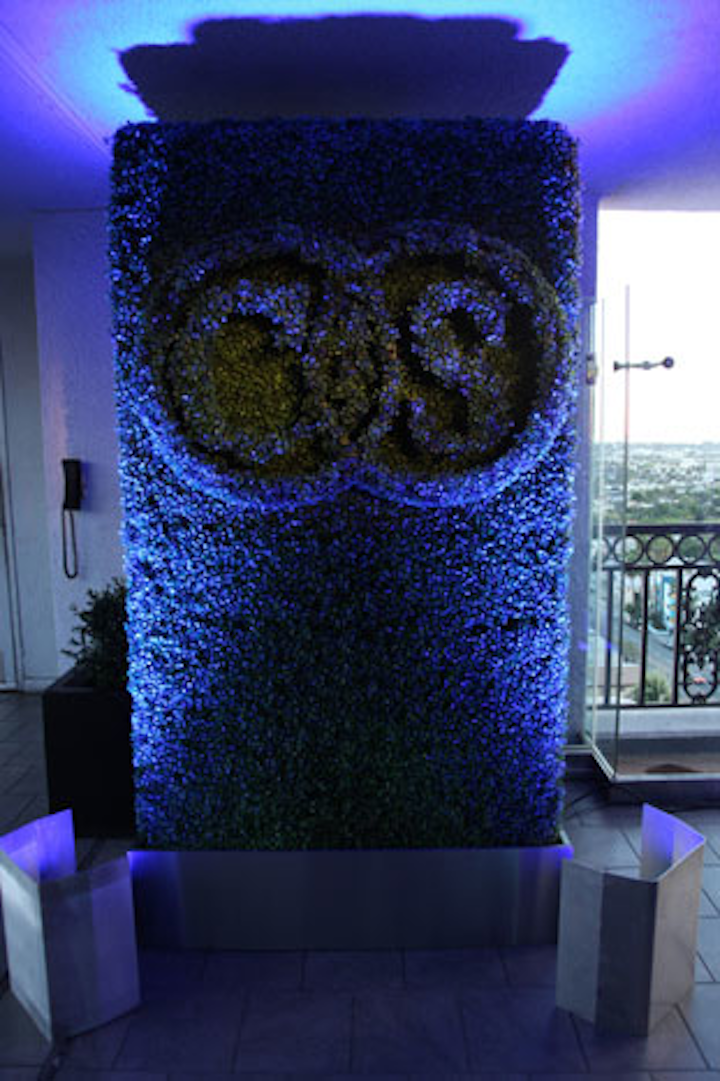 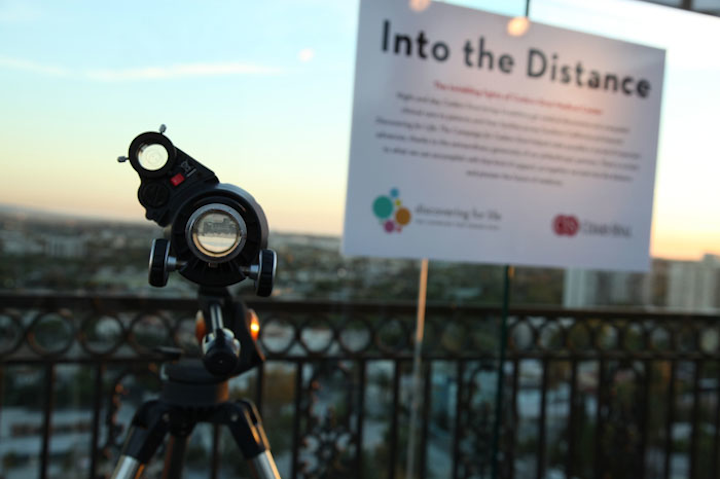 A telescope in the party space was fixed on the medical center.
Photo: Alex J. Berliner/ABImages 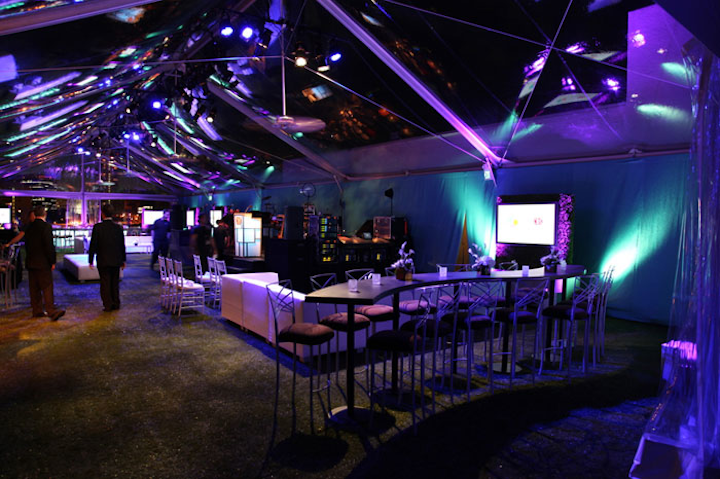 The event was the first held under the London's new perma-tent structure.
Photo: Alex J. Berliner/ABImages
More in Programming & Entertainment