Carla Warrilow
On Sunday, the N.F.L. threw its first fan-focused Super Bowl party in Canada, hosting guests in Vancouver, Montreal, and Toronto. The decision was sparked by consumer demand. “As social media continued to grow, the N.F.L. continued to get asked to throw something like this,” said Jeff Rogers, vice president of experiential marketing at Mosaic, the company that managed the event for the football league. Sponsored by Bud Light, Toronto’s party took over Sound Academy and attracted about 1,200 guests as well as 280 V.I.P.s.
The main goal of the event was to create the feel of the game in Indianapolis to Canadian fans. “We tried to make it as authentic as possible,” Rogers said. The event brought all the elements of a football game together, from a tailgate party outside to professional N.F.L. players and cheerleaders as guests. Rogers explained that in the Canadian market, house parties were the main competition for this event. “What a house can’t bring is all of these authentic N.F.L. experiences.”

There were plenty of activities to keep guests busy. Outside, attendees showed off their skills with a football at inflatable game stations. When they weren’t watching the game on one of many flat-screen TVs, guests inside played Madden NFL 12, watched band Big Wreck perform, and posed for photos with the Bud Light girls and Buffalo Jills cheerleaders.

Social media played a role both during the event and as a lead-up. The N.F.L. geo-targeted its Canadian Facebook fans, keeping them updated about daily prize giveaways and slowly releasing details about the party. At the event, a Twitter wall showed tweets from across the country with the hashtag #CanadasXLVI.

The party began at 4 p.m. with a 6:30 p.m. kickoff. Parties in Vancouver and Montreal followed a similar model. 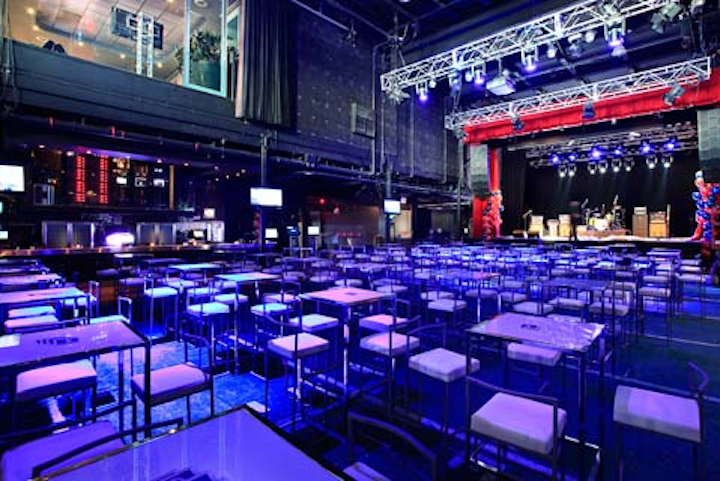 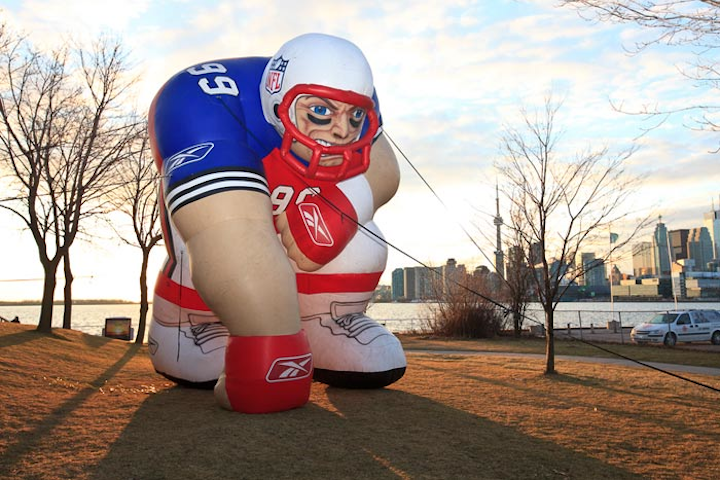 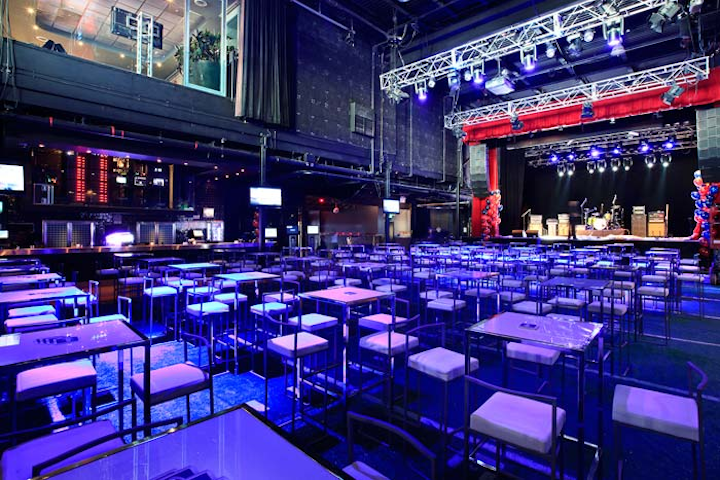 On an astroturf carpet marked with yard lines, tall stools and tables made up the main seating area. A retractable screen was lowered over the stage while the game was on. Two bars and numerous flat screen televisions bordered the space.
Photo: Dale Wilcox for BizBash 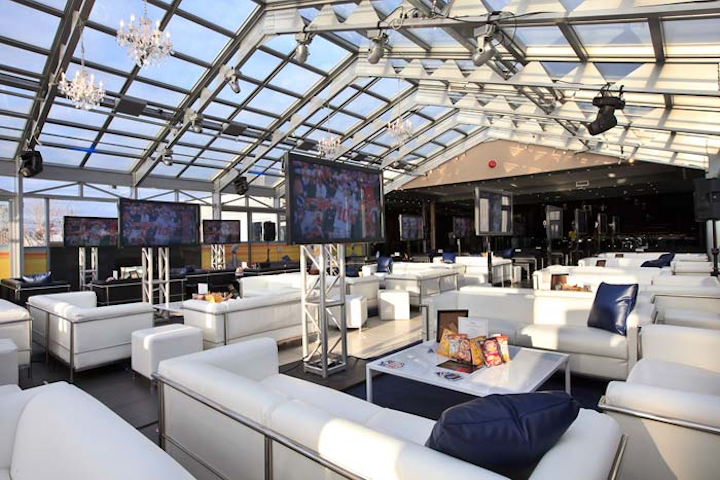 The V.I.P. area was upstairs in the solarium. Each group was assigned to a booth that came with its own television.
Photo: Dale Wilcox for BizBash 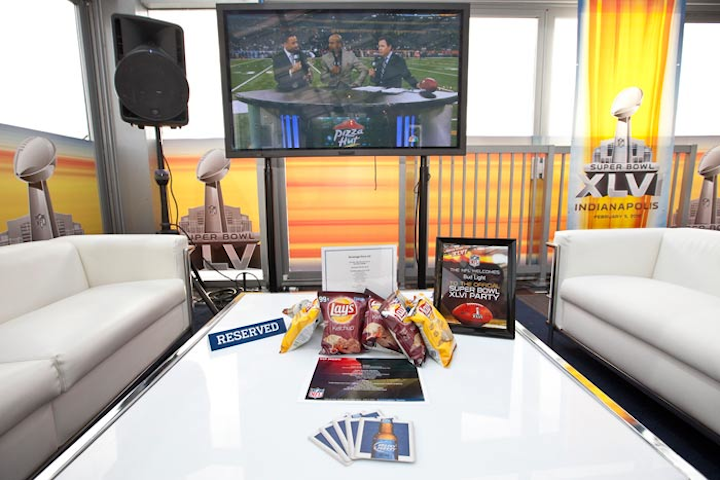 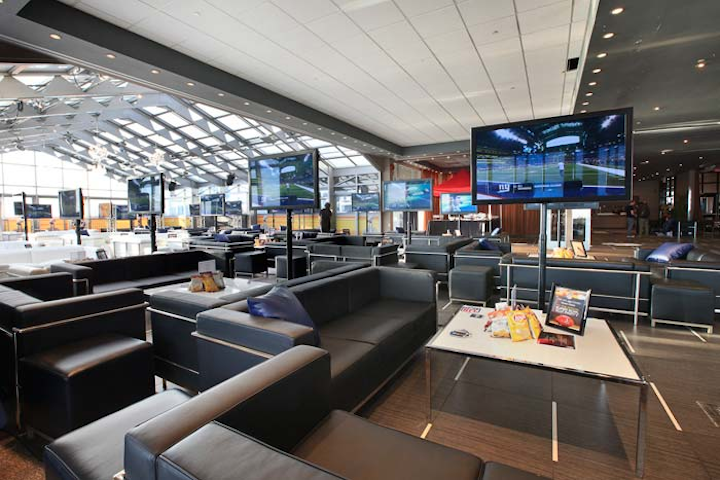 The V.I.P. area was filled with white and black sofas.
Photo: Dale Wilcox for BizBash 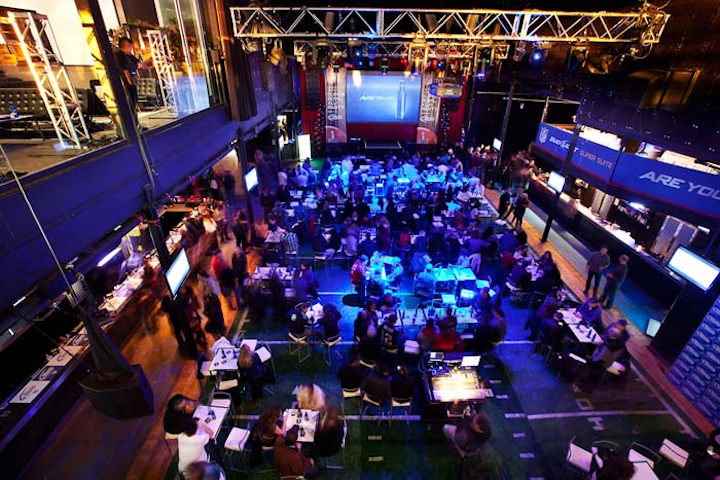 Headlining sponsor Bud Light had a clear presence in the main seating area, with branded bar tops, tabletops, and a wall of Bud Light boxes. The space was lit with blue lights, the beer brand's signature colour.
Photo: Dale Wilcox for BizBash 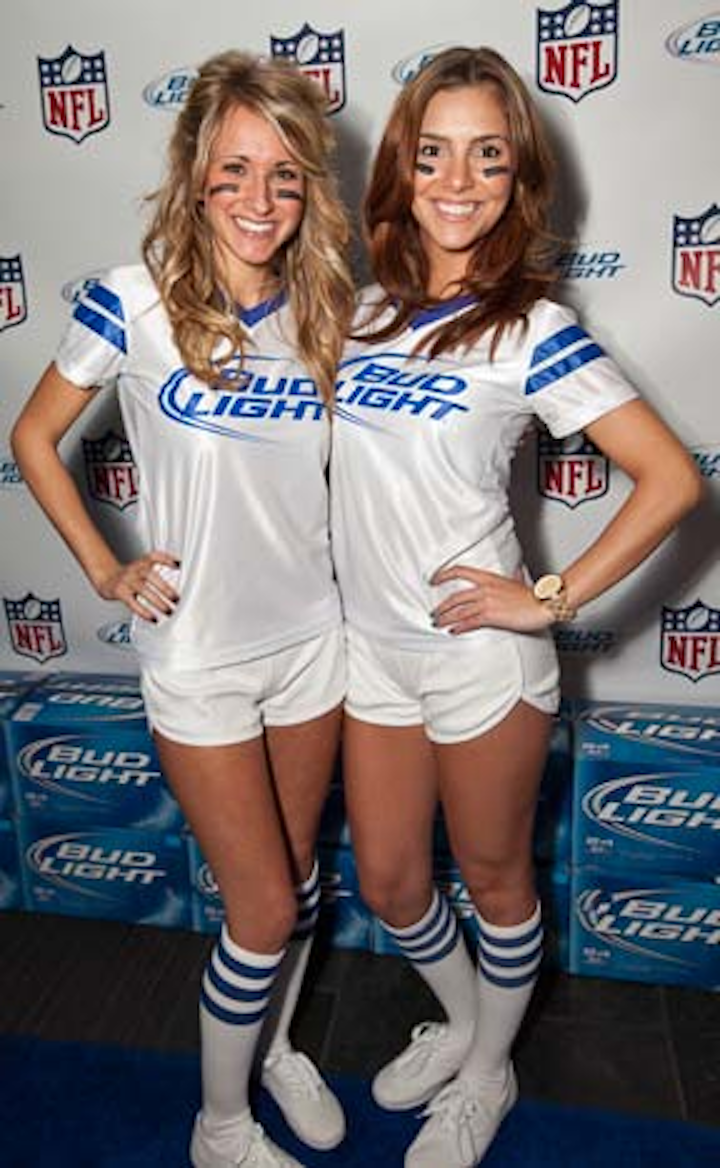 Bud Light girls circulated during the party. Guests could get their photo taken with the brand reps in front of a step and repeat.
Photo: Dale Wilcox for BizBash 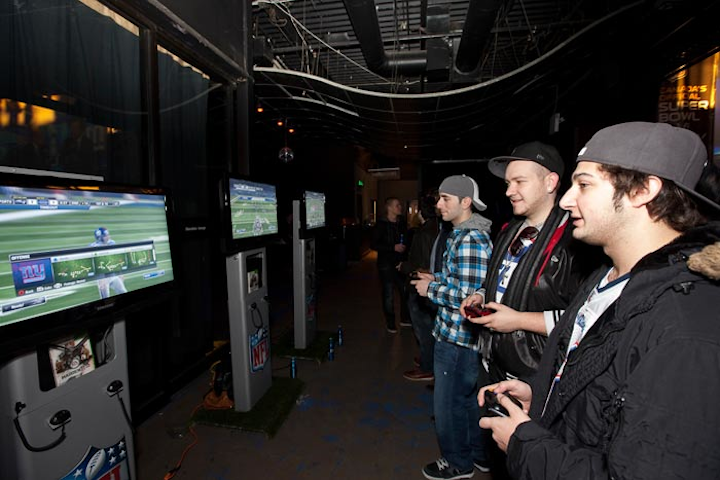 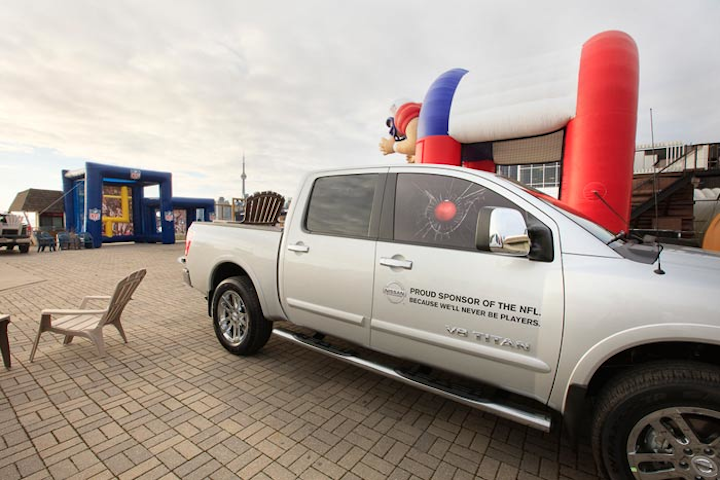 The back patio channeled a tailgate party, lined with Nissan trucks, coolers, and lawn chairs.
Photo: Dale Wilcox for BizBash 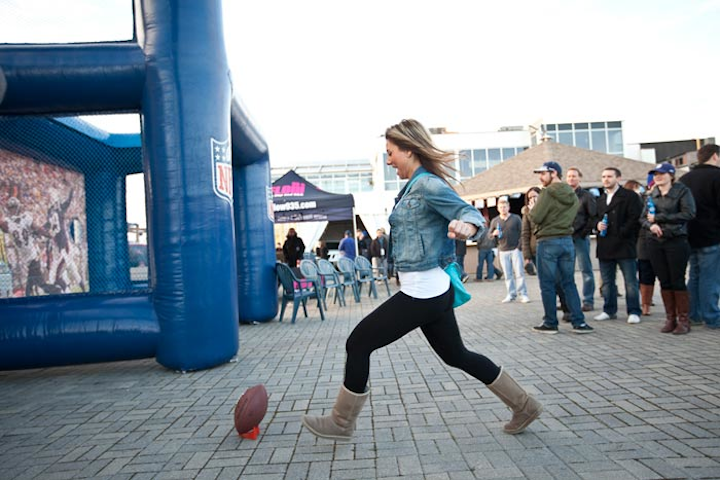 Inflatable games had guests kicking a field goal, throwing a pass, and racing outside in the tailgate area.
Photo: Dale Wilcox for BizBash 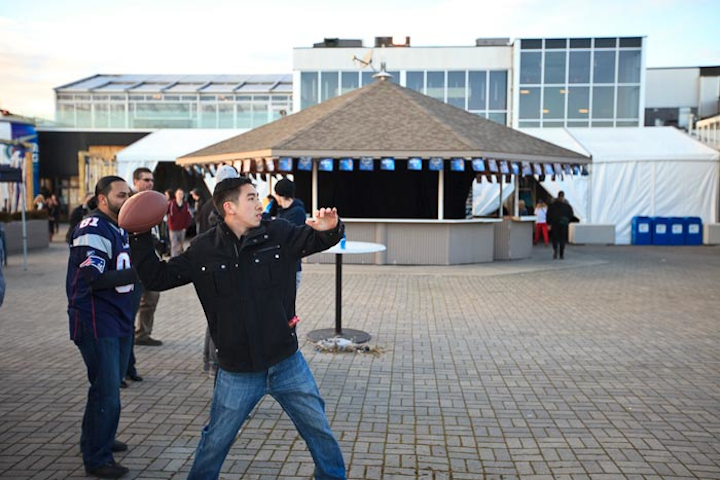 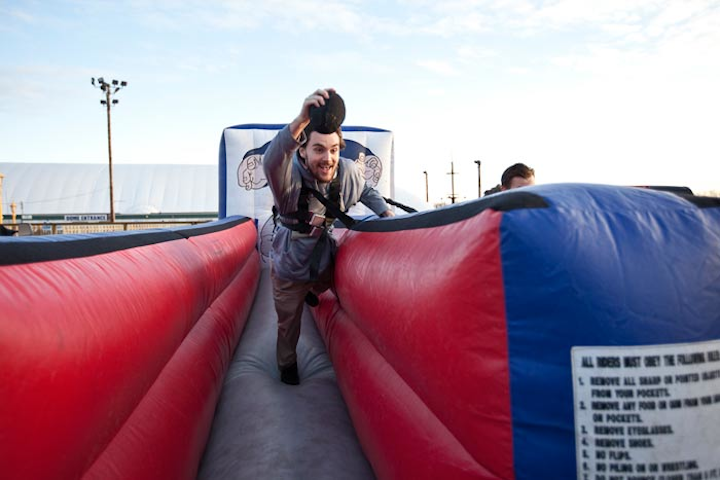 Guests raced their friends at the inflatable bungee race game, diving to attach a football to the Velcro.
Photo: Dale Wilcox for BizBash 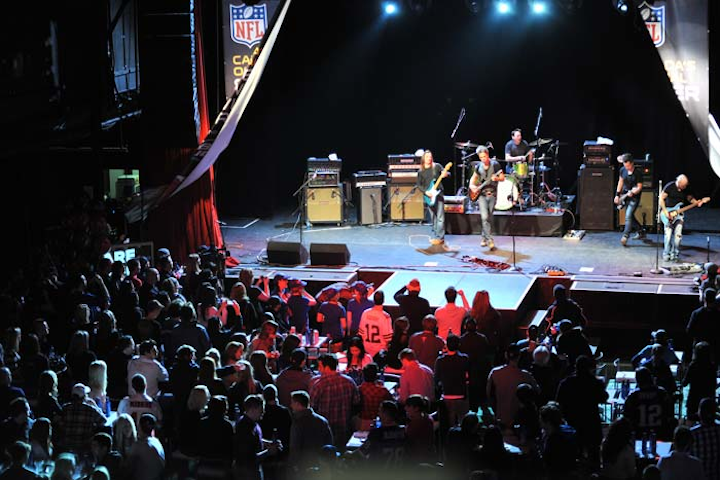 Big Wreck performed on stage before the kickoff. At 6 p.m., a screen was lowered over the stage, and the game was projected on to it.
Photo: Shan Qiao 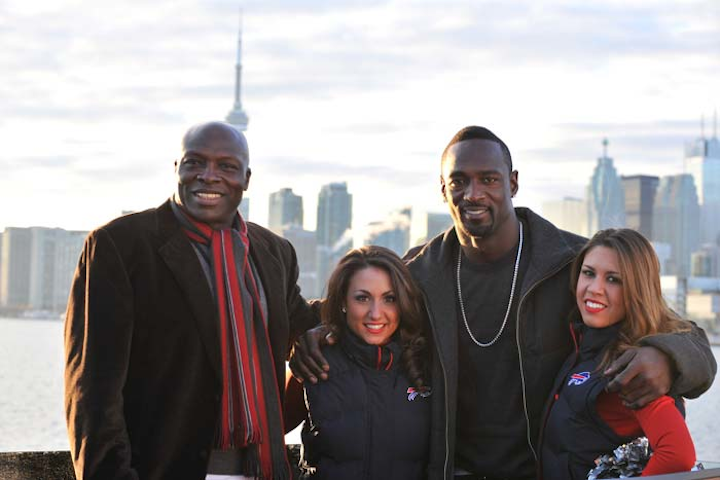 N.F.L. Hall of Famer Bruce Smith and Jevon "The Freak" Kearse attended the party in Toronto and participated in an onstage Q&A before the kickoff.
Photo: Shan Qiao
More in Strategy