'Men in Black 3' Premiere Opens Fleet Week With 2,500-Person Party on the Intrepid

The combination of sailors in their dress uniforms, actors in their finest, and plain-clothed first responders collectively bopping along to a live performance by Pitbull made for an interesting sight aboard the Intrepid Sea, Air & Space Museum on Wednesday night. The occasion was the official New York premiere party for Men in Black 3, which was screened earlier in the evening, and Sony Pictures Entertainment had invited the usual suspects—talent and studio execs—as well as firemen, police officers, emergency workers, and active military personnel. Tied to Sony's sponsorship of the Intrepid, the 2,500-person affair was specifically intended to celebrate the start of Fleet Week as well as the city itself; the third installment of the Men in Black franchise is the only one to have the majority of its production based in New York.

It was the studio's support of the museum (a former aircraft carrier) during Fleet Week that prompted the organizers to move the date of the premiere—originally set for Monday, May 21—to coincide with the festivities surrounding the arrival of the U.S. Navy, Coast Guard, and Marine Corps. As a result, Sony not only hosted a screening at the Ziegfeld for the Men in Black 3 cast, but also one for the Intrepid at the AMC Empire 25 and another for National Resources Defense Council at AMC Loews Lincoln Square. The viewing at the Empire served as a fund-raiser for the Intrepid, with 1,000 tickets offered for the institution's supporters and 250 given to the sailors, Marines, and Coast Guardsmen. Sony also worked with the mayor's Office of Film, Theatre, and Broadcasting to invite 250 first responders, targeting the downtown precincts and fire stations near the movie's filming locations.

At around 9 p.m. these disparate groups converged at Intrepid, where the flight deck was set up for the premiere party. Overseen by the Sony events team—led by Alison Bossert, senior vice president of special events—and produced by 15/40 Productions, the setting included props from the movie, white furnishings with pops of black, and a stage for the entertainment. In addition to Pitbull, the night saw a 20-minute fireworks salute to the military from Fireworks by Grucci and donated by the Generoso Pope Foundation, as well as the film's star Will Smith joining DJ Jazzy Jeff onstage for an impromptu performance.

For the food, the crew kept it simple, opting to highlight downtown neighborhoods with three menus: noodles and dumplings to represent Chinatown, pizza to embody Little Italy, and sandwiches and pickles as a nod to Lower East Side delis. The producers even constructed three detailed vignettes to house some of the buffet stations. There was a replica of the Chinese restaurant in the film, a deli named for director Barry Sonnenfeld, and a diner for ice cream and doughnuts from Baskin-Robbins and Dunkin' Donuts.

The promotional partnership with Dunkin' Donuts and Baskin-Robbins was more than just a way to bring desserts to the bash. In fact, a fairly aggressive campaign through Sony Pictures Entertainment's consumer marketing division began four weeks prior to the premiere, with the restaurants offering limited-edition fare inspired by Men in Black 3. The doughnut brand also created a free mobile app that allows users to play with an animated alien, known as Spikey Bulba.

Separately, Sony's digital department launched an effort on Instagram. On Wednesday, consumers were invited to snap shots of actors dressed as Men in Black agents, who were making appearances at various city locations. Marked with the hashtag #MICHeartsNYC, these images were aggregated on a microsite.

Also on a promotional tour was the Men in Black 3 time capsule, a marketing push that traveled from the West Coast to the East Coast collecting items from local TV press. The stunt ended in New York, with Good Morning America adding its contribution before the container was put on display in the center of the premiere party's V.I.P. lounge. The capsule will be entrusted to NASA, which may end up shooting the piece into space. 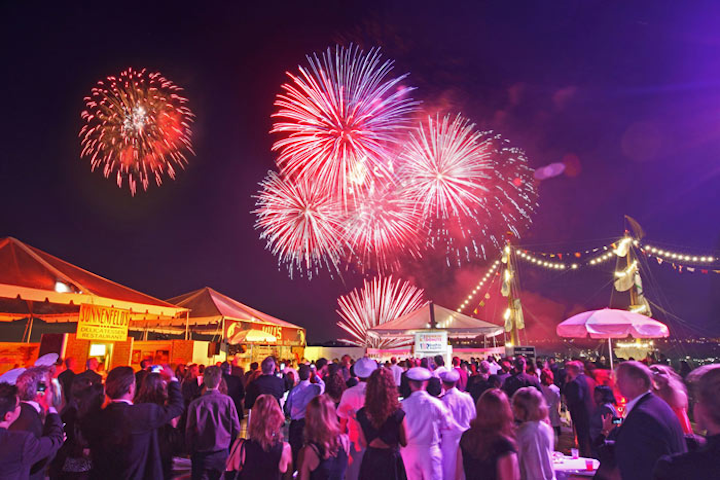 The Generoso Pope Foundation donated the fireworks display, which was executed by Fireworks by Grucci. The pyrotechnics were accompanied by patriotic music.
Photo: Line 8 Photography 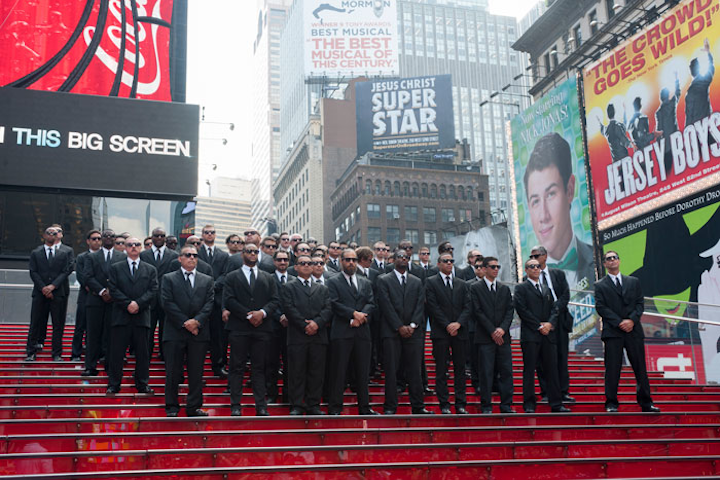 Throughout the day on Wednesday, May 23, Sony Pictures Entertainment used actors dressed as agents to build consumer buzz for the film. The public was invited to snap pics of the men and post them to Instagram with the hashtag #MIBHeartsNYC.
Photo: SPE Inc./David Giesbrecht 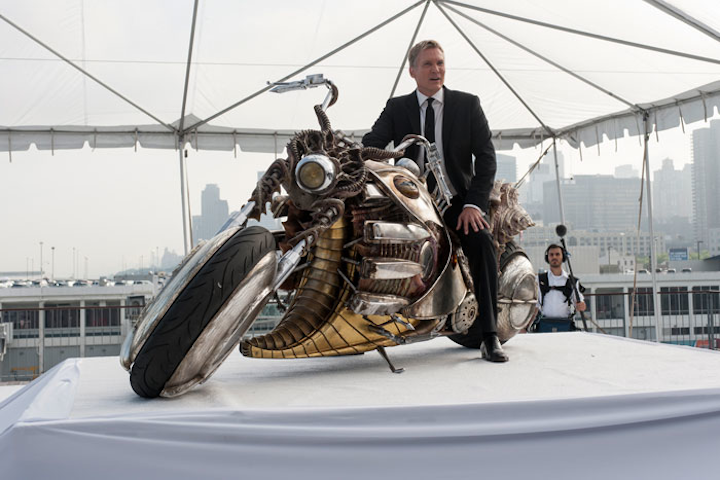 Another promotional effort was tied to the Men in Black 3 time capsule tour and saw Good Morning America filming its broadcast from the Intrepid. This included anchor Sam Champion testing out the motorcycle used in the movie by Jemaine Clement's character Boris the Animal. The prop later served as the centerpiece of the V.I.P. lounge at the premiere party.
Photo: SPE Inc./David Giesbrecht 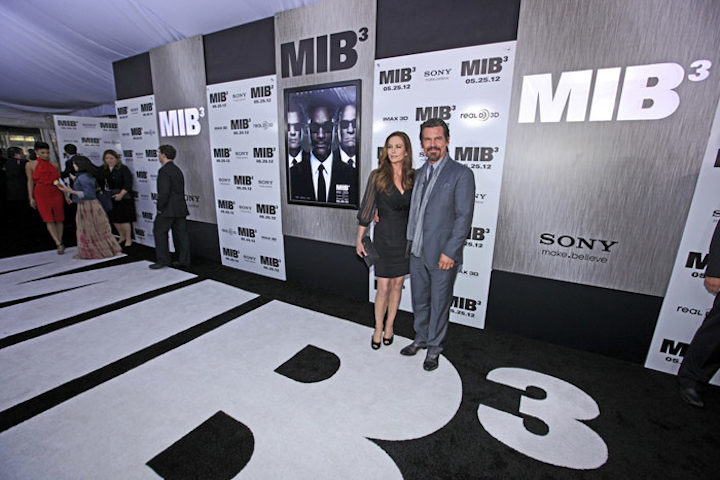 Although Wednesday night also saw screenings at the AMC Empire and the AMC Loews Lincoln Square, the Clearview's Ziegfeld Cinema served as the site of the official premiere. Sony Pictures Entertainment and 15/40 Productions created the arrivals set up, using a black carpet with the movie's logo as the most striking visual.
Photo: Line 8 Photography 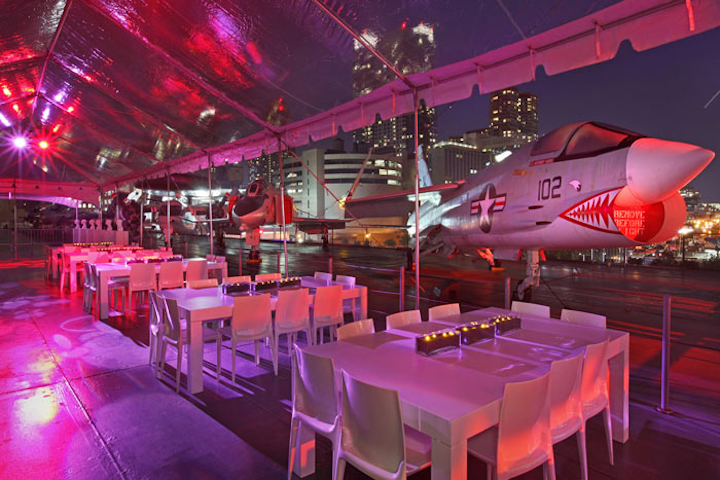 Following the three separate screenings, some 2,500 guests headed to the Intrepid, where the producers had created an environment on the museum's flight deck using mostly white furnishings and carpet. As a result of the week's erratic weather, the production team used clear tents to cover a large portion of the 900-foot-long space.
Photo: Line 8 Photography 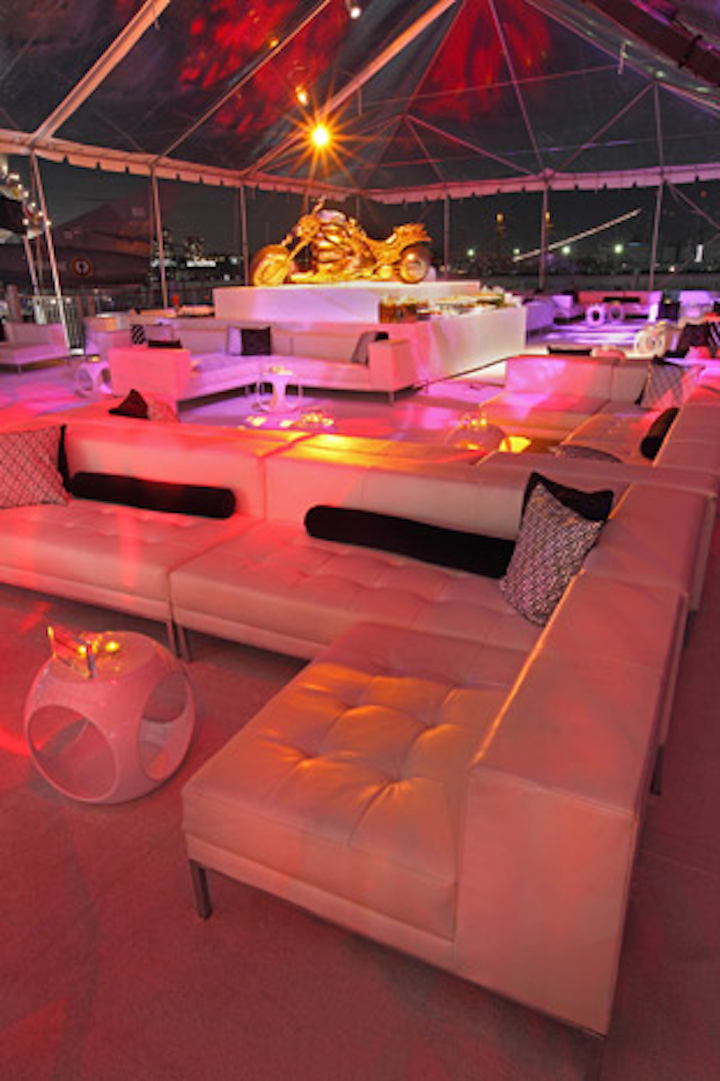 The central lounge for the cast and studio executives stood opposite the stage and was decorated with plush white sofa, black cushions, and a platform topped with the motorbike and time capsule.
Photo: Line 8 Photography 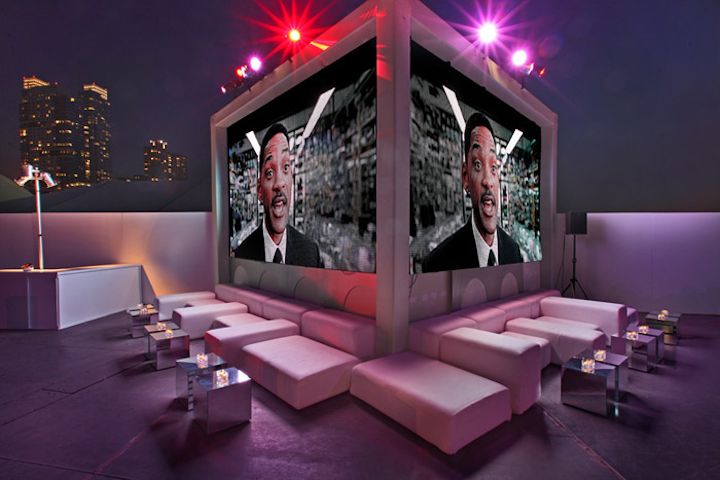 The organizers opted to set up two screens at the western end of the flight deck, allowing guests to see the performances happening on stage as well as clips from the new movie.
Photo: Line 8 Photography 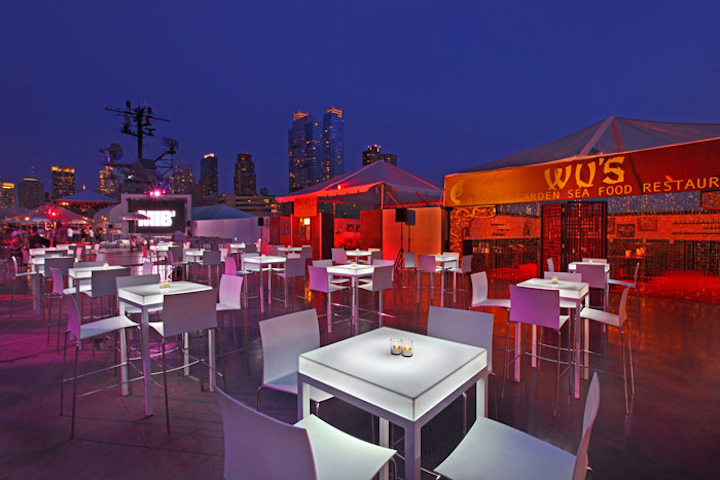 To contrast deck's gray flooring and help guests find their way in the dark, the production team used white chairs and sofas as well as illuminated tables.
Photo: Line 8 Photography 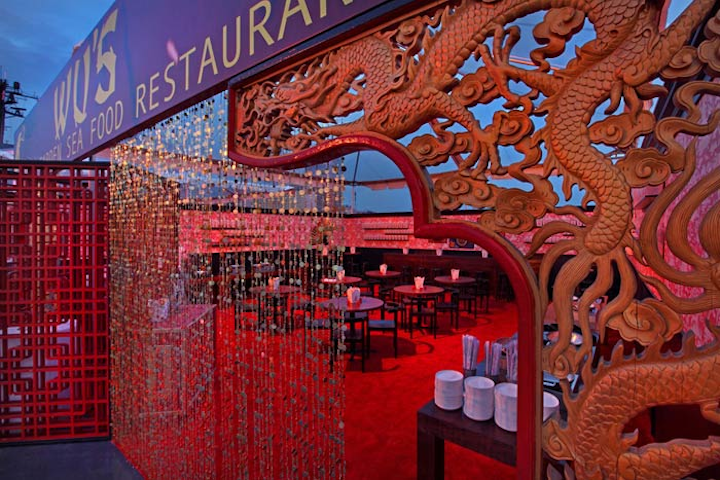 15/40 Productions replicated the Chinese restaurant from Men in Black 3 as part of the vignettes housing the buffet stations. A deli, named for director Barry Sonnenfeld, included a fake brick exterior, a display of plastic deli meats and cheeses, and framed caricatures of the movie's cast lining the walls.
Photo: Line 8 Photography 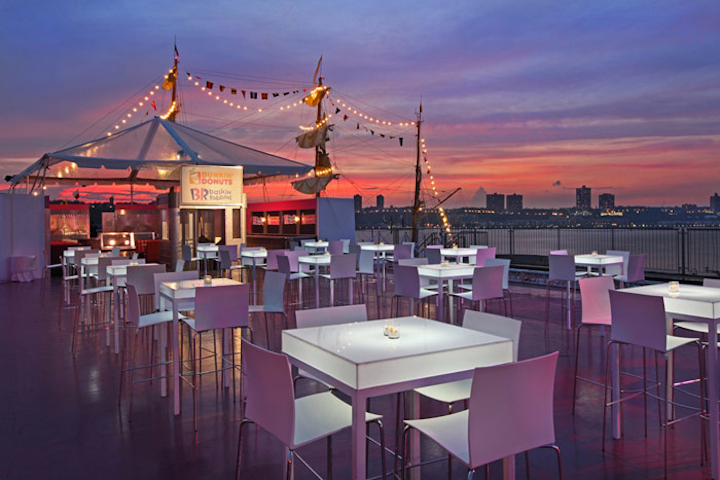 At the far end of the space was the diner created for Dunkin' Donuts and Baskin-Robbins, complete with red booths and a display case.
Photo: Line 8 Photography 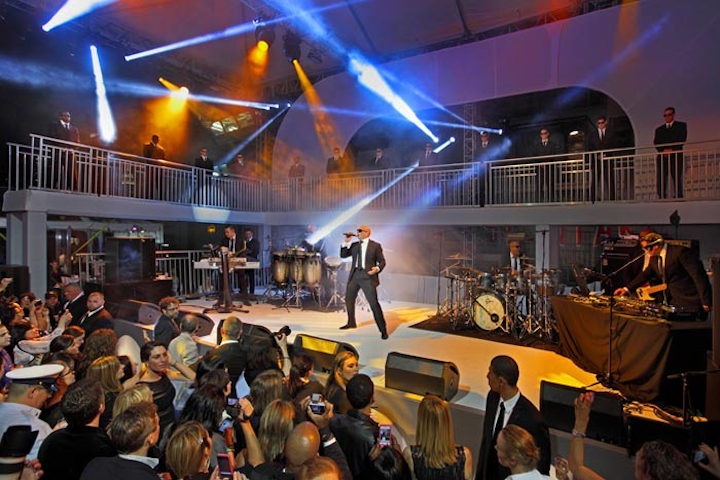 Pitbull, who wrote and recorded Men in Black 3's theme song "Back in Time," performed at the event. As a fun way to include an iconic visual from the film, the rapper and his band wore black suits and shades as did the 15 actors that stood watching the act from the stage's mezzanine.
Photo: Line 8 Photography 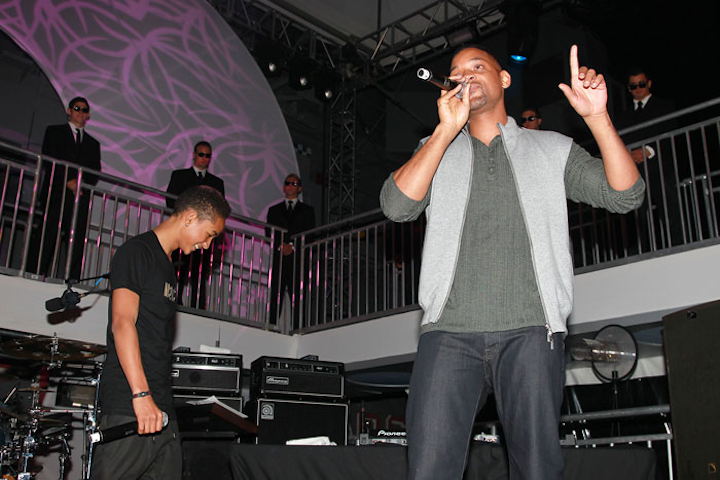 In a surprise move, Will Smith joined DJ Jazzy Jeff on stage. Smith and his son Jaden belted out some songs, including the theme from the Fresh Prince of Bel-Air and 1991 hit "Summertime."
Photo: SPE Inc./Dave Allocca
More in Strategy