From gamification to swag-for-post strategies, try these tips for encouraging guests to get on social media from their smartphones.

It's no accident or stroke of good luck when an event generates thousands of social media posts. To get guests working those smartphones, try these ideas for subtly (and not so subtly) encouraging them to post—including gamification, post-for-swag strategies, automated posting with R.F.I.D., and more. 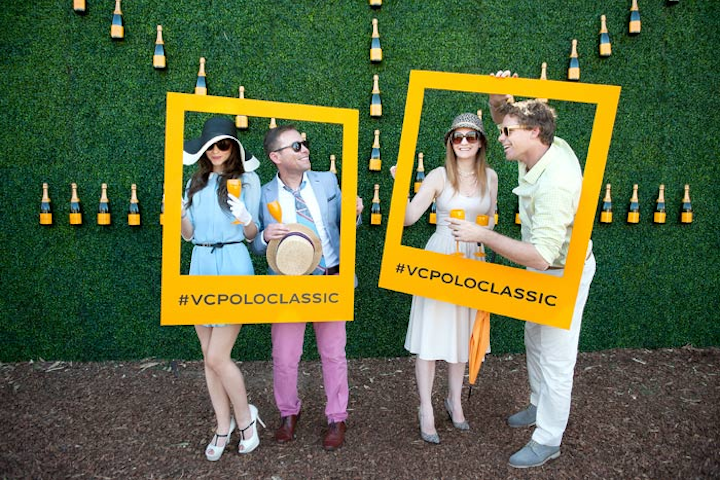 For a highly visual—and Instagram-friendly—photo opp, social media prompts served as props against a grassy wall decorated with Veuve bottles at the fourth annual Veuve Clicquot Polo Classic at Will Rogers State Historic Park in Los Angeles on October 5. Working with Veuve director of communications Christine Kaculis, BrownHot Events produced the event once again with the chic, subtly branded details that characterize the annual sporting event. 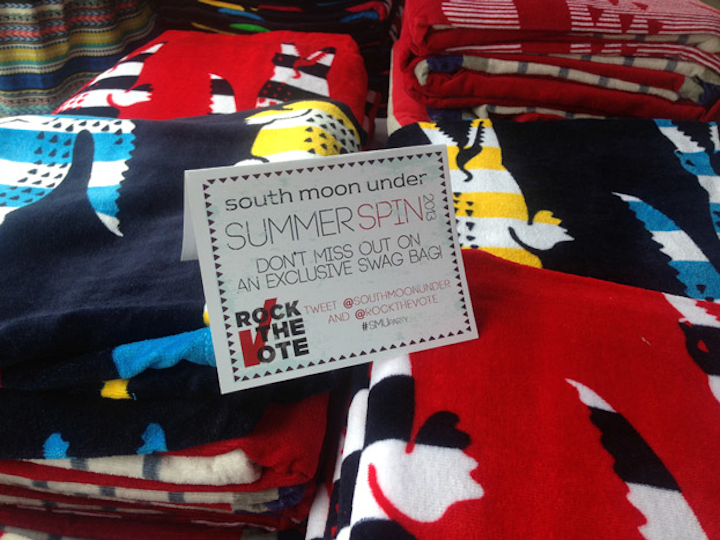 Retailer South Moon Under partnered with Rock the Vote for its inaugural Summer Spin Pool Party August 3 at the Embassy Row Hotel rooftop. To expand the reach of the intentionally intimate pool soiree beyond its 100 invite-only guests, event planner Jessica Hoy of NeuProfile put a social media spin on a familiar item: the gift bag. Converse, Lacoste, Stila, Kate Somerville cosmetics, and others contributed beach-related products like towels, sunglasses, and sunscreen to the gift bags. Hoy set up stations for each of the 11 sponsors with tent cards of the hosting brands’ Twitter handles and event hashtags. Bloggers and other partygoers took photos of the tables and wrote about the products individually rather than just collectively in a single story. Guests then showed a staffer their tweets on the way out to receive a bag.

Make Your Live Twitter Feed Too Big to Miss 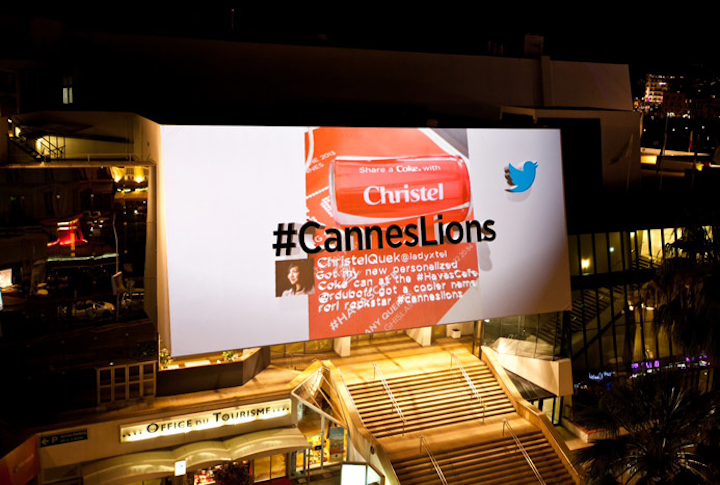 As the sun went down in Cannes, France, June 17, Twitter fired up a 40,000-lumens Barco projector mounted on a roof 150 feet across a street from the Palais des Festivals et des Congrès. The venue was the site of the Cannes Lions International Festival of Creativity, a weeklong award program to recognize creative excellence in advertising and communications. For the next several hours, a 3-D projection of tweets using the official event hashtag, #CannesLions, appeared on a 35- by 65-foot billboard located 30 feet above the venue’s entrance. The digital activation, created by Incredible Machines, ran for five hours that night and for the next three nights, while during the day the billboard showed a static image of the hashtag printed on canvas. The top tweets with the hashtag were projected onto the billboard at night, and the display also included live tweets from specific users that were selected by Twitter. The projection was a success, garnering substantial interest from the festival’s 12,000 attendees and contributing to more than 91,000 tweets using #CannesLions. That’s a 51 percent increase compared to 2012 and translated to a total reach of 542 million people, according to Buzz Radar. To generate excitement the first night, Twitter hosted a gathering in a penthouse across the street from the billboard right before the projector turned on. 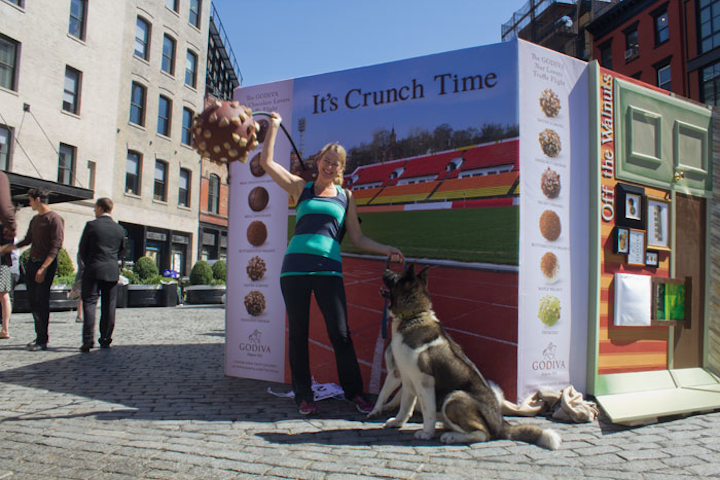 Godiva Chocolatier designed part of a new product launch to promote social sharing. The Godiva Truffle Takeoff Tour introduced truffle flights, which package six truffles along a similar theme, arranged by intensity, like wine or beer flights. At the New York kickoff September 17 at Gansevoort Plaza, passersby could sample truffles and pose for photos in front of six tableaux. Playing off of the campaign tagline of “every truffle tells a story,” the tongue-in-cheek scenes included the tiramisu truffle's “Tiara Miss-U Pageant,” where people could wear tiaras and sashes on a stagelike setting, a “Take Flight” scene in which people stood in front of wings created from frilly feathers, and a sports-theme “It's Crunch Time” scene in which people could lift dumbbells that had giant nut truffles in place of weights. Large screens displayed social posts that used the #TruffleTakeoff hashtag. 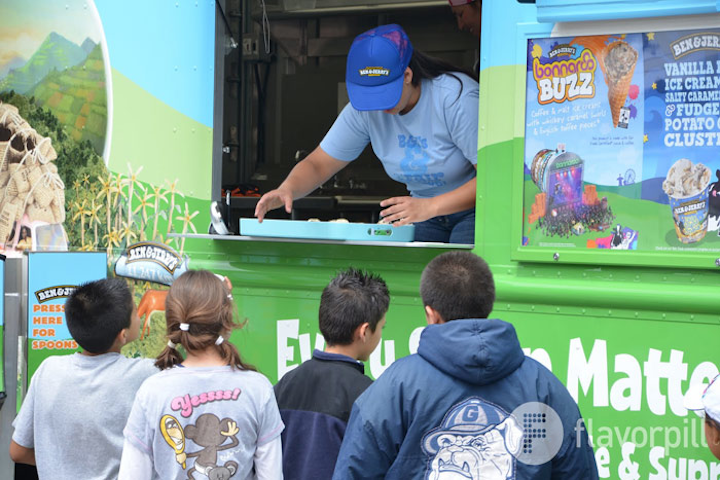 Ben & Jerry’s dished out about 16,000 cups of free Bonnaroo Buzz, Late Night Snack, and other flavors of its ice cream—and gained more than 2,000 new Twitter followers—during its Summer Scoop Truck Tour in Miami in 2011. The program, managed by Gigunda Group, invited the brand’s fans on Twitter and Facebook to help determine where the truck would stop each day, with the goal of raising the brand’s profile in the Miami market and attracting new customers. 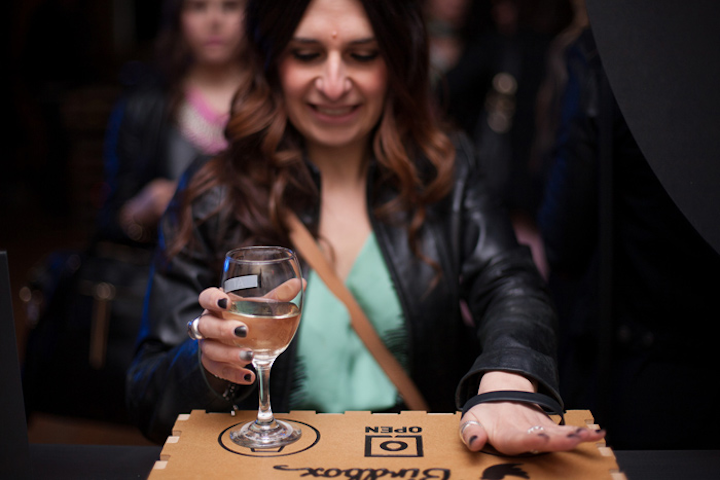 Wine tastings typically stick to a format that involves stations, swirling, and sipping, but a recent event in Toronto broke free of any staid formulas. Underscoring its company name, Open Wine hosted an event at 2nd Floor in April that had a “Be Open” theme, and guests were encouraged to open themselves up to more than just new types of vino. Plenty of the host company's product was on hand, but tasting the wine was just a jumping-off point for a night that included ping-pong tournaments, liquid-nitrogen doughnuts, temporary tattoos, and lots of tweeting. Guests placed R.F.I.D.-enabled wine glasses down on the so-called “Bird Box,” which was created for the event and pre-programmed with action tweets, which encouraged guests to participate in various activations at the event. The tweets from @Open_Wines included: "Hey @[user], Damn, you look great. Find our photog @textstyles + pose for a photo so we can remember this FOREVER. #BeOPENparty." 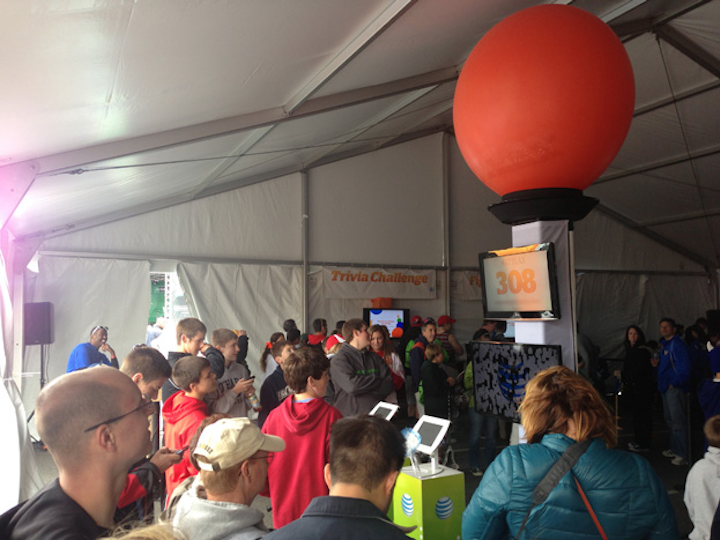 In an effort to find an innovative way to encourage tweeting at AT&T-sponsored events, Team Epic worked with Brightline Interactive to develop what it calls a “Twitter balloon”: a balloon six feet in diameter connected to an air compressor that is activated by tweets with a particular hashtag. “There are a lot of Twitter walls that show tweets as they come in, but this performs a physical action and it happens within less than a second,” said Andrew Knutson, manager for Team Epic. “As soon as you tweet, you hear the air going to the balloon, which is pretty cool. You’ll see crowds forming, especially as the balloon gets bigger.” AT&T unveiled the balloon at the N.C.A.A. Final Four men's basketball championship last spring and has since used it at events such as the Outside Lands Music & Arts Festival in San Francisco, the College World Series in Omaha, CMA Music Festival in Nashville, and Music Midtown in Atlanta. Signage at the events encourages attendees to tweet with a particular hashtag. Each tweet triggers a burst of air into the balloon, and the person whose tweet causes the balloon to pop wins a prize such as an AT&T phone. 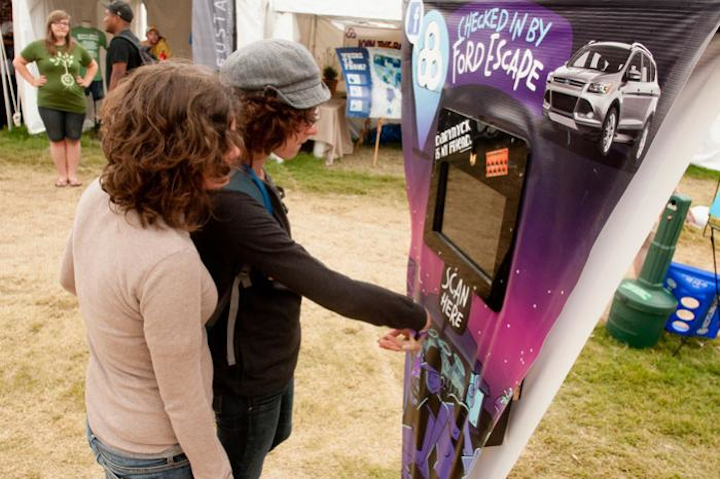 As the 80,000 attendees at last year’s Bonnaroo Music & Arts Festival celebrated on a Tennessee farm, news of their daily activities was posting to Facebook, creating nearly 1.5 million social impressions. But the attendees weren’t pulling out their smartphones to connect to Facebook; instead they were swiping wristbands with R.F.I.D. technology at one of 20 check-in portals around the 700-acre venue. 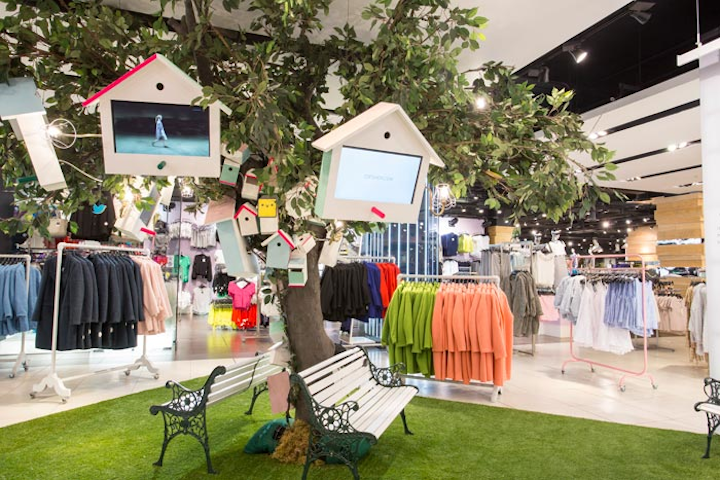 At London Fashion Week in September, Topshop tested a new app that allowed it to transmit photos, Web links, and other content to mobile devices using sound. The mobile app Chirp, available as a free download, shares data via a 1.8-second series of notes that sound similar to birdsong. The “chirps” played on speakers at the show in Regent’s Park and also in Topshop’s Oxford Circus store, where the retailer created what it called a “digital garden” with monitors suspended from trees like birdhouses. Folks within earshot of the speakers who had the app open on their phones instantly received the content, which included runway images, photos of the clothes being made, backstage activities, and hair and makeup preparations. Recipients could tap on the images to receive additional information, and they could also share the images via Twitter, Facebook, and email. 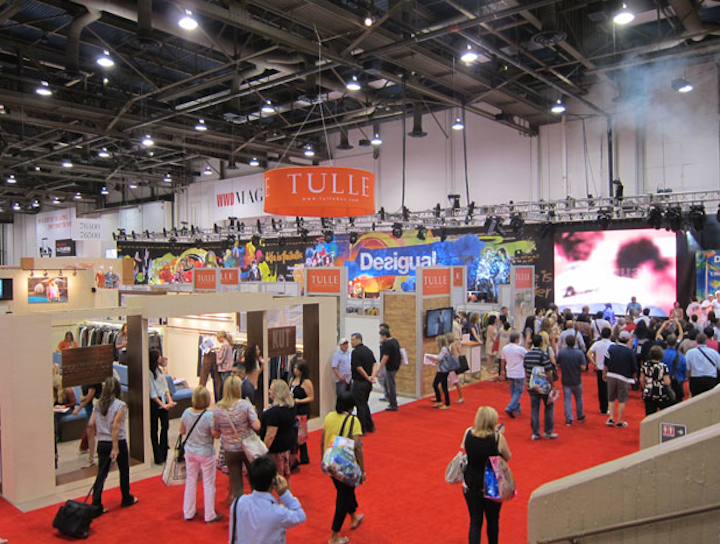 Magic, the massive fashion trade event in Las Vegas, wants to be a 365-day-a-year platform that lives far beyond its venues’ walls. To that end, Magic tapped more than 50 official bloggers to curate content throughout the 2011 show. The selection was based on the quality of bloggers' content, unique points of view, and their understanding of the business of fashion. 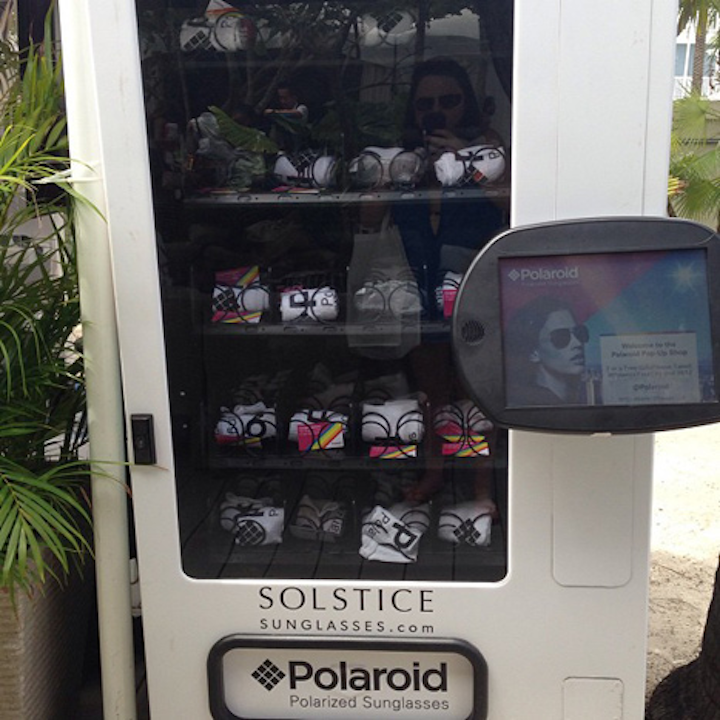 To get a treat from a Polaroid vending machine at Ocean Drive's Sun Covered pool party as part of Mercedes-Benz Fashion Week Swim in Miami, guests had to tweet a code that would activate the machine.