Bright colors, Instagram-worthy installations, and other trends will pop up at next season's benefits. 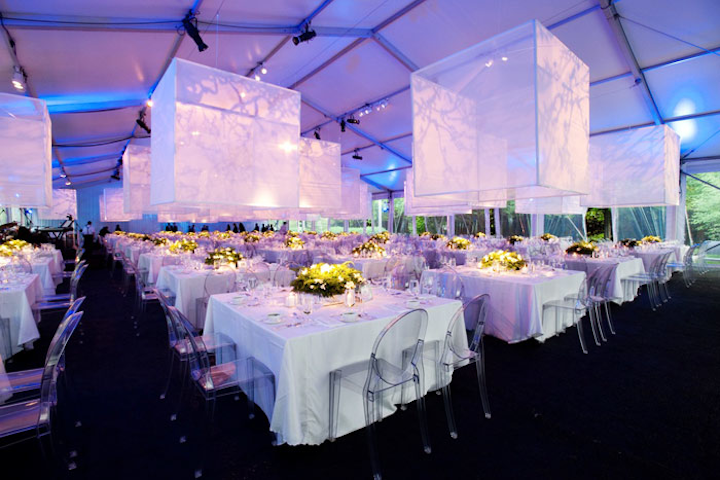 In 2012, HMR Designs gave an event at the Harris Theater all-white decor with large transparent cubes that were suspended from the ceiling in the dining area. White will also be on-trend for galas this spring.
Photo: Fandl Photography

As winter draws to a close, planners and designers across North America are finalizing plans for major spring benefits.

In Chicago, the Revel Group is working on several large-scale fund-raisers, including the Joffrey Ballet's Spring Gala on April 15. In terms of colors, the design team has "seen a huge shift from neutrals to impactful and saturated colors," says chief creative officer Sarah Banasiak. For upcoming galas, the team will either use bright, bold colors throughout a space, or use color blocking. Vibrant hues will also play a part in the overall look of the California Science Center's Discovery Ball on May 20. Inspired by the center's newest NASA artifact—an external tank called ET-94—the gala will have a bright orange color palette.

David Stark is handling design for several New York galas this spring, including benefits for Carnegie Hall, the Robin Hood Foundation, and the Metropolitan Opera. One of the trends he's seeing is plenty of white. "It's not just for weddings anymore," Stark says. "We've spent so many years searching for the right color and pattern for table linens and decor that white all of the sudden seems so new and radical as a choice."

For flowers, the Revel Group is putting an emphasis on modern, architectural arrangements this coming season. The firm will also replace traditional centerpieces with custom art pieces and will use tabletop LED fixtures to highlight the unusual tabletop items. And for textures, the Revel Group is taking inspiration from spring fashion trends. The team will has been working with sheer printed panels that are lit up to create an ethereal look and layering spandex fabrics with netting to reference fashion's "athleisure" trend. The company is also hanging custom patterned fringe in unexpected places. "Fringe gives any space a sexy movement," says Banasiak.

Stark is also seeing fashion trends influence events. "Like the craze for customization in the world of sneakers, the desire to customize items at events is high," he says. "Whether that [means] live silk-screening, foil-stamping monograms, or embroidery, guest favors ... are becoming unique and differentiated."

Another trend Stark cites: nonprofits are building "creative, interesting, and radical installations that are brand-right and inspire guests to snap [pictures] and post [to social media]." At the Discovery Ball in Los Angeles, the ET-94 will be displayed at the event to create a similarly photo-worthy moment. For the first time this year, planners are hosting the gala outside of the Science Center, and the NASA artifact will "act as a fourth wall" of the event space at Marina del Rey.

"We wanted to incorporate this enormous artifact into the partyscape, since it is the reason we are celebrating," says Christina Sion, vice president of food and event services at the California Science Center. "The event will be set up in a large parking lot near where the ET was offloaded from the barge. At the end of the party, guests will have a chance to walk along with the ET and its transportation crew as it leaves the parking lot."

Though benefits may share similarities in design next season, Stark notes nonprofits should aim to make their galas stand out."We entertain a group of people that we like to say are out nine nights a week," he says. "Thus, surprise or the unexpected is the most important aspect of a night. Whether that be in entertainment, the way the food is served, or the way the room looks, surprise is the differentiator."

Correction: The spelling of Christina Sion's name has been updated.