It's been five years since Target introduced its Go International program, an initiative through which the Minneapolis-based retailer partners with fashion designers to produce budget-friendly clothing collections. To mark the occasion, the ever-resourceful brand created the Go International Designer Collective, a limited-edition line featuring 34 dresses from 17 past Go International collaborators, and hosted an event to celebrate the launch. Held Thursday, the private dinner, concert, and shopping event filled the Ace Hotel with travel-inspired visuals and Target's namesake logo splashed all over.

"Target is proud of the Go International program and its impact on American culture, and the fashion and retail industries. We wanted to celebrate the five-year anniversary of Go International in a fun, memorable way with the designers, media, and friends who helped make it an incredible success," Target spokesman Joshua Carter said.

Rather than building a free-standing pop-up, as it has for past Go International collection launches, Target partnered with Opening Ceremony, which previously played host to the Proenza Schouler for Target temporary shop at its SoHo location in February 2007. This time around, the brand used the boutique's Ace Hotel outpost to sell the new line, and for Thursday's event expanded into the adjacent lobby and in-house restaurant the Breslin. Extra! Extra! was tasked with the production of the evening affair, working closely with Target's own internal team to conceive and execute a concept in line with the playful, trend-minded identity of the brand and its program.

As Target has tapped designers from a wide variety of backgrounds for Go International—past capsule collections include apparel from Alexander McQueen, Jean Paul Gaultier, Proenza Schouler, Thakoon, and Alice Temperley—the event's creative team looked to classic travel imagery to embellish and complement the hotel's existing Americana aesthetic. Antique-style luggage labels bedecked a tent set up on Broadway to accommodate arrivals, and designer names replaced locations on signposts between the store and the main event space. Piles of old-fashioned trunks, suitcases, and duffel bags topped with wood formed high tables around the lobby pillars, and national flags hung over the lobby bar.

The most elaborate decor piece was a backdrop for the stage where singer Santigold, drummer Sheila E., and DJ-violinist duo Mia Moretti and Caitlin Moe performed. The three-dimensional structure was designed by Extra! Extra! and replicated the road signs of the collection's ad with a collage of neon arrows and signs. 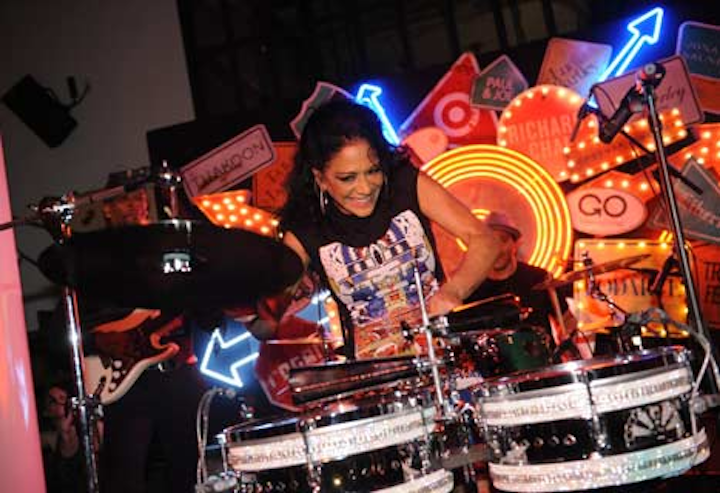 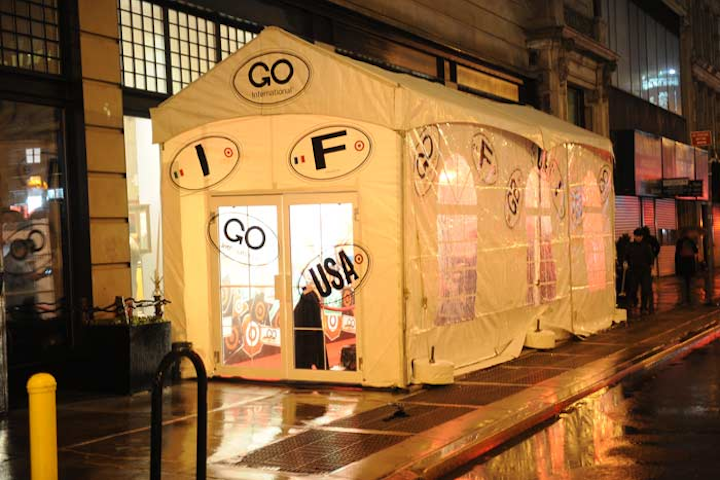 The event's production crew planned for Thursday night's rainstorm with an arrivals tent erected outside the Broadway entrance to the Opening Ceremony store at the Ace Hotel. Images in the style of vintage luggage labels decorated the structure.
Photo: Picture Group/Frank Micelotta 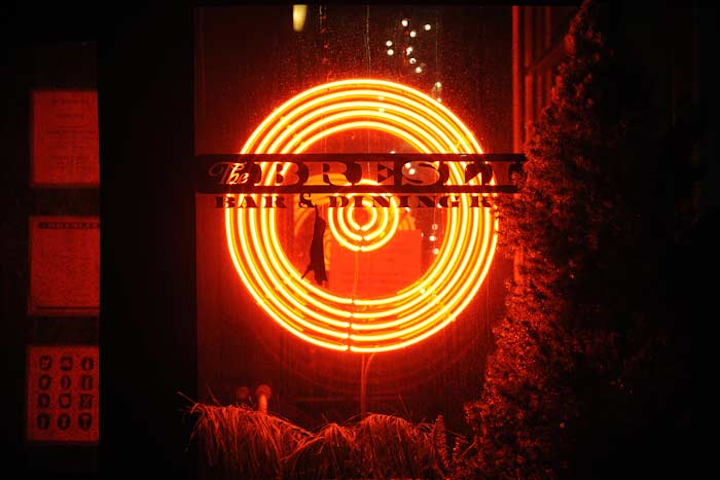 The private dinner portion of the launch was held at the Breslin Bar & Dining Room and marked by a bull's-eye neon sign. About 100 designers, fashion editors, and celebrities attended.
Photo: Picture Group/Frank Micelotta 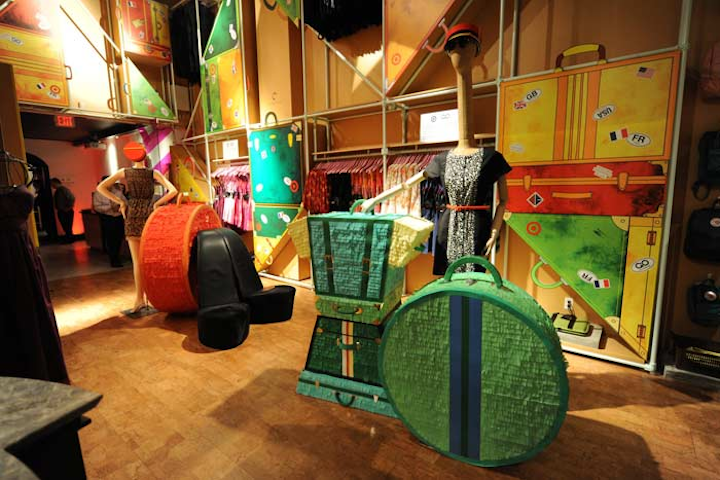 More than 250 people turned out for the party, which followed dinner and took over the Opening Ceremony boutique (pictured) and the hotel's main lobby.
Photo: Picture Group/Frank Micelotta 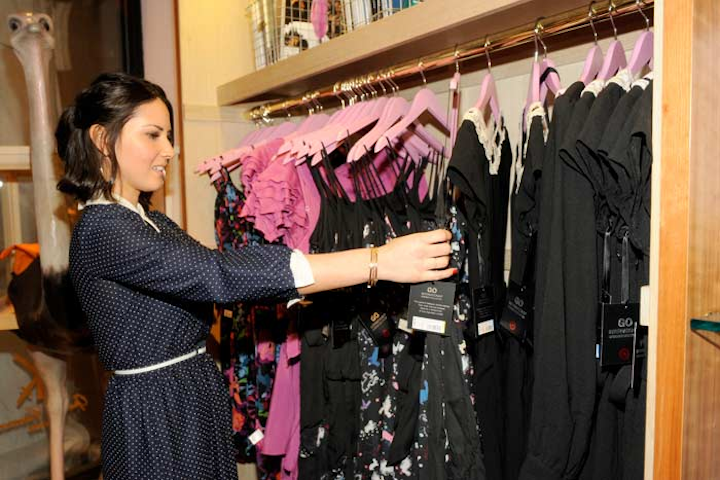 Much like at previous launches for Go International collections, Target invited guests to preview and buy the clothes before the line hit stores. The Go International Designer Collective became available to the public on Sunday.
Photo: Picture Group/Frank Micelotta 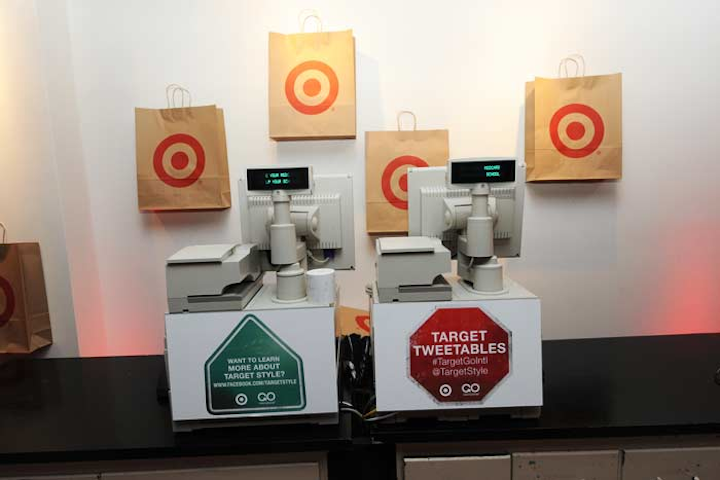 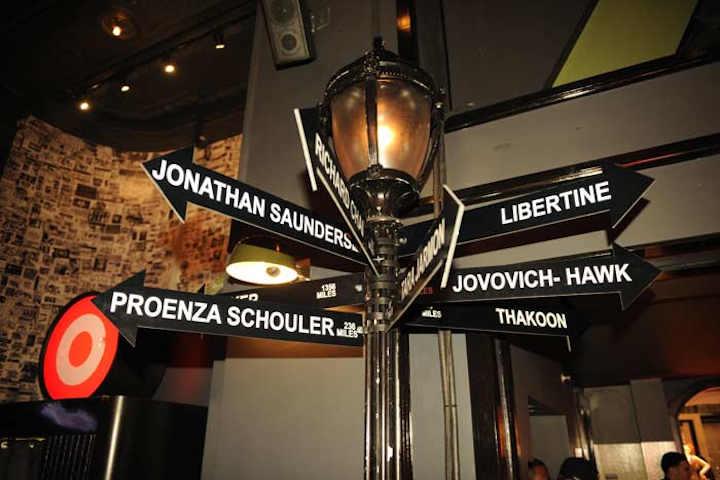 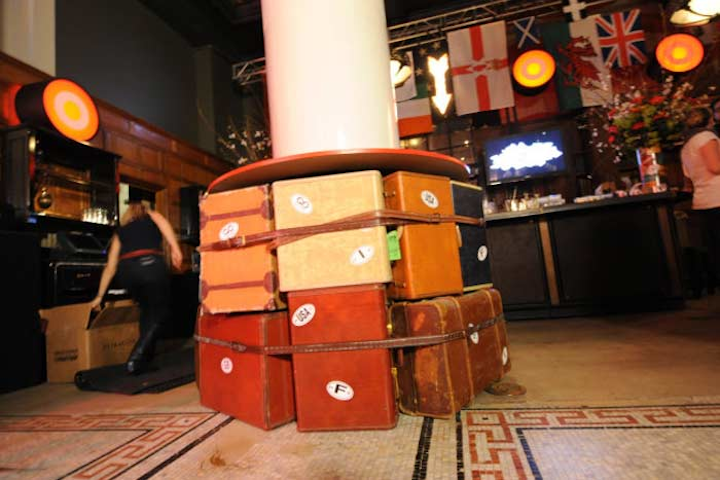 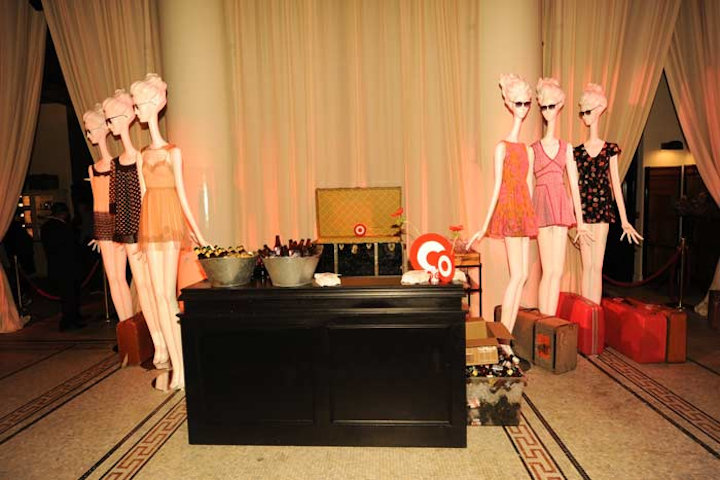 To display the clothing outside the shop, the creative crew placed dresses on nine-foot-tall mannequins, which could easily be seen once the space became crowded.
Photo: Picture Group/Frank Micelotta 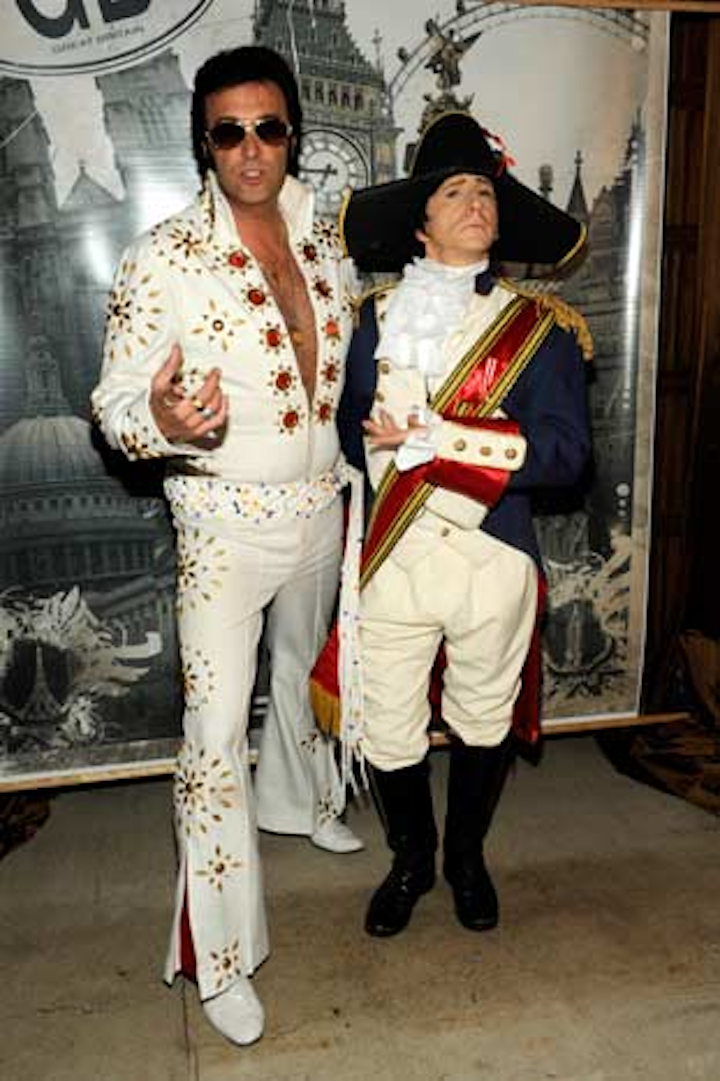 To play up the varied nationality of the designers for Go International, the event's photo booth was staffed with iconic characters such as Elvis, Queen Elizabeth II, and Napoleon Bonaparte.
Photo: Picture Group/Frank Micelotta 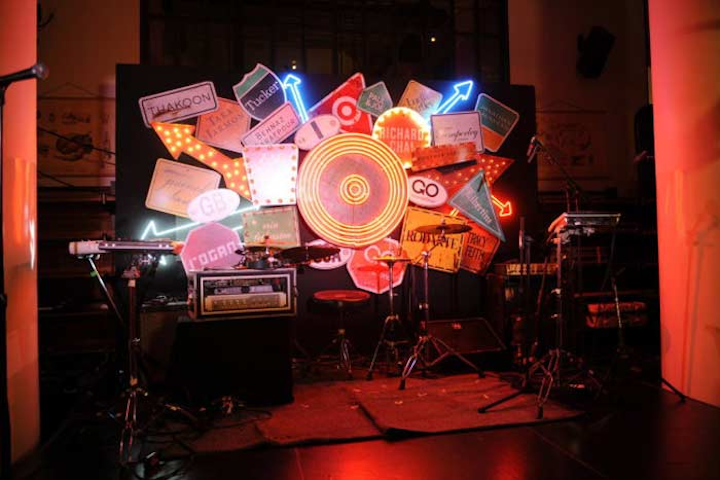 A three-dimensional, eye-catching road-sign-inspired piece served as the stage backdrop and created a light show of sorts for the night's performances.
Photo: Picture Group/Frank Micelotta 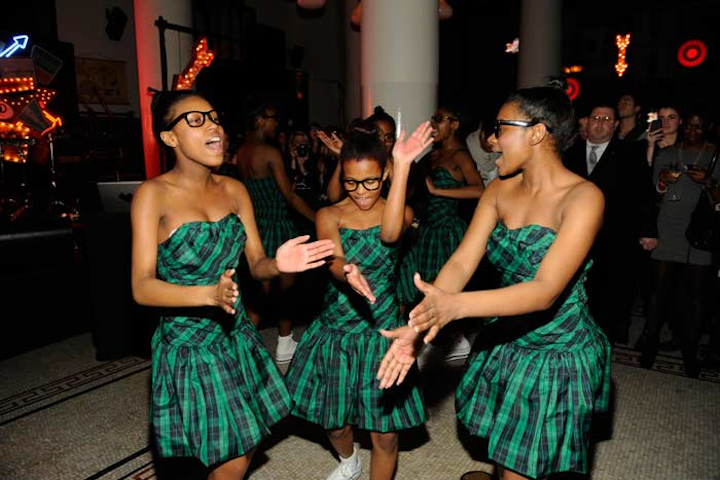 To advertise its partnership with Target, Opening Ceremony produced a video for the Go International Designer Collective featuring the Bad News step team from Wings Academy in the Bronx. The troupe showed off their dance moves at the launch, wearing Luella Bartley-designed dresses from the collection.
Photo: Picture Group/Frank Micelotta 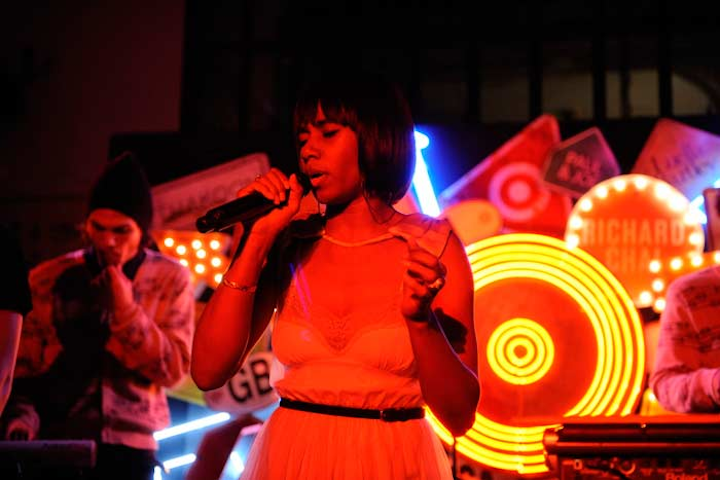 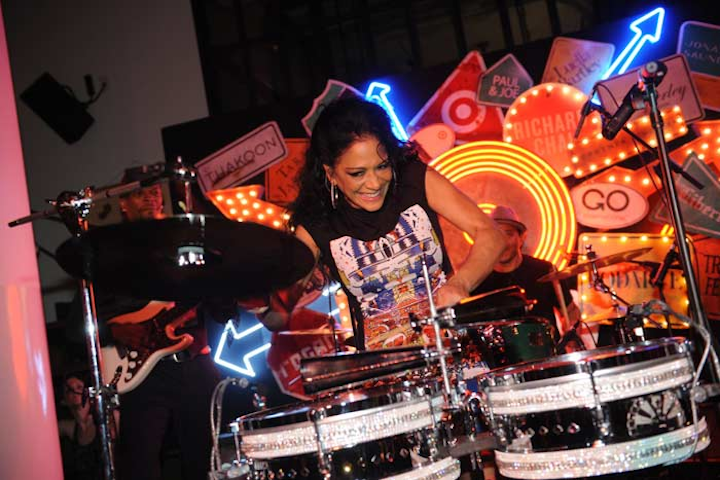