Four months in the planning, the affair was produced by Prodject founder and president Keith Baptista and project lead Jihye Song, with Christine Goppel, assistant vice president of public relations events at Cartier.

Among the modern highlights set designer Stefan Beckman incorporated into Cartier's landmark mansion was a wall-mounted Hewlett-Packard touch-screen piece intended to allow attendees to explore the brand's extensive archival content in an engaging way. "The '70s were such an interesting period and I wanted to show a lot of different aspects of the decade," said Beckman. To do so he researched the Cartier archives as well as historical and cultural images from the era. The exhibit's color scheme—Bordeaux walls with dark carpeting—was also a nod to the old-fashioned Les Must de Cartier boutiques. "It was all very '70s, but reinterpreted in a modern and chic way," added Beckman.

For the after-party at Skylight, guests entered via the Renwick Street entrance to find a custom-built 5,000-square-foot discotheque installed by Prodject. The trilevel nightclub boasted plush Bordeaux-colored banquettes, table service for food and drinks, and live entertainment by the Misshapes, James Murphy of LCD Soundsystem, and singer-songwriter Rita Ora.

"Cartier wanted to convey the spirit of the '70s, but with a modern and luxurious sensibility," said Baptista of the production, the build for which took five days, while teardown took two. To create a completely new look for the oft-used venue, the producers added a subfloor and custom painted new walls.

In lieu of using florals for the decor, Prodject paid homage to Cipullo's designs with the shape of hard-surface tables that were architectural and graphic. Even one of the dinner menu choices catered by Olivier Cheng had a direct link to the jeweler—the sweet sausage, mushroom, and cream rigatoni "D'Oro Cipullo" dish was borrowed straight from the late designer's own recipe. 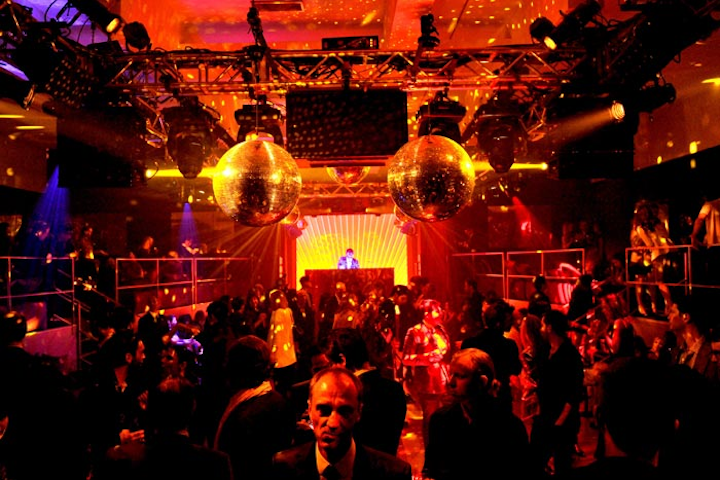 Several hundred guests gathered at the after-party, the color palette for which was red, gold, and black. The oval-shaped room offered three levels, each lined with Bordeaux-colored banquettes. In order to create the "sunken" feel for the dance floor, the producers elevated Skylight SoHo's normal floor by nearly five feet.
Photo: BFA 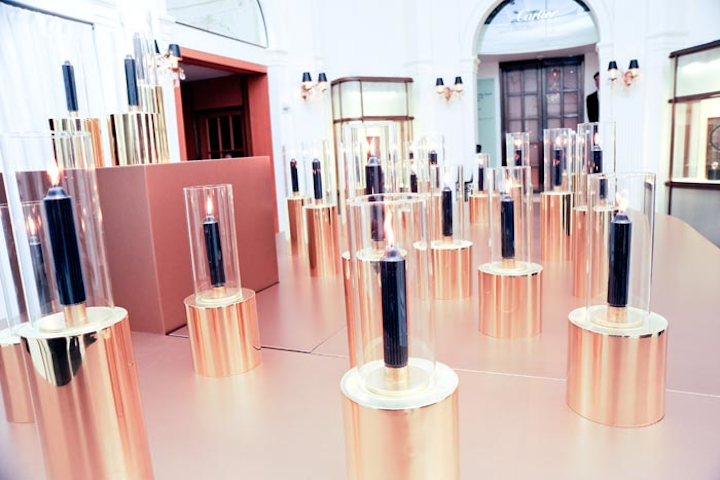 To create an inviting atmosphere at the preview, a table glowing with hurricane candles set atop brass fixtures stood inside Cartier's Fifth Avenue flagship. The installation was placed directly adjacent to the elevator that took guests to the exhibition on the second floor.
Photo: BFA 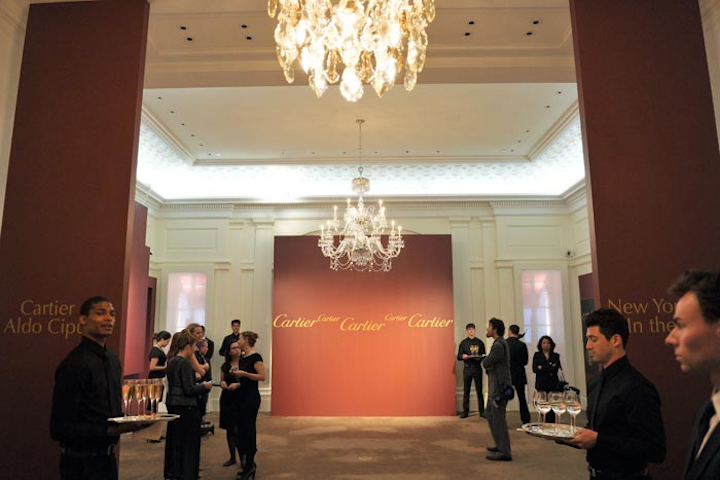 On the second floor, custom walls framed the main cocktail space, vertical pieces that also served loosely as an informal step-and-repeat. The entrance to the exhibition stood to the left, while the right side of the site held a comfortable lounge and bar in the area typically used as the customer service reception.
Photo: BFA 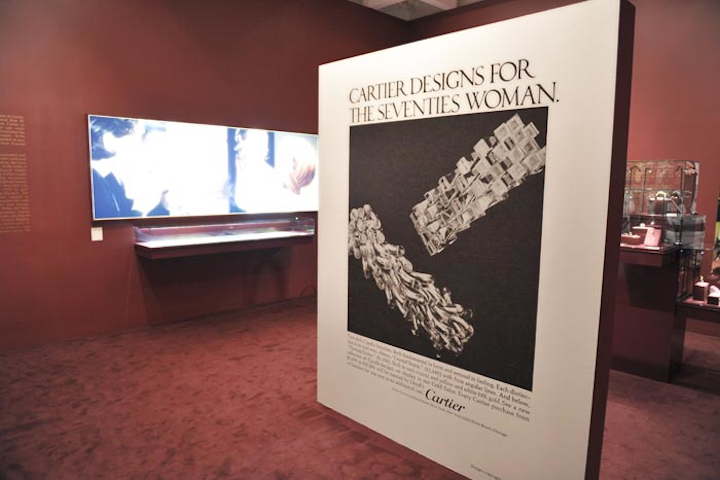 Cartier executives and Stefan Beckman curated the show with the goal of recreating the energy of the 1970s in New York, as seen through the jeweler's lens. In addition to jewelry, the organizers also placed drawings, articles, vintage ads, and scrapbooks on display to form the retrospective. Jewelry historian and author Marion Fasel provided the text and captions for the exhibit.
Photo: BFA 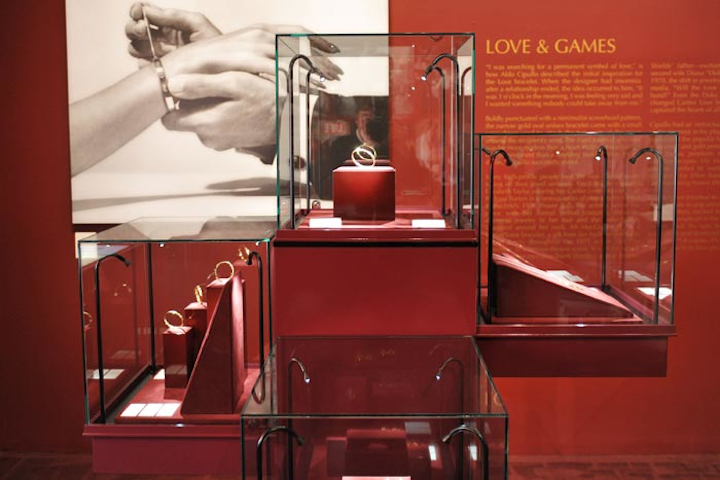 Beckman designed the display cases for the exhibition, which is open to the public through May 8, to be dynamic and distinctly Cartier. "I wanted to tell a visual story of the period through groupings that played well with the clean and modern pieces of jewelry," said Beckamn, The Bordeaux-colored walls and dark, rich carpeting evoked the old Les Must de Cartier boutiques.
Photo: BFA 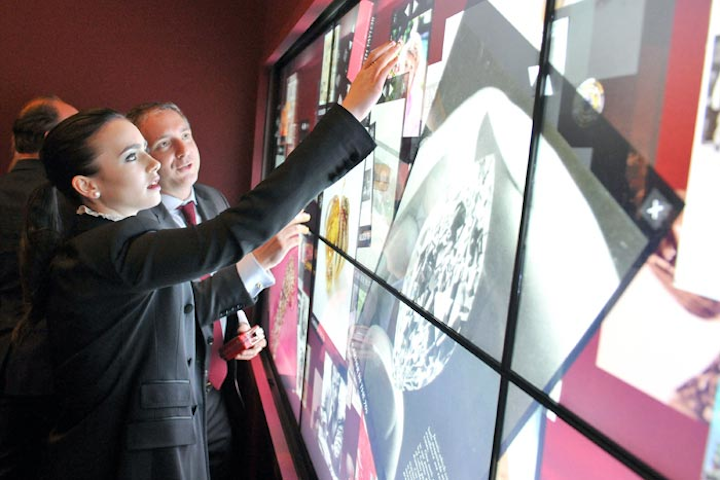 To infuse more modern, high-tech elements into the exhibit, a large Hewlett-Packard touch-screen was erected across one wall. Showcasing hundreds of images, the installation was designed to complement the exhibition and flaunt as much of Cartier's extensive content in an engaging way. Guests like actress Lily Collins (pictured) were able to access information on each image as well as articles on specific objects.
Photo: BFA 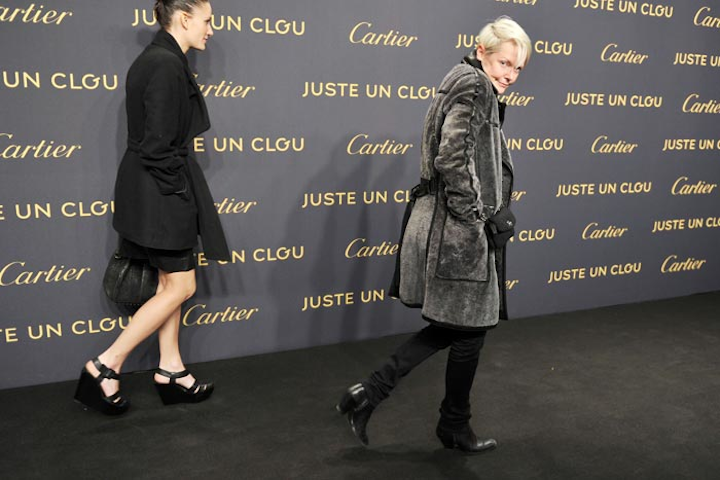 To turn Skylight SoHo into a nightclub, Prodject opted to use the Renwick Street entrance rather than the more familiar Hudson Street one. "We wanted to create the feeling of an undiscovered space," said the company's founder and president, Keith Baptista. "The Renwick entrance was a good way of changing guests' orientation."
Photo: BFA 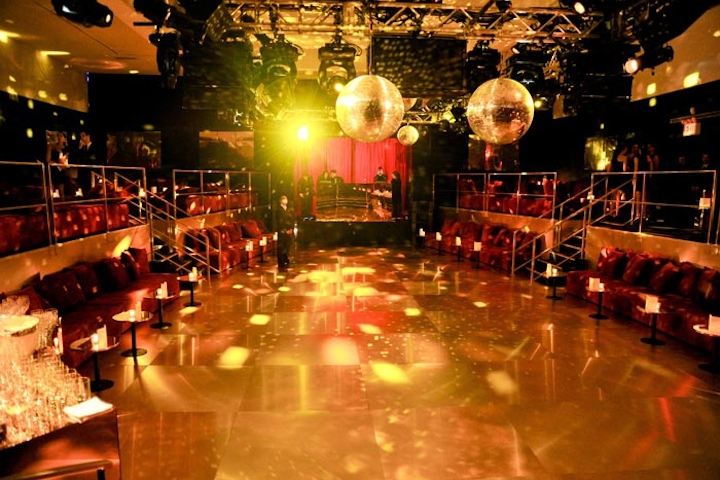 In keeping with the exhibition's '70s spirit, the producers built a club inspired by the decade and incorporated modern finishes. The addition of painted walls helped give the site a less familiar look. "We chose materials that related to the collection that Aldo Cipullo created," said Baptista. That translated to hard surfaces and architectural design elements.
Photo: BFA 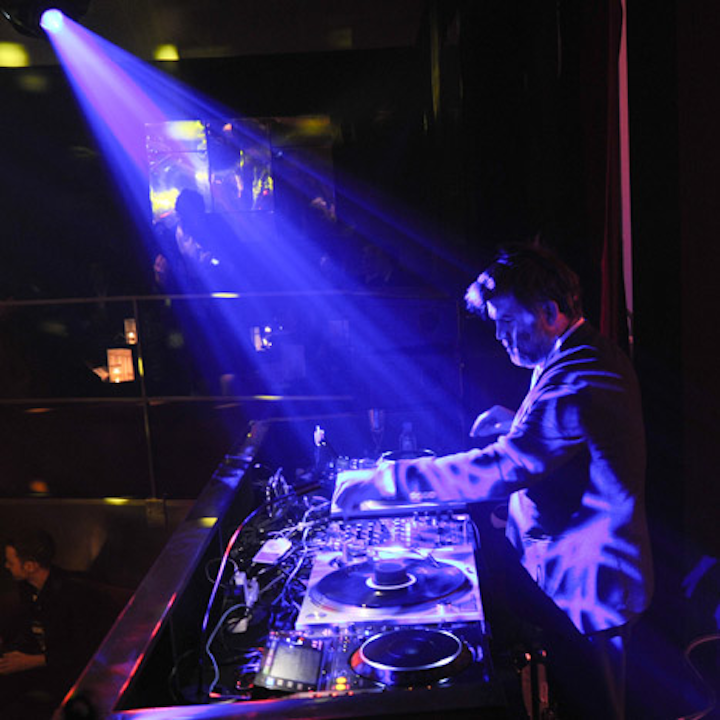 Throughout the evening, music at the after-party was largely provided by the Misshapes and James Murphy of LCD Soundsystem (pictured).
Photo: BFA 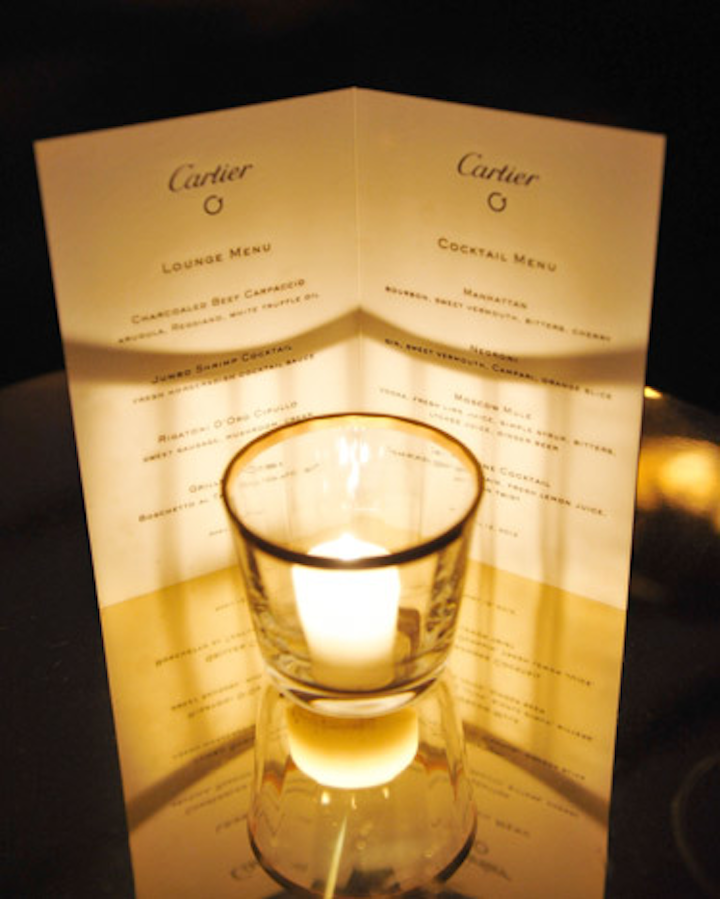 Cartier printed special menus for each of the banquettes and a fleet of female waitstaff stood at the ready to take orders. A passed "breakfast" of bites like mini Nutella and banana crepes and lemon ricotta pancakes were served later in the evening as the party wound down around 2 a.m.
Photo: BFA 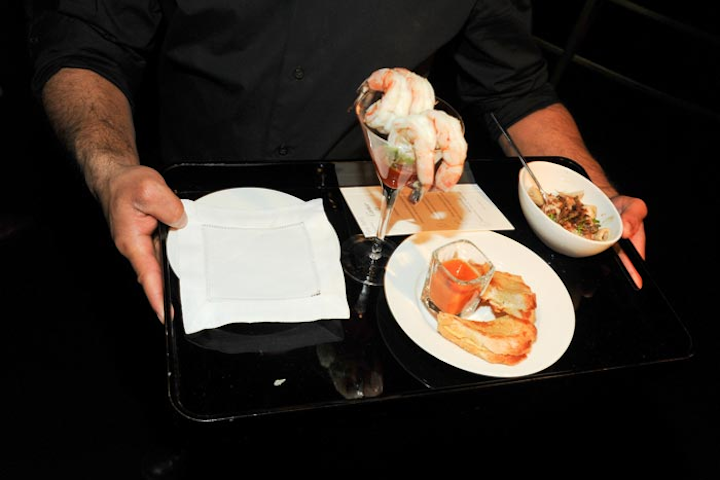 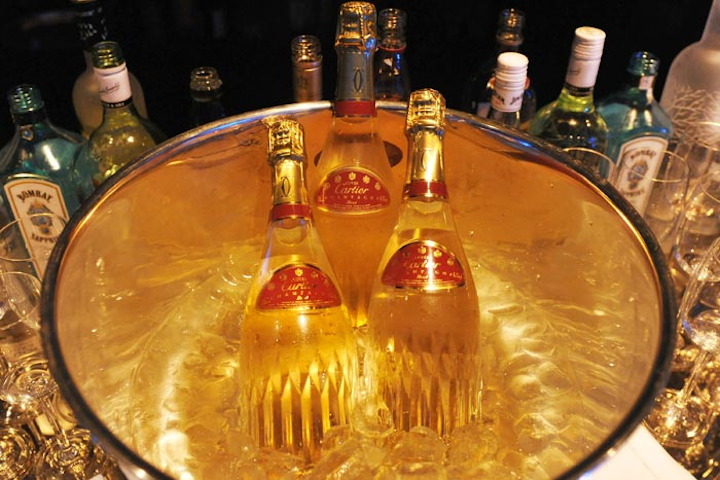 The French luxury jeweler opted to serve guests its own brand of Champagne at the event. The cocktail menu included Manhattans, Negronis, Moscow Mules, and Champagne cocktails.
Photo: BFA 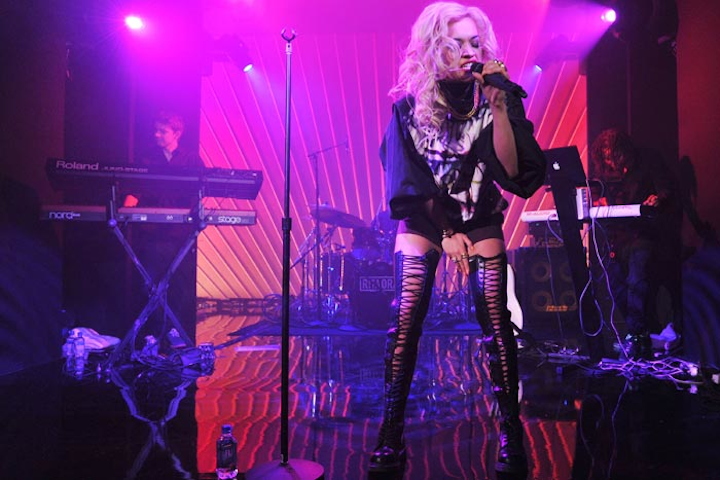 Up-and-coming singer Rita Ora, who is signed to Jay-Z's Roc Nation label, performed live for the crowd from a 20- by 15-foot stage. Jay-Z and his wife Beyoncé arrived discreetly at the party and watched the act from one of the elevated banquettes closest to the stage.
Photo: BFA
More in Event Design