How a Film Inspired the Look of This Year's C.F.D.A. Awards

The 2013 Council of Fashion Designers of America's annual award show was inspired by a film of a country estate in Yonkers—architectural visuals that unified the look and feel of the event.

Billed as the organization's most cohesive award show to date—at least from a production standpoint—the 2013 Council of Fashion Designers of America's black-tie industry celebration realized the vision of the council's president, Diane von Furstenberg. The idea was to bring to fruition creative content that eschewed the individual approach of past award shows in favor of a collective point of view.

Hosted by Bravo reality kingpin Andy Cohen, the night saw guests—including honorees Oscar de la Renta and Colleen Atwood, winners Phillip Lim, Thom Browne, and the Proenza Schouler duo, and presenters Jessica Chastain, Linda Evangelista, Hillary Rodham Clinton, and Kerry Washington—swept into the night’s narrative mood from the moment they stepped onto the graphic black-and-white arrivals carpet. Set against a signature C.F.D.A. red backdrop, which was in keeping with the spring season's runway color themes, the schematic effect was evident in everything from the entrance to the black-and-white cocktail party and even down to the catering—providing "a very elegant and unified point of view," said Mannion.

Whereas in past years, each honoree and category of nominees was introduced via its own unique—and, often, unrelated—visual cue, the award program this year grew from a film by Jun Diaz that was shot on location at the historic Alder Manor in Yonkers, the Highline Hotel, and the McKittrick Hotel over the course of one week. The film provided a thematic foundation through which all individual honoree and nominee tributes were connected. "Alder Manor allowed us to tell an interesting narrative that offered variety and mood," Mannion said. "The storytelling idea was the central focus point of view and we drew from that one place this year."

What the film achieved, beyond tying together all the various award components like never before, was the ability to take guests on a journey by using the Renaissance Revival mansion's doors and windows as portals—via well-thought-out black-and-white plates taken from the individual films, no less—into the different worlds to represent each honoree and category of nominees. "The ideas of the rooms in the mansion inspired set design and various decor elements throughout the event," Mannion said.

The build out started the Friday before the Monday awards, and tear down was completed by 5 a.m. the following Tuesday.

Following the awards, guests headed to a trio of after parties: a C.F.D.A. and Swarovski bash at Top of the Standard, Riccardo Tisci's celebration of his International Award at the Westway, and a late-night supper at the Four Seasons Restaurant hosted by Lifetime Achievement Award recipient Vera Wang. 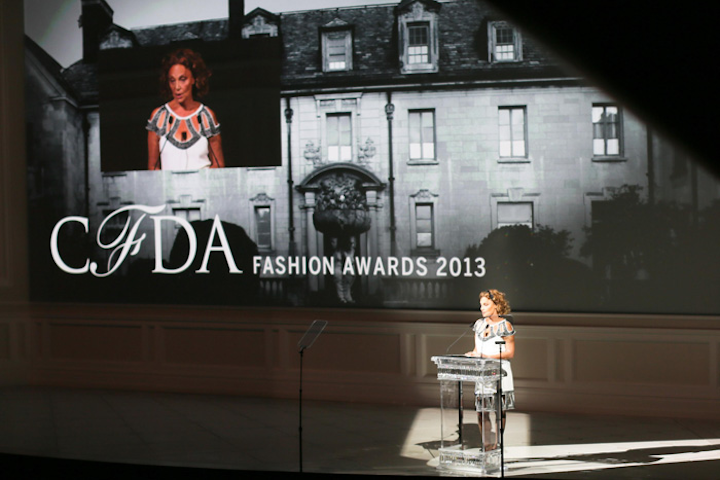 To support C.F.D.A. president Diane von Furstenberg's desire for this year's awards to have a "one point of view" design ethos, a 35- by 19-foot projection screen displayed rotating black-and-white images taken at the historic Alder Manor in the Yonkers. Each room or space represented an honoree or category of nominees to keep with the night's narrative flow.
Photo: David X Prutting/BFAnyc.com 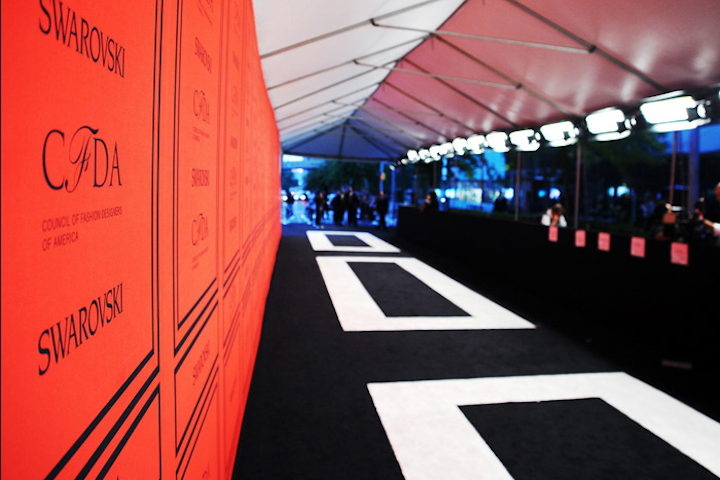 "We wanted to keep a unified design aesthetic," said KCD president and partner Julie Mannion, who oversaw the production of the awards. So from the invitation to the red carpet, a black-and-white color scheme, with a red accent, was devised to reinforce the signature color of the C.F.D.A. and what is an overarching color trend in the spring 2013 collections. The 90-foot-long step-and-repeat, designed by Laird & Partners, echoed the interior design with black molding and logos. The black carpet with white inlay, designed by KCD, measured 20 by 120 feet.
Photo: Billy Farrell/BFAnyc.com 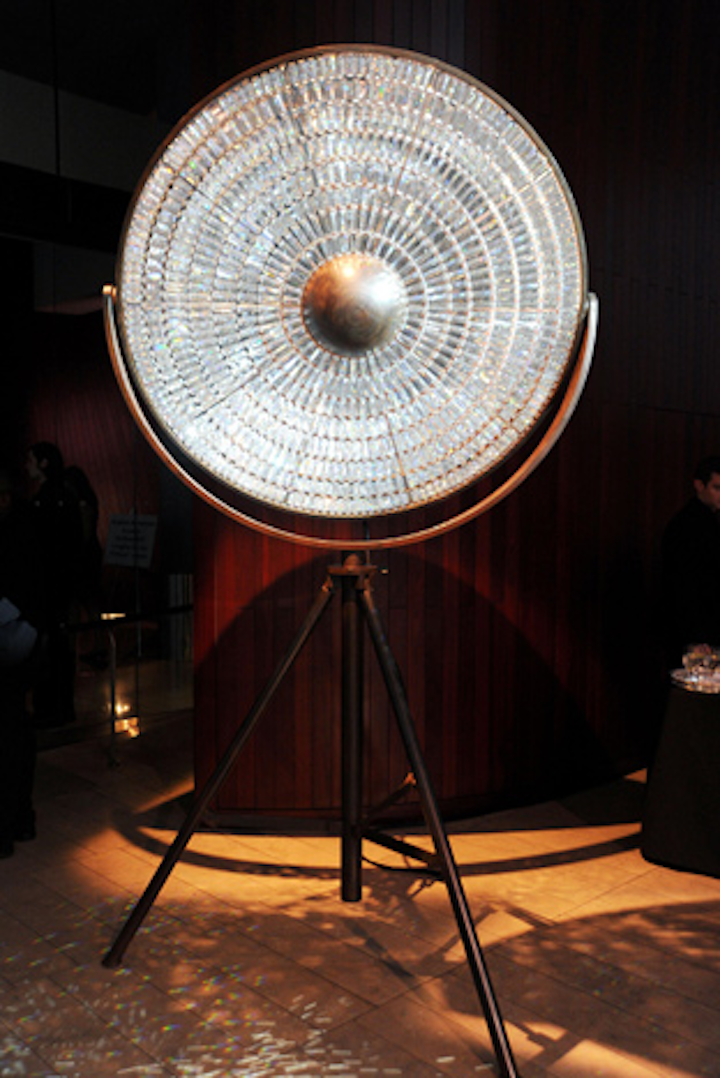 A new, standout decor piece during arrivals and cocktails was the Swarovski Crystal Palace Iris, a freestanding sculptural piece designed by the duo Fredrikson Stallard meant to be an interpretation of the human eye. The sculpture, which contained more than 600 hand-cut crystals, consisted of four separate pieces combining Swarovski crystal and different metal treatments, from gold leaf to Corten.
Photo: Billy Farrell/BFAnyc.com 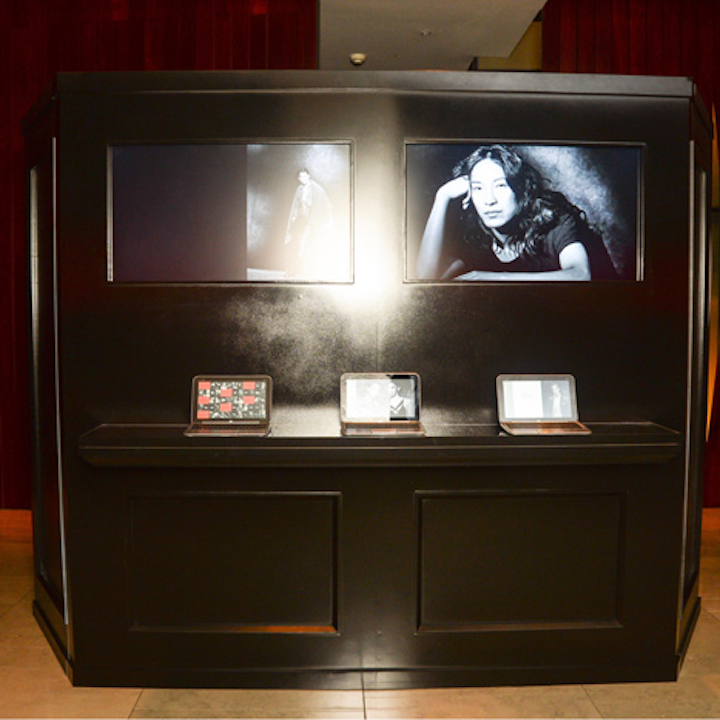 Also fashioned in black molding as part of the overall design aesthetic was corporate sponsor HP's installation that featured a specially developed app of the C.F.D.A. Awards journal on the computers. There was also a video loop of journal images shot by Peter Lindbergh on the screens.
Photo: Joe Schildhorn /BFAnyc.com 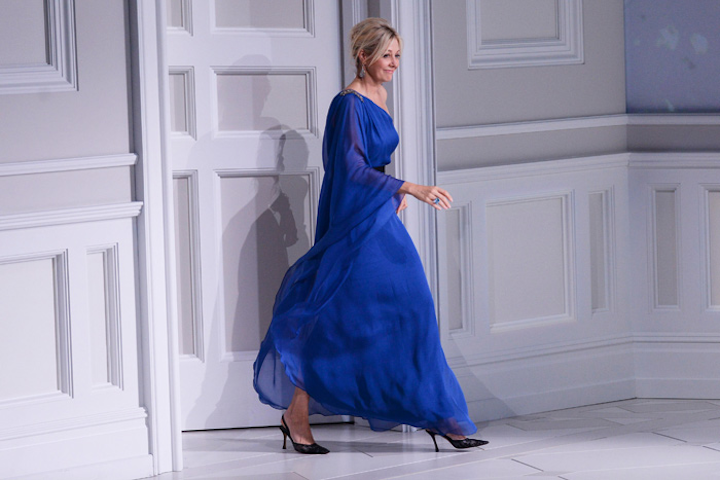 As guests entered the stage (like Nadja Swarovski, pictured), they emerged onto the custom-built 27- by 50-foot award stage from behind strategically placed doors meant to mimic the idea of looking into a room. Composed of 16 separate pieces (eight on the ceiling and four on each wall panel) spanning nearly 19,000 linear feet in total, the platform rested on a 1/2-inch-raised CNC-routed MDF floor painted with multiple coats of sealer.
Photo: Joe Schildhorn/BFAnyc.com 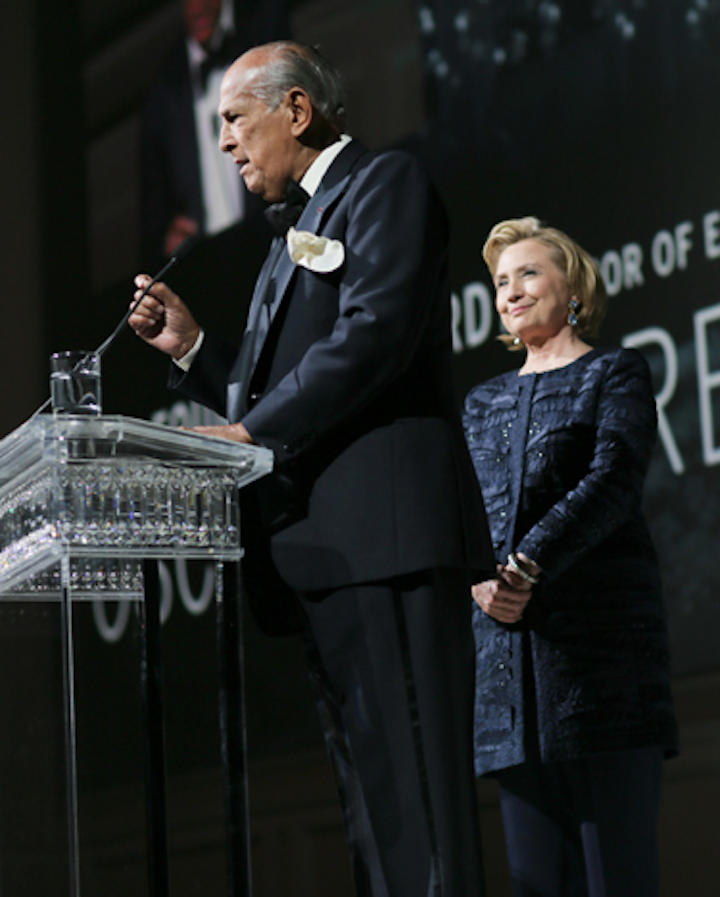 A new Swarovski crystal lectern, composed of about 300 clear crystals (a mixture of rectangular and square) and created specially for the awards, served as a centerpiece onstage. The crystals were attached to acrylic panels to create a light and airy look, which allowed attention to be focused on award recipients like Oscar de la Renta, who accepted his Founder's Award from Hillary Rodham Clinton.
Photo: David X Prutting/BFAnyc.com 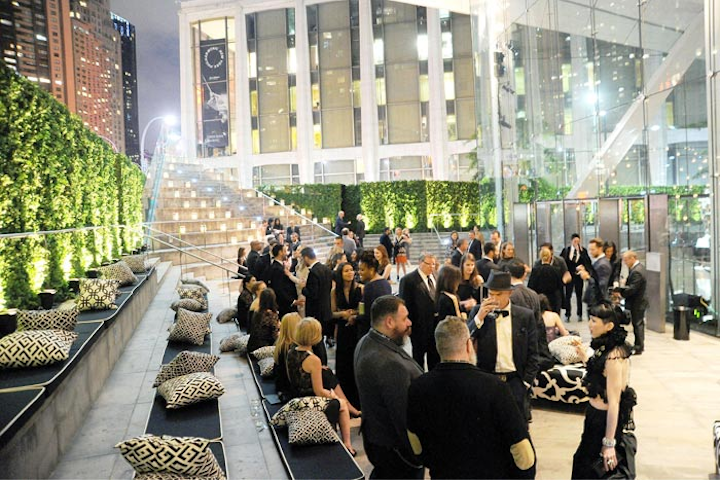 Matching the tone of the C.F.D.A. Awards journal photographer Peter Lindbergh, recognized for his black-and-white photography and elegant period setting of the award ceremony design, the cocktail hour in the atrium featured a unifying white decor peppered with black-and-white graphics. The pattern appeared on the pillows, conversation tables, and even the bars, which were marked with all-black molding inspired by the award set.
Photo: Billy Farrell/BFANYC.com
More in Event Design