Decor including vintage televisions and newsprint tablecloths set the tone for the bash.

To celebrate the return of the debate program Crossfire to television after an eight-year hiatus, CNN threw a homecoming party at the Carnegie Library at Mt. Vernon Square in Washington for 500 guests September 10. The show's signage was featured on everything from the pillars to the pillows, and since CNN is an organization devoted to covering breaking news, planners for the "Crossfire Returns" event took current events into consideration, as well.

The show's premiere aired a week earlier than expected—September 9 instead of September 16—so the hosts could address the situation in Syria. The date change did not radically affect the planning of the event and instead added an extra element to the party. “We were actually able to show the live airing,” said CNN marketing director Keisha Taylor. Screens throughout the venue and large screens in the main event space displayed the Crossfire episode at 6:30 p.m., as well as a special promo for the show at 7:30 in advance of remarks by CNN president Jeff Zucker and Crossfire hosts Newt Gingrich, Stephanie Cutter, Van Jones, and S.E. Cupp.

Since the event also was scheduled on the same night as President Obama’s speech on Syria, the party was extended so guests could watch the remarks. While it might not have been in the original plans, screening the president’s speech was a given. “I don’t think anyone would expect anything else from CNN,” Taylor said. Especially with the event’s guest list, which included a crowd of politicians, pundits, and journalists like Donna Brazile, Wolf Blitzer, and Greta Van Susteren.

To design the event, Taylor worked with Events by Andre Wells to create a modern look that incorporated branding and the show’s signature silver, red, black, and white color scheme. The event began with a grand entrance with a red carpet and covered walkway into the Carnegie Library. Once inside, oversize signage with the hosts’ faces grabbed guests’ attention, while the Crossfire logo appeared on bars, napkins, pillows, and popcorn bags from the Popped Republic food truck parked outside. The Phillip Martin Band played jazz while guests mingled in the main room downstairs, but the event used other rooms in the space. On the first floor, guests could share photos via social media in a photo booth room, and a timeline installation in another room displayed milestones in world history and the history of CNN and Crossfire, with actual televisions specific to each decade. The upstairs area served as a lounge, with silver bar stools, quilted sofas, and tablecloths with sequins and fabric petals.

“Texture is great," said Wells, "especially in an older building like this that is very ornate."

Since the party started during the dinner hour, the menu included mini versions of entrées such as chicken enchiladas and lobster mac 'n' cheese in skillets, as well as passed hors d'oeuvres. Dessert bars held sweets like sundae fixings, waffles with sprinkles, and mojito cheesecake pops. Two specialty cocktails were also available: lavender Tom Collins and prosecco with sorbet.

While guests networked and sampled the menu, Crossfire hosts Newt Gingrich and Stephanie Cutter had to get back to work: They left to go on-air at CNN to discuss President Obama’s speech, and their commentary was of course shown on the big screens at the event. 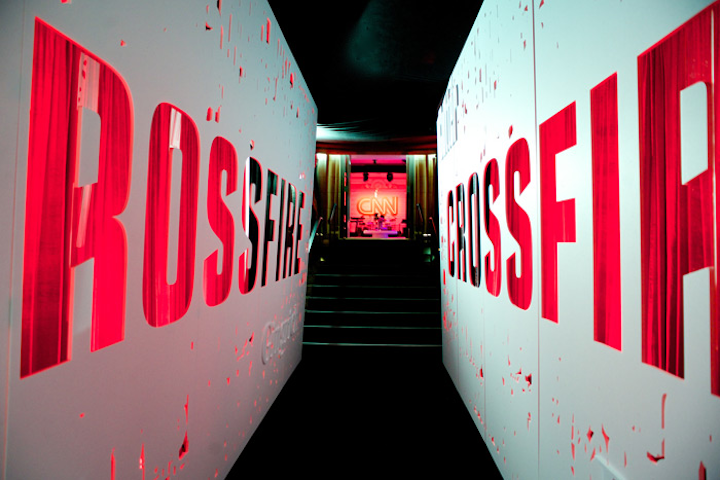 A covered walkway and the logo in giant red letters created a dramatic entrance to the Crossfire premiere event.
Photo: Ben Dozer 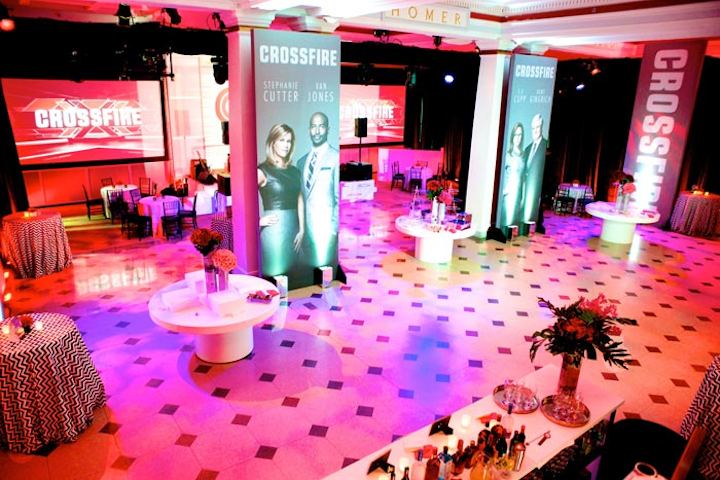 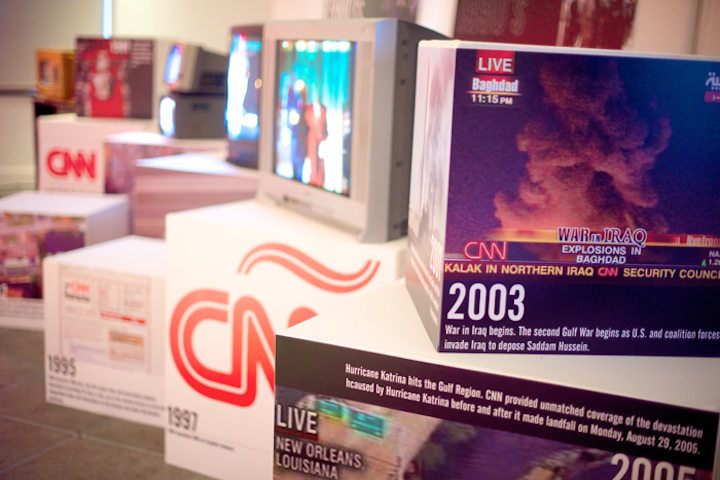 A timeline of events in world history and in CNN's history incorporated different models of televisions throughout the decades.
Photo: Ben Dozer 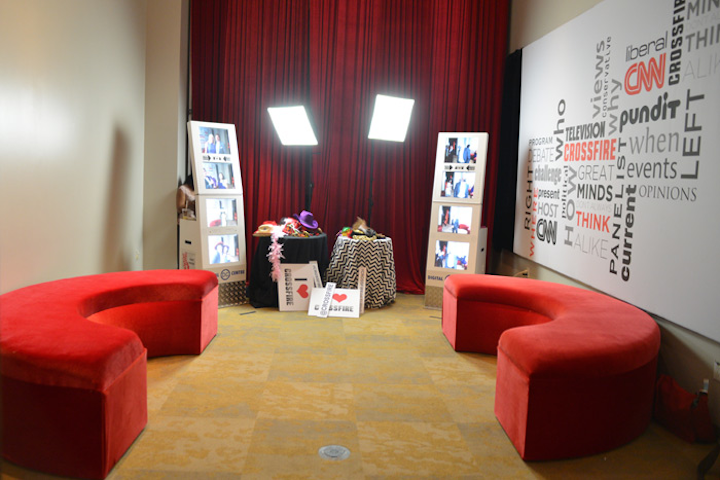 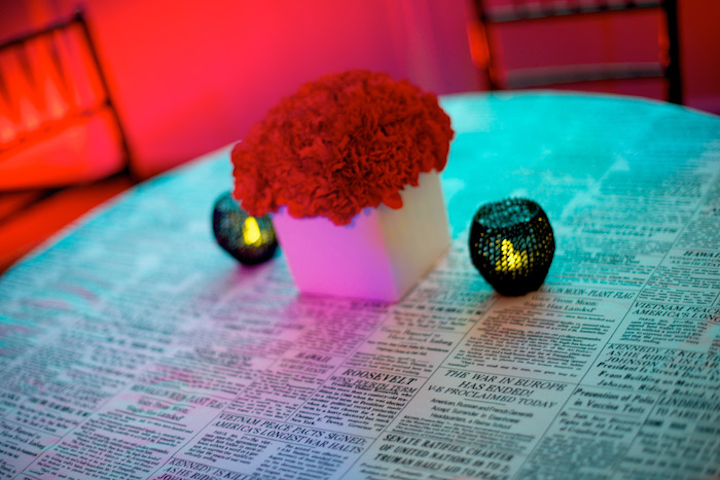 Newspapers were used as decor on top of tables or wrapped around vases for flower arrangements by Amaryllis Inc.
Photo: Ben Dozer 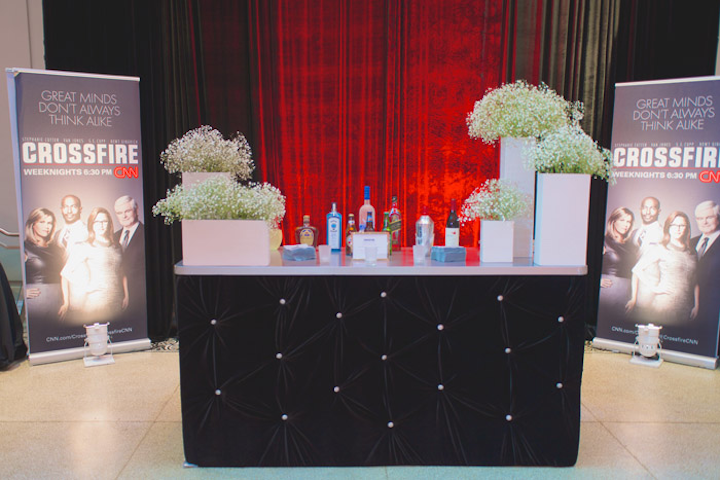 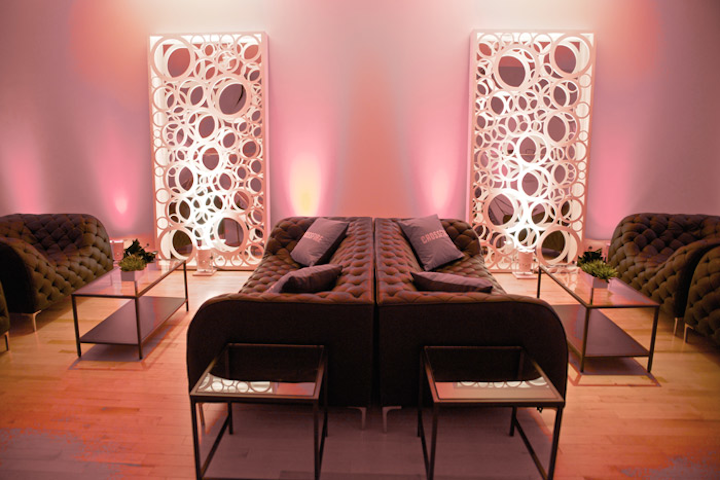 The upper level at the Carnegie Library served as a quieter lounge space, with quilted couches and pillows with the Crossfire logo.
Photo: Ben Dozer 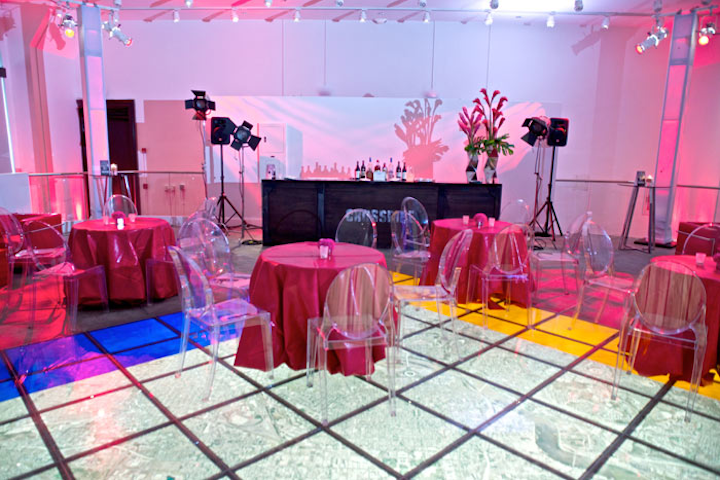 The Carnegie Library's L'Enfant Map Room incorporated the colors in the Crossfire logo, with lots of red.
Photo: Ben Dozer 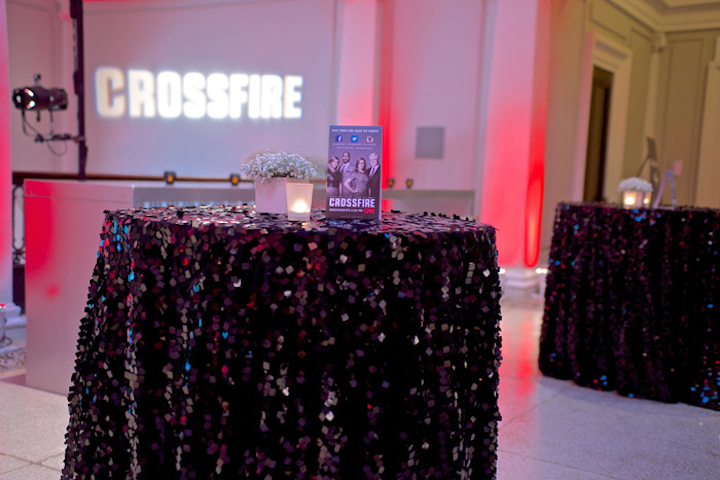