The Petersen Automotive Museum in Los Angeles reopened with a highly produced party inspired by automobile materials and the museum's unique architecture.

Automobile enthusiasts associate cars with style and elegance—and the Petersen Automotive Museum in Los Angeles hosted a gala intended to deepen and develop that connection. The December 6 gala celebrated the museum’s grand reopening, after a 15-month closure for gut renovation and construction.

The bash was so substantial that it took three weeks for producer RG Live Events to build it out. Museum director Terry Karges oversaw the production.

The gala took its cues from a variety of elements related to the structure and its contents. First, it drew inspiration from the building’s unique architecture, which includes an unmissable art-like metal ribbon facade. It also borrowed ideas from automotive structures, textures, traditions, and history.

“I was inspired by the fluidity of building’s facade, and wanted to bring the excitement of the exterior into the event space we constructed for the gala,” said Diana Rayzman, who led the RG team. To that end, RG partnered Stereobot to create four 180-foot-long curved ceiling structures.

Additionally, the event used materials that mimicked elements of automobiles—such as mirrors, chrome, and glass.

Guests entered the event through a clear-top tent, filled with chrome decor, mirrored tabletops, and live entertainment. The 82- by 196-foot structure was installed on the third level of the museum’s parking structure. The entrance to the tent included glass-front panels and three sets of glass doors. Seating including modern chrome dining chairs and mirrored tables provided by Revelry Event Designers. Floral Art designed modern tabletop florals that incorporated round spheres and streamlined boxes, a nod to car design.

RG Live Events also presented a visual interpretation of automotive history through live entertainment and projection. The grand finale was an interactive dance performance incorporating 3-D imagery of the birth of the new museum. 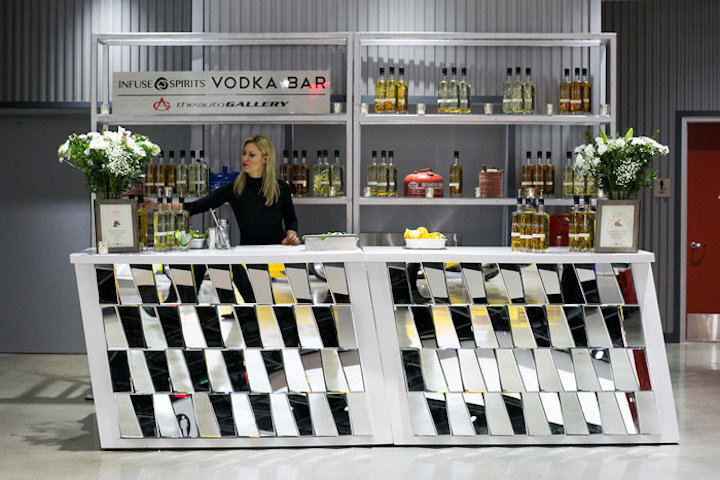 A tilted bar suggested speed, while the mirrored front nodded to auto bodies and looked like a checkered flag.
Photo: Scott Clark 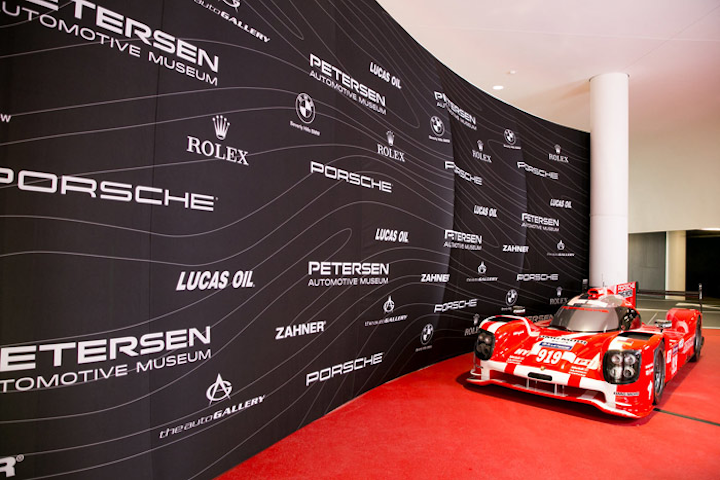 The step-and-repeat wall at the entrance to the gala had a look that mirrored the look of the museum with a curving wall that also suggested motion.
Photo: Scott Clark 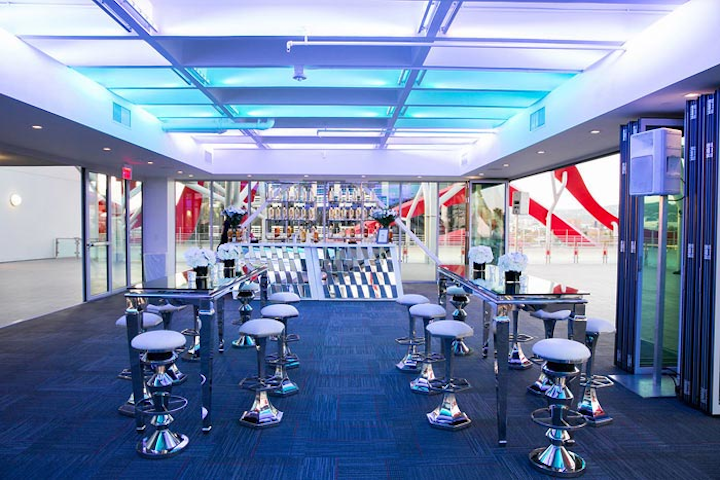 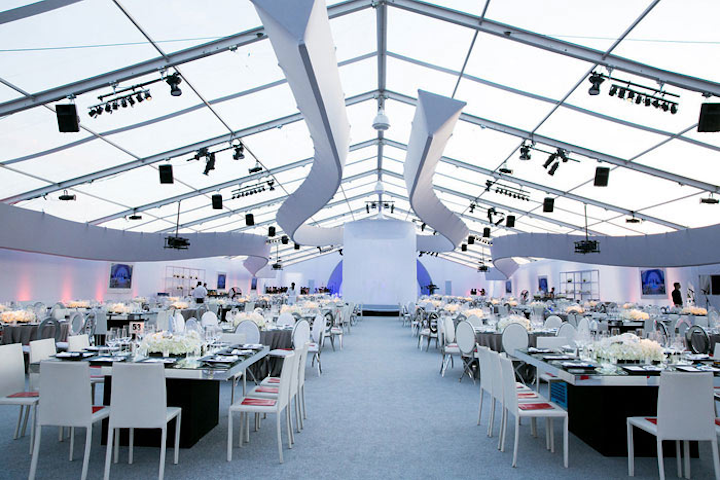 The production team installed a 82- by 196-foot clear-top tent structure on the third level of the museum’s parking structure.
Photo: Scott Clark 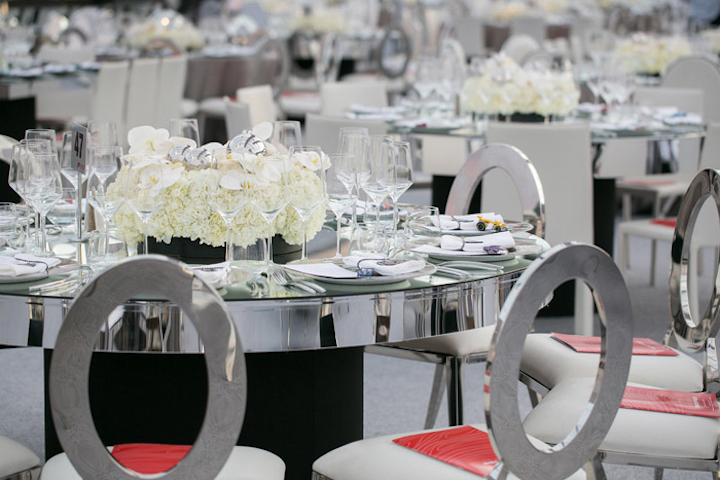 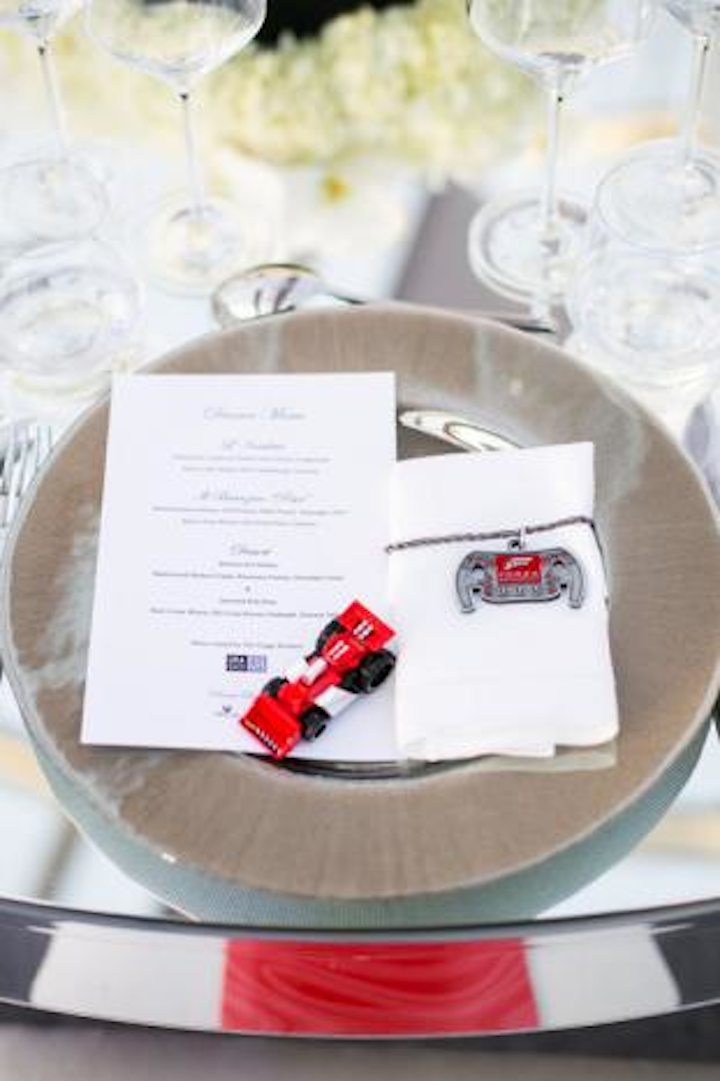 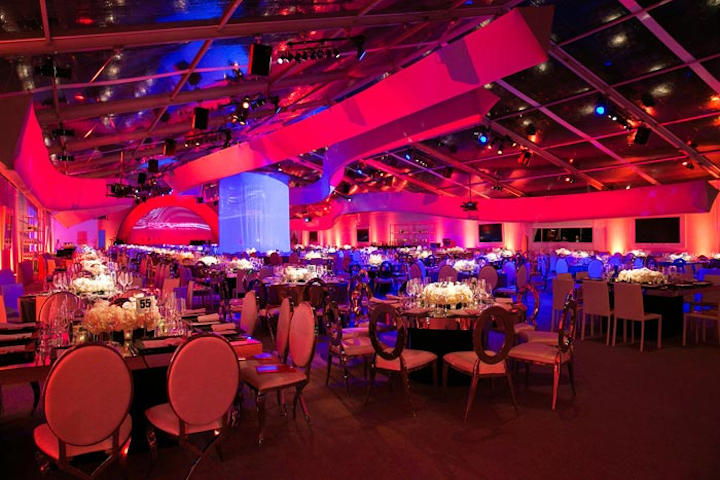 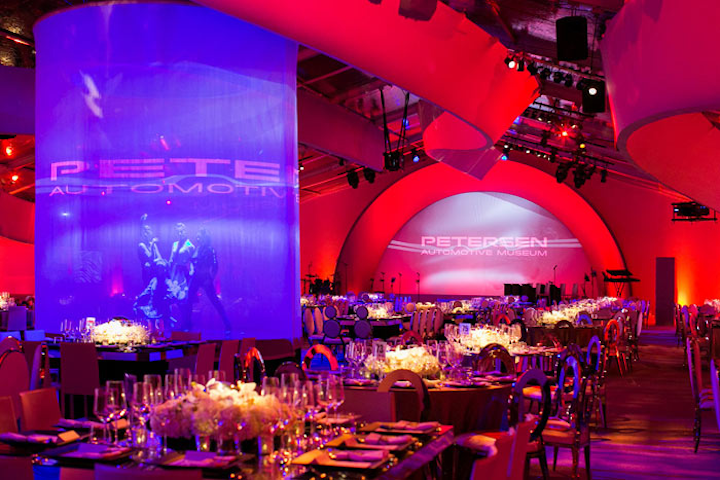 The circular center stage was surrounded by a floor-to-ceiling translucent scrim that allowed for 3-D projection mapping.
Photo: Scott Clark 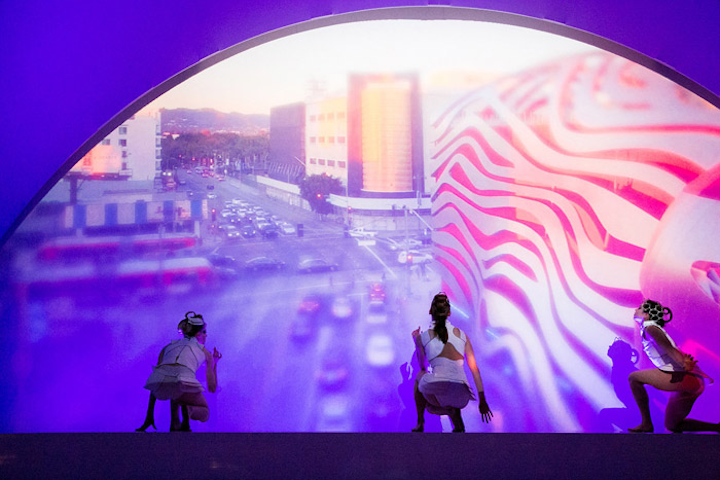 Entertainers interacted with projections that showed scenes of the revamped museum's architecture, referenced in decor throughout the party space.
Photo: Scott Clark 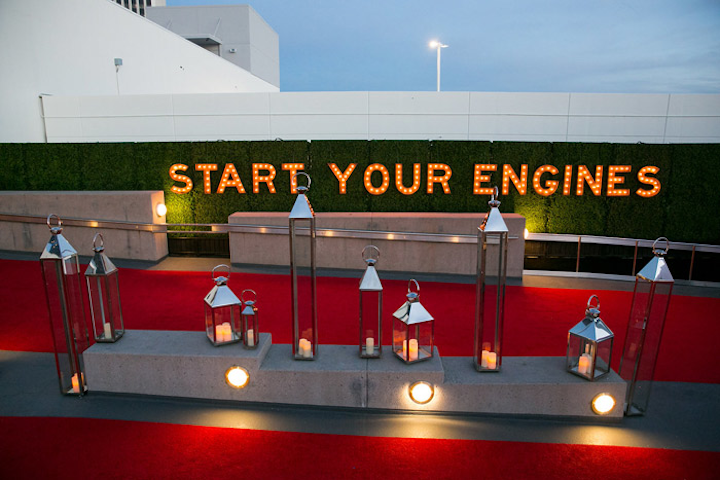 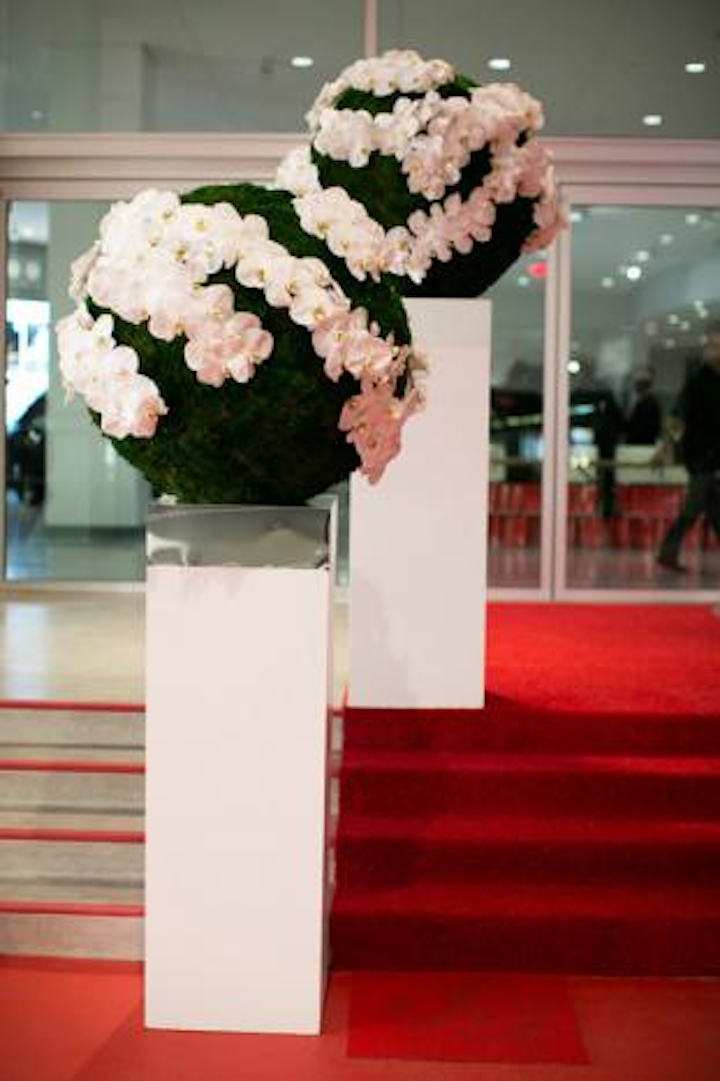 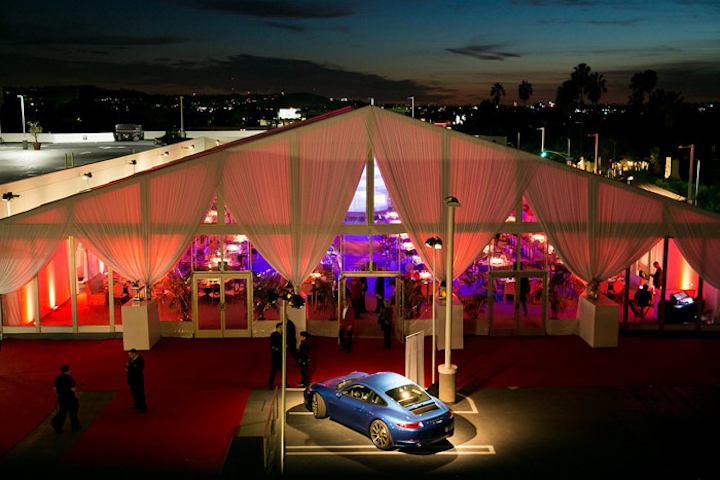 Presenting sponsor Porsche, as well as Maserati, BMW Beverly Hills, and Hyundai, were among the roster of event sponsors. A vehicle from Porsche stood sentry outside the dinner tent, bathed in focused light reminiscent of an elegant auto show display.
Photo: Scott Clark 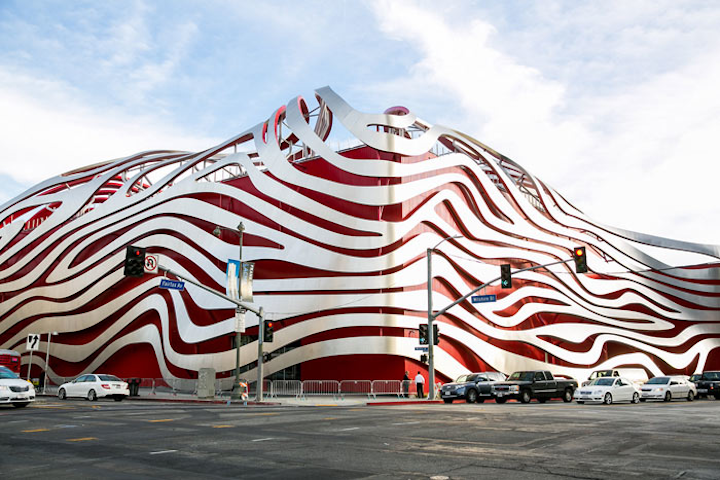 The ribbon-like exterior of the revamped museum inspired many facets of its grand re-opening gala.
Photo: Scott Clark
More in Event Design