The Summer Party for Friends of the High Line was underwritten by Coach, with on-theme brand integration.

Held amidst the elevated rail tracks and passageways adorned in lush green foliage, the Friends of the High Line danced in the summer season at the annual Summer Party. Underwritten by Coach, the June 22 fete beautifully rendered an urban jungle nestled within the confines of a concrete jungle.

Some 1,000 guests arrived at the elevated park, of which 10,000 square feet was transformed into a virtual rainforest-cum-carnival, complete with larger-than-life dinosaur topiaries, flower crown-making stands, photo booths where Coach sunglasses were offered as props, catering by Bite, and snow cone and popsicle stands.

Workshop transformed nearly every visible surface of the High Line’s covered passageway into a living, breathing edifice. “In general, the event has grown in size and become more design-heavy with each year,” van Wyck said. The first two years the design inspiration was a carnival, followed by a more nightclub-inspired setting. Then for two years it was truly a garden party. This year saw that design concept grow even further to the urban jungle.

“The goal was to continue the feeling of the High Line through the passageway—which we achieved through bringing in the raw metal scaffolding and lush wild greenery,” said van Wyck. “We very much wanted to celebrate the location as an urban park and highlight those elements: both the rugged and beautiful.”

To do so, Workshop brought in potted grasses, in keeping with the High Line’s existing foliage, to help fill in key spaces, the goal of which was to create a more lush atmosphere.

The High Line’s usually-vacant passageway allowed Workshop to take full advantage of the space. “It’s a large space, so we used the scaffolding to break it up and create separate moments,” said van Wyck, who filled the space from floor to ceiling with asparagus fern, plumosa, lily grass, bear grass, clematis vine, ruscus, spring rye, ivy, wisteria, clematis vine, and wild bush roses. “The scaffolding was placed intermittently to create nooks, hallways, and quieter moments.” Seating on the scaffolding came in the form of leather cushions—just one of a few nods toward Coach’s 75th anniversary as a leather goods maker. “We really wanted to celebrate the essence of Coach, and leather is such an important element of their business,” noted van Wyck.

Design planning began in September. Load in for the actual event was 10 p.m. the night before, and the team worked through until 7 p.m. on the day of the event. This year, for the first time, Workshop craned the scaffolding up onto the 14th street entrance instead of using the stairs. The strike began at 10 p.m. that night and wrapped at 4 a.m.

According to van Wyck, who’s been working with the High Line since its inception and serves on its board of directors, the team is incredibly familiar with the space and how to approach it from an event perspective. Translation: Zero unforeseen challenges arose. “We know the ins and outs and every year it gets more efficient,” said van Wyck.

Following the larger bash, a more intimate group gathered for a Chicago-style deep-dish pizza dinner hosted by Coach creative director Stuart Vevers at nearby Emmett’s in the West Village. 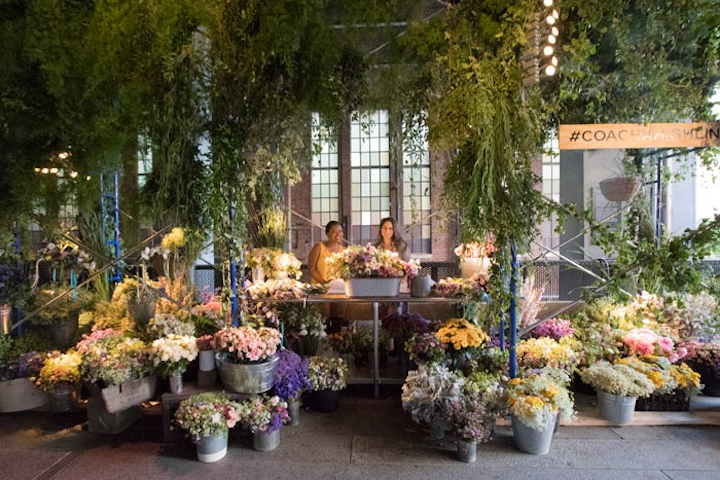 A dedicated area underneath the passageway housed a flower crown tableau. Hundreds of crowns were pre-made for guests, each affixed with a thin strip of leather in a nod to Coach's roots. Among the florals brought in: spray roses, wax flower, chamilia, button mums, lisianthus, scabiosa, jasmine, and clematis. Toward the end of the evening, guests were able to create bouquets to take home.
Photo: Kevin Tachman 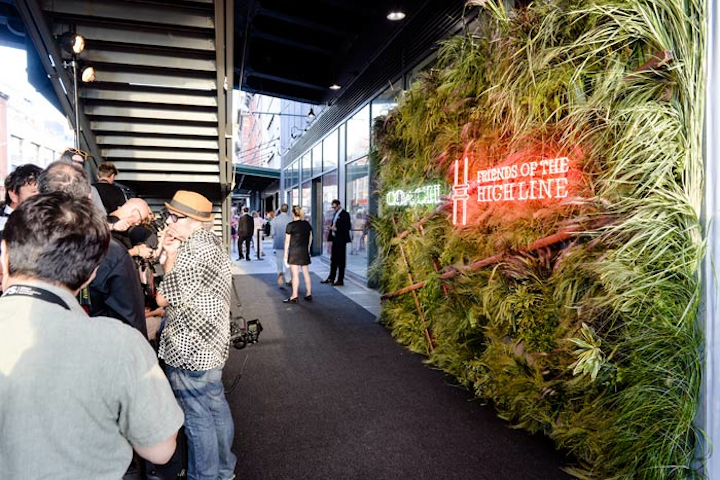 In keeping with the urban jungle theme, the step-and-repeat, located at the base of 14th Street and Tenth Avenue, featured neon signage atop a mixture of explosion grass, cattail grass, lily grass, bear grass, and millet. "Last year the whole step-and-repeat was clad in leather," noted Workshop  principal Bronson van Wyck. "This year was more about the small details."
Photo: Joe Schildhorn /BFA.com

A total of four dinosaur topiaries were peppered throughout the event as a playful nod to Coach's dino mascot Rexy. They ranged in height from five to nine feet tall. Not only were they event centerpieces, they also served as ideal selfie photo spots.
Photo: Kevin Tachman 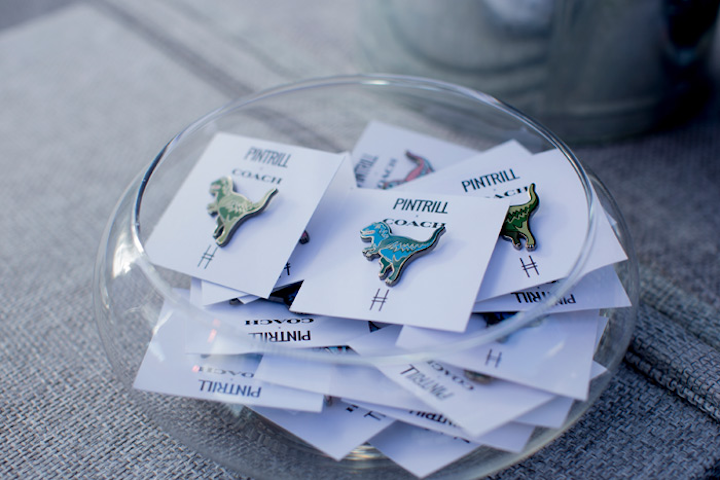 Custom Rexy dinosaur pins inspired by the Coach mascot were created by online pin shop Pintrill as a gift for guests. Bowls of pins in different color combinations sat at the bars for guests to select at their leisure.
Photo: Kevin Tachman 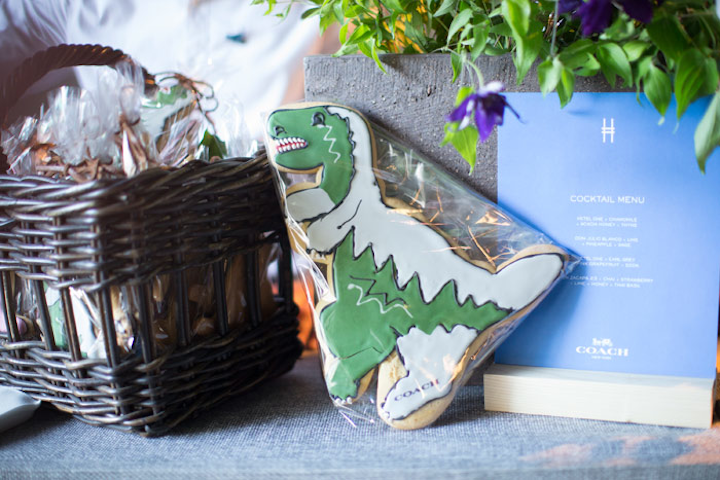 Another nod to Coach's Rexy dinosaur mascot came in the form of baskets of cookies of varying sizes. Each cookie was wrapped in cellophane and tied with a thin strip of leather.
Photo: Kevin Tachman 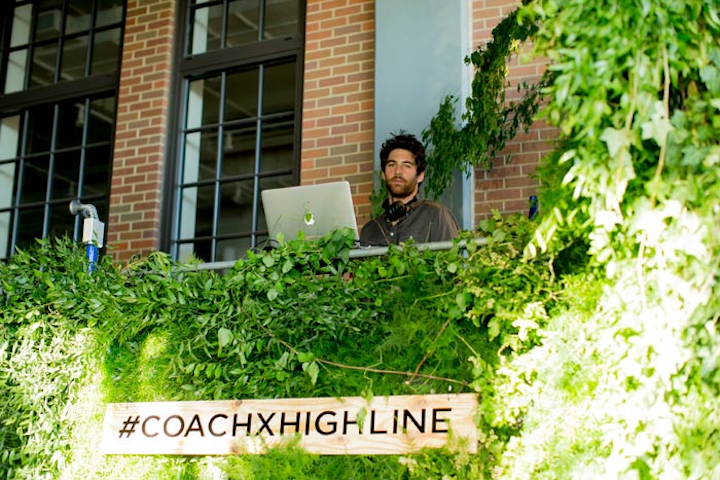 The event's two DJs were positioned on an elevated platform inside the High Line passageway on scaffolding shrouded by greens ranging from asparagus fern and bear grass to wisteria and spring rye.
Photo: Kevin Tachman 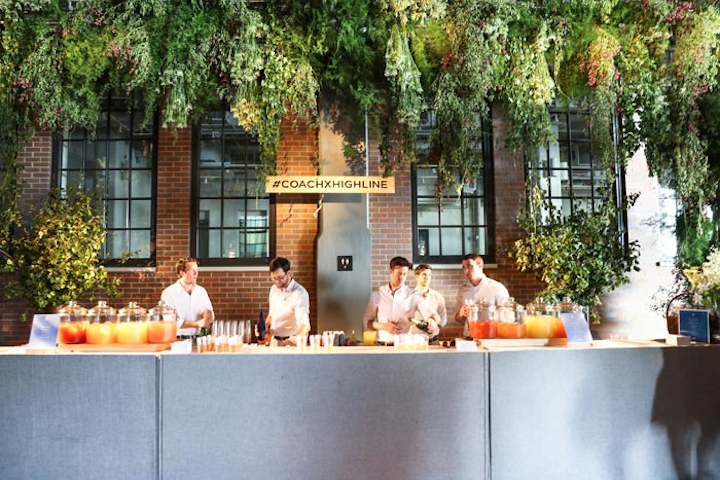 To use the long, and otherwise empty, stretches of space underneath the High Line passageway, Workshop erected a long bar along the brick facade. Tequila- and vodka-infused drinks bore nature-inspired names: Meadow, Mountain, Garden, and Beach.
Photo: Neil Rasmus/BFA.com 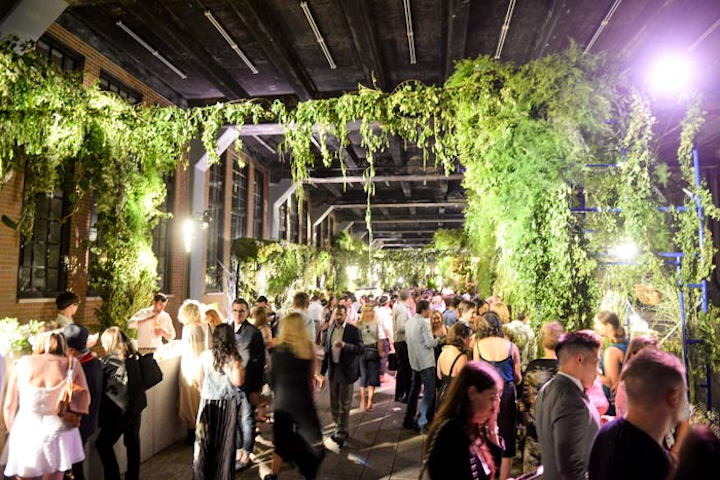 "The goal was to continue the feeling of the High Line through the passageway—which we achieved through bringing in the raw metal scaffolding and lush wild greenery," said van Wyck. "We very much wanted to celebrate the location as an urban park and highlight those elements—both the rugged and beautiful."
Photo: Joe Schildhorn /BFA.com 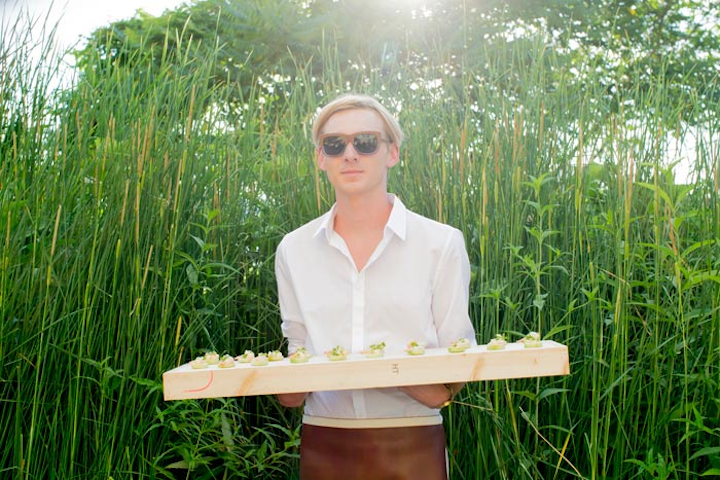 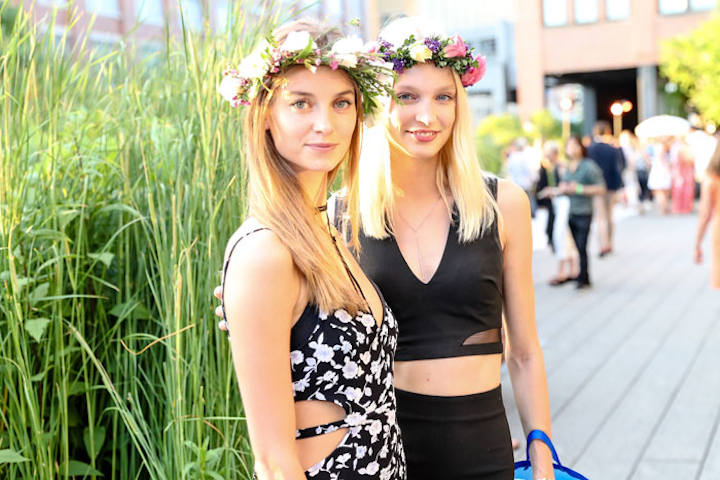 Mother Nature cooperated with the sunset party—the High Line's sixth such Summer Party. Rain tents were on hold as a contingency, but were not used.
Photo: Neil Rasmus/BFA.com 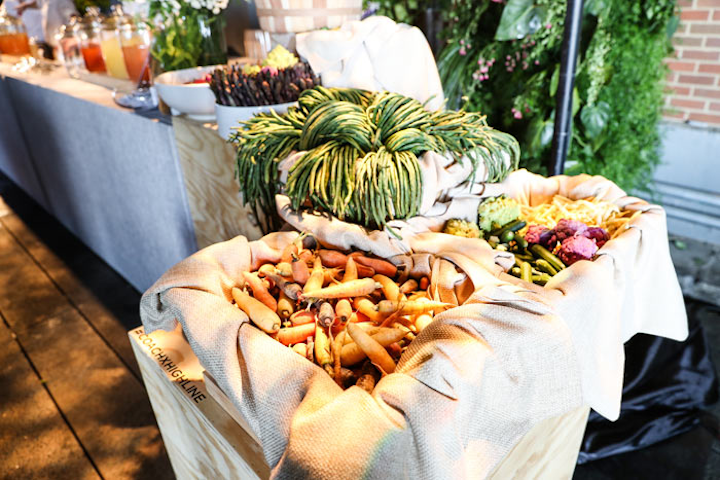