14 Psychedelic Ideas From a Summer of Love-Theme Benefit

An event theme based on the Summer of Love isn’t a new concept, which is why for the latest iteration of the InterContinental Miami Make-A-Wish Ball, creative director Maxwell Blandford wanted to put an original spin on the theme by drawing inspiration from personal experiences.

The 24th annual benefit, which took place November 3, welcomed more than 800 guests to the hotel, which had its lobby, mezzanine, and grand ballroom transformed to immerse guests into a number of psychedelic atmospheres taking inspiration from 1967.

“We just passed the 50th anniversary of Summer of Love. It’s a represented feeling that’s happening in fashion right now,” said Blandford, who has served as the ball’s creative director for the past 14 years. “It seemed to be a really relevant theme.”

For each event atmosphere, Blandford worked with Deco Productions to produce design elements and presentations inspired by personal experiences. For example, a white entrance area was based on an all-white sit-in of hippies Blandford said he encountered in a park in 1967. Decor included white paper cutout flowers, while a white check-in tent featured gold peace signs.

The cocktail reception offered contemporary takes on the late 1960s, with a bar inspired by Burning Man, psychedelic butterflies, a video design by Mauricio Ferrazza (which was inspired by children’s animations from the '60s), and an astrology-theme area with blue and gold moons and gold suns, based on a children’s day parade Blandford attended.

“My goal was to translate a reimagined feeling of the Summer of Love, when everybody has their own version of what that would be,” said Blandford. “And I wanted to make sure it remained in line with what [my team and I] storyboarded at the very beginning [of planning].”

The musical performances also added to the event theme. Rock band Chicago performed, as well as The Voice winner Alisan Porter. Couple Shareef Malnik—the chairman of the board emeritus of Make-A-Wish Southern Florida—and event emcee and actress Gabrielle Anwar dressed as Sonny and Cher, respectively, for a rendition of “I Got You Babe” during the dinner portion of the ball.

The event ended with the 11th annual InterContinental Miami Make-A-Wish Nightclub, presented by E11even Miami, which featured a house party-theme runway show from Saks Fifth Avenue at Brickell City Centre and a performance by Wyclef Jean.

Here's a look at some event design and entertainment highlights from the ball. 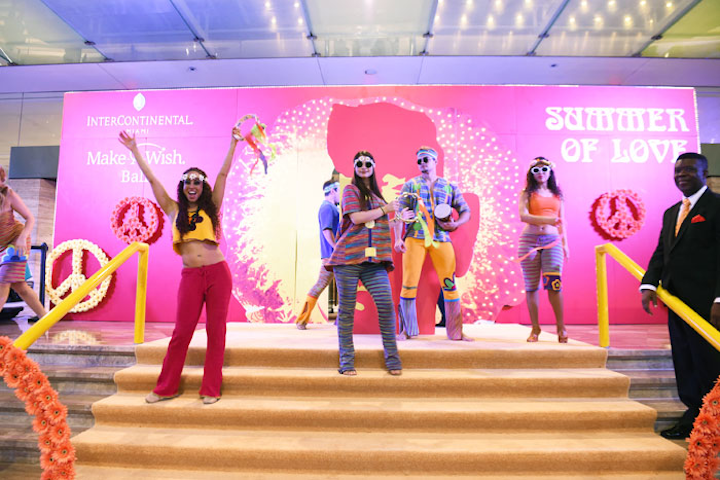 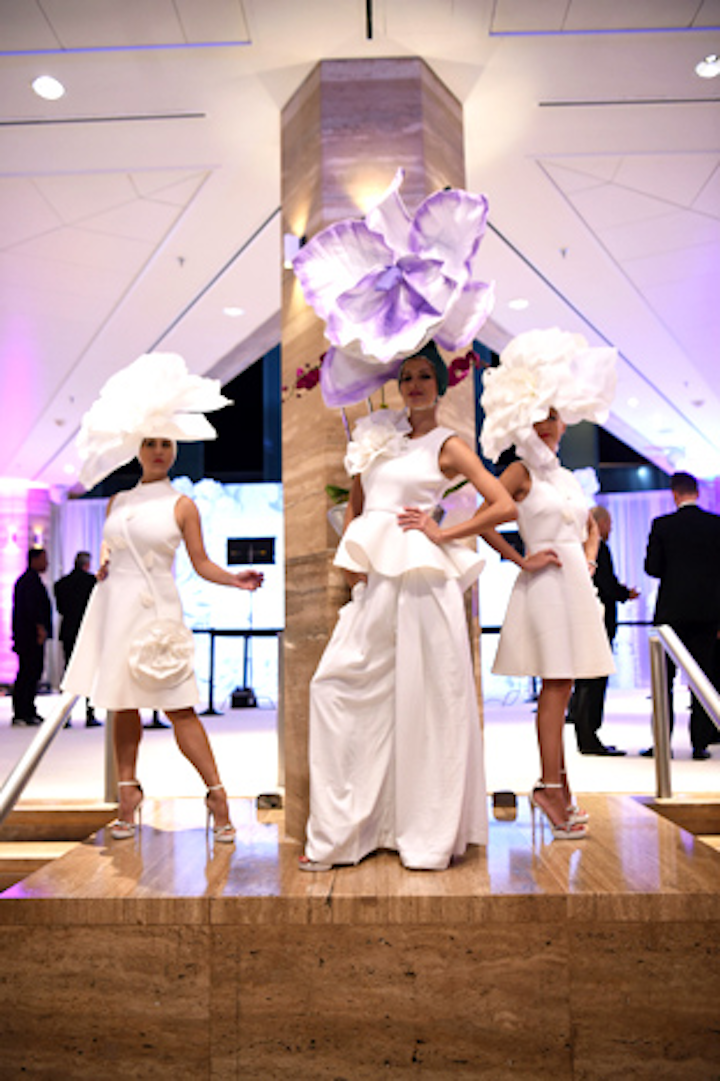 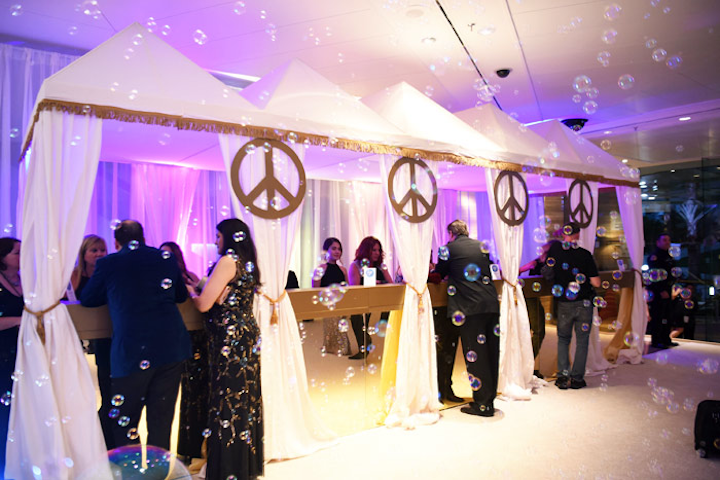 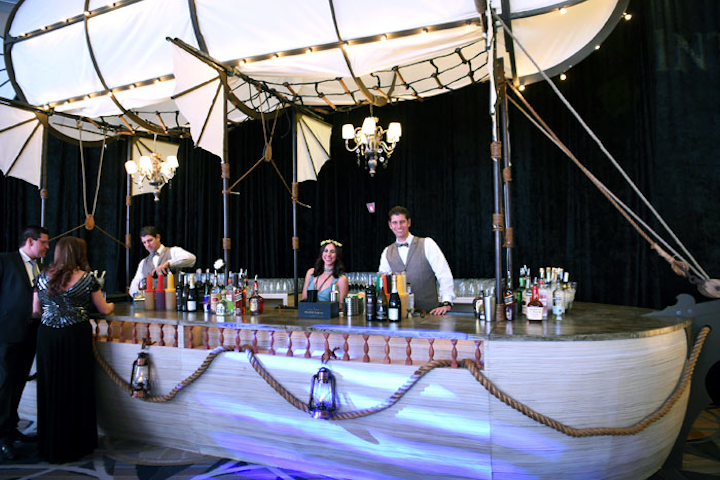 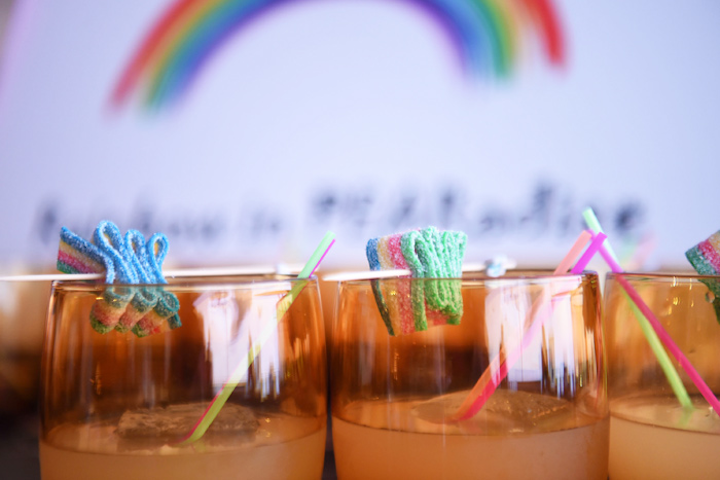 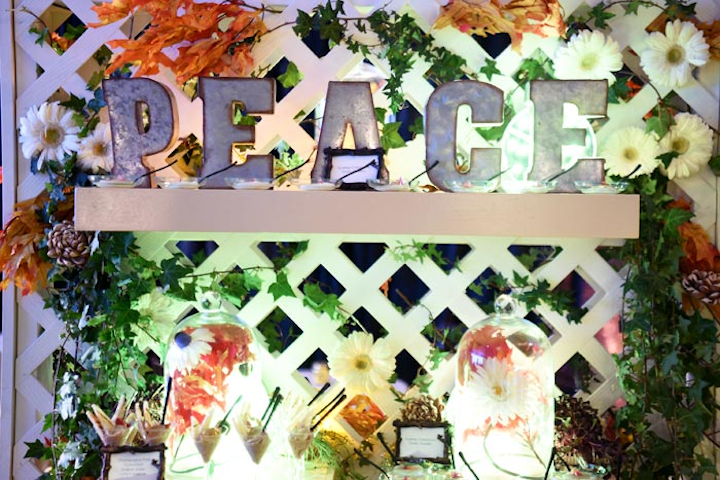 One catering station was decorated with a variety of flowers and greenery, along with industrial-style letters that spelled “peace.”
Photo: World Red Eye 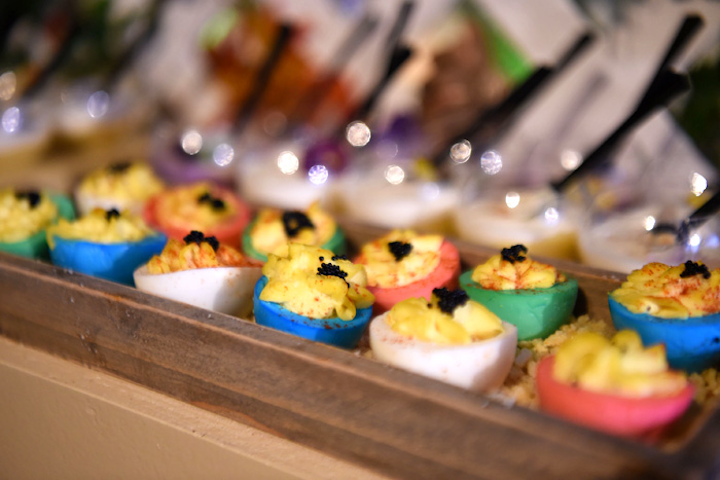 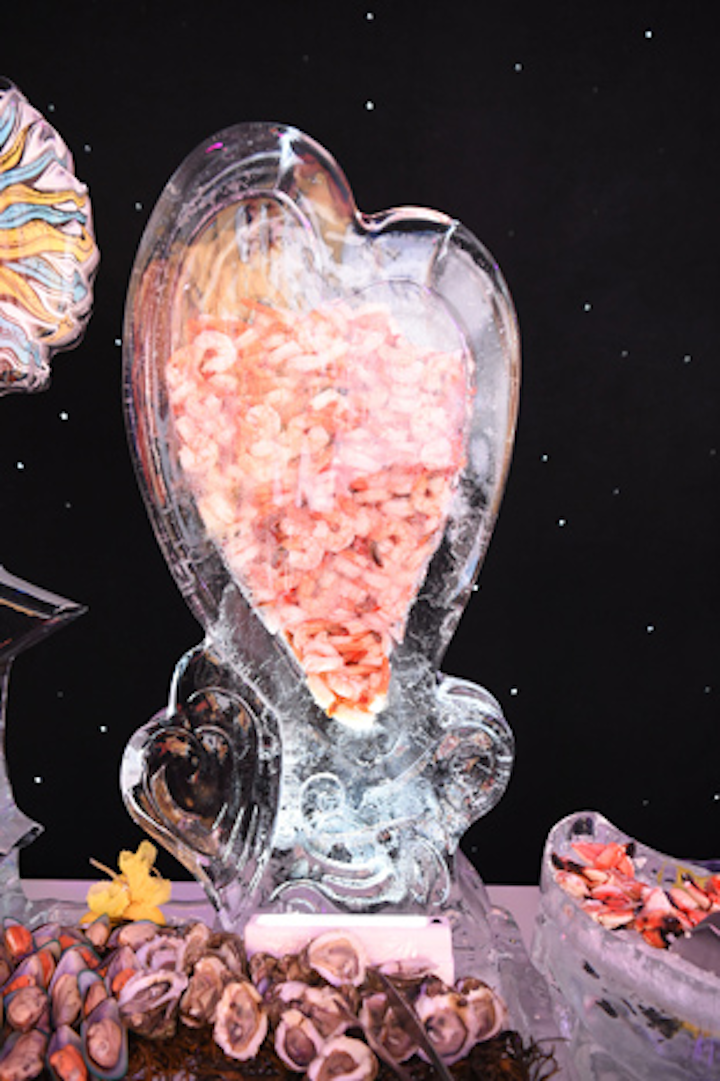 The cocktail reception featured a number of ice sculptures, including a heart filled with shrimp.
Photo: World Red Eye 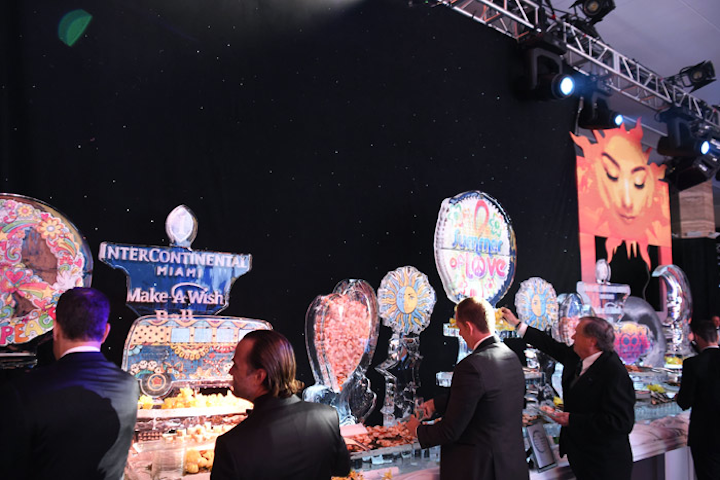 Other ice sculptures displayed on-theme illustrations and the name of the event.
Photo: World Red Eye 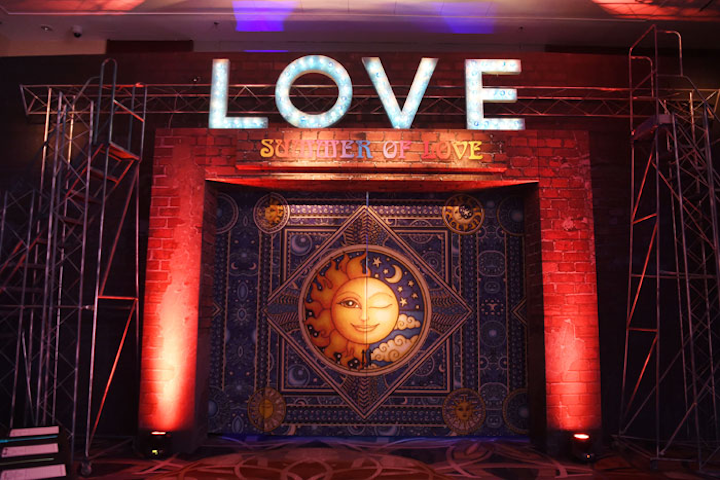 An astrology-theme doorway displayed a gold sun and moon against a blue backdrop, based on a children’s day parade Blandford attended. The word "love" was placed above the door in marquee letters.
Photo: World Red Eye 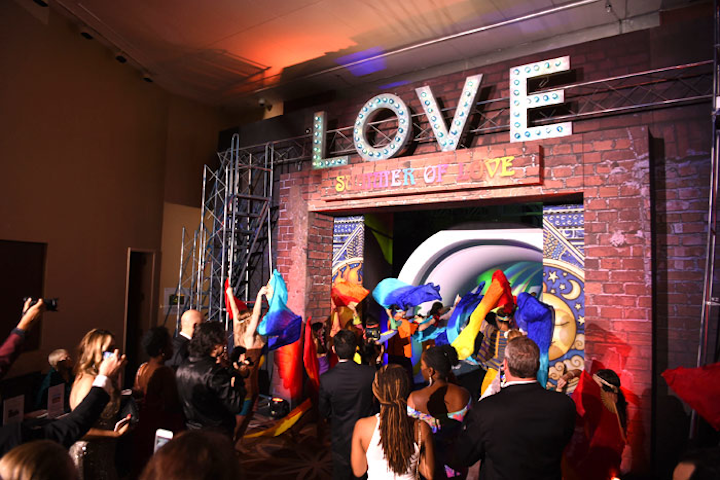 In what has become a tradition for the ball, guests were gathered and led into the hotel’s grand ballroom with an artistic performance. This year, a group of dancers waving colorful streamers ushered in guests to the song “Age of Aquarius," from the 1967 musical Hair. The door opened to a tunnel of psychedelic colors, which led to the ballroom for the dinner portion of the event.
Photo: World Red Eye 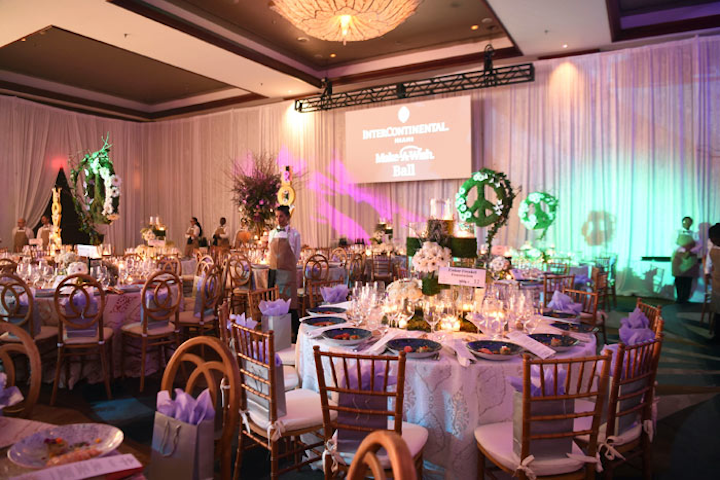 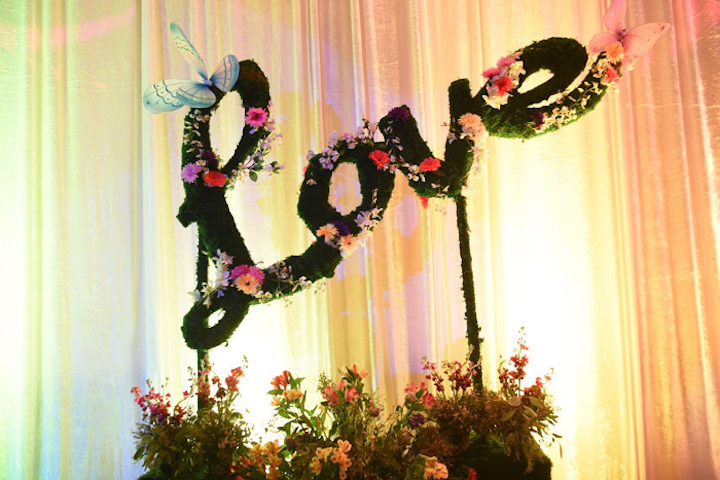 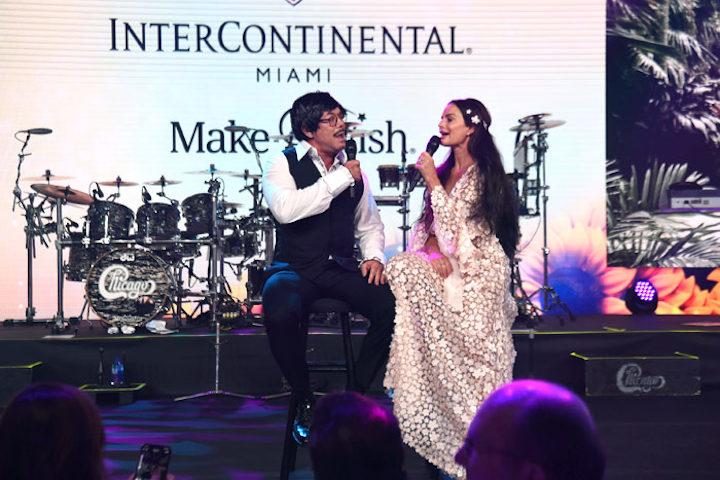 After welcoming the crowd, Shareef Malnik, chairman of the board emeritus of Make-A-Wish Southern Florida, and actress and event emcee Gabrielle Anwar performed “I Got You Babe,” dressed as Sonny and Cher.
Photo: World Red Eye
More in Event Design