The Metropolitan Museum of Art’s annual Costume Institute Benefit signifies not only the unofficial start of the charity circuit season in New York, but its steadfast date, the first Monday in May, has become a holiday of sorts. This year, the event celebrated all things holy, as inspired by the museum’s new exhibition, "Heavenly Bodies: Fashion and the Catholic Imagination."

The approximately 550 guests arrived on the red carpet—a hand-painted sisal carpet with white, gold, and burgundy trim—for cocktails in the Temple of Dendur and an inaugural viewing of the exhibition, which runs through October 8. It’s the largest Costume Institute exhibit the museum has ever staged, with priceless couture and archival church garbs that span 26 galleries at the main Met museum alone; more of the exhibition’s monastic examples are on display at the museum's Cloisters location in upper Manhattan.

Nowhere was this papal influence on the gala more striking—and awe-inspiring—than in the museum’s Great Hall. Assembled off site, a 30-foot-high replica of a papal tiara, made from gold and off-white roses and adorned with faceted Plexiglas “jewels” resembling rubies, emeralds, and diamonds, was suspended from the ceiling above the information desk; the base of which was covered with red roses.

Raul Avila, who has produced the benefit’s decor since 2007, returned to oversee all design aspects. Film director Baz Luhrmann served as creative consultant, with Rob Ashford as performance consultant.

“Anna [Wintour] and I, from the beginning, were on the same page with replicating the papal tiara for the Great Hall floral centerpiece,” Avila said. “The tiara is the most striking component of the Pope’s ensemble, and I felt it was appropriate to highlight that given the theme of the exhibition.” Avila added that he wanted to depict a religious garment “but of course, religion often being a sensitive subject, did not want to do so in an offensive way.”

After viewing the exhibition, which spans a massive 58,000 square feet and includes 40 ecclesiastical garments from the Sistine Chapel Sacristy (the largest loan to the museum since the 1983 exhibit “The Vatican Collections”), guests proceeded to the Petrie Court for dinner—a first for the benefit. “It takes an army to move so many guests through the galleries,” said Avila. “The process was helped along by musical and vocal cues.”

As for the setting, “We were inspired by 19th-century monastery dining style for the dinner decor,” said Avila. The space featured large wooden tables without linens, custom-made oak monastery chairs upholstered in deep red velvet, and pewter charger plates. The tabletop arrangements were inspired by the paintings of Caravaggio, overflowing with an assortment of florals and fruit.

The evening’s menu, catered for the first time by Olivier Cheng (Glorious Foods had catered previous years), featured Roman cuisine prepared by executive chef Jenny Glasgow. It included an appetizer of lobster with wild herbs, a lemon-acacia honey emulsion, saffron radishes, and gold flakes; entrees of branzino with lemon-caper brown butter and baby lamb chops with fresh mint and almond pesto, and was accompanied by sides of saffron fregola with braised artichokes; squash blossoms stuffed with ricotta fresca, pinoli, and lemon; and haricots verts in a citrus balsamic with edible flowers.

Instead of a heavy dessert course, Cheng served a confectionery buffet in the museum’s Great Hall, which included gold-dusted truffles and chocolate-dipped cape gooseberries, along with espresso and an amaretto semifreddo “drumstick” cone with a golden pearl on top.

For the first time, the event imposed an age restriction, which was apparently in response to past years’ well-documented restroom high jinks that ruffled the feathers of some deep-pocketed museum board members and donors. The results: not one bathroom selfie was posted to any social media channels.

In lieu of previous years' handful of sponsors, the 2018 benefit was chiefly made possible by Christine and Stephen A. Schwarzman and Versace, the latter of which is minority owned by the former’s financial behemoth Blackstone Group. Additional support was provided by Condé Nast. 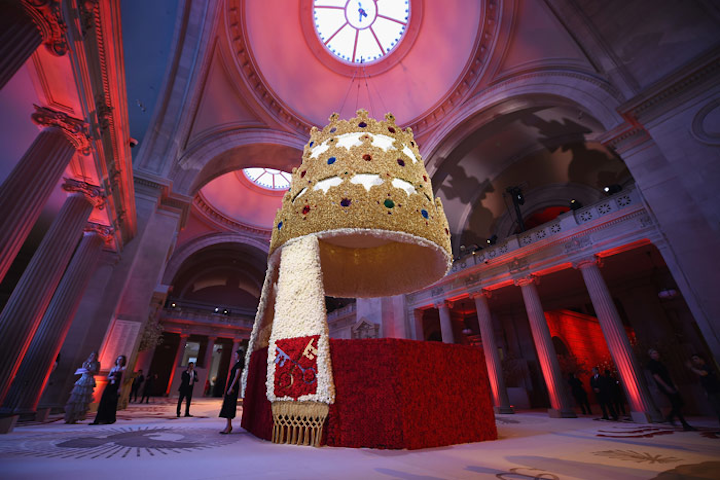 The crowning jewel of the evening's decor, the 30-foot-high floriated centerpiece created by gala designer Raul Avila and his army of staffers evoked the evening’s theme. The structure was inspired by a jeweled tiara, "the most striking component of the Pope's ensemble," said Avila, that once belonged to Pope Pius IX.
Photo: Dimitrios Kambouris/MG18/Getty Images for the Met Museum/Vogue 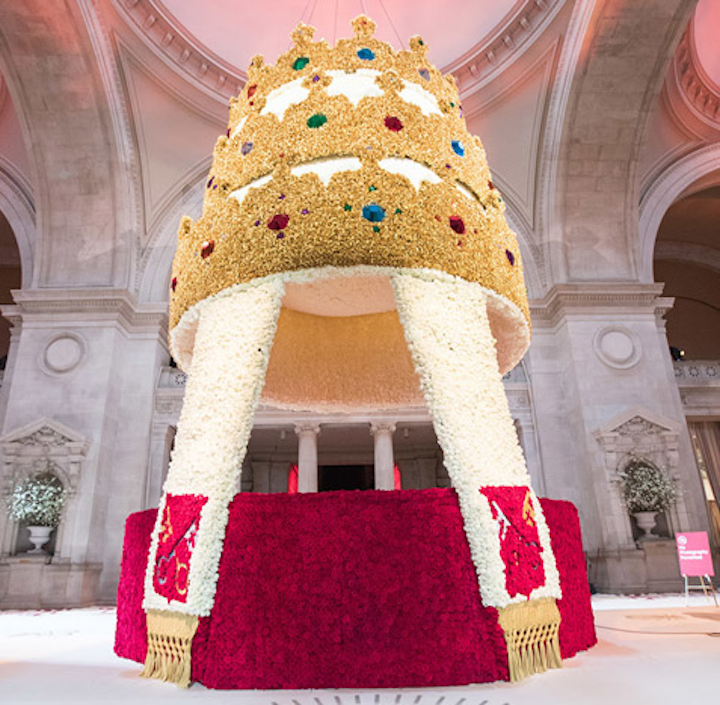 Made up of 80,000 roses, the soaring floral display echoed the papal headpiece's gilded metal work with roses in gold and off-white. The flowers at the top of the crown are faux silk blooms, which were used to reduce the total weight of the 4,000-pound structure. The triple-tiered tiara also boasted faceted Plexiglas "jewels" that resembled rubies, emeralds, and diamonds.
Photo: Getty Images 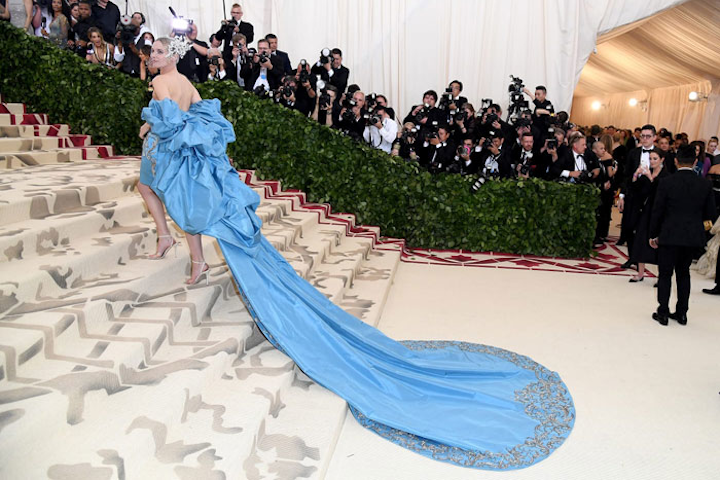 Sisal carpeting stenciled in white, gold, and burgundy extended from the arrival steps outside the Met into the Great Hall. It made for a dramatic complement to the red-carpet arrivals like Diane Kruger in her Prabal Gurung gown.
Photo: Getty Images 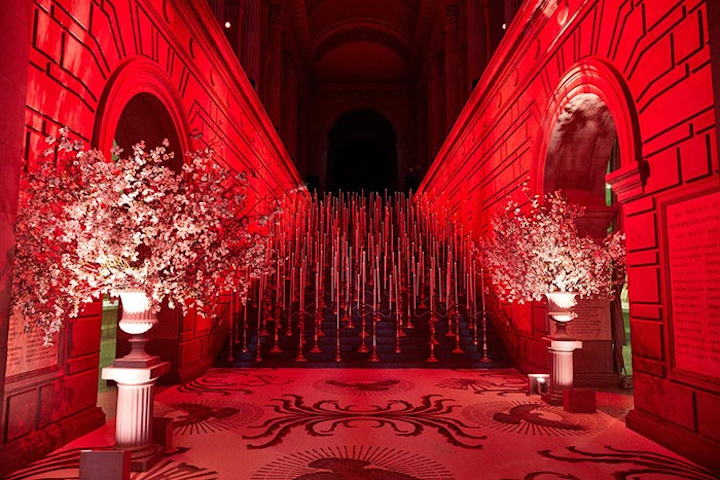 Large, antique-gold candelabras with 24- and 48-inch-tall candles fitted with battery-powered bulbs flickered on the Great Hall stairs; some 70 candlesticks in three-armed candelabras lined the steps. The ethereal setting served as the backdrop to this year's receiving line.
Photo: Getty Images 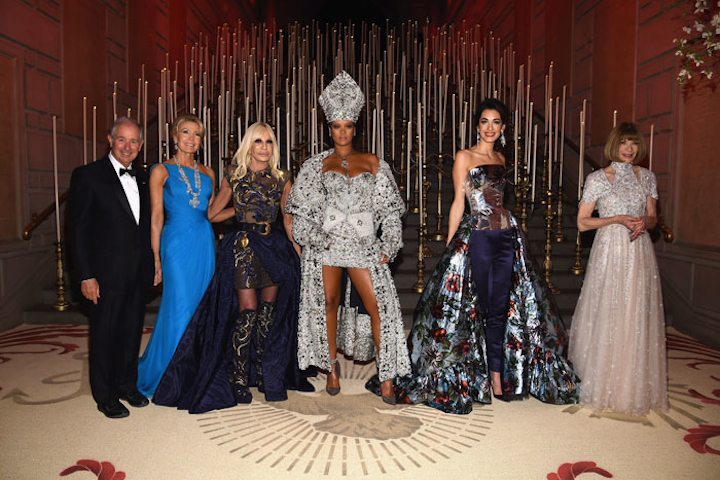 There, guests were greeted by Christine and Stephen A. Schwarzman, Donatella Versace, Rihanna, Amal Clooney, and Anna Wintour. This was the Vogue editor's 20th year as co-chair of the event.
Photo: Dimitrios Kambouris/MG18/Getty Images for The Met Museum/Vogue 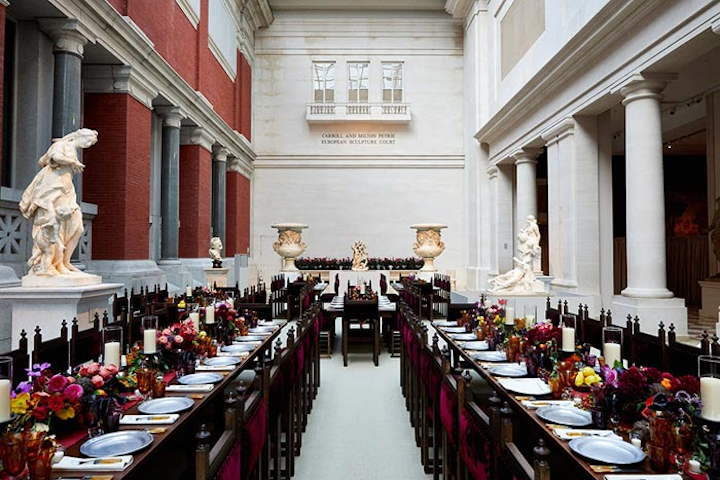 In the Petrie Court, wooden rectory tables with gold-tasseled burgundy velvet runners and matching wooden chairs upholstered in burgundy cushions with antique-gold studs comprised the foundation of the dining setup. Arrangements with large white dogwood branches dotted the room. "It was exciting to design the dinner in a fresh space," said Avila. "And the gallery was perfectly suited to the theme."
Photo: Getty Images 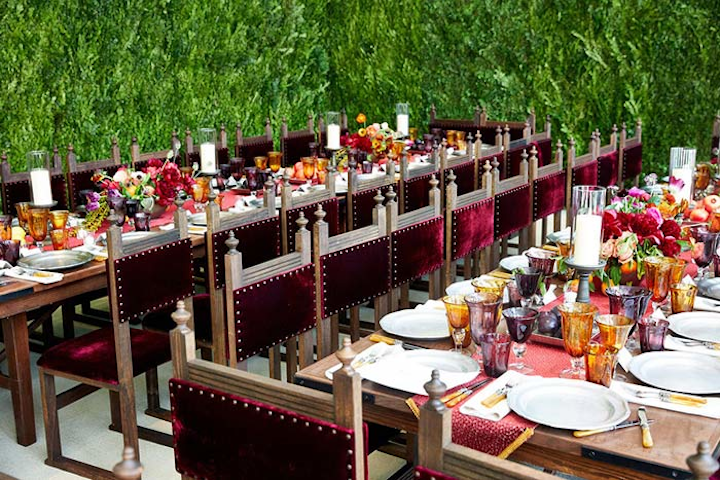 In lieu of linens, Avila decorated the surfaces with deeply hued flowers and fruit, all placed on a burgundy runner with gold tassels—a nod to the decadent feel of a last supper. The oak monastery chairs were custom made.
Photo: Getty Images 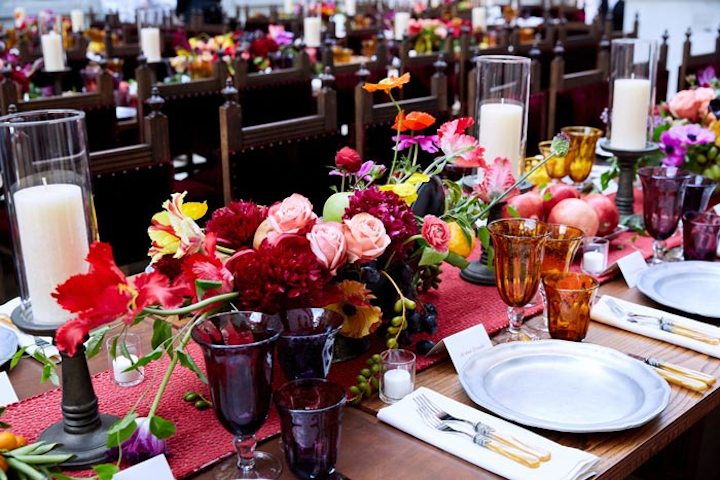 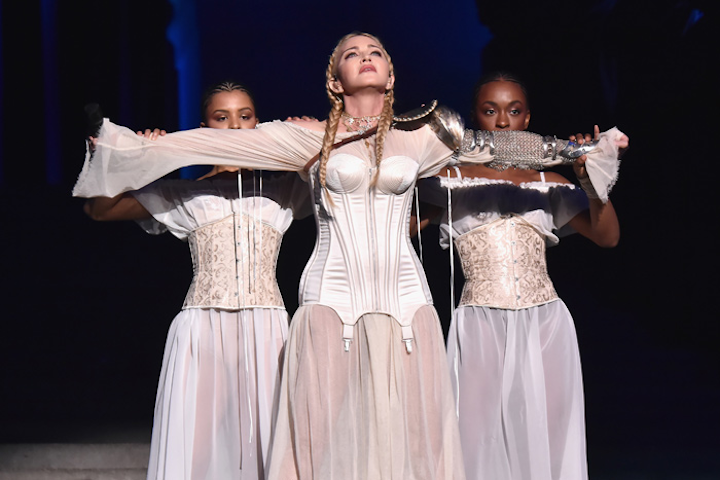 Following dinner, Madonna, initially wearing a monastic cloak, descended the stairs of the Great Hall and made her grand entrance on the stage to the tolls of church bells. Fittingly, she opened her set with "Like a Prayer" and segued into "Hallelujah" as she walked through the crowd.
Photo: Kevin Mazur/MG18/Getty Images for The Met Museum/Vogue
More in Floral