Mark's Garden designer Michael Uncapher—who has handled floral design at the Oscars, Golden Globes, Grammys, and more—takes us behind the scenes. 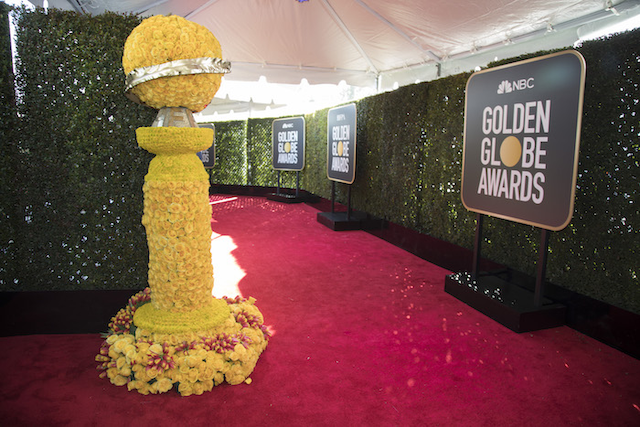 For this year's Golden Globes red carpet, Mark's Garden created a seven-foot-tall statue constructed from yellow flowers. Photo: Courtesy of the Hollywood Foreign Press AssociationLOS ANGELES—Sherman Oaks, California-based florist Mark’s Garden has been handling floral design for high-profile Hollywood events for decades, including the Academy Awards Governors Ball for the last 26 years. The design studio (which doubles as a retail shop) has also created the flowers for the Golden Globes telecast for 10 years, as well as award-show after-parties for the likes of Netflix and Warner Brothers.

Recently, Mark’s Garden event designer Michael Uncapher got on the phone with BizBash to discuss all things award shows, including the arrangement styles and color schemes most appropriate for televised ceremonies, the logistics of designing for multiple events in one night, what’s on tap for this year’s Oscars parties, and more.

On what works for award show flowers
“The goal is to catch someone's eye but not take over the table,” says Uncapher. “The main focus is really the celebrities, and you want to make sure that you can see them—although of course, we're hoping people are talking about the flowers.”

Uncapher notes that the height of arrangements is also crucial, especially for seated, televised ceremonies such as the Golden Globes. “You don't want to make it seem as though guests are peeking over the top of it. You have to keep it lower than you would normally do,” he says. “It's kind of a perfect science—you don't want it to be too low but also not too tall, making tables look dwarfed.”

But, adds Uncapher, the strategy changes for after-parties, where arrangements can be a lot larger and more complex. “Clients are always trying to think about the Instagram picture, especially with celebrity attendees,” he explains. “Everyone is looking for that shot that they can post. So we always have a conversation right up front to figure out what we can do that hasn’t been done in the past, what would feel different than just a standard flower wall.”

Uncapher thinks that taking cues from the venue itself is a good place to start. "We designed this year's Clio Awards, which took place at the Ziegfeld [Ballroom] in New York," he says. "The venue has an Art Deco type of feel, so we tried to match florals to that style using things like pampas grass."

On color schemes
“You have to think about colors that will go with the variety of dresses and tuxedos,” says Uncapher. “A lot of award shows tend to like using red and gold, tying into the red carpet and statues and things like that. It does get challenging to create new designs using the same color palette all the time.”

For this year’s Golden Globes telecast, though, Uncapher says the Hollywood Foreign Press Association wanted to do something a bit different. “They wanted to do a cleaner aesthetic while still introducing the color, so we used a variety of tulip called Rambo, which is a type of parrot tulip. It's variegated in of itself, so it has stripes of red and stripes of yellowish gold color, which worked really well," he says. "It still maintained that clean aesthetic, but gave the variety of color, too.”

On the challenges of this year’s Golden Globes
The Globes have notoriously tight security, as the telecast and the evening’s biggest after-parties all take over various areas of the Beverly Hilton in Los Angeles. With Mark’s Garden designing florals for the telecast as well as two of the biggest after-parties, the team had to leave extra time for setup—while also avoiding the wandering cameras of the press line.

“There's so many different entertainment news outlets running around … you're trying to avoid getting in their shots, while also loading in a seven-foot-tall floral Golden Globe,” laughs Uncapher. “There’s a lot going on.”

Another big challenge of this year, in particular, was the rainy weekend—which complicated matters for the Netflix party, which was held immediately after the ceremony in a former parking lot outside the hotel.

“Netflix has done after-parties in the past, but this year they really wanted to step it up and do something a bit more extravagant,” explains Uncapher. “They took over a space which is nicknamed ‘the mud pit’—for good reason. Rain presents kind of a nightmare specifically in that area to load in because you're trying to get trucks down there and they get stuck in the mud. They try to lay gravel down, but it doesn't always work—and this year we had quite a bit of rain.”

The result of the headaches, though, was a series of large, tropical blooms that complemented the event’s vintage nightclub vibe. That same night, Mark’s Garden also designed arrangements for the InStyle and Warner Brothers party, which had a softer, more elegant look. Uncapher says that the company broke into teams, so each group focused on one or two events at once rather than tackling all three.

On the upcoming Oscars Governors Ball
Mark’s Garden will once again be working on the Academy Awards’ official after-party on February 24, and this year’s florals will be designed to complement the vintage cinema theme. Over 10,000 flowers will be shipped in from Holland, Thailand, South America, and Australia, and will evoke movie theater designs from the 1920s and 1930s.

“It’ll have that really lush, red velvet-type feel and opulent designs that these theaters used to have,” says Uncapher. “The Oscars were originally over at the Roosevelt Hotel, and then they moved over to the Chinese Theatre, which was a big inspiration for us: the lush velvet red seats, the gold moldings around the room.”

“The historic Los Angeles Theatre was also an inspiration,” he adds. “We’ll have custom chandelier-type crystals on the candles that will give the feel of chandeliers—without going too literal.”

The designs will call for red tulips, burgundy roses, mauve orchids, and dark purple calla lilies, with no two arrangements exactly the same. “Gold accents will really give it an opulent feel, too," adds Uncapher.

On his favorite recent floral trends
“Over-the-top designs are definitely still trending,” he says, noting that with an improved economy, people are becoming increasingly comfortable with more elaborate flowers and decor. “For a while, farm-to-table was really in, with smaller flowers. But I think clients are looking for a more grandiose feel again.”

Uncapher notes that last year’s Royal Wedding influenced in the floral industry as well. “[The wedding] used lots of textures and different varieties of greens—maybe not your traditional flowers like roses and hydrangea as the base,” he says. “It's more a variety of greens and wild flowers that are creating that look, and a very mixed feel that's very garden-y in that aesthetic.”

“Of course, there's the flip side of that, too: a bit cleaner, more sculptural and architectural with grouped flowers," adds Uncapher, citing the large Golden Globe statue made of flowers that the team created for this year's red carpet. "Those are all really popular, and real show-stoppers.”

Click through the slide show to see some of Mark's Garden's recent award-season work, and look for a preview of the Oscars Governors Ball on bizbash.com early next week. 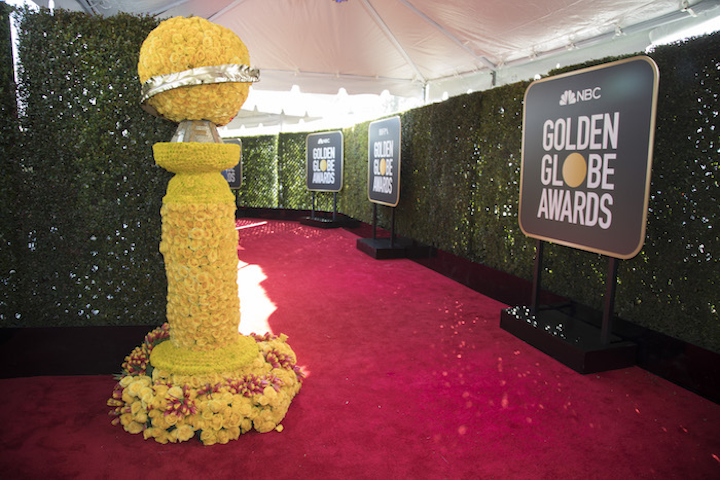 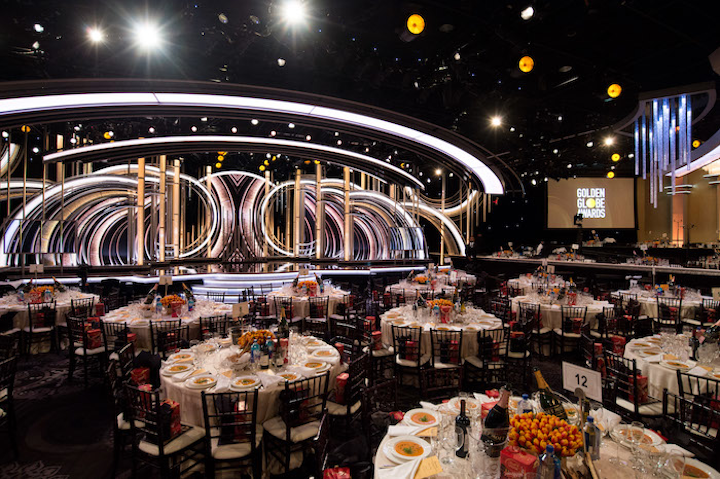 Mark's Garden has designed flowers for the Golden Globes telecast for the last 10 years. This year, the company used more than 15,000 vibrant Rambo tulips, flown in from Holland and displayed in textured gold vases that were inspired by the Golden Globe statuette.
Photo: Courtesy of the Hollywood Foreign Press Association 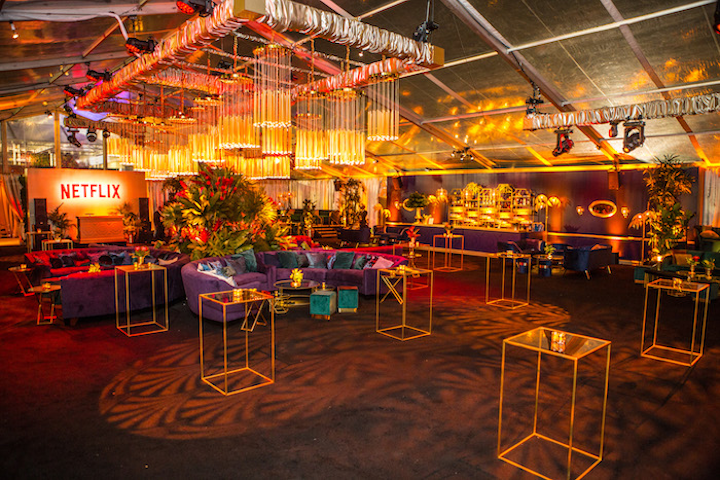 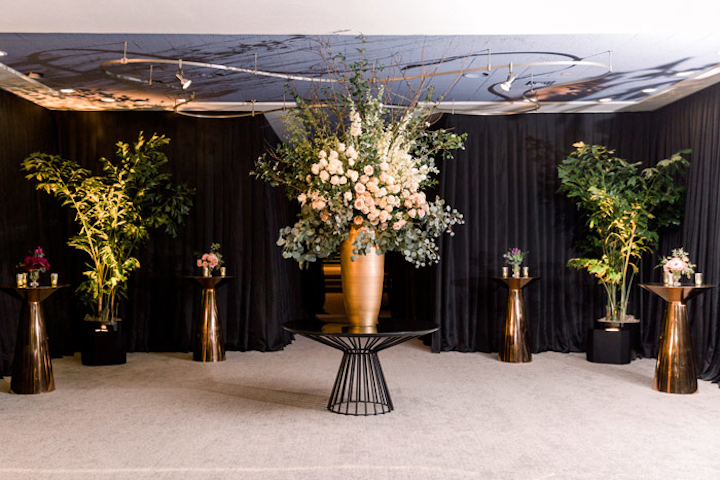 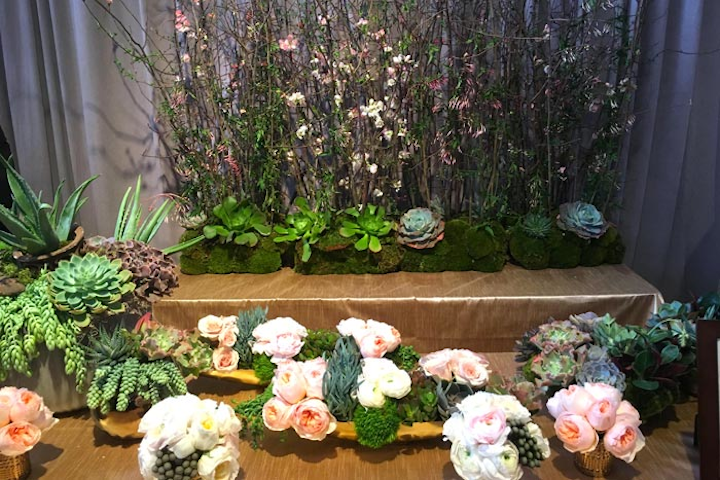 Mark's Garden has also been designing the official Academy Awards after-party for 26 years. In 2018, the design included 5,000 succulents mixed with roses and ranunculus arranged in gold, copper, and mirrored vases. The flowers were later planted at the Motion Picture Television Fund.
Photo: Claire Hoffman/BizBash 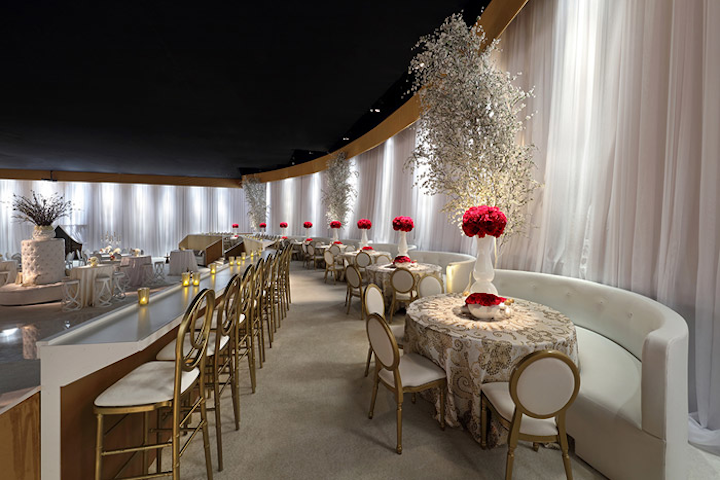 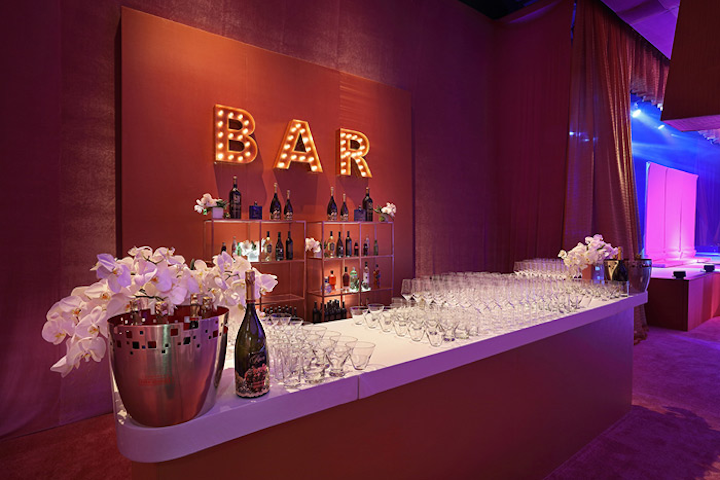 For the 2016 Governors Ball, the team designed highly stylized sculptures using white flowers like calla lilies, gardenias, ranunculus, phalaenopsis orchids, and succulents. Mark's Garden used about 10,000 blooms in total, flying them in from Holland, South America, and Mexico at the last minute for freshness.
Photo: Line 8 Photography. All rights reserved.
More in Floral