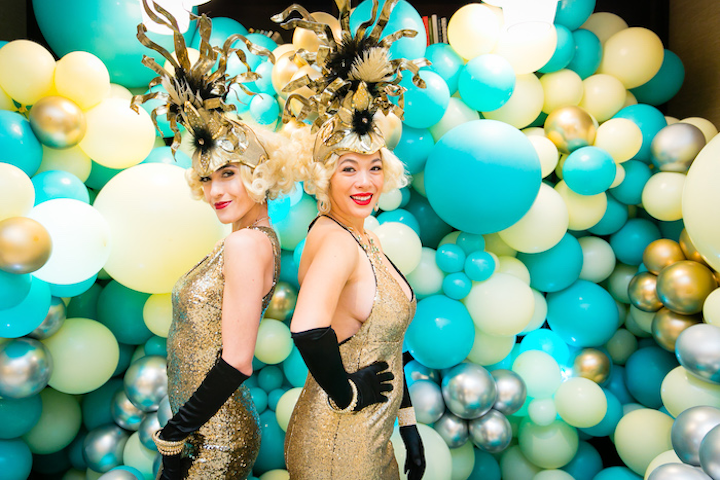 To celebrate the opening of the new Hyatt Place Pasadena on February 20, the hotel brand teamed up with Innovate Marketing Group to host an Instagram-friendly celebration. The lobby featured an organza balloon display, costumed greeters, and a floral hedge wall with the letters "HP." Other highlights included branded cake pops and a leather keychain monogramming station. The hotel has 189 rooms and three meeting spaces.
Photo: Albert Liu Photography

Moves & Milestones
Popular local eateries Bavel and Majordomo have both been named semifinalists for "Best New Restaurant" in the 29th annual James Beard Awards; winners will be announced on March 27.

The Los Angeles Tourism & Convention Board has unveiled a new look for its website. The mobile-first design has an expanded events calendar, interactive maps, and neighborhood guides created by local writers and photographers.

In Case You Missed It
We took a look inside the most glamorous Oscars parties, from the Academy's sparkling gold details to the Elton John AIDS Foundation's successful auction to Essence's art-focused Black Women in Hollywood luncheon. We also asked event pros around the country to grade the ceremony itself.

In other L.A. event news, we checked out Beverly Hills philanthropist Christine Chiu's lavish Chinese New Year party—which came complete with sponsorships from the likes of Piaget and Bottega Veneta.

In the News
Reporters got a sneak peek at Disney's upcoming Star Wars: Galaxy's Edge park, opening in Anaheim this summer and Orlando in the fall. The Hollywood Reporter: "The 14-acre themed destination at Disneyland ... will be unlike any attraction before experienced. With two state-of-the-art rides (Star Wars: Rise of the Resistance and Millennium Falcon: Smugglers Run), a plethora of shops and restaurants (all in the theme of Star Wars so as not to feel like they are part of a Disney stop), jaw-dropping spectacles, and full-scale droids milling about, the land delivers on the ambitious project Disney C.E.O. Bob Iger foretold of when he announced the park at the D23 Expo in August 2015." https://bit.ly/2IFXY7H

The L.A. Planning Commission has announced support for the Fig, a proposed complex on a 4.4 acre site across from Exposition Park. Los Angeles Times: "The planned project will include nearly 300 hotel rooms, more than 200 units of student housing, and nearly 200 more apartments for other residents—including 82 units set aside for households with limited incomes, according to city reports." https://lat.ms/2Swy4D5

Mayor Eric Garcetti's office has called an outdoor mural painted on downtown event space the Vortex a "shameful act of anti-Semitism." The painting depicts the Grim Reaper wearing a cloak covered with Stars of David. Los Angeles Times: "The Vortex said in a statement on Facebook that the mural was created several years ago to acknowledge the September 11 terrorist attacks as part of the 'L.A. vs. War' art show. The company said it 'stands for free expression' and that the artist 'did not intend to express an anti-Semitic message.' It said it planned to host a public discussion about the controversy at the Olympic Boulevard event space." https://lat.ms/2H1UUk5

Surprise Event Metric of the Week
3,500: the estimated number of people who attended the inaugural L.A. Beer and World Barbecue Festival last Saturday in Chinatown, some allegedly without a ticket. Eater reports that the event had a massively delayed start time, a lack of staff, lines that lasted for hours, and overcrowding. Fever, the event-based app that organized the festival, is offering refunds.

Overheard
"There goes summer break and forget about having a holiday break in December.”
—An unnamed award strategist, speaking to the Hollywood Reporter about the Oscars' move to February 9 next year, which will affect a number of events such as the Bafta Awards and the Santa Barbara Film Festival. BizBash spoke to event producers about the change this summer; see what they had to say.

On the Scene
Last night, we attended an event- and wedding-planner reception at the Wilshire Loft downtown, which included marquee signage, bride-and-groom cornhole, a champagne bar offering fresh fruit, and a dance floor with multi-colored lighting.

What's Next
A few of our Top 100 events take place next week, including the 40th anniversary of the Planned Parenthood Food Fare on Thursday, March 7. The daylong event at Barker Hangar will feature booths from more than 150 restaurants, caterers, wineries, and retail merchants, plus an auction and a V.I.P. reception.

Other top events next week include the Natural Products Expo West, which will draw 85,000 people to the Anaheim Convention Center from March 5 to 9. And the BNP Parabis Open, the annual tennis tournament owned by Oracle co-founder Larry Ellison, takes place March 4 to 17 at the Indian Wells Tennis Garden.