For the launch of the brand's new Clubmaster sunglasses, Ray-Ban nodded to the \'50s with a handful of emerging bands covering their favorite songs from the decade.

Ray-Ban celebrated the stateside launch of its new Clubmaster line of sunglasses this past Tuesday with a free concert at Bowery Ballroom. The Luxottica Group-owned brand recreated the vintage design’s heyday with bands like Black Kids covering their favorite songs from the '50s. Around 800 guests came and went during the evening, including Maggie Gyllenhaal, Kevin Bacon, and the ubiquitous cast of Gossip Girl.

“Ray-Ban Remasters,” as the night was dubbed, featured nostalgia-fueled performances from White Williams, Ipso Facto, and Black Kids belting out covers of songs like “You Don’t Own Me,” while the familiar lyrics scrolled across a large ticker next to the stage. The musical event was the only of its kind for the American market, but there are two others planned abroad for early 2009.

“The link [between Ray-Ban] and music is part of the brand’s DNA,” Luxottica Group director of public relations Cristina Parenti shared with us from the company’s headquarters in Milan. "The Clubmaster was a top choice of sunglasses in the '50s and '60s when rock 'n' roll boomed. We were inspired by [that] in creating a communication platform that’s still cool and edgy today.”

Ray-Ban Remasters is strictly a public relations campaign, and Luxotica Group has no intention of translating the elaborate venture into commercial or trade advertising. It does, however, plan to build buzz with the one-off, exclusive concerts by seeding the new product to the handful of influencers and celebrities who attend. The three markets were selected with the appropriate caution.

“New York City was the first choice because it is an international epicenter for music and the media,” Parenti said. “The United States is the largest market for Ray-Ban and for Luxottica Group. Beijing was our second choice because China is one of the most important emerging markets in the world. It is also one of the most culturally dynamic epicenters globally.” The third choice of Milan seemed obvious given the company’s affiliation and the brand’s popularity there.

The March 5 Beijing event will see Young Knives, New Pants, and the Kills cover a different selection of vintage songs. As for Milan, Ray-Ban has tentative plans for an early April show but is still solidifying the lineup. 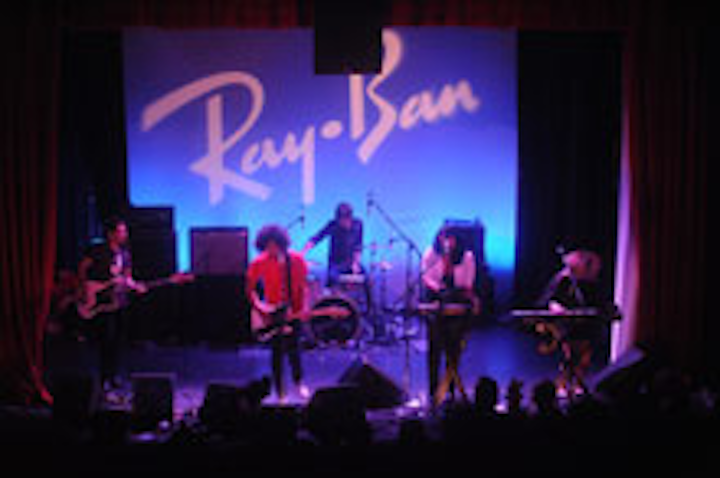 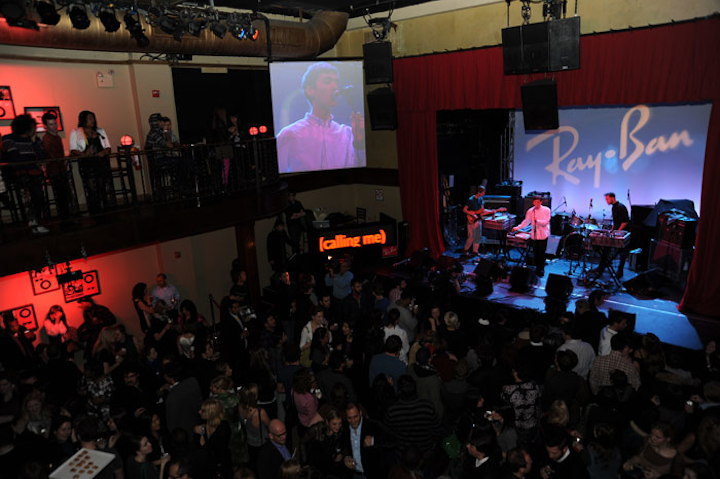 A large ticker next to the stage scrolled lyrics to some of the songs covered by the bands.
Photo: Jamie McCarthy/WireImage 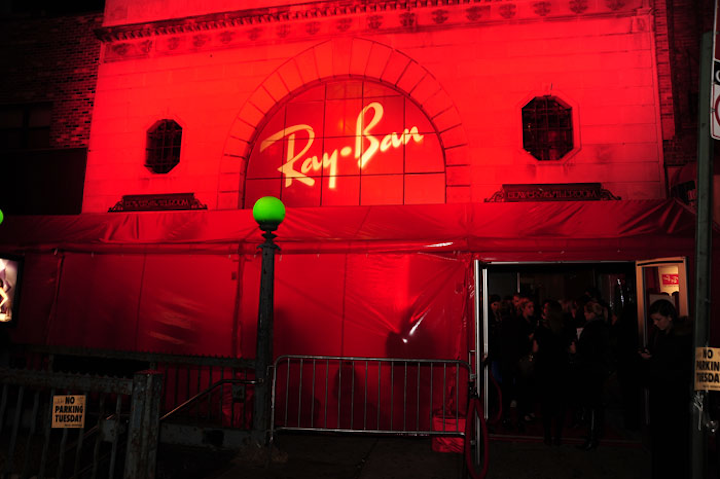 Ray-Ban covered the party in its signature red from the moment guests pulled up outside the venue.
Photo: Jamie McCarthy/WireImage 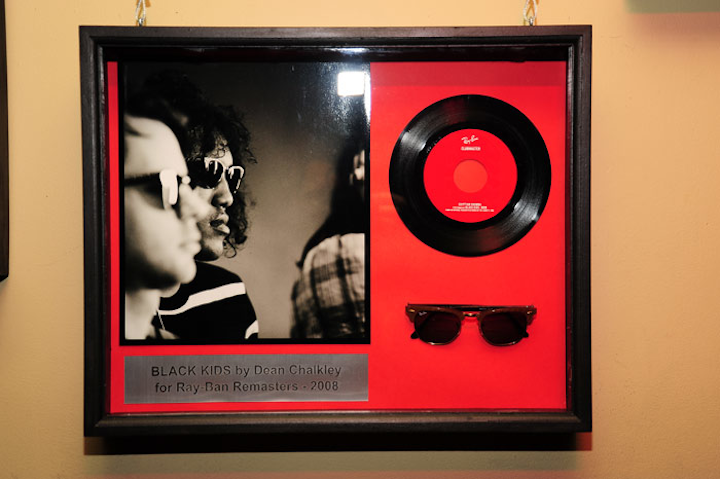 Display cases with the sunglasses, 45s of the bands' music, and original photography of the artists lined most of the venue's walls.
Photo: Jamie McCarthy/WireImage 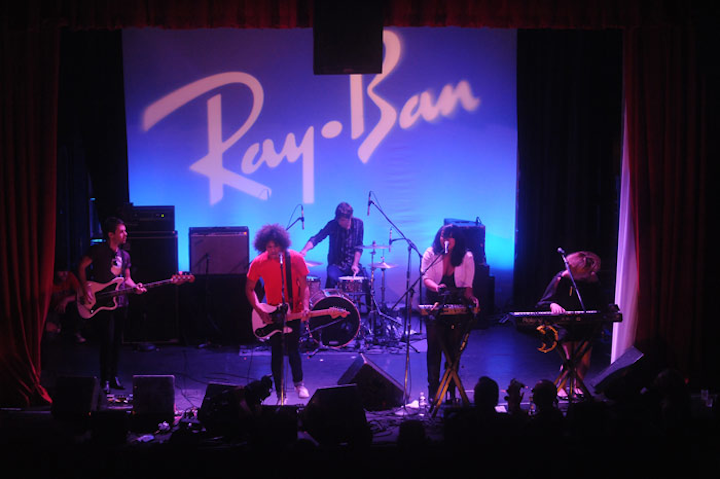 After performances by White Williams and Ipso Facto, Black Kids closed the evening with their rendition of the Tammys' "Egyptian Shumba."
Photo: Jamie McCarthy/WireImage 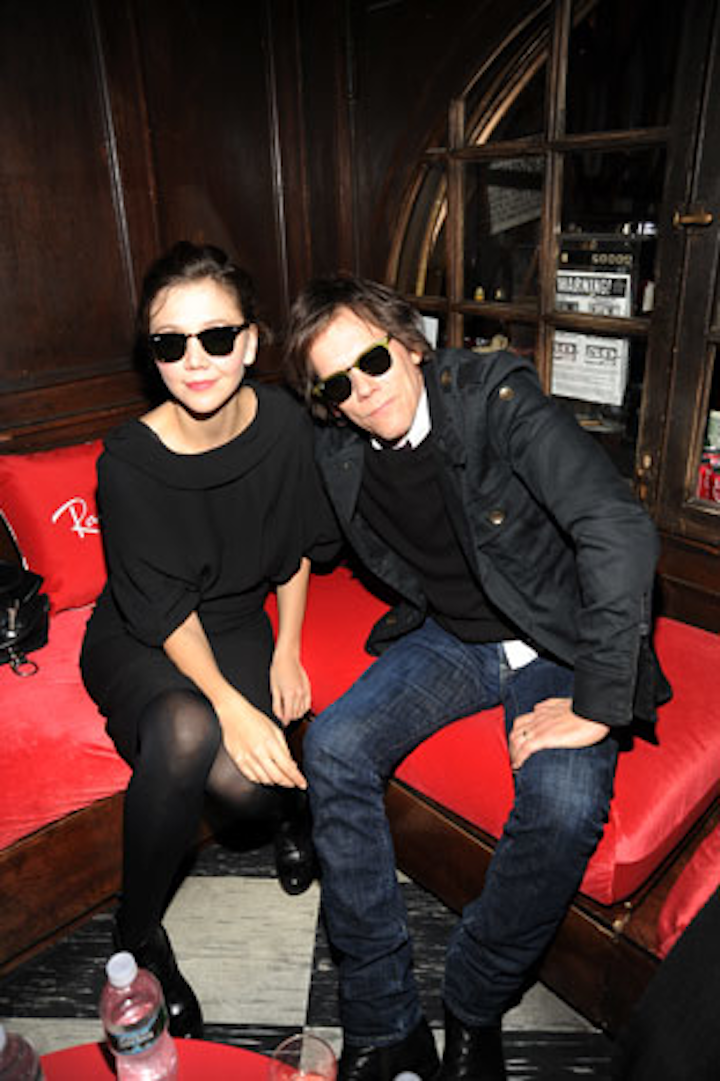 Some of the noteworthy attendees included Maggie Gyllenhaal and Kevin Bacon, who donned the Clubmaster glasses for most of their photos.
Photo: Jamie McCarthy/WireImage 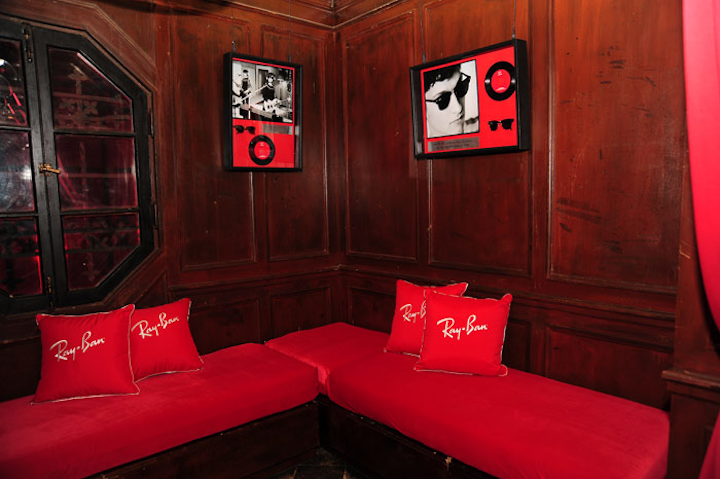 The V.I.P lounge upstairs had red banquettes and pillows for guests who wanted to keep their distance from the fray on the main floor.
Photo: Jamie McCarthy/WireImage
More in New York City & Tri-State Area