When Manhattan is the backdrop for staging a man-versus-beast event that involves upward of six dozen bulls, each weighing around 2,000 pounds,  organizers face a unique set of challenges. This past weekend’s fifth annual Professional Bull Riders Built Ford Tough Series tournament, whose logistics were overseen by the rider group's event and operations coordinator, Jerome Robinson, battled several minor inconveniences, including New York traffic, lack of parking spaces, and Madison Square Garden's entirely curved venue. On top of that, the bulls needed rabies shots to enter the city.

“We have to unload everything downstairs and bring it in piece by piece up the ramp, so it’s a lot more time-consuming than our normal show,” said Robinson. “Timing is key, not just to avoid traffic, but to avoid congestion in going up and down the ramp.” A five-man crew was charged with the “running of the bulls” at the Garden, ensuring that each animal, transported from the New Jersey State Fairgrounds in one of four semi trucks, safely made its way into a series of mazelike pens that served as the bulls' home during the competition.

Although the hosts invited press to cover the bull load-in at 3 p.m. on Friday, traffic kept the bulls from showing up until about 4:30.

New York is the best-selling market on the tournament's 28-city circuit. “MSG is a historic venue, and New York is the media capital of the world, so as a media-forward property, it’s an important place to be and bring our product,” said Sean Gleason, president and C.O.O. of the riders group.

The tournament takes place on what is normally the Garden’s ice rink. To prepare for the bull riding, Robinson and his team covered the ice with a subfloor, on top of which they placed 900 tons of dirt—but not the typical clay soil one would find at such an event, which is too moist this time of year. To alleviate the problem, crushed rock with little pebbles up to three-eighths of an inch embedded was transported from New Jersey. “This is one of the first times we’ve done it in the Garden with the crushed rock,” said Robinson. “After we’re done, we send it back and it gets used for road base.”

Robinson and his team began setting up on Thursday at 5 a.m. to ensure production was set for Friday’s 8 p.m. start time. “[Setup was a] little longer than normal due to the [venue] limitations, and also because it’s the first show of the year coupled with new elements—including a brand-new cocktail reception area and a significantly larger backstage—that require some trial and error,” he said. The teardown, by contrast, was much faster: Robinson and his crew were done by noon Monday.

According to Gleason, digital media played a bigger role in promotions this year, complementing the local television ad buy (about two million people were expected to tune in over the weekend). Revenue, meanwhile, has continued to grow at a rate of 10 to 15 percent each year since 2007, when revenue was reported as $25 million. That same appeal that has viewers tuning in is what the riders group hopes to capitalize on with its sponsors, which range from Ariat and Wrangler to Stanley Tools and Jack Daniel's.

“Whether new or old fans, people have been with us for a long time,” said Gleason. “That passion translates through to how they feel about the sponsors that participate with the sport. They do care that Stanley Tools are here, and we’re able to influence a lot of people in their buying choices.” 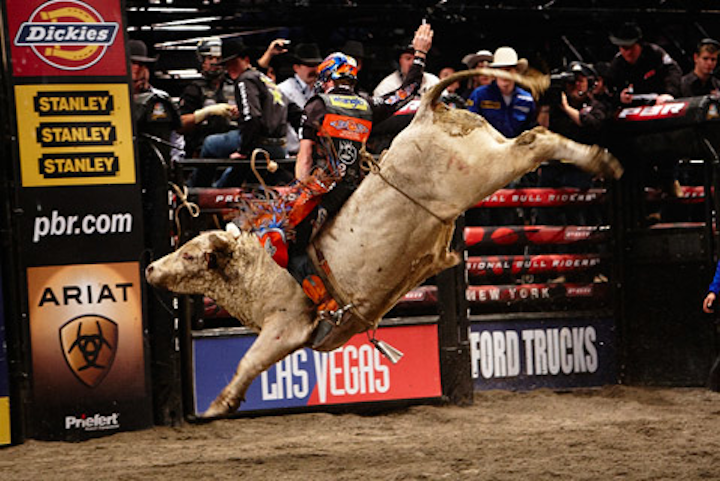 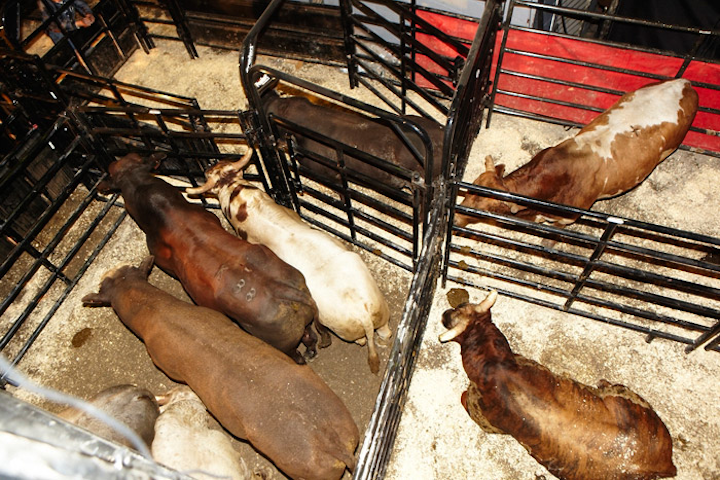 To accommodate the competition's dozens of bulls, the Professional Bull Riders took out one complete side of seating in Madison Square Garden. The pens, measuring 30 feet wide by 85 feet long, were subdivided into smaller pens based on the bulls' temperament.
Photo: Ronnie Andren for BizBash 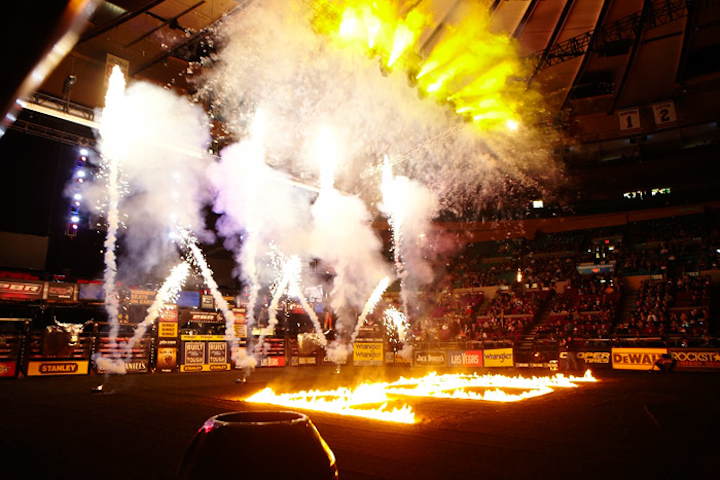 While the arena's regulations didn't permit the full-on flame effects normally put on by the bull riders' group, pyrotechnics at the beginning of each day's competition, coupled with music and lighting, created a rock-concert-like atmosphere.
Photo: Ronnie Andren for BizBash 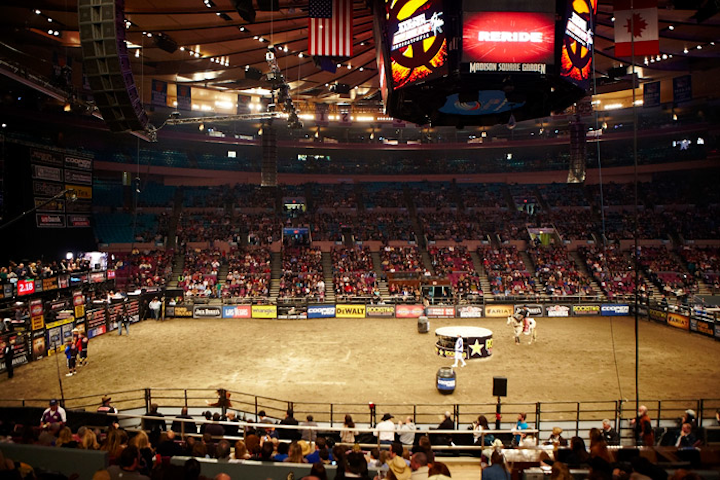 Originally meant to house photographers shooting the bucking bulls, the "shark cage" in the center of the arena this year had a lid placed on top, creating create a stage that doubled as a safety zone and entertainment spotlight for the M.C. following the pyrotechnic display.
Photo: Ronnie Andren for BizBash 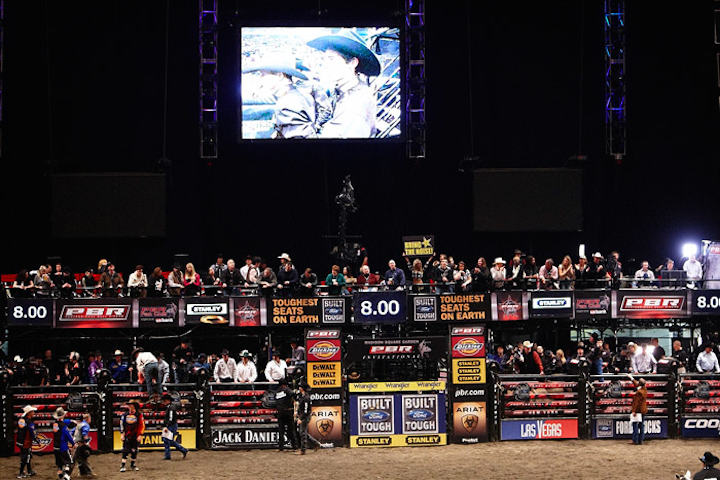 The 16-foot-deep by 80-foot-wide steel platform above where the bulls entered, known as the backstage area, was a new design this year. It was the Professional Bull Riders' largest-ever such platform, built to accommodate the live TV broadcast and new time clocks, as well as V.I.P.s and sponsors.
Photo: Ronnie Andren for BizBash 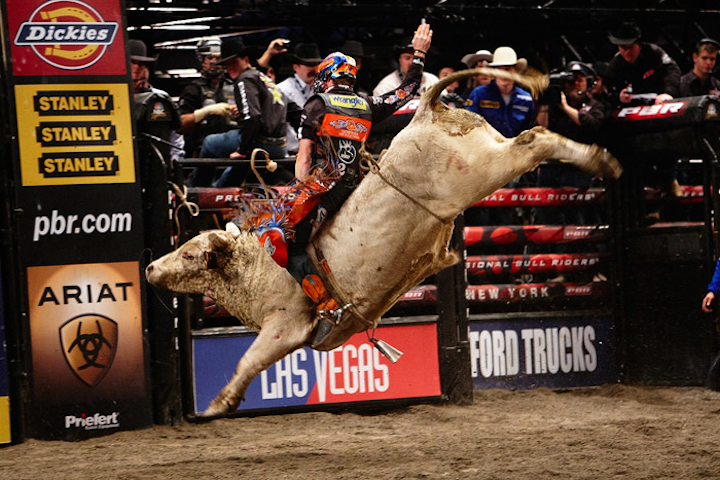 Each cowboy's aim was to buck one of the invitational's 65 bulls for eight seconds without falling off.
Photo: Ronnie Andren for BizBash 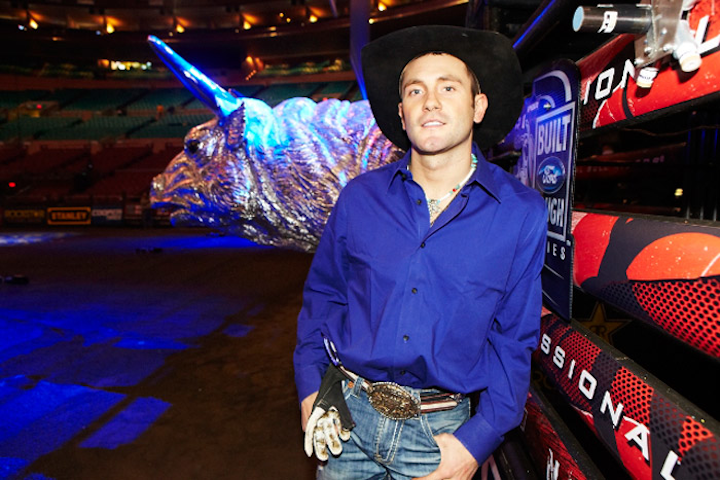 2010 Professional Bull Riders New York winner Shane Proctor stood adjacent to two chrome-plated bull heads, made of heavy-duty papier-mâché, that were hung at the base of the stage.
Photo: Ronnie Andren for BizBash 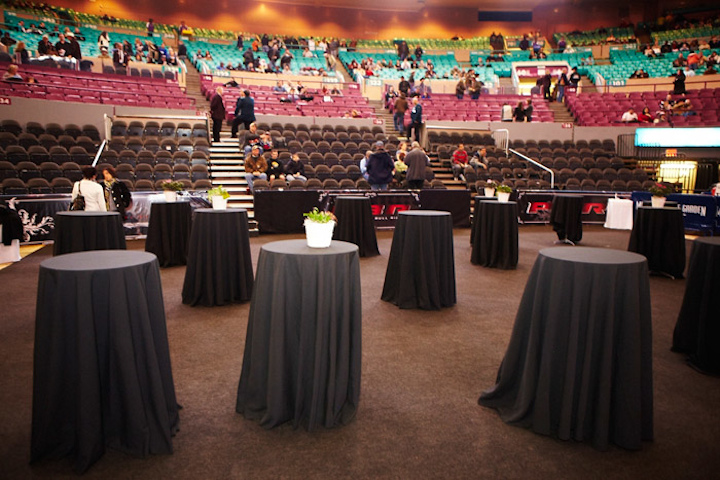 New to this year's was a V.I.P. cocktail reception area staged at the far end of the field. At around 2,400 square feet, the space entertained about 300 guests with an open bar, allowing them to walk around when not seated. A six-foot-high steel fence protected all attendees.
Photo: Ronnie Andren for BizBash 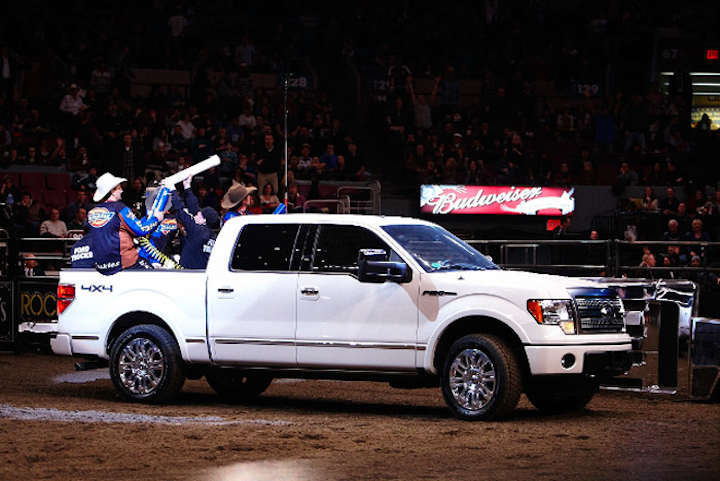 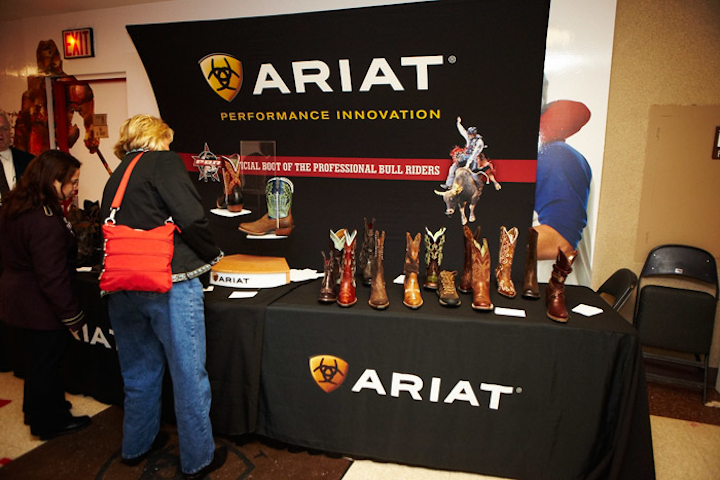 Best known for their cowboy boots, event sponsor Ariat had a display on the main concourse where attendees could touch and feel their quality footwear.
Photo: Ronnie Andren for BizBash 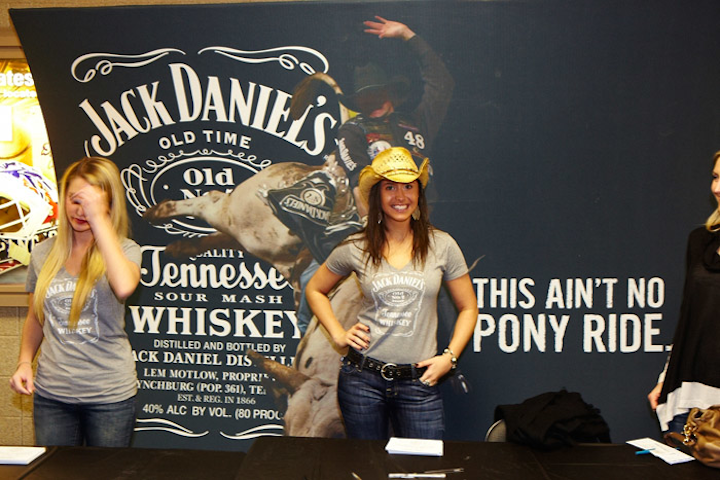 Jack Daniel's, the tournament's official liquor sponsor, was one of a dozen or so sponsors that set up tables in the concourse to generate brand awareness.
Photo: Ronnie Andren for BizBash
More in New York City & Tri-State Area