With 4,000 guests, it’s difficult for the Robin Hood Foundation Benefit to get larger. In fact, this year’s event, held May 9, took over three halls of the Jacob K. Javits Convention Center. So instead of making the benefit itself bigger, organizers created additional events on the same day, hoping to reach different groups of donors and raise awareness about its efforts.

Called Night for NYC, the events kicked off with a group of children who helped ring the opening bell with Emma Bloomberg at the Nasdaq MarketSite in Times Square. Other activities included two concerts aimed at younger patrons, one featuring Citizen Cope and the other with Joey Bada$$ and DJ Mark Ronson. There also was an outing to Yankee Stadium where 10,000 beneficiaries of the foundation received free tickets and a stadium-wide giveaway of 30,000 Yankees hats in Robin Hood green. Students from the Robin Hood-supported KIPP Academy String and Rhythm Orchestra performed on the field before the game began. The foundation also arranged to have the Empire State building, Madison Square Garden, and the Bloomberg Tower switch their exterior lighting to the foundation’s signature shade of green at night.

The events were integrated into the main benefit with live look-ins to Yankee Stadium and a common social media campaign under the hashtag #NYC4NYC.

Decor at the benefit itself also took on larger-than-life proportions. This year’s design from David Stark Design & Production played on the theme of “Unlock the Future,” starting with the entrance, which invited guests to pass through an oversize keyhole. Individual keyholes continued down the carpeted entryway like giant arches, giving way to massive unlocked doors in the cocktail space.

“We love a metaphor,” said the foundation’s Lindsay Carroll, one of the event’s producers. “Keys opening the doors to the opportunities that Robin Hood provides is something we can integrate into the programming and messaging.”

The benefit, New York’s largest single fund-raiser—brought in $61.2 million, down from its record of $101.7 million last year that had been fueled by two $25 million donations. Proceeds support poverty-fighting programs in the city.

Read on for more highlights, including host Katie Couric, headline entertainment from Usher, and more. 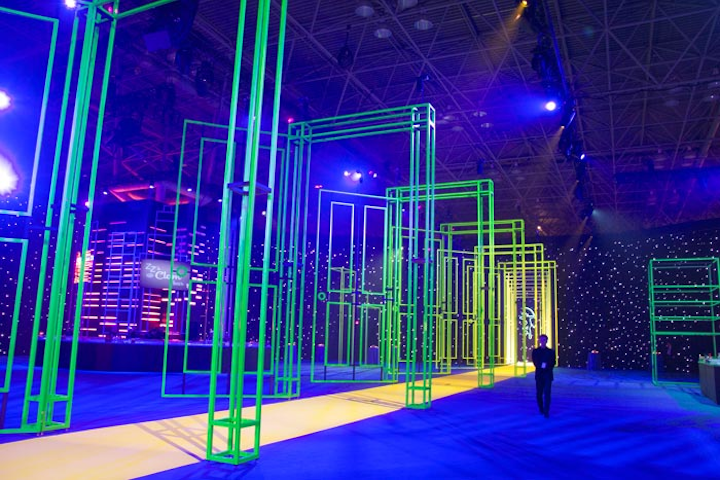 The keyholes gave way to a series of unlocked doors that continued throughout the cocktail space.
Photo: Taylor McIntyre/BizBash 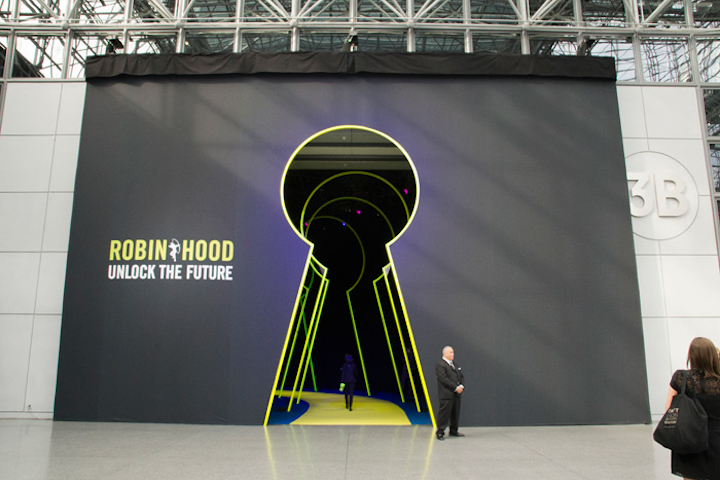 Guests entered the benefit by walking through an oversize keyhole, a visualization of the evening's theme of "Unlock the Future." Freestanding keyholes in the same size continued at intervals along the entryway.
Photo: Taylor McIntyre/BizBash 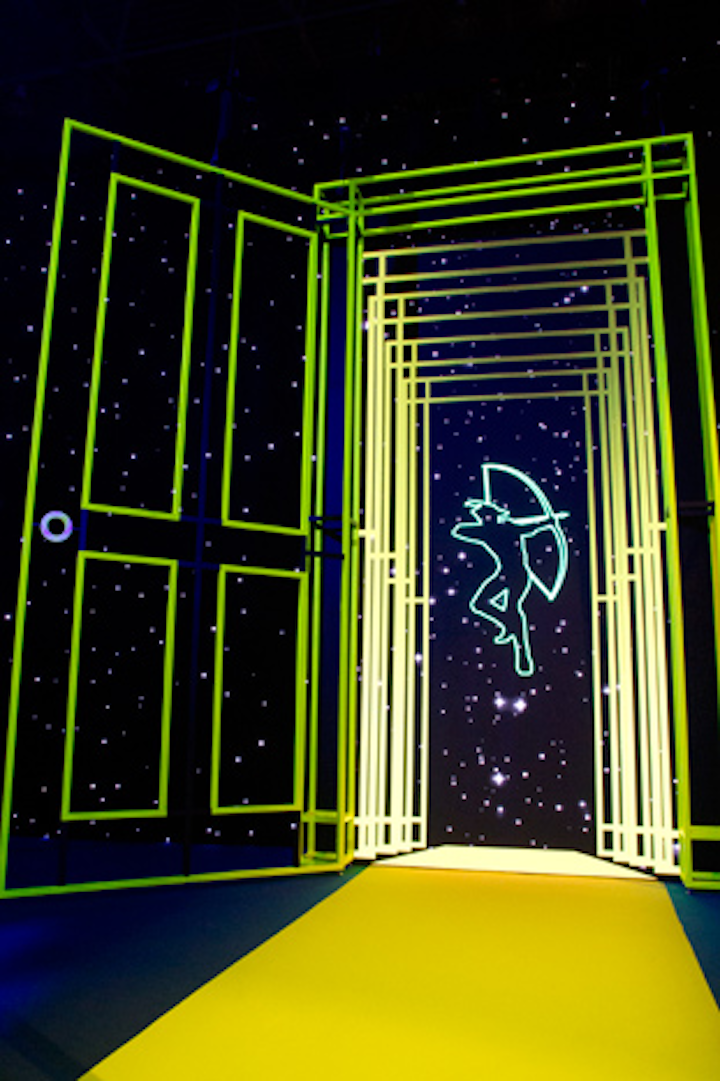 They ended at a screen that displayed the foundation's logo as well as a digital representation of the doors that made them appear to go on forever.
Photo: Taylor McIntyre/BizBash 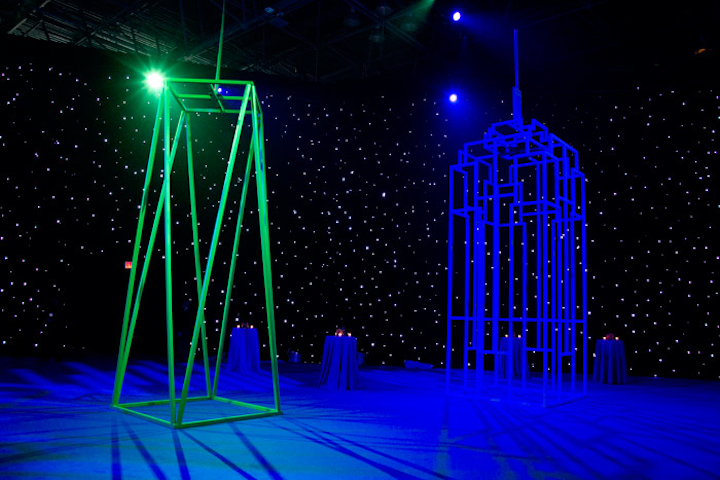 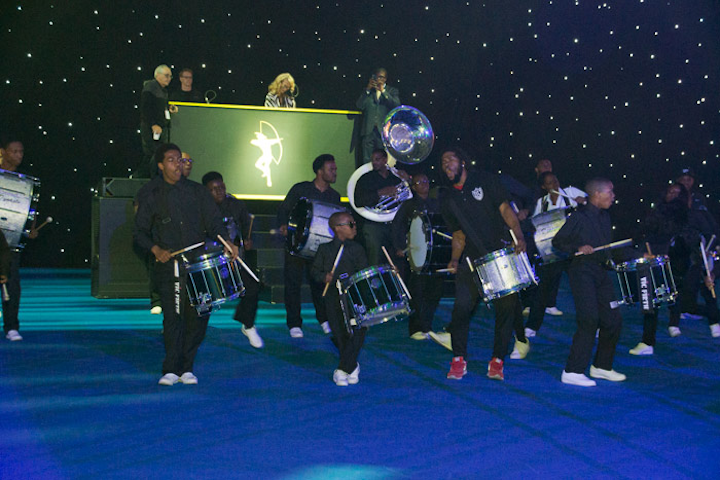 A drum corps and horn players from the Brooklyn United Marching Band played during the transition from cocktails to dinner.
Photo: Taylor McIntyre/BizBash 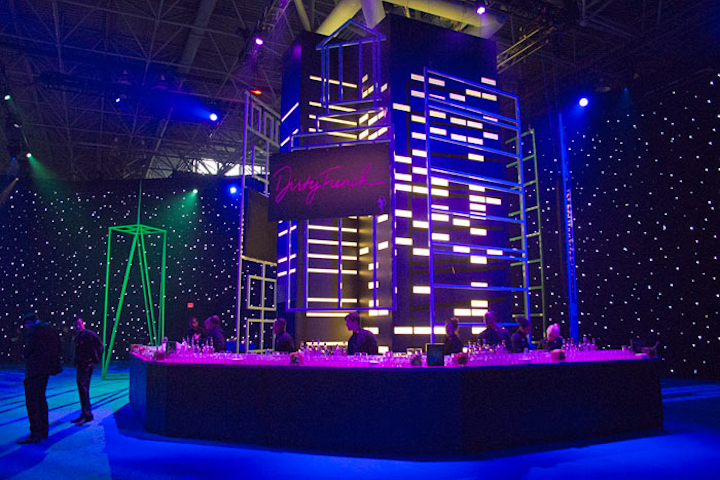 The bars were designed to look like New York City skyscrapers. Each served a specialty cocktail and was named for a restaurant by Major Food Group.
Photo: Taylor McIntyre/BizBash 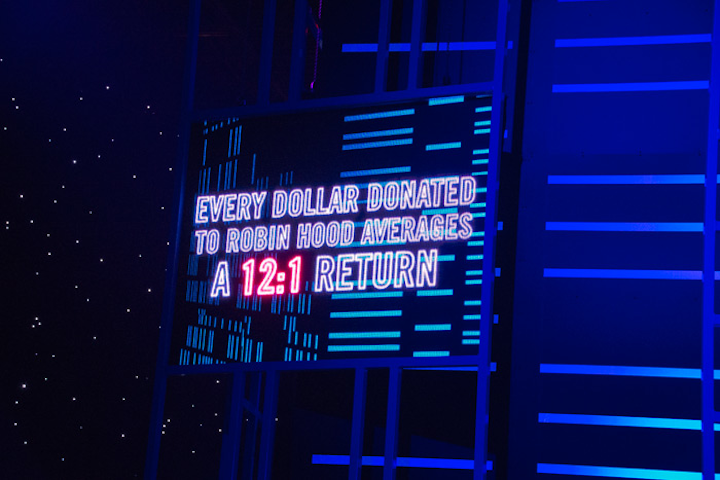 The bars were embedded with screens that contained messaging about the foundation's work.
Photo: Taylor McIntyre/BizBash 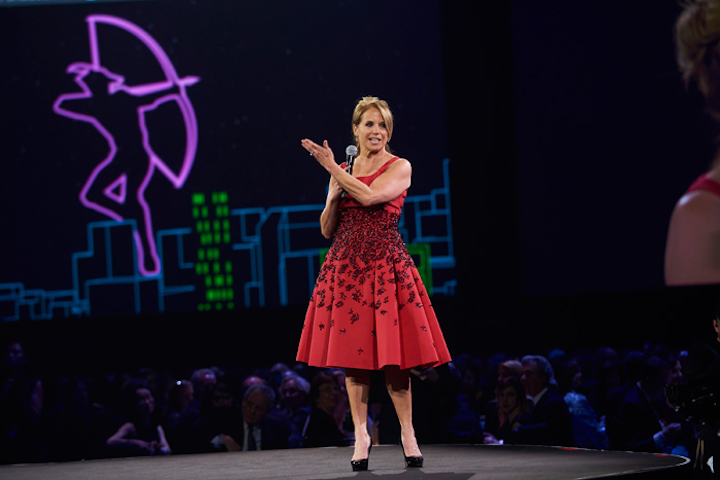 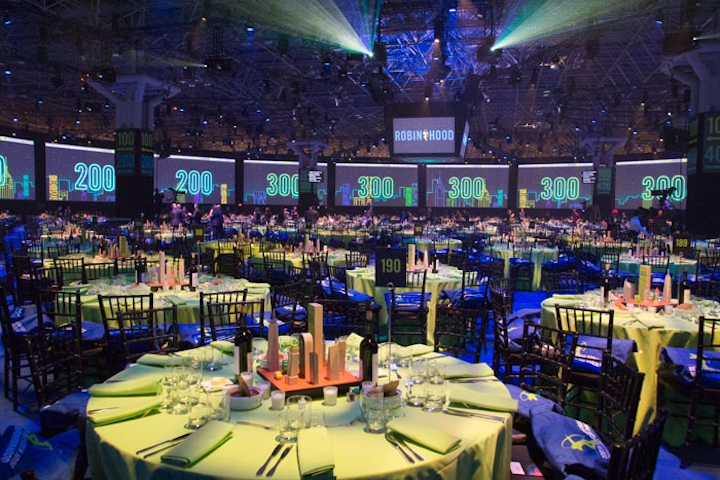 A ring of large screens lined the perimeter of the room. As guests entered the dining room, numbers on the screens and color-coded tableclothes helped them find their tables.
Photo: Taylor McIntyre/BizBash 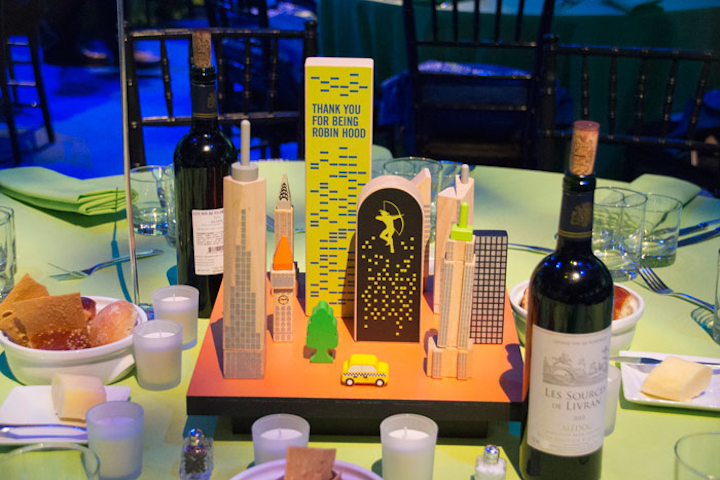 The centerpieces resembled building blocks for children, underscoring this year's focus on early childhood development. After the benefit, the blocks were removed from the base and donated to a Robin Hood-funded program.
Photo: Taylor McIntyre/BizBash 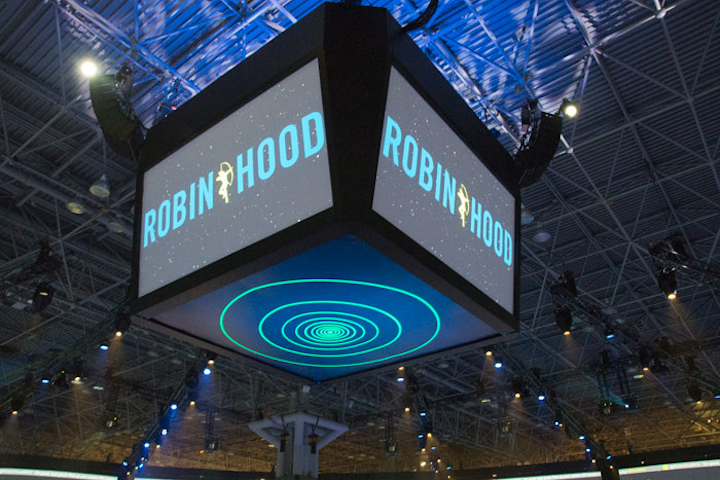 The room layout had a different look this year, with an in-the-round setup instead of a stage at the front. A Jumbotron-style, four-sided overhead screen offered close-ups of the action in the middle of the room.
Photo: Taylor McIntyre/BizBash 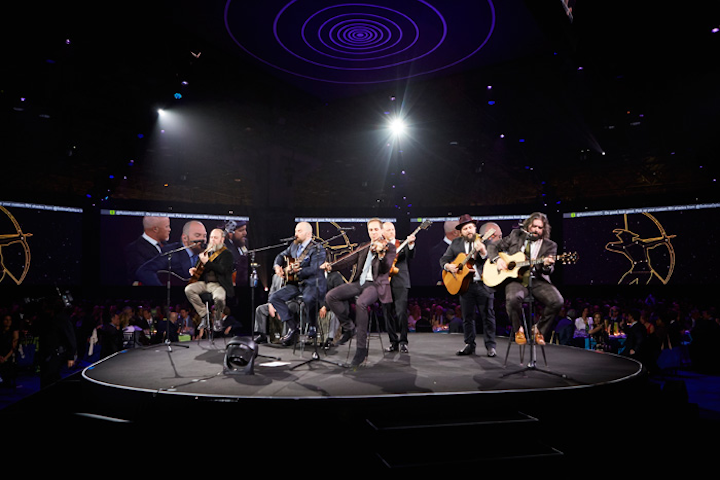 One of the benefit's traditions is an unannounced musical set. This year, the Zac Brown Band performed.
Photo: Sean Carroll 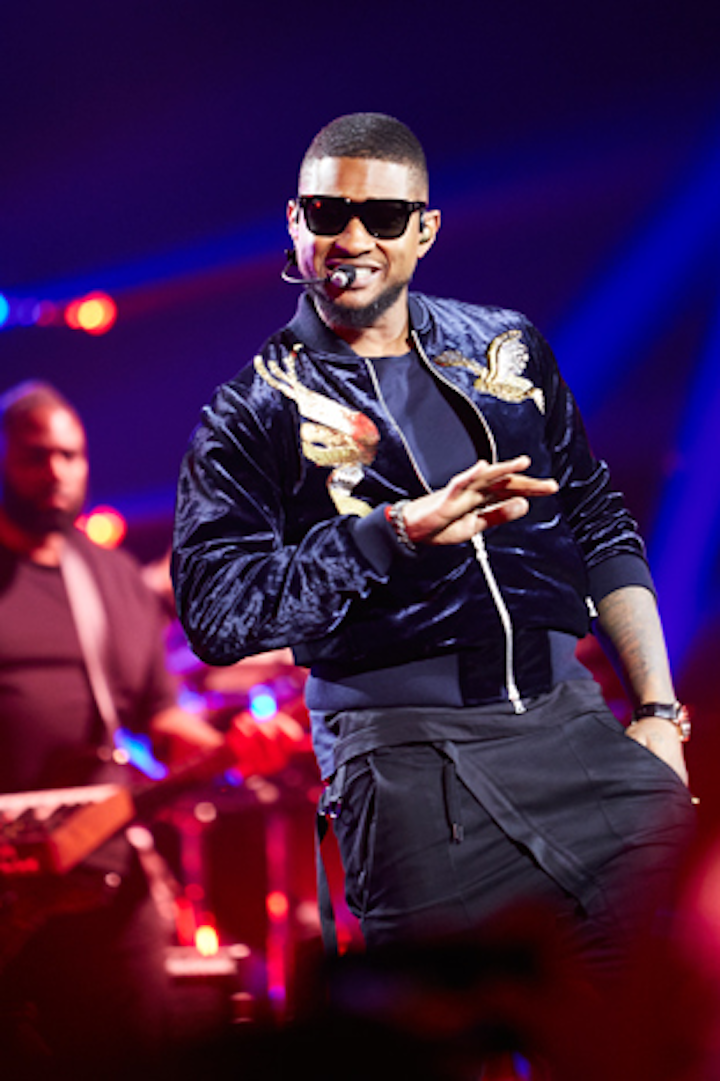 R&B star Usher was the headlining entertainment at the benefit.
Photo: Sean Carroll 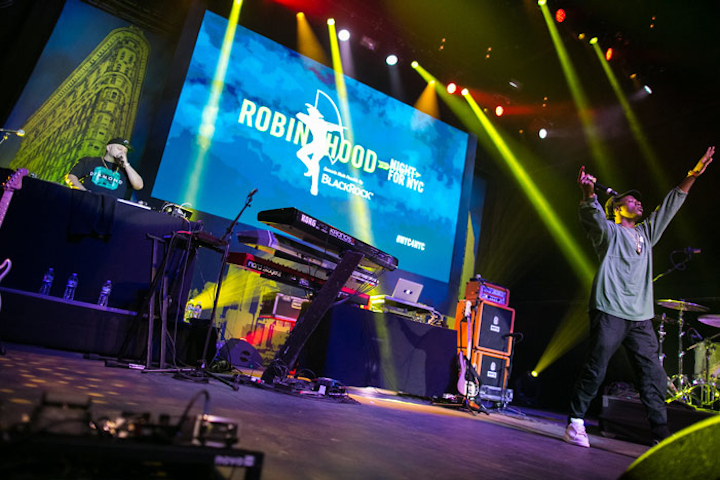 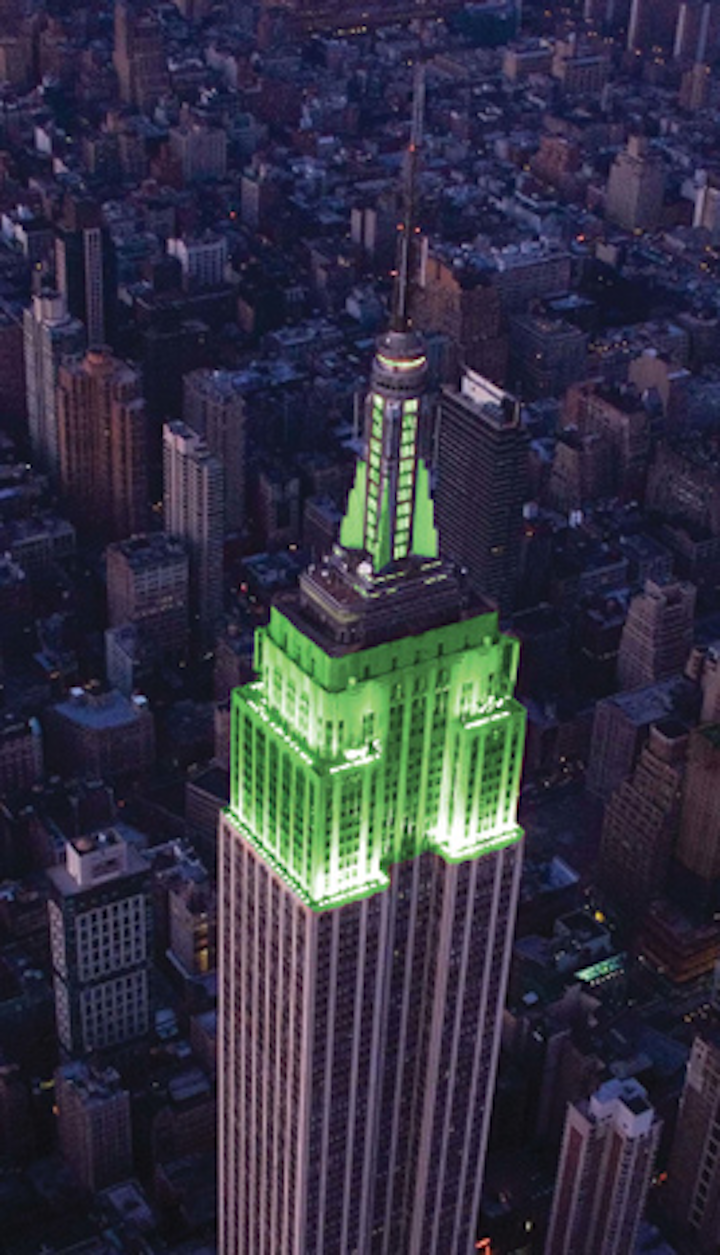 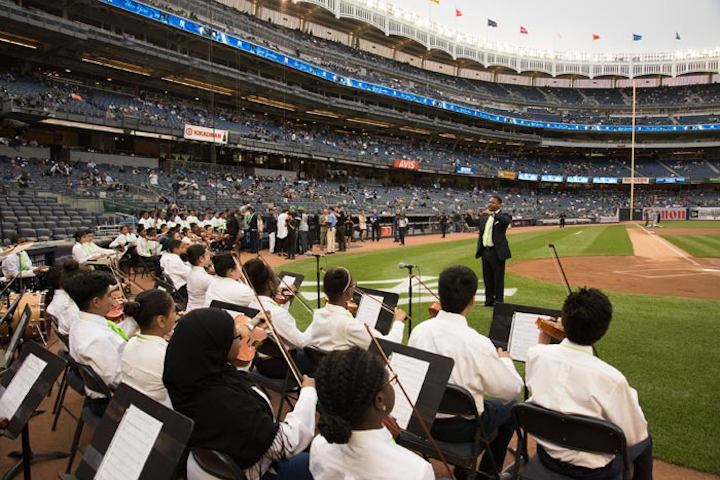