Or is it just having growing pains? As the industry experiences a bit of a mutiny, insiders speculate on the future of the citywide event.

As has been the trend in recent years, more American fashion designers are going rogue. From foregoing traditional runway shows in favor of see-now, buy-now presentations to showing in other countries to going off schedule, many brands and houses are tugging on the thread that used to bind New York Fashion Week.

For example, this year, Proenza Schouler, Rodarte, Altuzarra, and Thom Browne all opted out of showing in New York, while Lela Rose employed influencers and bloggers to model her Fall 2018 pieces for an Instagram show. Zac Posen dressed Katie Holmes in his Fall/Winter 2018 collection for a series of fashion editorial-esque images in lieu of the runway. Even Kanye West ditched his must-see Fashion Week spectacle. Instead he went low-key, using Instagram and his wife Kim Kardashian to promote his new buy-now Yeezy collection.

So what will the Fashion Week of the future look like? The answer has big implications for the city and the event industry. A 2015 analysis by the New York City Economic Development Corporation showed that New York Fashion Week generates close to $900 million each year (more than the U.S. Open or the New York City Marathon), with $532 million coming from visitor spending; the twice-a-year event attracts more than 200,000 attendees. As for the cost of the shows themselves, designers can pay on average around $200,000, including the price of production, PR, models, venue, and stylists. Venues can range in cost from $15,000 to $60,000.

Fashion and event industry insiders predict that social media and technology will continue to be an unstoppable, driving force in the production and consumption of shows.

"The confluence of technology and the fashion industry will continue its sharp upward trend, as designers continue to crave innovative and engaging methods to reach their customer base,” said Laurie DeJong, C.E.O. of LDJ Productions. And that tech influence will go beyond simply posting to Instagram. “The use of augmented reality and live, clickable content that consumers can interact with will drive sales in all interaction points—runway, online, social, and in-store."

For example, Rebecca Taylor teamed up with Tilt Brush by Google, a virtual-reality app that allows users to “paint” a three-dimensional space, for her Fall 2018 presentation. The immersive Rebecca Taylor x Tilt Brush installation at her meatpacking district store in New York featured light-infused 3-D projection mapping that was enhanced with Tilt Brush and special effects through augmented reality.

“This is our first real venture into Fashion Week,” Tory Voight, engineering program manager of VR for Google, told Fashion Unfiltered. “We’re always looking for how our products can exist in the real world, not just to accentuate experiences, but to be used as a tool for designers.” Adding, “we’re really interested in how New York Fashion Week can, with technology, deviate from the norm of a runway show to something a little more intimate like this.”

Interestingly, while some are blaming the rise of tech and social media for the imminent death of Fashion Week, it may actually be making it more significant.

Set designer Stefan Beckman, principal of Stefan Beckman Studio, believes that because consumers are viewing fashion on their phones, “it’s important [for brands and designers] to make a big splash, to make a big statement.” Beckman, who designed shows for Tom Ford, Coach, and Marc Jacobs during February's Fashion Week, is known for creating buzzy, 'Gram-worthy events. Plus, he added that shows will remain relevant because, as print advertising declines, “the need for that social media presence and the show is just as important as ever.”

In a sense, designers are becoming content creators by adding more digital-friendly elements to their events. “Most designers or houses or brands want their runway show, but they also want something else [such as backstage lookbooks], which become more assets for them to use either on social media or other outlets,” Beckman said.

Yudit Svirsky, partner at Six Wings Events, said her team’s goal when producing events is to find out “what will encourage our guests to take their phones out of their pocket.” The New York-based boutique event-planning agency designed and produced the Café by Papyrus at Spring Studios during Fashion Week, which allowed guests to order a coffee, grab a snack, and mail a Papyrus card to family or friends.

“Given what we know about the power of social media and its impact on the evolution of the fashion industry, change is inevitable, which can wisely be used to our advantage,” Svirsky said. “Whereas creativity may have once dominated the catwalk, the future of New York Fashion Week will truly embody innovation as event planners and fashion designers dream up novel opportunities to encourage audience engagement and leverage the power of social sway.” 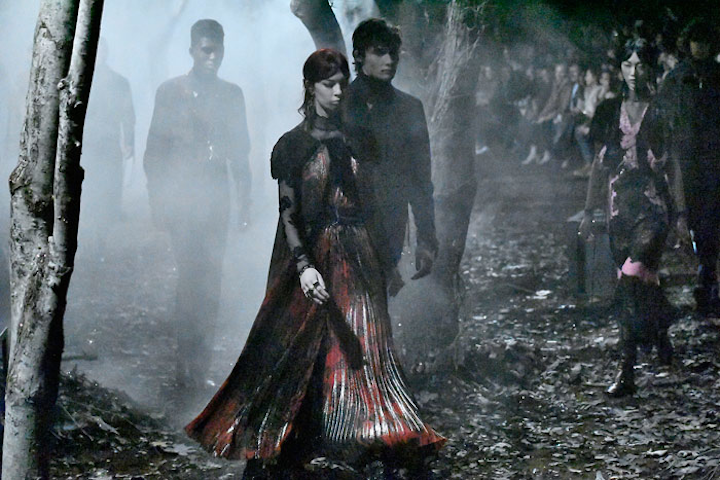