Oscars 2018 Review: Event Producers Give 90th Ceremony an A-

Event producers from across the U.S. and Canada discussed what they liked and disliked about the 90th Academy Awards. 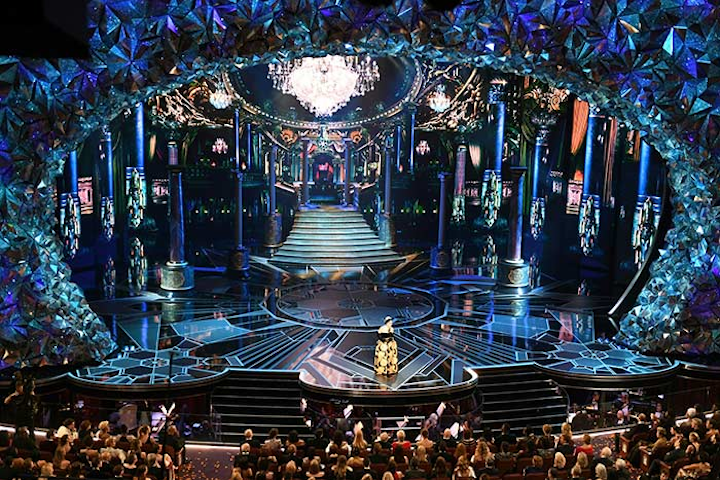 There were no Best Picture mishaps at the 90th Academy Awards on Sunday, but the ceremony did manage to deliver memorable moments for its milestone anniversary. At the Dolby Theatre in Los Angeles, returning host Jimmy Kimmel, along with presenters, award winners, and performers, wove in commentary on equality in Hollywood, the #MeToo and #TimesUp movements, and the country's political climate. Visually, the venue offered an opulent stage designed by Derek McLane that incorporated 45 million Swarovski crystals. The sparkling stage served as the setting for performances by Mary J. Blige, Miguel, and Sufjan Stevens, and acceptance speeches from actors and creators including Frances McDormand (Best Actress), Jordan Peele (Best Original Screenplay), and The Shape of Water director Guillermo Del Toro—whose fantasy monster romance film took home four awards including Best Picture.

Event producers from across the U.S. and Canada discussed what they liked and disliked about the design, production, and entertainment during the 90th Oscars.

Jon Retsky
“What a relief to be done with art deco, steampunk, and old Hollywood glam. Last night's 90th Oscars offered a solid, sharp, refreshing, elegant, classy, and immaculately produced design. That’s a lot of adjectives, but it’s well deserved. The stunning, sparkling, crystal-covered stage and proscenium grounded the evening in operatic luxury without being gaudy or overproduced. Each segment offered a new look and feel, but the entirety of the show never felt disjointed or overly thematic and cliched. Even the giant crystal Oscar statues looked stunning. When the show wasn’t being upstaged by Mark Hamill’s beard or Jodi Foster’s crutches, it offered a dynamic and layered design, bringing together lighting, video, and scenic in a way that nearly fooled the eye … in a good way. There were many moments where it was difficult to discern what was scenic and what was video.

Frankly, I enjoyed the fact that even I was tricked and couldn’t make the distinction at times. The mirrored video panels stole the design in my book. These modular shifting LED screens danced and weaved perfectly in and out of segments, immediately transporting the audience from Baroque to the 1920s with seemingly no effort. Ornate touches, such as the ever so versatile and illuminated industrial spokes, brought variety to the design without seeming foreign or out of place. From a content standpoint, I was relieved that I didn’t feel preached to and that this wasn’t an overly politically charged evening. To me, it felt like a much needed three-plus-hour escape from my addiction to CNN.

Aside from the somewhat unnecessary field trip to the theater next door, I thought Jimmy Kimmel delivered a refined, fun, and excellent awards show, delivering just the right amount of sass to Price Waterhouse for their flop last year. Extra bonus points for the stunning show-stopping performance of ‘This Is Me’ performed—in stark contrast to the rest of the scenic design—on a perfectly-lit bare stage. This year, the design was the clear winner. It celebrated light, the movement of light, and radiant reflection. The end result? A night of infinite dazzle and sparkle.”

Letter Grade: A
Retsky is co-founder and lead lighting designer at Got Light, a San Francisco-based event design and production company. Clients include the San Francisco Museum of Art, Twitter, Salesforce, the San Francisco Symphony, Dolby, Google, and Facebook.

Gabrielle Kessler
“Jimmy Kimmel and ABC had quite a task ahead of them with this year’s Academy Awards. Somehow, they managed to straddle the line between reverence and reality, while visually paying homage to the 90 years of ceremony that came before. While on paper, 45 million Swarovski crystals may have seemed out of touch with the current humanitarian climate, ABC and Jimmy Kimmel’s honest and frank approach to the #MeToo movement and historic under-representation of minorities during the Oscar festivities balanced out the luxurious, art-deco-inspired backdrops we’ve become accustomed to.

The show did not back down from spectacle. With more than five original sets, the Oscars unapologetically stood by old-school Hollywood glamour, while simultaneously addressing pertinent social issues through poignant commentary and host selection.The message was clear: We don’t need to totally throw out the old to usher in a new paradigm when it comes to representation. As a Hispanic-American, I look forward to this continuing trend and loved seeing people who represent me in the world of entertainment.

Visually, some highlights included the crystal, stalactite-like proscenium that reflected the lighting design of each set-up, the LED backdrops that mimicked baroque halls and chambers, and the Swarovski crystal ‘Oscars’ that transitioned to LED video panels.”

Letter grade: A
Kessler is the creative director for the Visionary Group, a Los Angeles- and New York-based experiential marketing agency. Clients have included Samsung, Nickelodeon, Vevo, and Spotify.

Gregg Eilers
”Finding a balance. That's one of the toughest parts of delivering live presentations with an endless stream of award winners and speeches. As event producers know, that balance is what makes for a memorable event while blending spectacle with poignancy. As has become the norm over the past few years, the Academy Awards is the place to celebrate the Hollywood perspective on the art of filmmaking along with ‘interpreting dreams.’ While there were many political statements and pop culture references, the goal of bringing the Oscars to a more accessible level was evident. There were strategic attempts to strike the balance of homage to 90 years of Hollywood with the need to deflate the pomposity of showbiz, especially when each year they have to try and outdo the stunts from prior award shows. After all, everyone enjoys a hot dog shot out of a cannon from a movie star.

The spectacular scenic design made the proscenium feel like a crystal tiara—and as Jimmy Kimmel joked, ‘nothing represents humility like crystals.’ It was the marriage of old world movie palaces and contemporary stagecraft that allowed the designers to create amazing retro looks on the enormous canvas of LED screens. The live performers delivered powerful moments in a state-of-the-art theatrical setting, one of the most impressive balances of the night. The interstitial montage videos were brilliant in their delivery, editorial and appreciation for the finest Hollywood memories from 90 years. The overall writing is always a bit forced, but the ad-libs and pacing of the transitions made it feel like they achieved the main objective of giving the winners their moment to bask in the glow and keep it moving.

When the audience feels they are part of the Hollywood fantasy and the search for ‘beauty, truth, honor, social justice, and acceptance’ is woven throughout, the event feels like a celebration. With a Jet Ski dangled out there as a prize, who doesn't find the bizarre blend of prestigious, campy, political, and gratitude blended with artistry, pop culture posturing, and acceptance as a fun evening? As one of the nominated songs sang, ‘I make no apologies ... this is me.’ Hollywood wants us to know it's OK to tell your story and maybe even change the world.”

Letter grade: A-
Eilers is the vice president of meetings and events at Switch, a St. Louis-based experience agency. Clients include Anheuser-Busch, Nascar, and Bosch.

Keri Miller
“The overall sentiment and emotion of the 90th Oscars was one of dreams, artistry, appreciation, and honesty. I felt authentic emotion from Jimmy, the presenters, the performances, and the acceptance speeches, and I was moved by the messages of strength and unity. I loved the flexibility and storytelling ability of the digital projection stage design, the pairing of technology and clever props and tricking the eye into multiple dimensions. I did find some of the segments distracting and I’m not a fan of how much intense blue light was used. However, the brilliance of the digital content sold me in the end.

The proscenium in my opinion was over the top and seemed to almost loom over the live guests and really distract the viewers at home. With such an authentic and honest message being conveyed, it seemed out of place and overdone, and almost too excessive. The experience matters to all audiences, live and broadcast, and although there was an attempt made to tie in the stage design into the house through lighting and crystals, it did seem as though we were watching two different shows. The warmth of the full human house and the immensity and coolness on stage were disconnected, and it didn’t feel unified. It felt a bit surreal at times.

I did love the shared theater experience where the Oscars thanked the attendees for going to the movies. And how they cleverly made the envelope it’s own star, ensuring that it had pride of place and was in its place. I think the producers did a great job in attending to current issues in simple and honest ways, while ensuring that the purpose of the 90th year of the awards was about the art itself. I am so honored to work in a profession that houses brilliant talent like the producers, designers, and crew of the Oscars. They elevate and inspire us all. The 90th Oscars for me are reflected in the words from Greta Gerwig while she presented last night: ‘We live in a time when now, more than ever, we need to understand the importance of what is real, authentic, and what is fact.’”

Letter grade: A-
Miller is partner and chief creative strategist for E=mc² Events, an event management company with offices in Toronto, Vancouver, and Calgary. Clients have included P.C.M.A., Microsoft, the Toronto International Film Festival, and the Juno Awards.

Michael Chen
“The Academy Awards has always been an opportunity for viewers to celebrate the year's biggest movies, fashion on the red carpet, and the glamour of Hollywood. Being the 90th anniversary, the production was definitely elevated through the elegant stage design featuring 45 million Swarovski crystals and the use of dynamic stage sets and LED panels to transition between performances and presenters. It also was extremely clever how they utilized stage lighting and reflection on the crystals to organically transform the stage colors throughout the show.

Despite not having an opening act this year, Jimmy Kimmel delivered a witty monologue setting the stage for the evening by making light of last year's controversial moment and addressing this year's platform for various important movements in the industry and world today. The jet ski prize and movie theater surprise were highlights as I appreciate the clever inclusion of spontaneous and light-hearted engagements to help humanize the actors and add comedic relief to a long show. I also enjoyed the thoughtful video collages played before each category highlighting previous winners.

Overall, the show moved along very smoothly and felt cohesive. There was a good balance of humor, great performances, and important dialogue that celebrated change, equality, and cultural diversity, paving the way for the years to come.”

Letter grade: A
Chen is the senior producer at AgencyEA, a Chicago-based brand experience agency. Clients have included Hilton, Target, Under Armour, McDonald’s, and Topshop.