Athletes are, naturally, a big part of the ESPY Awards, ESPN's annual "Excellence in Sports Performance Yearly" honors, making appearances at various events and promotions. However, this year sportsmen also figured prominently in the decor for the parties before and after the ceremony, visuals incorporated into both gatherings through projections, videos, and still images. Overseeing the affairs was Timi Jordan, ESPN's New York-based director of event marketing.

Previously a more private, relatively small event, the pre-party for the ESPYs was this year combined with the celebration for ESPN the Magazine's Body issue, which expanded the guest list and the number of sponsors. DNA Events was charged with producing the 1,200-person reception at the Belasco Theater and took cues from the form-focused issue. Naked athletic bodies covered the walls via mapped projections, enlarged magazine covers, and video imagery that moved from screen to screen.

The production team also looked for unusual ways to integrate the sponsors. For instance, the section for GNC had a rug printed with the health retailer's taglines, adhesive wallpaper printed with its ads, and two 10- by 10-foot backdrops for interviews constructed from GNC supplement bottles.

Other references to sports were made through the server outfits and the catering. Female waitstaff with pompadour hairstyles wore cheerleader skirts and tops marked with the event's logo, while a food station styled after a golf course held powdered doughnuts placed on tees.

The following night at the ESPYs after-party, ESPN hosted some 3,000 guests at the JW Marriot L.A. Live. For this event, the visuals were partially influenced by the campaign for this year's awards, the 20 most memorable moments in sports, with videos and still images of such decorating the walls of the diamond ballroom. Elsewhere, producer and designer Precision Event Group used lighting, different flooring, patterned fabric on the walls, and modern furnishings to give the site a different spin. One of the central scenic elements was a trilevel bar structure, which was marked with the logos for the awards and post party sponsor, Miller 64. 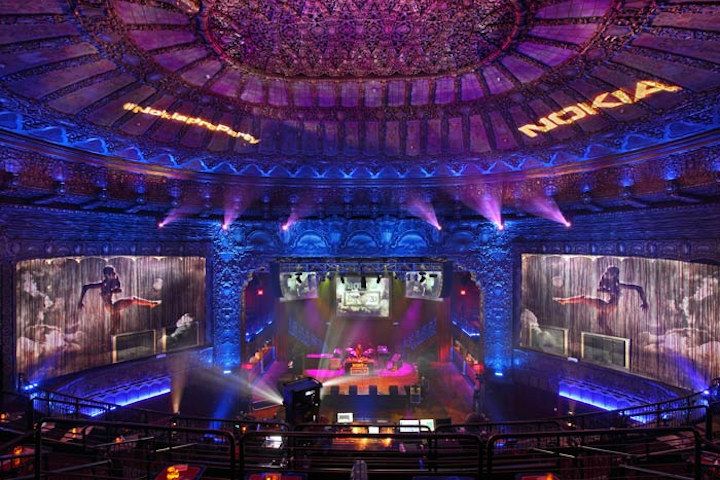 In the Belasco's theater, DNA linked five separate screens together by having content transition from one screen to the next, creating what felt like one projection surface with moving video images. The stage was used for performances by R&B singer Miguel and rapper Big K.R.I.T.; former N.F.L. player Eddie George also provided music as the DJ.
Photo: Line 8 Photography. All Rights Reserved. 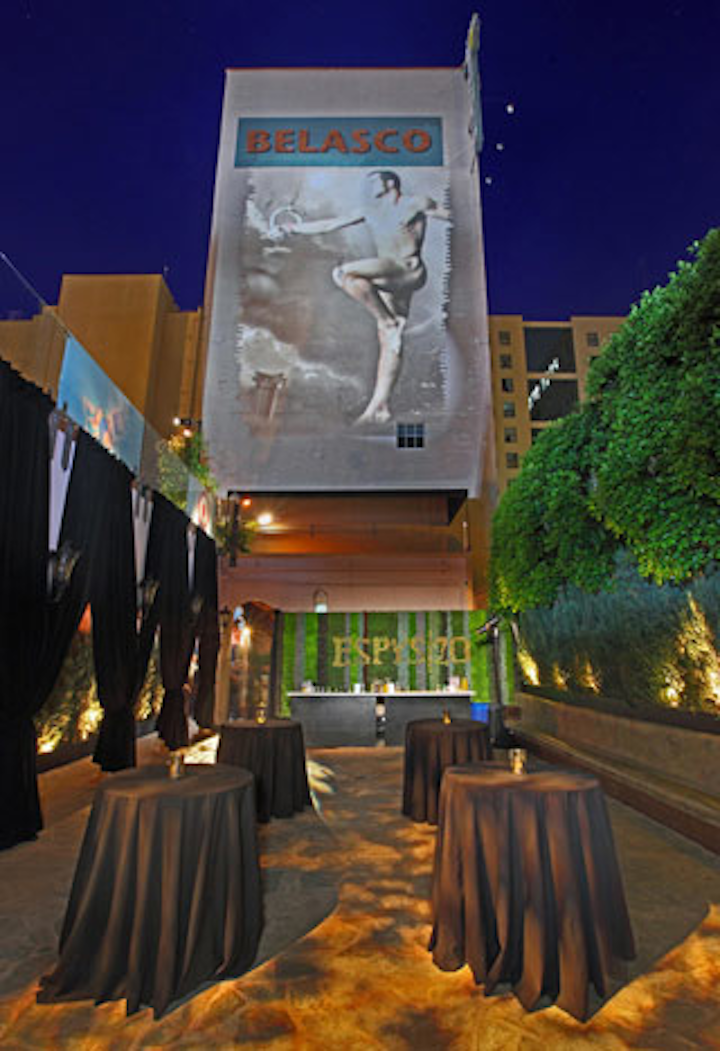 The night before the awards, Tuesday, July 10, ESPN held court at the Belasco Theater, combining the celebration of its annual Body Issue with the ESPYs pre-party. DNA Events used 3-D mapping to project athletic images onto a four-story exterior wall. The dramatic visual was complemented by 10- by 12-foot living wall of succulents, which had the event's logo embedded and served as the backdrop for the patio bar.
Photo: Line 8 Photography. All Rights Reserved. 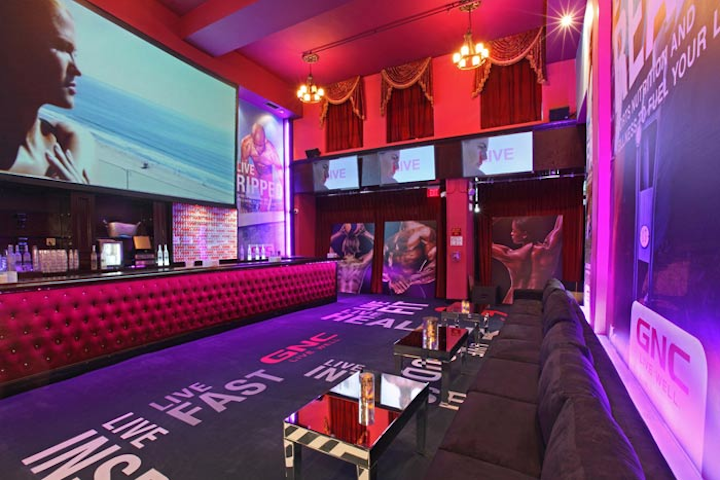 As the event combined what had in past years been two separate affairs, there were more sponsors to incorporate into the visuals. In the area for GNC, the producers applied adhesive wallpaper, commissioned a custom rug marked with the brand's slogans, and installed two 10- by 10-foot backdrops for interviews using GNC supplement bottles.
Photo: Line 8 Photography. All Rights Reserved. 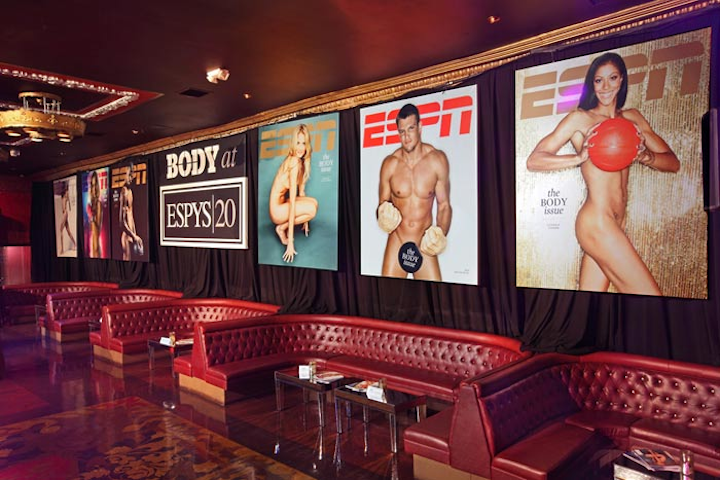 Using every corner of the 40,000-square-foot venue, ESPN placed enlarged images of the Body issue covers on the walls in the upstairs ballroom, which served as a lounge for sponsors.
Photo: Line 8 Photography. All Rights Reserved. 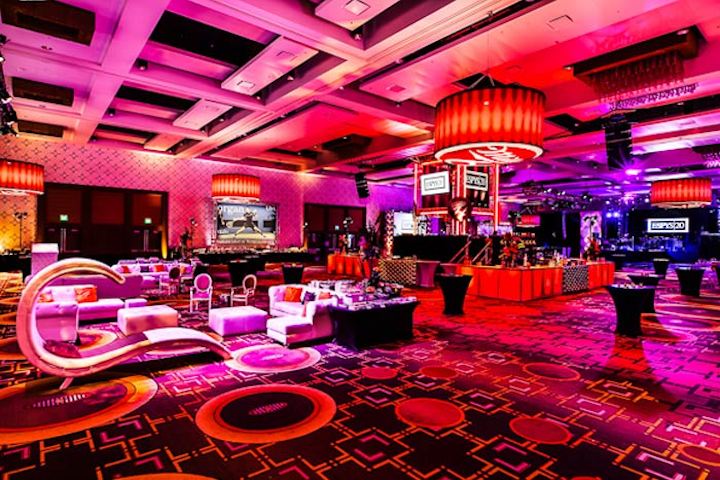 Following the award ceremony at the Nokia Theatre, ESPN held its after-party at JW Marriott L.A. Live. To give the hotel's ballroom a different look, Precision Event Group installed custom chandeliers and used lighting and a variety of flooring to break up the patterned carpet.
Photo: Dale Wilcox/DWP 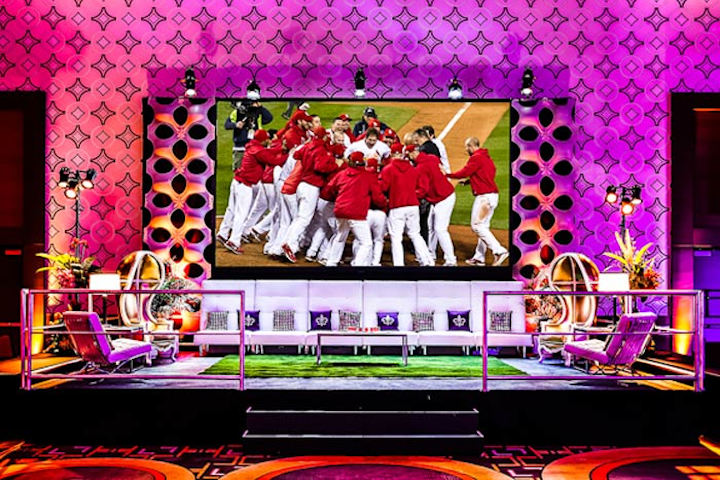 Building on the campaign for this year's ESPY Awards that highlighted the 20 "most memorable moments," the producers used video and still imagery as part of the event's decor.
Photo: Dale Wilcox/DWP 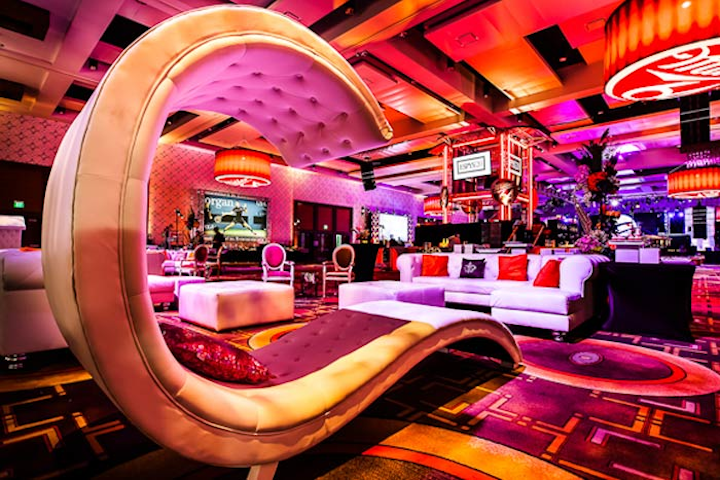 Other elements used by the production and design team to give the ballroom a new look included modern furnishings in gold, white, black, and red. An outdoor space was turned into a beer garden.
Photo: Dale Wilcox/DWP 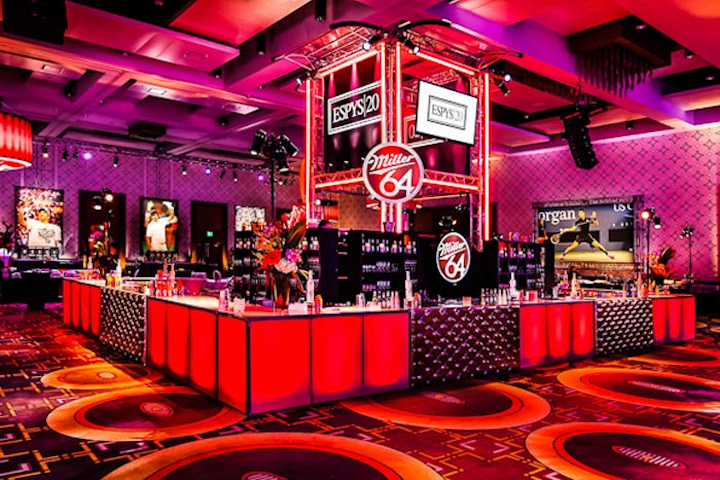 One of the central scenic elements was a trilevel bar structure, which was marked with the logos for the awards and post-party sponsor, Miller 64.
Photo: Dale Wilcox/DWP 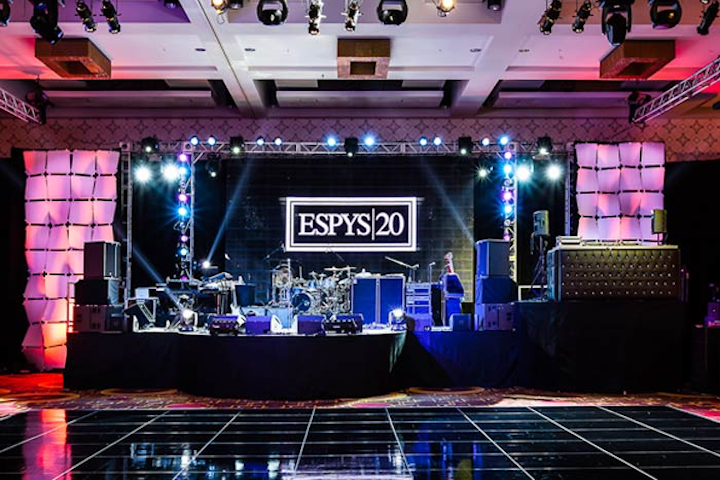 A stage was used for the performance by Lauryn Hill. Other musical entertainment was provided by DJ Biz Markie.
Photo: Dale Wilcox/DWP
More in Event Production & Fabrication