See How This Designer Threw a Dinner Party in the Desert 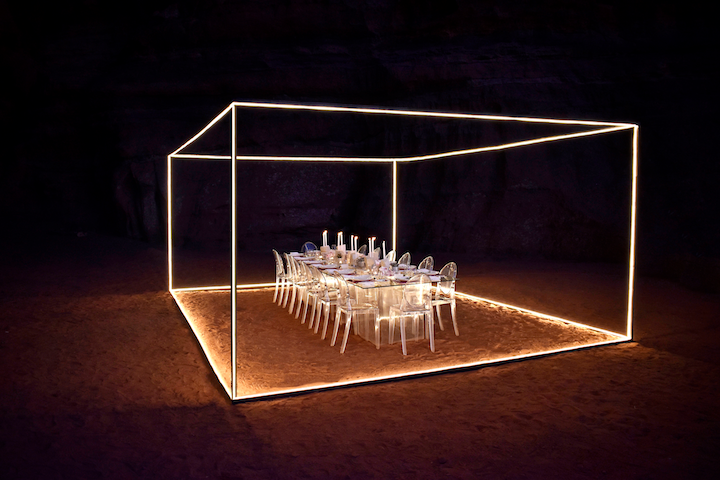 The illuminated steel structure measured almost 15 feet wide, 20 feet long, and eight feet high, with a transparent table set for 14 in the center. The LED lights strung along the frame lit the space for the evening.
Photo: Courtesy of Nafsika Skourti

“I wanted to create an invisible structure in the midst of magnificent nature, one that was only discernible when it was illuminated,” explained Nafsika who, along with her sister Stephanie Skourti, runs her eponymous fashion label. “I wanted to showcase the majestic landscape of Jordan and bring visitors close to the source of what is exceptional in this land. The pure elements of breathtaking scenery, warmth, hospitality, and ancient cuisine. All I needed to do was add a neon frame and some orchids.”

To make it happen, the sisters joined with the Jordan Tourism Board to host their first press trip, which included international journalists, stylists, photographers, and influencers from the U.S. and Europe. As for the July 26 dinner, guests were only told that they would be going into the desert and that they should wear black tie. On site, they were given luxe Nafsika Skourti pieces to don. After traveling into the Wadi Rum desert in southern Jordan via pickup trucks, guests were greeted by an oud player and the glowing neon box, a strong contrast against the soft sands of the landscape. The steel structure measured almost 15 feet wide, 20 feet long, and eight feet high, with a transparent table set for 14 in the center. The LED lights strung along the frame lit the space for the evening.

But how do you build a dining room in the middle of the desert? 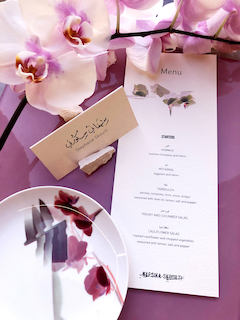 Guests dined on Jordanian mezze and the traditional Bedouin meal called zarb.Photo: Courtesy of Nafsika Skourti“This was definitely no easy feat. To throw a dinner between two canyons in the literal middle of nowhere is exactly how it sounds—nearly impossible,” the duo explained. “We worked with a local Bedouin tribe from the region that helped us figure out many of the logistical aspects and helped us find this special location. We had to bring everything in for the dinner—from decor, the generators, food, and more…. Alcohol is also not the easiest to navigate with the Bedouin tribes, so we had to also find someone who was able to pour alcohol for us.” (Traditionally, Bedouins are devout Muslims and don’t drink alcohol.)

The space’s soft mauve tablescape featured customized plates with gilded flatware by the Tabletop Company, centerpieces made from desert rocks, and towering white and pink orchids. Guests dined on a traditional Bedouin meal called zarb, which is a meal prepared underground in ovens.

“I hope that the memory of Wadi Rum will be vivid in the minds of my guests for many years to come. The reds of the rocks, the serenity of the desert and the stars,” Nafsika said. “Through experiencing the Bedouin traditions through our guidance, I believe we were able to understand deeper the true value of our region and the commonality of our human experience.” 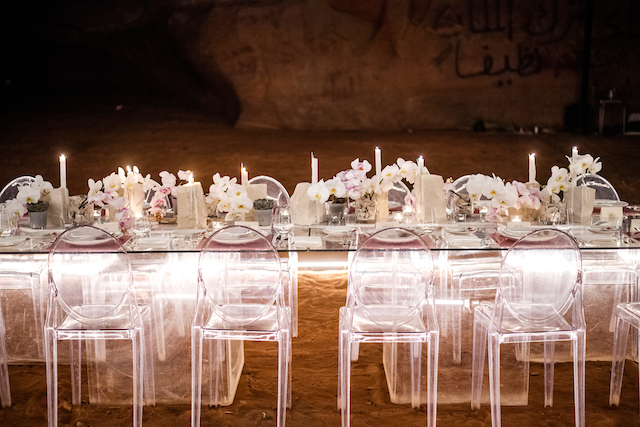 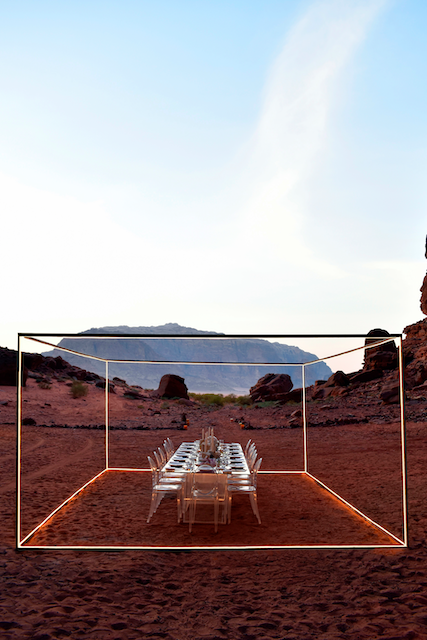 Nafsika and Stephanie Skourti worked with the region's Bedouin tribes to set up the space.Photo: Courtesy of Nafsika Skourti