After a 27-year absence, Italian car company Fiat is looking to reintroduce its brand in the U.S. Following the pop-up gallery it produced during the New York International Auto Show in April, the car maker opted to build a large consumer campaign to ramp up awareness and buzz for the 2012 Fiat 500, a remake of a model that originally debuted in 1957. Based around an ad campaign launched August 1, Fiat brought a fleet of the small autos to Times Square and used the Fox screen on the north façade of One Times Square to create an urban-style drive-in movie experience on Saturday and Sunday.

Starting at 10 a.m. on Saturday and, due to the rain, noon on Sunday, the public promotion drew hundreds to the pedestrian plaza beside Military Island, where they could check out one of 36 parked Fiat 500 and 500 Cabrio cars, watch one of the featured films—including Ever After, Baz Luhrmann's Romeo + Juliet, and The League of Extraordinary Gentlemen—play a round of boccie ball, or grab some free food and drink.

"The Fiat brand is uniquely Italian, and this event isn't just about a product—it's about a lifestyle," said Laura Soave, head of Fiat Brand North America. "Italians take the time to enjoy things, so we have boccie, we have free espresso and gelato, and people can sit inside the Fiat 500. For us, it's about providing an experience for them to talk about and tell their friends about."

The concept for the activation, which took over the entire pedestrian plaza, was to blend ideas that are iconic to Americans—drive-in theaters and Times Square—with traditional Italian elements. As such, the promotion included an alfresco café-style setup, with chairs and umbrellas, two sleek bars serving Lavazza coffee, tiramisu and limoncello from Solo Italia, Harry & David chocolate bars, Ciao Bella gelato, and mineral water from Ferrarelle. There were also the boccie ball court and a small stage area for the DJs and bands that supplied music when a movie wasn't playing. And as a reference to the new car being a modernized version of a model the brand considers symbolic of its history and style, Fiat specifically chose films that are remakes of classic stories.

Although Soave said the Times Square event was small in terms of space, she explained the effort was one of the brand's biggest from an awareness campaign perspective. Indeed, the drive-in experience, part of Fiat's "Simply More by Fiat" ad campaign, will travel to other cities in the next month, including stops in Chicago this weekend, Miami from August 26 to 28, and Los Angeles from September 3 to 5. 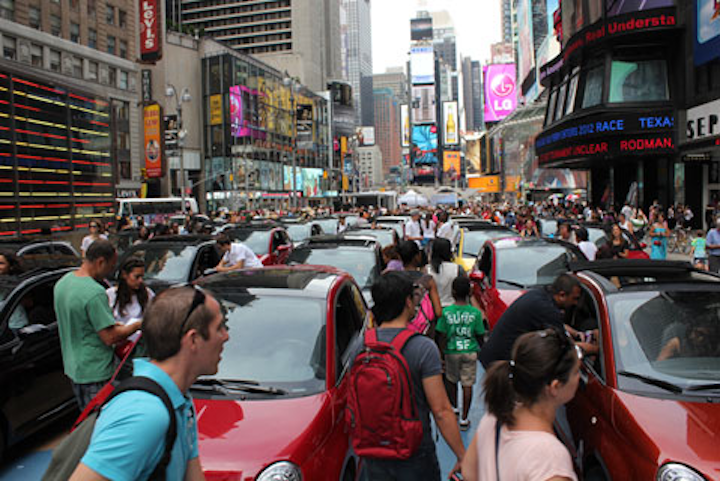 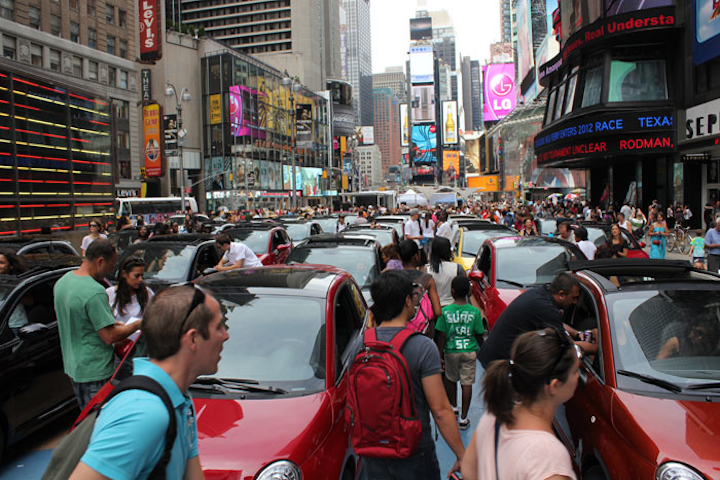 In the pedestrian plaza that runs alongside Times Square's Military Island, Fiat parked three dozen of its 500 and 500 Cabrio model cars for the "Simply More by Fiat" drive-in promotion this past weekend.
Photo: BizBash 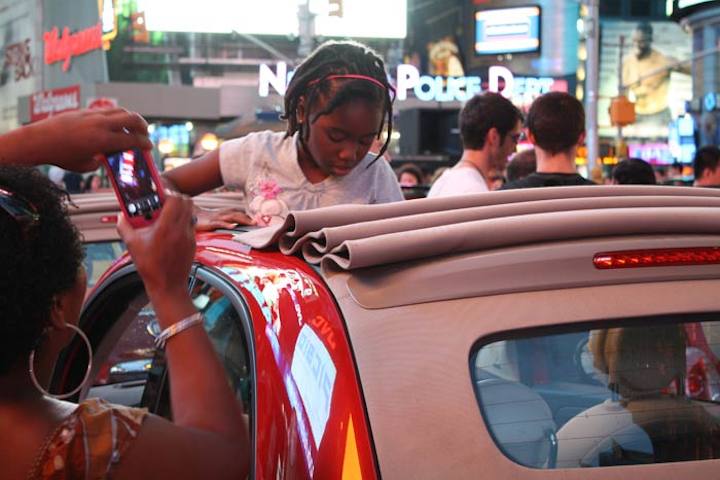 The event invited consumers to climb into the parked cars and check out the subcompacts' built-in features.
Photo: Ryan Nolan/Courtesy of Fiat Brand North America 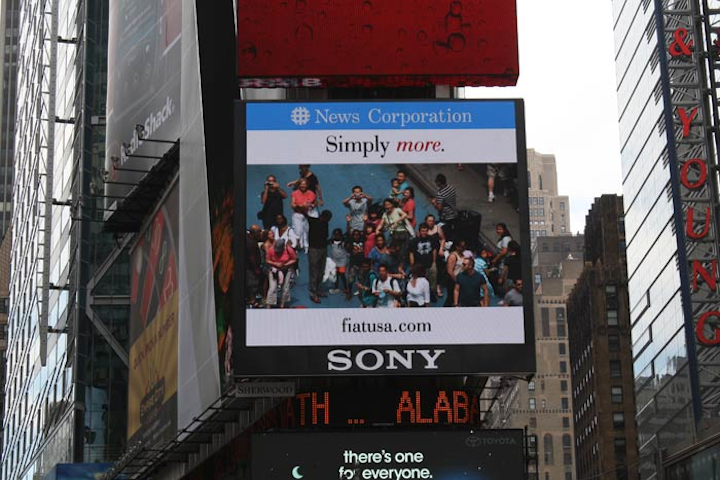 Using the Fox screen on the north facade of One Times Square, Fiat broadcast films including Ever After, Baz Luhrmann's Romeo Juliet, and
Photo: Ryan Nolan/Courtesy of Fiat Brand North America 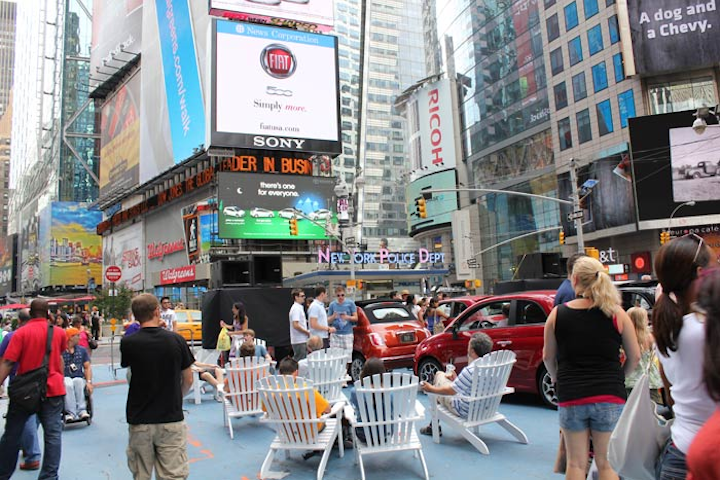 To create a drive-in, all the vehicles faced the screen and consumers could also watch the movies from comfy lawn chairs.
Photo: BizBash 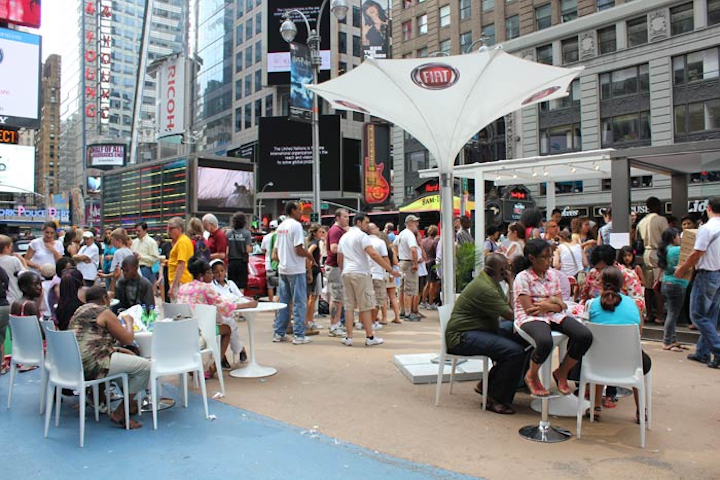 Behind the fleet of cars, the promotion offered an alfreso café-like setting, replete with white and red chairs, tables, and branded umbrellas.
Photo: BizBash 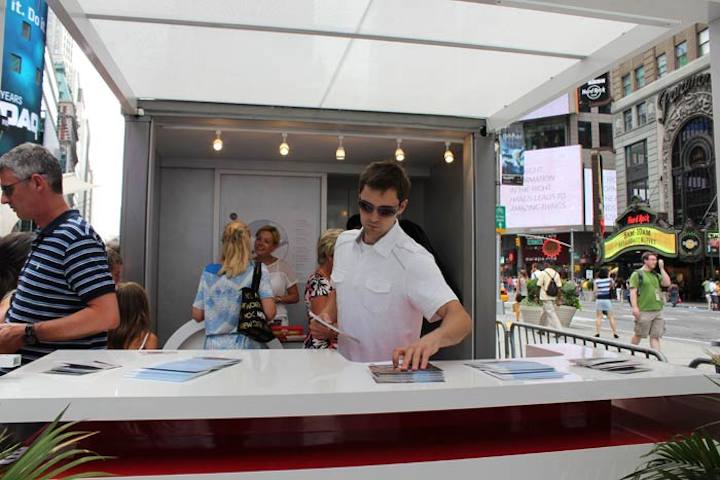 A sleek structure, similar to the type of booths found at auto shows, housed two bars where Fiat distributed free food and drink and information on its vehicles.
Photo: BizBash 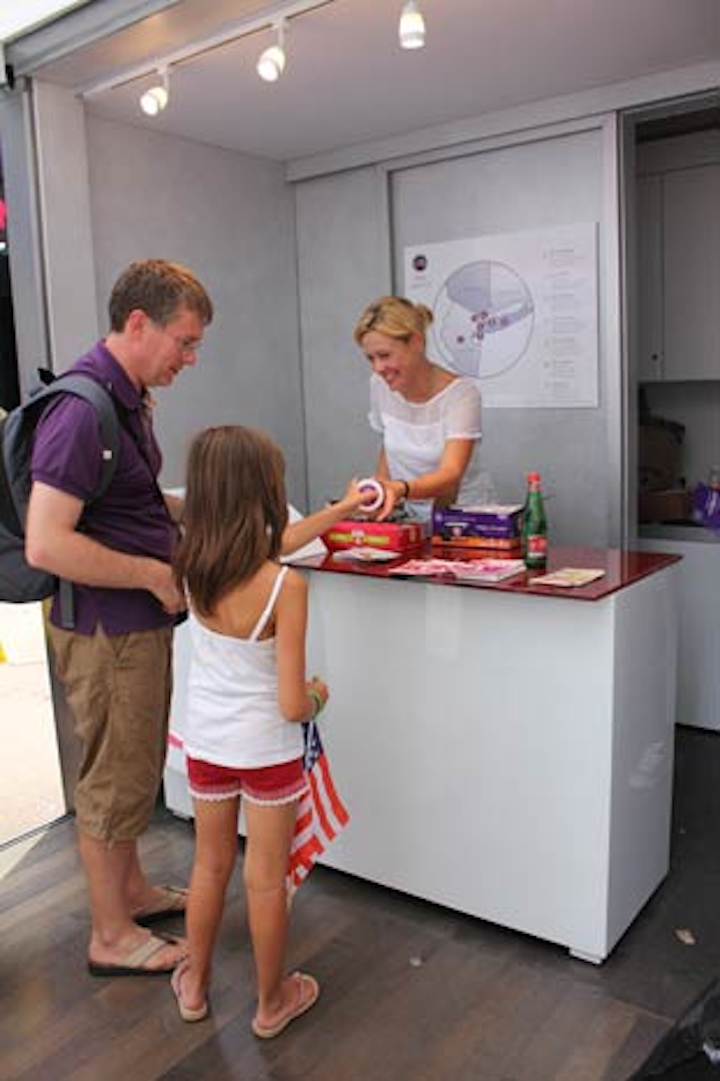 In a nod to Fiat's Italian heritage, the public event served items like gelato, espresso, and tiramisu.
Photo: BizBash 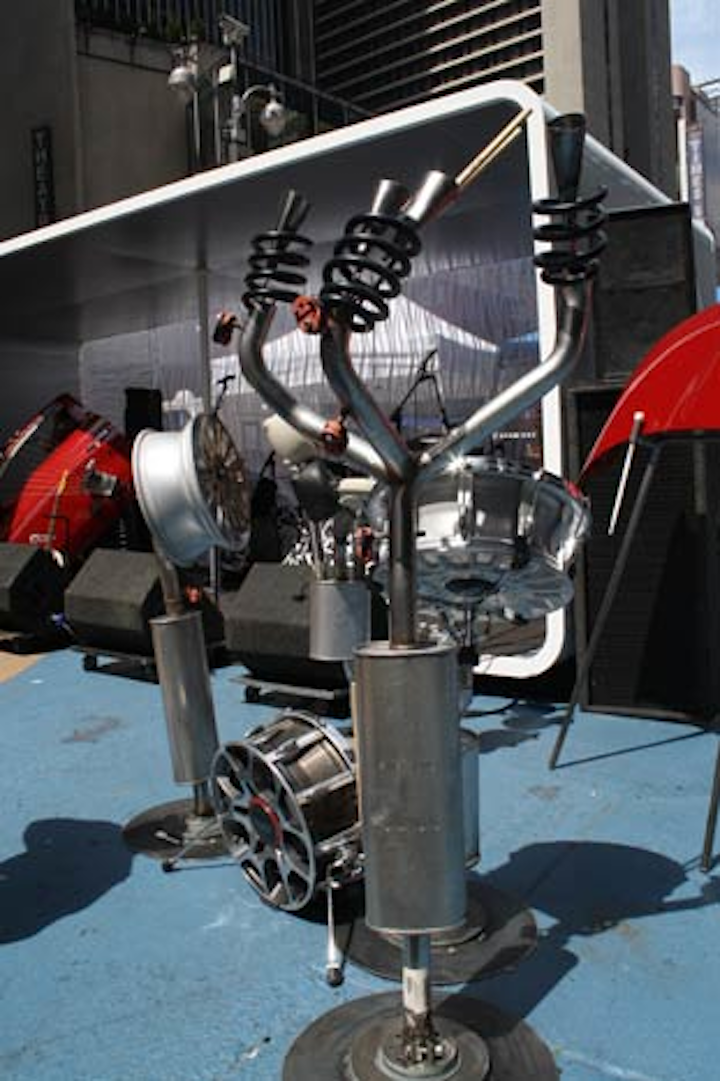 As a fun visual element, sculptures made from car parts and designed to resemble musical instruments stood in and around a small stage area at the northern end of the pedestrian plaza.
Photo: Ryan Nolan/Courtesy of Fiat Brand North America 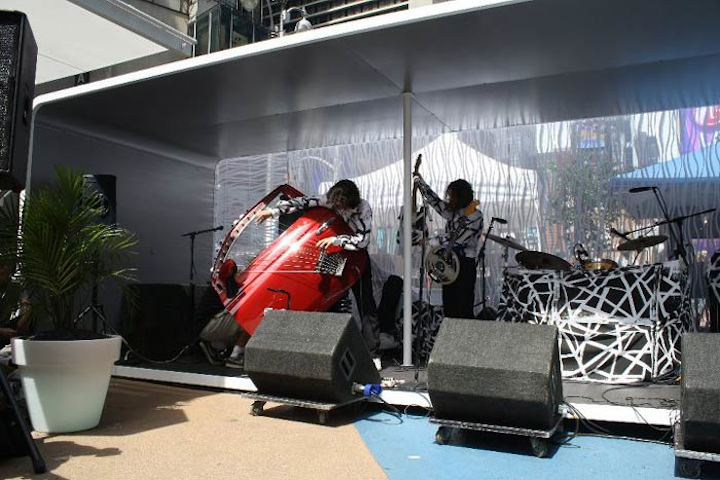 When not playing films, Fiat provided musical entertainment for guests, with sets from DJs and bands including the Stepkids (pictured).
Photo: Ryan Nolan/Courtesy of Fiat Brand North America 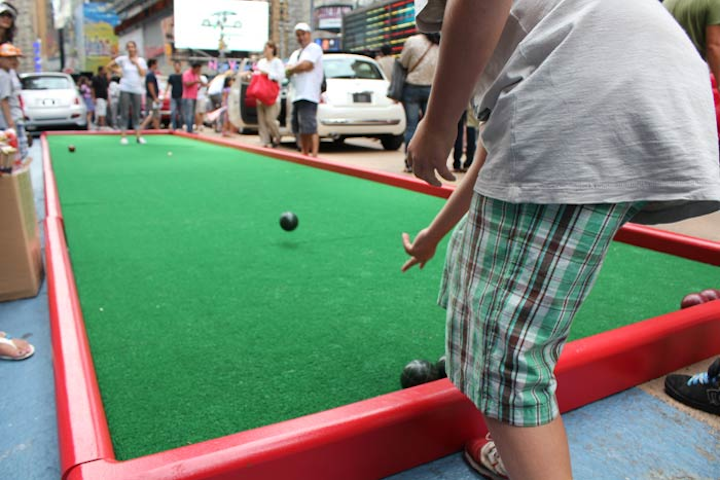 To occupy kids while their parents inspected the cars, a boccie ball court was set up in the plaza.
Photo: BizBash 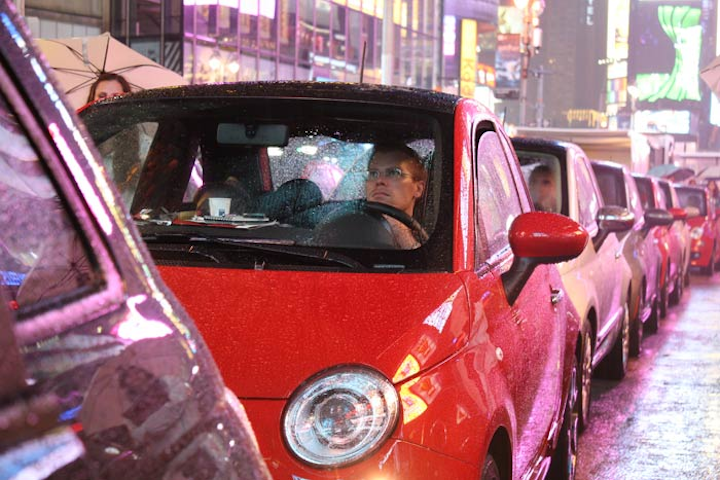 Despite Sunday's rainy weather, Fiat kept the promotion going and passersby were only too happy to sit inside the cars to get out of the downpour.
Photo: Ryan Nolan/Courtesy of Fiat Brand North America
More in Experiential, Activations & Sponsorships