See How Lexus Made Its Mark on New York Fashion Week

With inspiration from Nike Air Force 1 sneakers, the collaboration with designer John Elliott appealed to the millennial streetwear market.

During New York Fashion Week, Lexus took street style to the streets, literally, debuting “Sole of the UX,” a one-off version of its UX compact crossover in collaboration with John Elliott at the menswear designer’s after-party on February 9. Held at the Brooklyn Navy Yard and produced by Bureau Betak, the unlikely design inspiration—a pair of Elliott’s Nike Air Force 1 sneakers, to be exact—resulted in an Instagram-friendly showpiece that speaks loudly and distinctly to the millennial streetwear market.

Following the designer’s fashion show, which used the warehouse home to FullStack Modular, and where guests sat on customized milk crates and the DJ performed from within one of the larger transportable structures, guests were able to get an up-close-and-personal view of the Lexus UX, via the static display. The design details of the unique tires were not lost on the sneaker-savvy crowd, including Patrick Schwarzenegger, Nick Young, Victor Cruz: white-on-white layers, double-stitched leather, and a stepped metal air valve reflective of Elliott’s stacked metal lace tip.

And because the goal was to highlight the car and tires, not to mention the sneakers, all other materials were kept in all-white or translucent. Lexus wanted the hero pieces to quite literally glow.

“We were excited to merge the streetwear narrative and design cues of our Air Force 1 with a brand like Lexus. We’re thankful they’ve allowed us to use this moment to celebrate the arts and to bring extra energy to our take on a classic,” said Elliott. “It’s fun to partner with brands that typically live outside the fashion community because it allows us to evolve and continue to push our own boundaries.”

Additionally at the event, Elliott showcased unique iterations of the John Elliott x Nike AF1 by artists Actual Source, Hassan Rahim, Matt McCormick, and Yung Jake—all pioneers in their respective fields. Using the John Elliott x Nike AF1 as their canvases, these one-of-a-kind sneakers were auctioned off at the event with proceeds benefiting Inner-City Arts, an organization based in downtown Los Angeles (Elliott’s hometown) with a mission to provide access to arts education for the city's most underserved youth. Also adding a touch of the L.A. spirit to New York was the evening’s specialty Don Julio Blanco tequila drink, dubbed “Melrose,” made with lime juice, agave nectar, and jalapeño.

“The first-ever Lexus UX was engineered and designed for the city,” said Lisa Materazzo, Lexus vice president of marketing. “We wanted to push that concept even further by creating the ultimate homage to urban style: tires inspired by classic, street-style sneakers.”

“Sole of the UX” will make additional appearances throughout the country this year, including most likely at the Intersect by Lexus design and dining hub in the meatpacking district during the New York Auto Show in April. 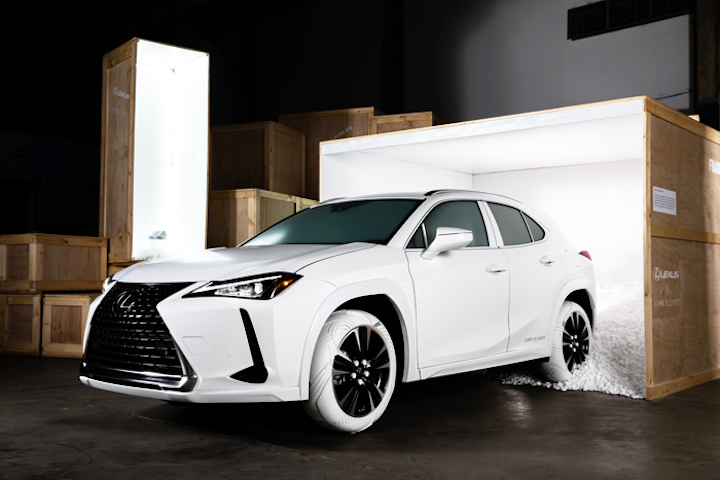 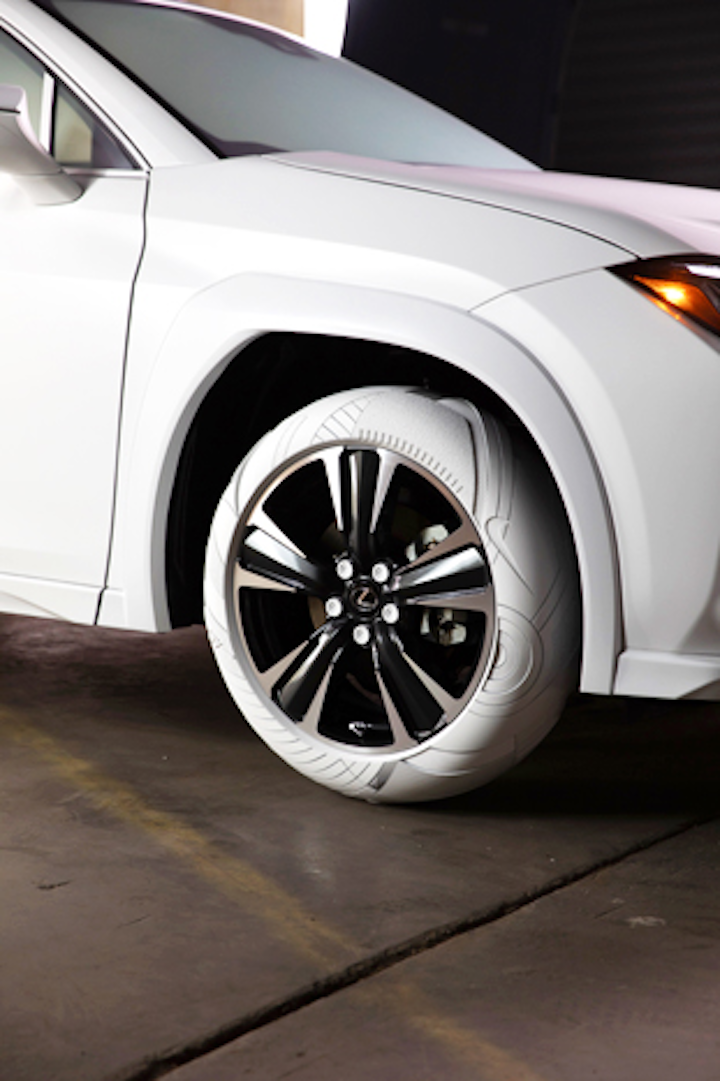 Featuring custom John Elliott branding against a unique matte white wrap, the car was staged to appear "mid-unload," backlit and surrounded by tens of thousands of pieces of packing styrofoam.
Photo: Courtesy of Lexus 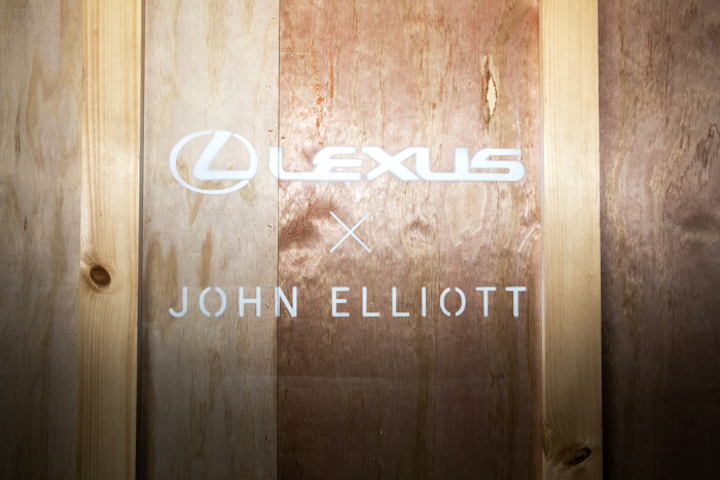 To further the raw, "in transit" aesthetic of the display, large wooden shipping crates surrounded the Lexus UX. Stencil-sprayed logos from both brands were featured throughout the setup almost as a subtle step-and-repeat.
Photo: Courtesy of Lexus 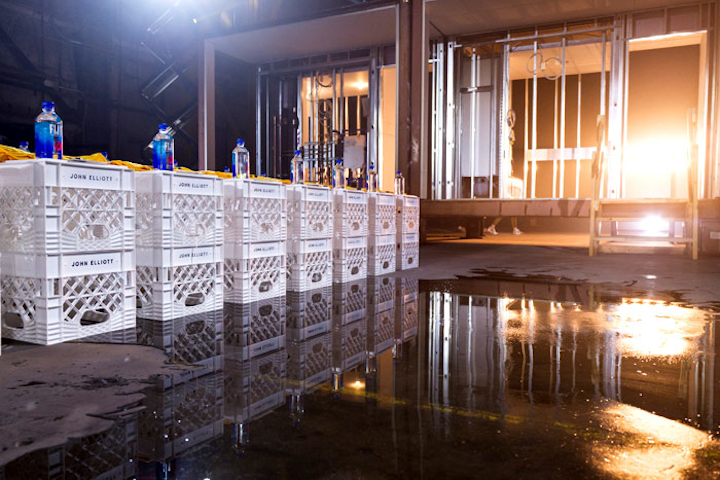 Prior to the official Lexus UX reveal, guests took in the John Elliott Fall 2019 show at the Brooklyn Navy Yard from their seats on custom-branded milk crates. Each seat bore a special T-shirt commemorating the season while the runway had a distinctly vacant and warehouse-like feel. Directly adjacent, the after-party DJ was housed inside a modular home by Full Stock Modular, whose warehouse the event occupied.
Photo: David X Prutting/BFA.com 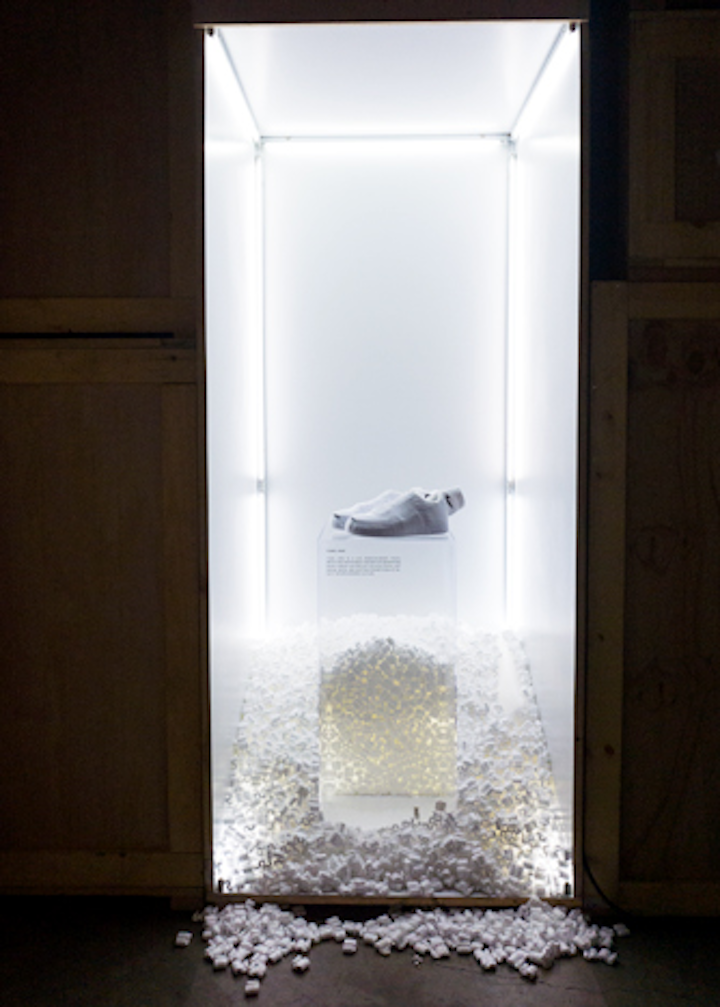 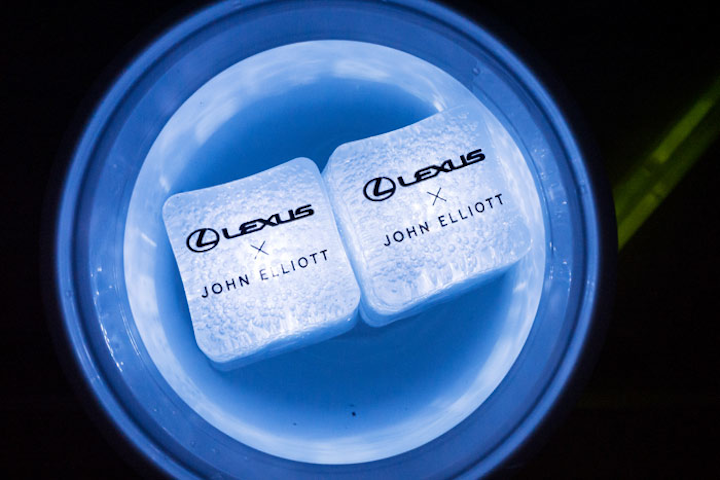 In a touch of whimsy, and to provide some illumination in the otherwise dark warehouse after-party, custom LED light-up ice cubes bore the logos of Lexus and John Elliott as a playful, and Instagrammable, nod to the event.
Photo: David X Prutting/BFA.com
More in Experiential, Activations & Sponsorships