For the social media giant’s new out-of-home campaign, it displayed real tweets in a subway station, in chalk stencils, and at its own candy store. 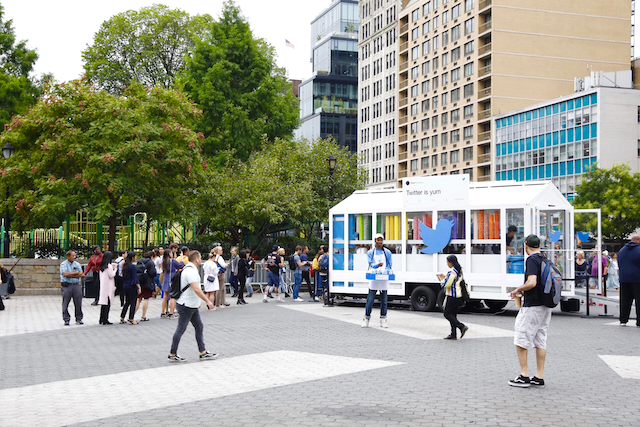 For its new out-of-home campaign, “Twitter Is,” the brand surprised passersby in New York with a pop-up candy shop, as well as subway and sidewalk takeovers in New York and San Francisco. The campaign is inspired by the question, “What is Twitter to you?” and incorporates more than 100 real tweets, rendered in labels at the candy shop, subway ads, and chalk stencils.

“It goes without saying that the core of Twitter’s power and spirit is driven by the people on the platform and the dynamic conversation they bring to the platform every day,” said Helen Stoddard, head of global events at Twitter. “So when we’re looking at ways to create events and experiences that manifest the spirit of Twitter in tangible ways—off the platform—we’re always thinking about staying true to our audience. ‘Twitter Is’ accomplishes that. We listened to our audience and put their real tweets at the center of this campaign, and it's their tweets about Twitter being ‘sweet’ and Twitter being a ‘candy shop’ that inspired us to do the pop-up candy shop in Union Square.”

Twitter tapped experiential marketing agency NA Collective to produce the candy shop, which was staged outside of the Union Square subway station for six hours on September 10. The shop, which was free for consumers, was housed in a transparent greenhouse-style trailer. Plastic dispensers were filled with popular candies like gummy peaches, chewy fish, and fruit slices, which were arranged by color. Guests were invited to take a bag and label it with their choice of sticker, all of which displayed tweets relating Twitter to candy.

Brand ambassadors wearing blue sweatshirts and aprons with the Twitter logo also handed out candy to passersby around the trailer.

Stoddard said that in the six hours the shop was open, brand ambassadors handed out more than 5,000 treats, and guests in the trailer filled their bags with around half a ton of candy; this included 500 gummy bear cubes, 1,000 swirl lollipops, 2,500 fortune cookies, 700 rock candy sticks, and 128 pounds of kettle corn.

The campaign wasn’t a surprise and delight moment for everyone, however. The sidewalk stencils in San Francisco, where the company is based, drew vandalism complaints from residents, with the city’s Public Works department saying the displays were illegal. Twitter later apologized, citing “breakdowns in the process” for meeting the city’s chalk stencil requirements.

Stoddard said Twitter may continue to execute consumer pop-ups in the future, surrounding “Twitter Is” or other campaigns, and that the brand definitely plans to maintain its presence at major events.

“We’ll definitely continue to find ways to manifest the platform in the real world, including at conferences like Cannes Lions and SXSW,” she said. “We have event spaces that we’ll be bringing to life in the next coming months, including one at C.E.S.”

Scroll down for highlights from Twitter’s pop-up candy shop and subway and sidewalk takeovers. 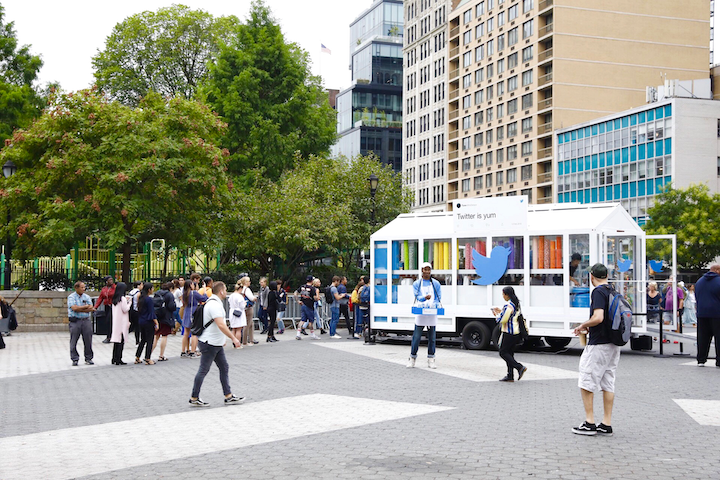 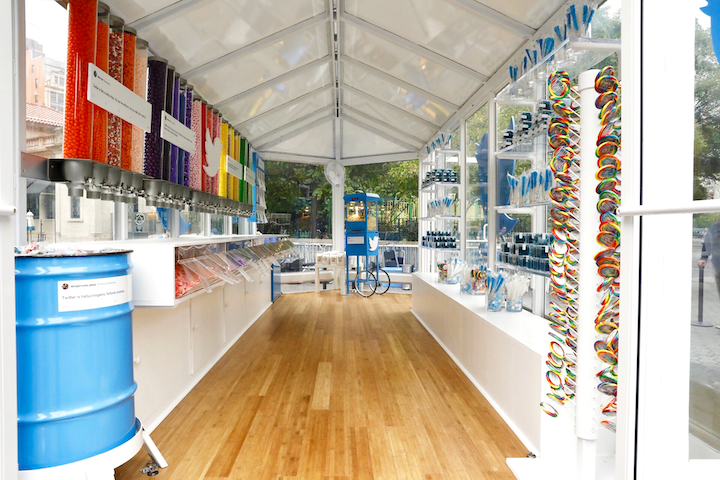 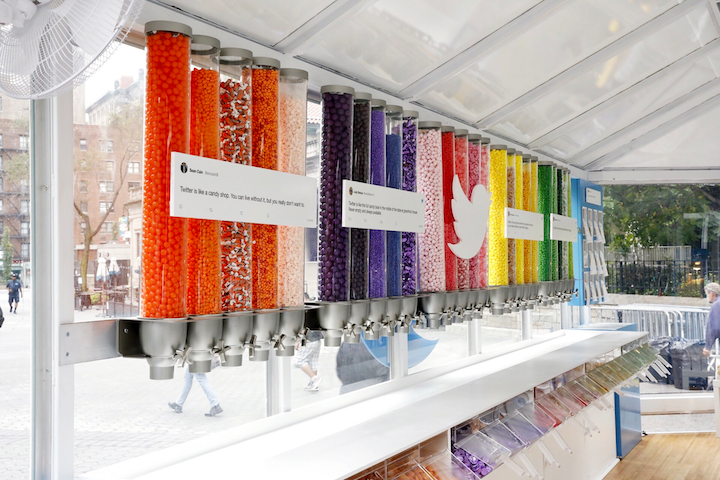 The candy dispensers were color coded, with a tweet corresponding to each color.
Photo: Jonathan Hokklo 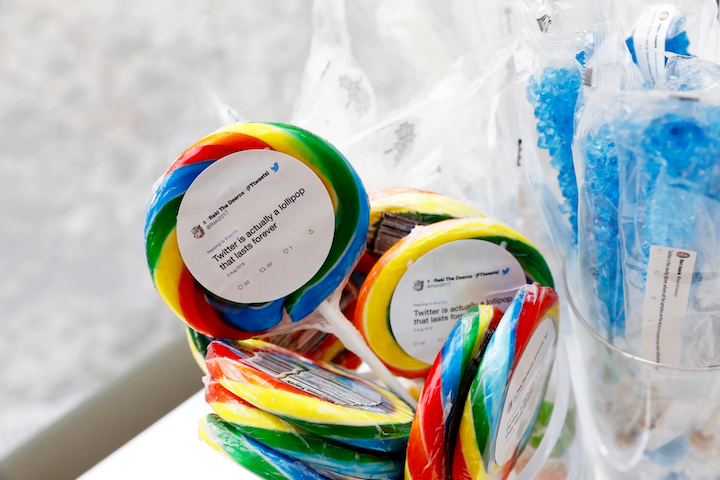 Tweets about Twitter as a metaphor for candy were printed on rainbow swirl lollipops, which also were sent to media in an invite to the pop-up.
Photo: Jonathan Hokklo 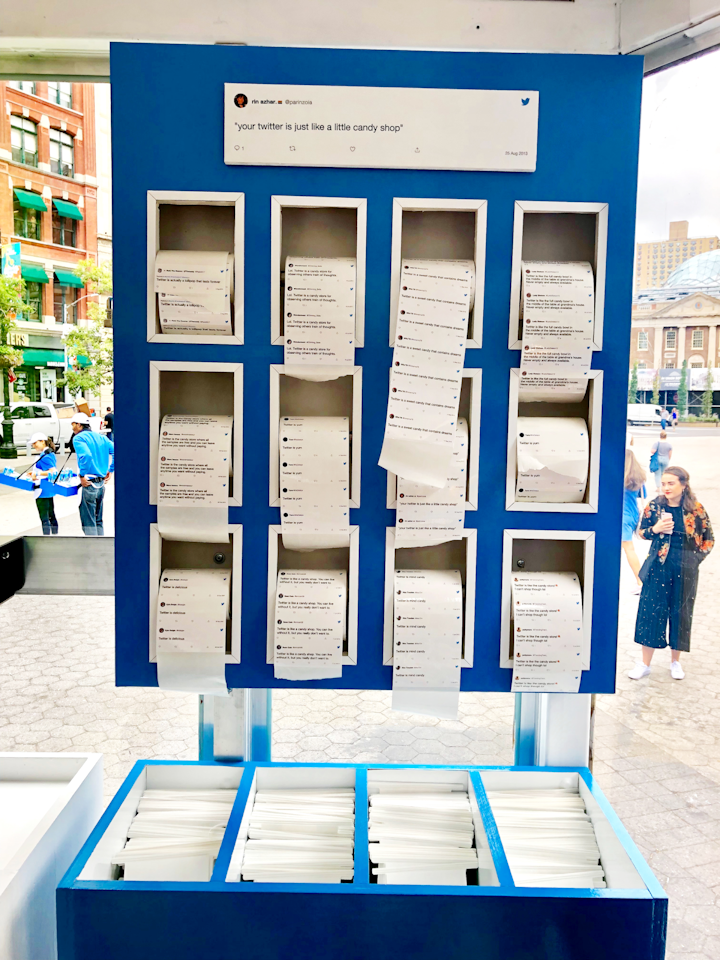 Guests could choose from a number of stickers with tweets to label their candy bags.
Photo: Ian Zelaya/BizBash 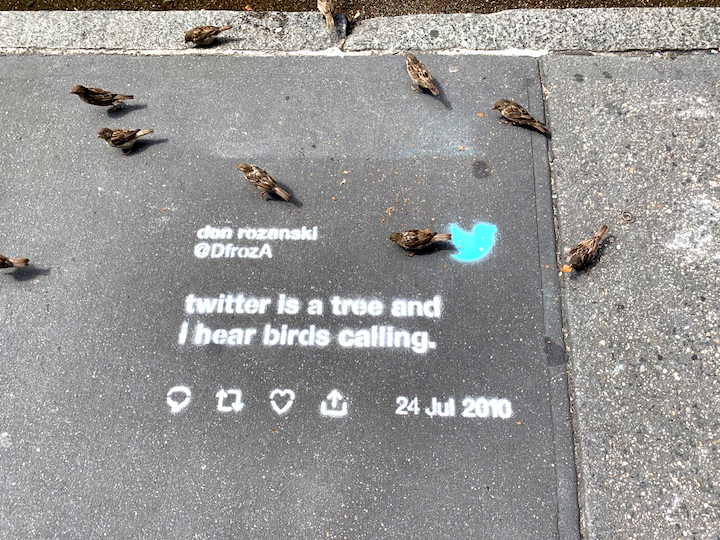 Aside from the candy shop, the campaign included real tweets plastered across sidewalks in New York and San Francisco. Some tweets were rendered in chalk stencils, which drew meta guest appearances from real birds.
Photo: Courtesy of Twitter 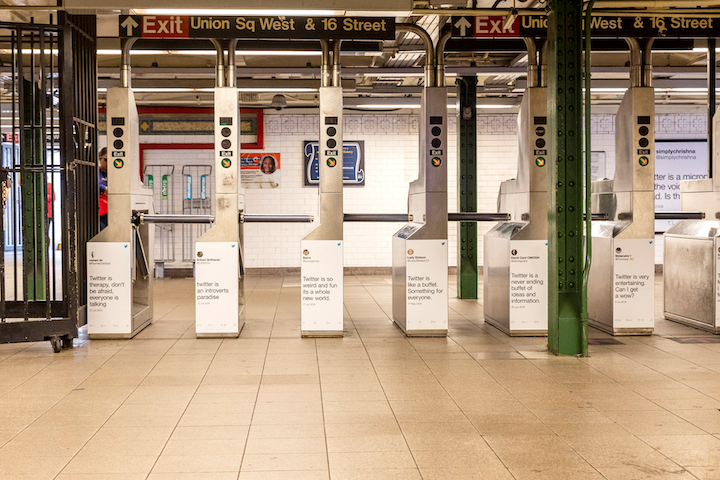